Continued from Part 1: Residents are leaving and taking their incomes with them

According to IRS data, the 250,000 residents who moved from Illinois in 2016 took $11 billion in adjusted gross incomes (AGI) with them to other states. In contrast, the 165,000 who moved into Illinois that year only brought with them $6.3 billion.

That left Illinois with a net loss of $4.8 billion in AGI and cost the state more than $100 million in lost tax income tax revenue.

Illinois’ AGI losses ranked it second worst in the nation in 2016. Only New York fared worse with a loss of $8.4 billion.

On the other hand, states winning residents as a result of state-to-state migration were also winners of a growing tax base. Florida increased its net AGI by $17 billion, the biggest winner of all. Other states like North Carolina, South Carolina, Washington and Texas gained AGI of more than $2 billion.

When put in per capita terms – better for apples-to-apples comparison with other states – Illinois lost $371 in AGI per capita in 2016. Only 5 states lost more AGI per capita: Connecticut, New York, New Jersey, Alaska and North Dakota.

Illinois’ losses in AGI have been going on long before 2016. In fact, Illinois has been one of the worst overall losers of AGI since 2007, the first year the IRS published summarized state AGI data.

Over that 2007-2016 period, no state has lost more AGI per capita to domestic out-migration except Connecticut, New Jersey, Alaska and New York.

But every year residents leave a state to the extent they are leaving Illinois, local economies take a hit, the tax base shrinks, and opportunity suffers.

And looking at just one year’s loss in AGI doesn’t show the full damage that’s been done. Every year Illinois loses people and income, the losses compound. In Part 3: $310 billion in accumulated losses from out-migration, we’ll look at that cumulative loss. 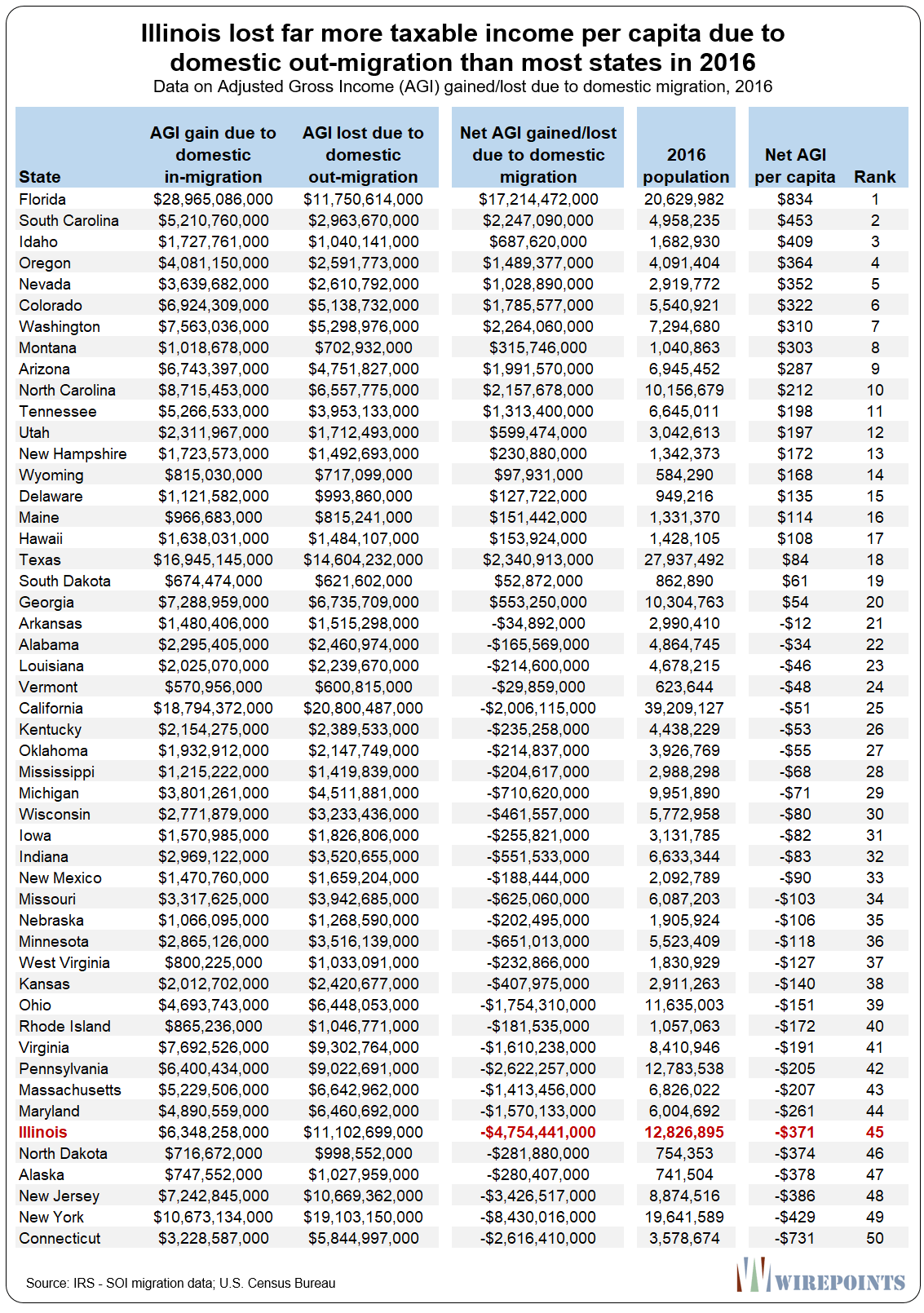 We just made it official, we are now proud residents of the Banana Belt in South Dakota. And while it may not be much by some standards, we took our 290K a year household income with us. Good riddance to Illinois, the worst place in the United States to raise a family. And just a point, it was not simply all about the money, it was more about the marijuana legalization, the expungement of the records of criminals(I am small business owner of multiple units of cash businesses), social and moral degeneracy taught in the schools, the immorality of public… Read more »

Hey JB, don’t hold back. What do you really think?
Seriously, congrats on getting out and I agree with what you wrote.

I keep finding myself going back to that Warren Buffet quote that basically tells businesses to avoid Illinois, yet he has also said the wealthy should pay more in Federal taxes. I think that says a lot about the disparity between Illinois and the rest of the country.

My wife was saying something similar the other day. “I’d like to see in 5 years how much the population of places like Terre Haute and Vincennes has gone up with all the people leaving Crawford County.”

I wonder if the serial down voters could find Crawford County on an Illinois map. The exodus is very real, folks.

California has a progressive income tax.

I’m sure the Illinois pols figure if California can have rates like these why can’t Illinois.

Exactly. California without it’s tech and movie industry would be a little more than an agriculture state with a handful of niche industries, like knife manufacturing and …what else is made in california? big farming state, but still a farming state. In fact, it kind of is like that, because there’s so much poverty and such wealth dispartity. It’s america’s first third world state, as VDH calls it.

And if you think Illinois -$371 AGI per person is bad………look at Connecticut at -$731 AGI (and the mixing of the same digits is haunting and freaky). The problems that Illinois has and will soon face are already paved by small state Connecticut. Please please please Connecticut. go bankrupt. The sooner the better. Once Connecticut fails then the entire bond market will realize that they are facing, in economic terms, “moral hazard’ and all loans to financially failing states and cities will immediately halt. Suddenly the credit card that Illinois, Chicago, Cook County have been living on along with dozens… Read more »

… and for those smart enough to get out ahead of the collapse, find a new state that constantly votes conservative. Those states generally don’t have a pension crisis. If you are a fleeing Illinois liberal, please be honest with yourself about why Illinois failed before voting in your new state. You can have a fresh start. Look to yourself for improving your life, not government. Others will respect you more and you will feel better about yourself. Successful people are not your enemy. We would like nothing better than for you to join us.

Fuck you and your inconvenience, thats peoples lives. Rot in hell you fucking republicunt.

-11
debtsor
Reply to  Chuck U. Farley

Oswego Willy? Is that you?

Most of the time the Illinois statistics bring me anger. Occasionally, I just feel sad. Some people I care about are still there. They voted consistently against the liberal/progressives, opted for private schools or home schooling, and contributed to their churches with money and time. In other words, they have acted responsibly and as good citizens. They don’t deserve what has happened or what is coming. I can only hope they get out soon, …. very soon. Wirepoints, when you conclude this multi part series of articles, I would appreciate a summary with a recommendation. It should recap in words… Read more »

IMHO, what will happen is that Illinois and Chicago will keep raising taxes no matter what. They will never voluntarily file for BK like they should, they will continue to go down the “Scorched Earth Death Spiral” democrat way. They won’t file BK since that will automatically hurt their Pensions/HC benefits. The problem lies with the majority voters being liberal and vote for Pro Corruption based on lies. They’ll never vote for right honorable republicans since they are told the GOP is racist.

True. Problem is that most of those who vote for these politicians/policies are recipients of those benefits. There are at least 800K active and retired public employees now add their spouses brings it to maybe 1.5M then add others in the household may add another 200K we are now at 1.7M. Add in those on public assistance like Medicaid/food stamps etc we are way over 2M. None of these will vote to cut their benefits. So even if everyone bands together to vote the pols out they are gerrymandered or redistricted in with political boundaries drawn plus many run opposed.… Read more »

“My idea is Republicans or Independents should have sham candidates run as Democrats promise everything to everyone just to get elected then vote Republican.”

Madigan did something similar to this and ran sham candidates to dilute the vote against him. My best guess is that this is what the feds are going to take him down for, some kind of election fraud.

The Republicans need to run totally as independents and vote conservative. And hope to eek out a few wins here or there. The Republican party in IL is toxic.

The democrats messed this place up! I can only hope people stop voting these people in.