Continued from Part 2: Loss in income is one of nation’s worst

Illinois is losing the state-to-state battle for people, and those losses are doing real damage to Illinois’ tax base and its economic vitality. Last year alone, Illinois netted a loss of 86,000 residents and that left the state with $4.8 billion less in taxable income. Only New York suffered bigger net outflows of income.

But the losses in 2018 weren’t just a one-time thing for Illinois. Wirepoints analyzed domestic migration data from the Internal Revenue Service data since 2000 and found Illinois netted annual losses of $1.4 billion to $4.8 billion in Adjusted Gross Income every single year during that 17-year period. 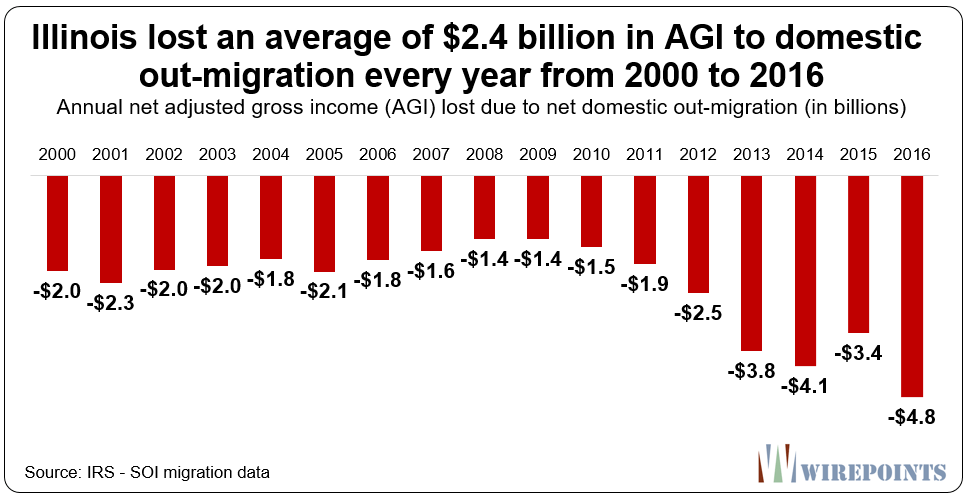 The problem with Illinois’ chronic outflows is that one year’s losses don’t only affect the tax base the year they leave, but they also hurt all subsequent years. The losses pile up on top of each other, year after year. And when you lose income to other states for 17 straight years, the numbers add up.

In 2016 alone, the latest year of data available from the IRS, Illinois would have had $40 billion more in AGI to tax had it not been for the state’s string of yearly losses in income. Based on data from the Illinois Department of Revenue, Wirepoints calculates the state lost out on as much as $1.2 billion in tax revenues that year as a result of that missing AGI.

Illinois’ AGI loss of $310 billion represents as much as $10 billion in lost income tax revenues over the 2000-2016 period.* That calculation is based on the average effective tax rate on the state’s AGI over the entire period. (See Methodology below for more details and information on the potential impact of retirees.)

Illinois’ losses are even more staggering when you compare them to what could have been. Imagine that instead of losing residents for years, Illinois had gained them. That would mean a bigger tax base and, everything else equal, lower average tax burdens on everybody.

To see what that looks like, take Tennessee, a state that’s made itself attractive to residents around the country. The Volunteer State has added an average of 20,000 net residents and $600 million in net AGI yearly to its economy since 2000. 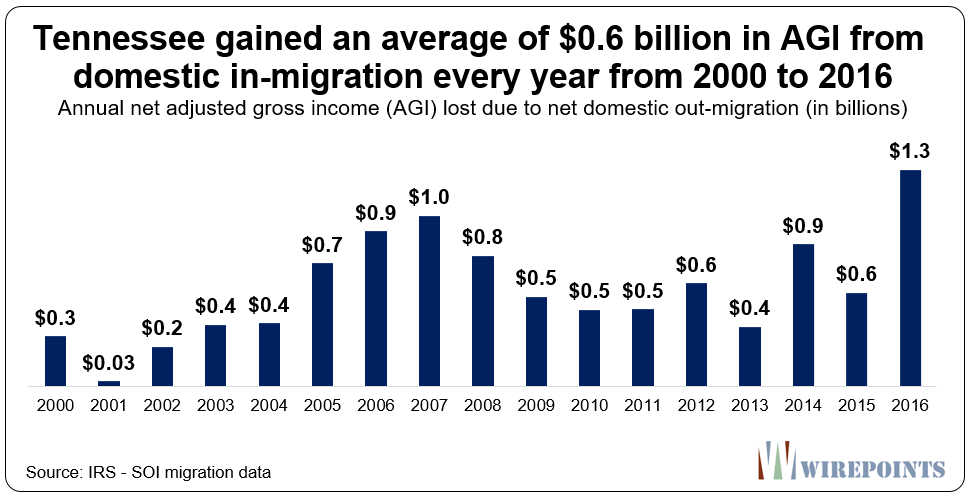 Some of the increases may be small, but that income still builds up over time. The new crop of residents and the incomes they bring with them are piled on top of what was accumulated in previous years. It’s a virtuous cycle where growth begets growth.

In all, Tennessee has accumulated $76 billion in additional AGI since 2000. Compared to Illinois, that number is even more impactful since Tennessee has half the population Illinois does.

Illinois is trapped in a vicious cycle of skyrocketing government costs and ever fewer people to pay for them. Illinois has shrunk five years in a row, Chicago has shrunk four, and that trend will only intensify as tax hikes, and not reforms, continue to be politicians’ only solution.

Gov. J.B. Pritzker’s progressive tax proposal is just the next step in that cycle. He and other tax proponents think that the wealthy will stay to pay for a 60 percent hike on their income taxes. And they must also assume that only young and poor residents leave Illinois. We’ll bust that myth in Part 4 of this series.

* It’s important to note that Illinois’ actual tax revenue losses are much higher than what the IRS data suggests. That’s because their work focuses only on income taxes and does not cover sales, property, license, gas and other taxes and fees.

Wirepoints calculates Illinois lost as much as $10 billion in income tax revenues over the 2000-2016 period due to AGI lost to domestic out-migration.

Wirepoints had to determine effective income tax rates based on the state’s AGI to estimate the amount of taxes lost because the IRS migration data only provides AGI, and not taxable income,

Wirepoints calculated effective tax rates by dividing each year’s tax revenues by that year’s AGI. IDOR data was only available for 2007-2016. The effective rates are provided below. 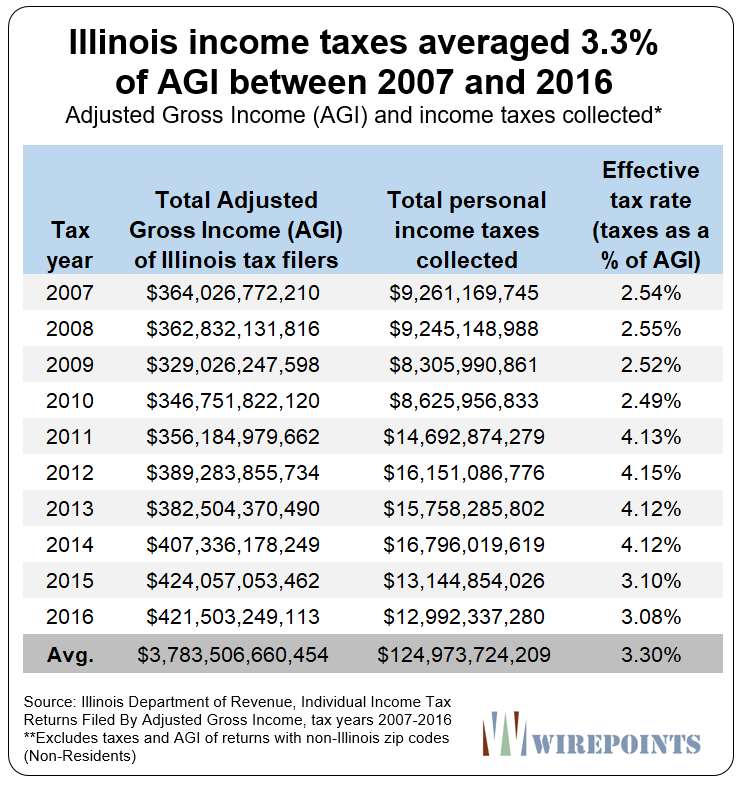 It should be noted that the effective tax rates are lower than Illinois’ statutory rates because AGI is before exemptions, deductions and Illinois’ retirement income exclusion is applied.

Wirepoints applied each year’s effective tax rate to the total cumulative AGI lost in each year. For the years 2000-2006 – for which IDOR data is not publicly available – we used a 2.5 percent rate based off of the rates in the 2007-2010 period.

Applying those effective tax rates resulted in a nearly $10 billion loss in tax revenue for Illinois over the 2000-2016 period. 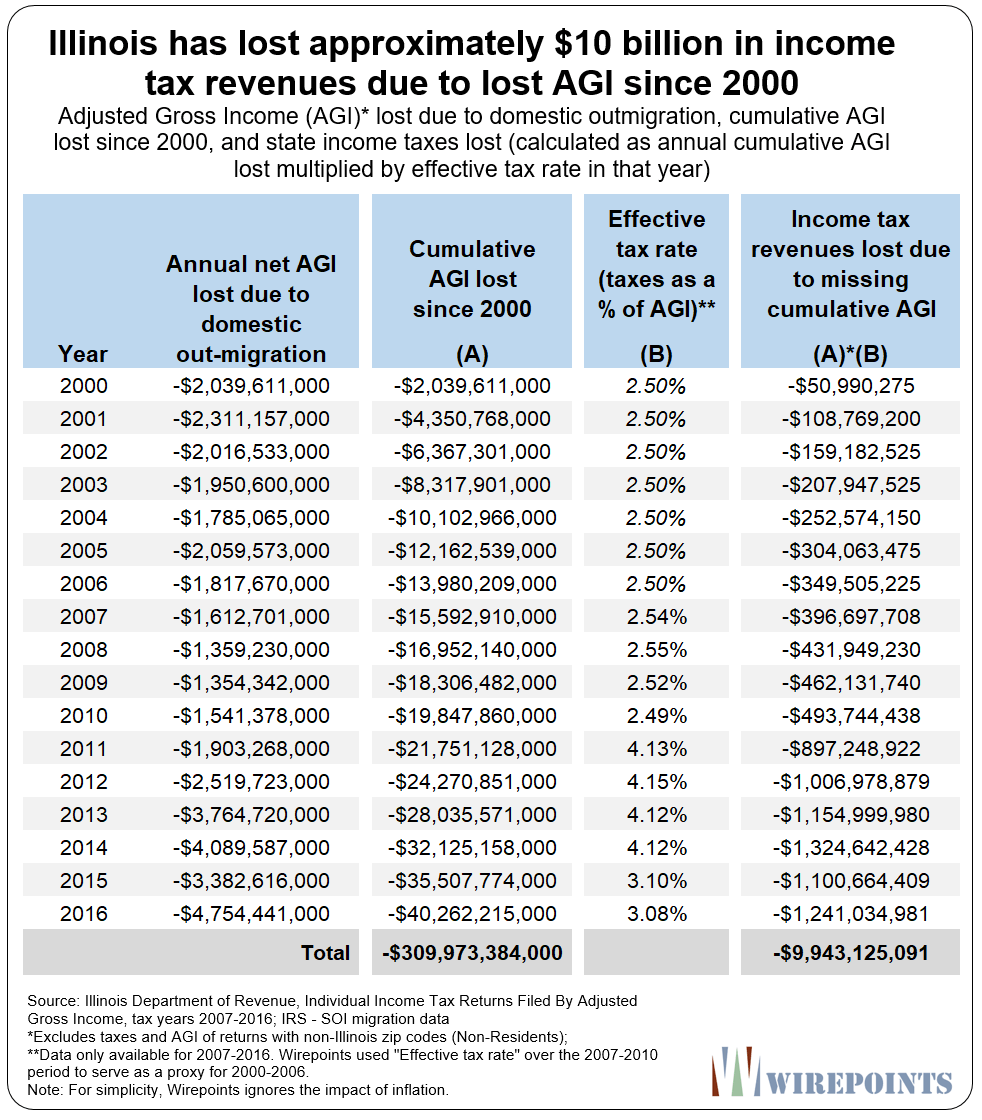 Some may question the impact retirees might have on the $10 billion calculation considering Illinois does not tax retirement income. But as noted above, IDOR’s AGI includes retiree income, meaning its impact is captured in the effective tax rates we used.

The only solution to this problem is a U Haul.
The greedy cops, teachers and firemen have destroyed the quality of living for everyone else.
Most rich pension money ends up in Florida.

I left Illinois two weeks ago and took four taxpayers with me. I’ll never return and I’ll try my best to show everyone the best escape route. You pay so much and get so little in Illinois. I couldn’t believe how clean so many other states were too. So glad we’re gone!

The only thing (other than deep roots) that keeps me in the state is that my business tends to do well when times are bad. And bad times are a comin’ to this state, and I should be able to take that to the bank for a while before I retire. Things are already pretty bad here in ways they are not bad elsewhere. Which is good for me, bad for the state; and then I’ll likely retire in a red state.

Sounds like a good plan assuming your business does indeed do well. My only suggestion would be to not own real estate, business or personal. Anyway, from all your comments I can tell you will be fine because you have paid attention to the facts. I’m overseas temporarily, researching where I want to live next in the USA. Unknowledgeable Illinois residents would scream if they saw how reasonable taxes are elsewhere. Probably many of them assume Illinois taxes are normal.

“Probably many of them assume Illinois taxes are normal.” Actually, most IL residents realize they are being taxed out of their minds. They just choose to pay it because packing up and moving, for most people, is the nuclear option. Leaving family, friends, a job, roots, schools and often a professional license (think of all the licenses IL requires from realtor to broker to hairdresser), it’s tough to just pack up and leave it all. That’s why IL has the slow drain. Kids go away to college, don’t come back. Parents retire elsewhere. Breadwinner takes a job transfer. Job opportunity… Read more »

When you move to a red state plz don’t turn it purple by voting for leftists and liberals.

I really like the second chart — clearly indicating the acceleration and worsening situation since 2011.

But I have a question: how much would inflation attribute to the apparent acceleration? I’m fairly confident the answer is ‘negligible’, but just thought I’d ask since some critics may try to use that as an excuse.

Nice analysis. Additionally if a govt pensioner leaves it is worse than if a regular retiree leaves. Neither one pays taxes. But for the govt pensioner Illinois has to do the embarassing task of mailing their pension check to Florida! A larger sum than a taxable AGI family. When a retiree leaves there is no taxable AGI loss, but there is a whole lot of consumption tax loss.

And the elsewhere they choose to live is often a low cost locale that provides them an upper middle class lifestyle. I’ve got a buddy whose father worked for a county gov as just a regular joe worker. They lived frugally for sure, but upon retirement at 52!, his father got a gold plated pension (the wife stayed home). They moved to a southern state, now have a house on a lake with a pontoon boat and basically drink and hang out all day. Sure, the house in the county appreciated – a lot – and probably a small inheritance… Read more »

I spent a few minutes to digest the charts in order to understand them. Unfortunately, 90% of Illinois residents could spend the same amount of time and fail to comprehend the information, and that goes to the root of the overall Illinois situation. Most Illinois residents lack the education to process data. For many residents being able to make change from a dollar is the limit of their math skills. These Wirepoint charts are like a foreign language. Next, consider the overall English skills of this same population. It’s also limiting in their ability to digest data. What would you… Read more »

Sad but true. And even those who know there’s a problem lack the comprehension of just how bad it is. One of my coworkers actually believed that the marijuana legalization would bring in enough tax revenue to set things right. Incidentally, she also supported Bernie and legit believes that Missouri is trying to ban all forms of birth control.

Just like a Driver’s License, people should be required to pass a test in order to vote.