That’s now five years in a row Illinois has shrunk, joining only West Virginia and Connecticut in losing population for five years or more.

Blame whatever you want: pensions, corruption, property taxes or perpetual budget crises, but there’s no denying Illinoisans are fleeing the state.

Here are the six key facts you need to know: 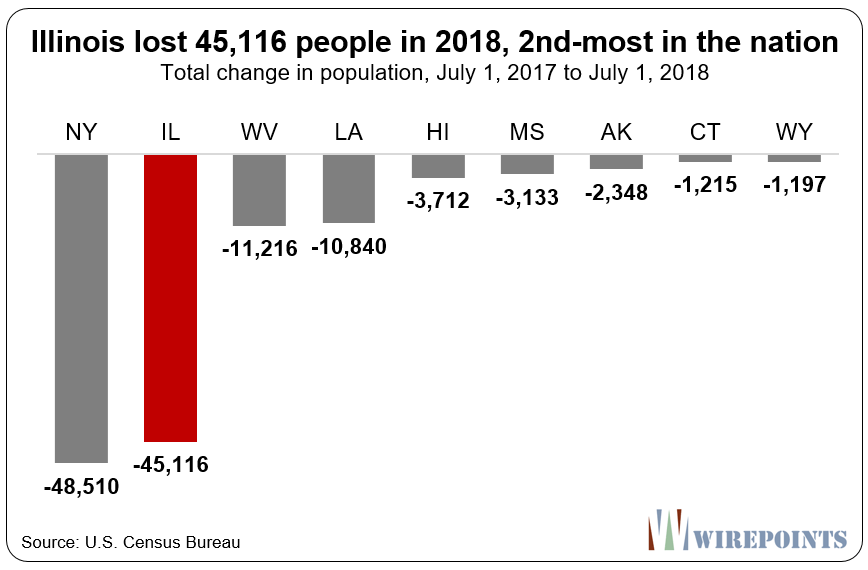 2. Illinois has lost population five years in a row, totaling a loss of more than 157,000 people. That’s the equivalent of losing the entire city of Rockford. 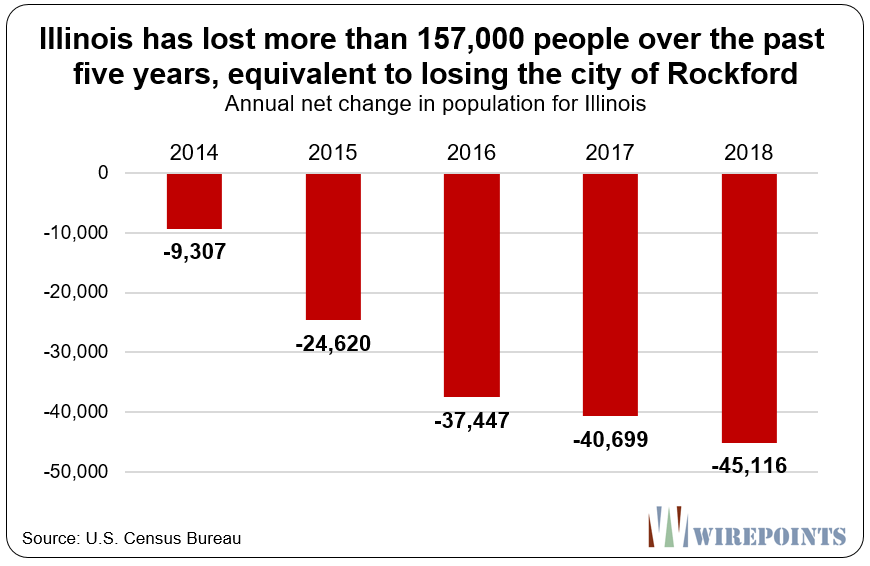 3. A key reason for Illinois’ loss in population is its continuous stream of residents leaving the state. Over 114,000 net residents left the state in 2018, a near record. Since 2000, that’s a net loss of nearly 1.5 million people. 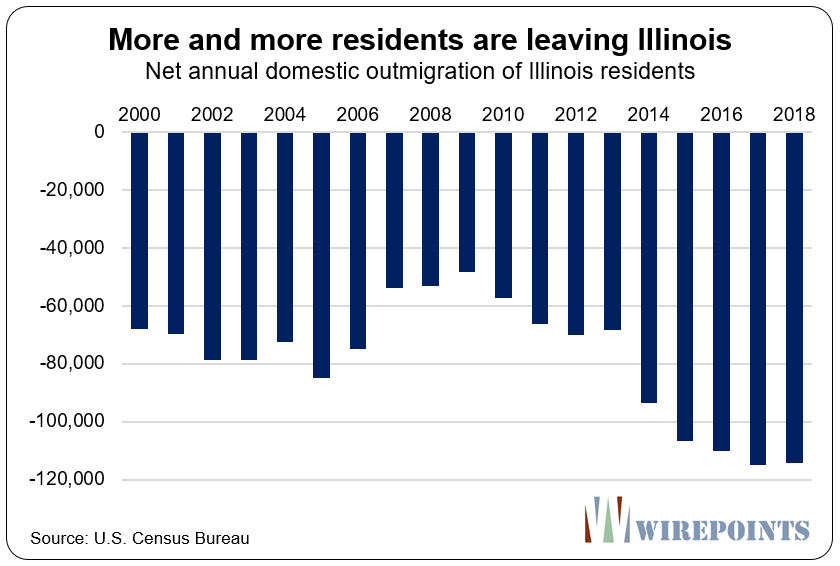 4. The outmigration losses are some of the nation’s worst. When measured per 1,000 people, Illinois lost nearly 9 people to net outmigration, the 3rd-highest in the nation. And as the list below shows, none of Illinois’ neighbors make the top 20 list of biggest losers per 1,000. Iowa, Missouri and Wisconsin each lost less than 1 person per 1,000 of population, ranking 25th, 26th and 27th, respectively. In contrast, Indiana and Kentucky actually had net migration increases. 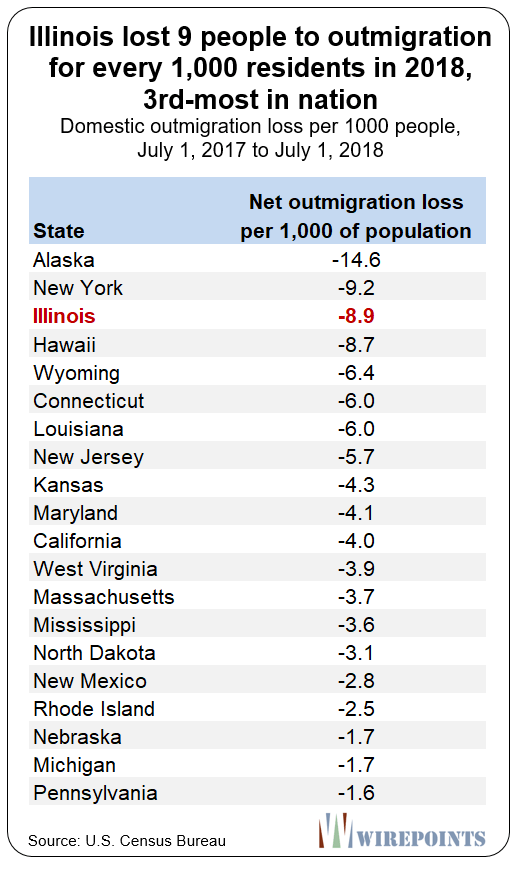 5. Bad weather – the favorite excuse of those who deny Illinois’ outmigration problems – isn’t to blame for the state’s ills. All of Illinois’ neighboring states gained in population. In fact, Indiana gained nearly 32,000 last year and nearby Minnesota added nearly as many people as Illinois lost. 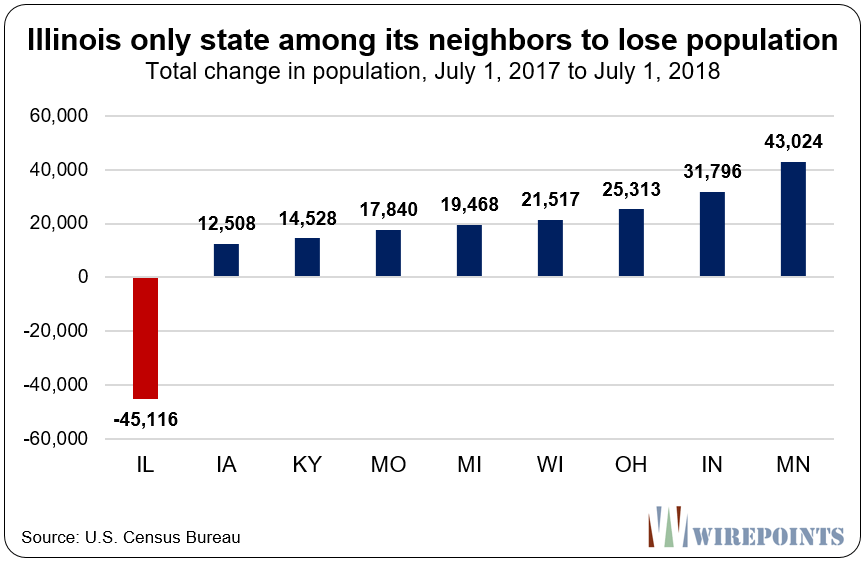 6. Some pundits will call Illinois’ 0.8 percent population loss since 2010 a rounding error. But while Illinois has shrunk, its neighbors have grown. Indiana has gained the equivalent of the City of Rockford and Iowa has gained the City of Elgin since the start of the decade. 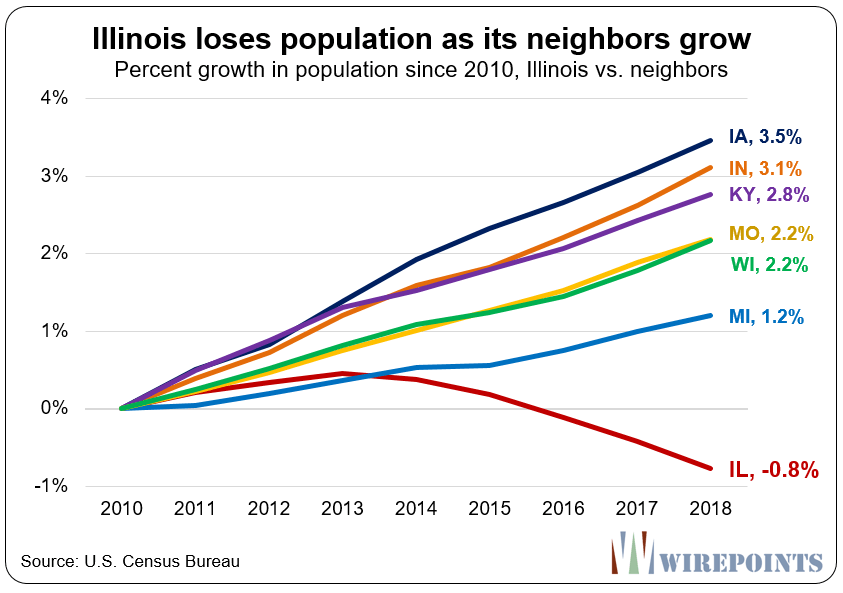 Illinois politicians can continue to ignore the massive mess they’ve created – from the nation’s worst pension crisis to the highest property taxes to the nation’s lowest credit rating.

But as long as they continue to fail, residents will continue to leave. And with them goes the tax base.

You don’t have to wonder what the wake up call is going to be. If it’s not the exodus of Illinoisans, it’s going to be insolvency. Illinois’ tax base simply won’t support all the debt that’s been built up.

Want to know why everybody’s leaving Illinois? Read the below:

Illinois is a sanctuary state…it is NOT losing population. The illegal immigrants have far surpassed the Whites AND Blacks leaving. Don’t believe me? Just drive around the Chicago area, even the suburbs are becoming third world especially in Cook County.

Bottom line cause This is just a forced Redistribution of Wealth. Hard earned money taken from the many and given to the few. Dyslexic Robin Hood mentality!

This is only going to continue to spiral. Illinois won’t even identify the problem, let alone attempt to solve it. The fact that Pritz is now saying that it “is not possible to amend the constitution for pensions” is an alarm bell for anyone with a brain that they are not going to fix this, and they will simply just let it implode. That nastiness with the next national recession will kill any wealth you have remaining in this state. The voters here keep voting for what they deserve, and the rest of us are packing our bags. Eventually those… Read more »

… and in 2019, Illinois should expect another 50,000 to no longer be part of it’s tax base. I wonder if the 2019 Illinois budget took that into consideration.

It will be probably be around 75k.