“If you have any questions about Illinois’ budget and pension crisis, buzz off and talk to the union guy.”

That might as well have been a sign worn by three Illinois lawmakers at what they called a “town hall” on the budget and pensions on Tuesday.

Not one of them said a word on the topic and each refused to answer any questions on it. Instead, they had their audience listen to a presentation from the guest speaker for over an hour and refused all questions, directing those to the guest. He was Ralph Martire of the CTBA, the Center for Tax and Budget Accountability, an organization heavily supported by Illinois public unions. His presentation focused on his usual core remedies for our crisis, well known to readers here: More borrowing, more spending and more taxes.

Many in the audience were not happy, to say the least. 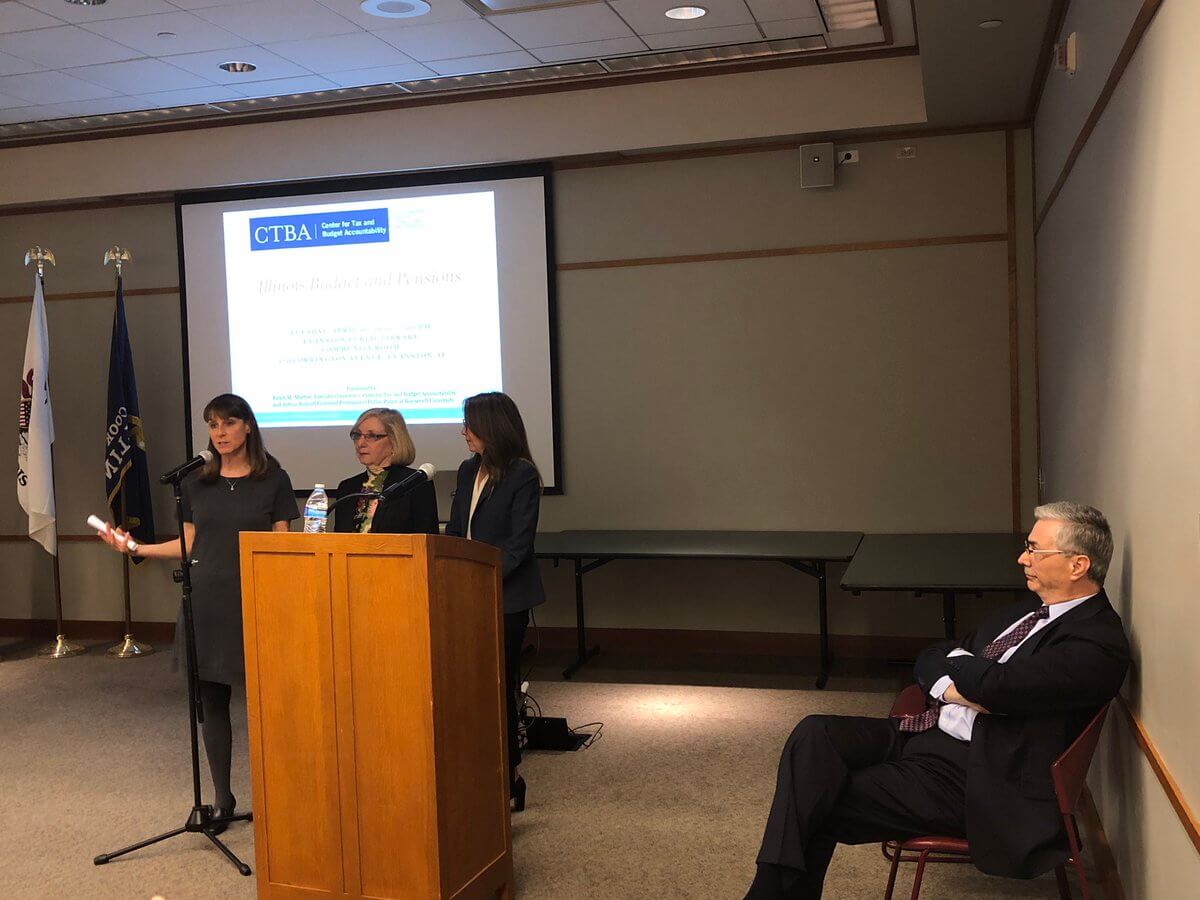 Afterward, Fine tweeted the picture on the right saying, “Thank you for everyone who came to our detailed discussion on IL budget & pensions w/ Ralph Martire.” In fact, the three had no role at all. The picture is from the introductions.

When constituents are invited to a “town hall” they should expect to hear their representatives’ viewpoints and ask them questions. They should expect at least to know if the representatives agree with the guest speaker. Not in Illinois. Just take what the union rep says. It was wonderfully emblematic of how Springfield is run in our one-party system dominated by public unions.

Martire’s presentation was a long form of his standard snow job, well known to regular readers here. His pension plan includes kicking the can by using pension obligation bonds to borrow to cover near term contributions and cutting the long term funding target to 70%.

Unfortunately for Martire, the audience included a very accomplished pension actuary, Mitch Serota, who ripped into Matire during the Q&A. Serota subsequently sent me a written critique of Martire’s presentation, which is linked here. Please read the whole thing because Martire is a major voice in Illinois’ pension crisis and served as an advisor to Governor JB Pritzker prior to the inauguration. Serota’s critique is important.

Personally, I thought Martire’s biggest falsehood was his claim that there’s zero chance a constitutional amendment of our pension protection clause would survive a court challenge. That’s the assumption he wants everybody to work off because no pension reform would then be attempted. But Martire is dead wrong, and it’s not just this rusty lawyer saying so. The issue would be litigated, but the probability would be in favor of reform. Arizona just did it an nobody even challenged it.

I asked how a graduated income tax proposal, that Martire supports which would raise just $3.4 billion, would make much difference when our fiscal hole is several multiples of that. I specifically asked for that to be answered by the lawmakers and not Martire. At that point, Gabel jumped up, cut off the person who was selecting the questions, and redirected to a different audience member. “What, I get no answer from any of you?” I asked that several times. Nothing. They just turned away. Nor did Martire answer it.

That was typical Illinois once again. Challenge a politician on their supposed solutions and you’re told to jump in Lake Michigan. They don’t need voters like us who asked questions.

Martire’s left-leaning message seemed mostly well-received by the rest of the audience, as you’d expect in far left Evanston where the event was held, but the reaction from a very large minority ranged from skepticism to outright hostility.

That dissension, too, seemed emblematic of what’s going on statewide. One questioner wouldn’t stop talking about Martire’s union backing. Quite a few others, who clearly had some financial background, focused on the folly of pension obligation bonds and Martire’s assumptions. Sensing the crowed was turning against him, Martire resorted to filibustering with long, tedious answers so that no further questions could be asked.

It was no surprise to me that Gabel and Fine wouldn’t talk. To put it nicely, they just don’t know enough to speak on the topics or answer any questions. Worse, they are dishonest and utterly irresponsible on fiscal matters. See my earlier articles explaining why linked here, here and here.

Gong-Gershowitz is new so I know little about her. I’m told she’s quite smart, however, which makes me wonder why she would share this event with the two others.

Maybe it all doesn’t matter because, in the end, all three will vote as House Speaker Michael Madigan and Senate President John Cullerton direct them. That, too, is just typical Springfield.

Would love to see how a graduated income tax that only negatively affects 3% of the population is going to raise 3.4 billion per year

Vote Up1Vote Down
Bob out of here

Those 3% are in the best position to leave. I know, my best friend from high school who lives downstate is closing on a house today in Tennessee. He and wife would be hit hard by the tax change, and instead of 2.5% property tax he’ll be paying $1470 on a house with an assessed value of $170K, and no state income tax.

Hey, if the Dems are fine paying the Illinois public retirees only 70% of their pensions, I can support that plan. Next, let’s agree to pay the bonds off at 70 cents (on the dollar).

Vote Up1Vote Down
Bob out of here

These town halls are typical dog and pony shows anyway. Most of the people who attend are acolytes of the politicians. I’ts not uncommon to see shop stewards from SEIU or AFSCME as well. The dissenters are usually recognized beforehand. Guessing there’s not many Serotas at this meetings. If there were, they wouldn’t have them.

February 19, 2020
If you’ve listened to Gov. J.B. Pritzker in the past few weeks, you’ve heard him play games with words. We called him out on it recently and now he’s doing it again. If the progressive tax fixes the budget deficit and delivers a tax cut, then there will be no money for property tax relief.
View Comments (13) | Add Comment