Most school district boards across Illinois want to raise property taxes to the fullest extent allowed each year. They argue they’ve got to grab the money while they can. That’s the attitude that’s contributed to Illinoisans paying the highest property taxes in the nation.

That same argument is now being played out in the Village of Wilmette. Tax hike proponents are once again demanding that Wilmette School District 39 raise taxes while arguing: “if we don’t raise our taxes, our property values will fall.”

To begin with, that argument is spurious. Whenever the cost of holding a property increases – i.e., when taxes go up – the property’s value decreases since the owner is required to pay more each year to own that property. That’s especially the case in Illinois, where new taxes mostly go to pay for old debts, administrative bloat and corrupt practices, instead of new services.

And the argument also ignores the facts on the ground.

According to the logic of tax hike proponents, the higher taxes Wilmette residents have been paying since the end of the Great Recession should have sent home prices shooting up.

But Wilmette’s property values have instead gone down, according to the district’s own finances.

The taxes paid by Wilmette residents and businesses to the school district grew by 37 percent between 2009 and 2016, to nearly $52 million.

In contrast, the value of taxable property accessible to the district, known as the Equalized Assessed Value, fell by 17 percent during that time. The EAV dropped to $1.8 billion in 2015 from $2.2 billion in 2009. 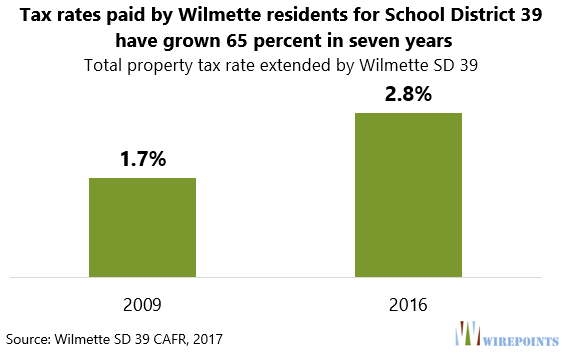 And that’s just the tax rate for the elementary school district alone. That rate doesn’t include the additional property taxes levied by the high school district, local police and fire pensions, the village of Wilmette, Cook County and many other local governments. 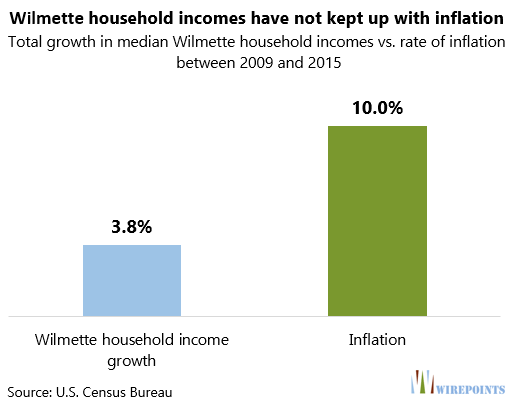 That means that Wilmette residents are having to pay higher taxes with less available income even as their property values drop.

Illinoisans as a whole pay the highest property taxes in the nation. 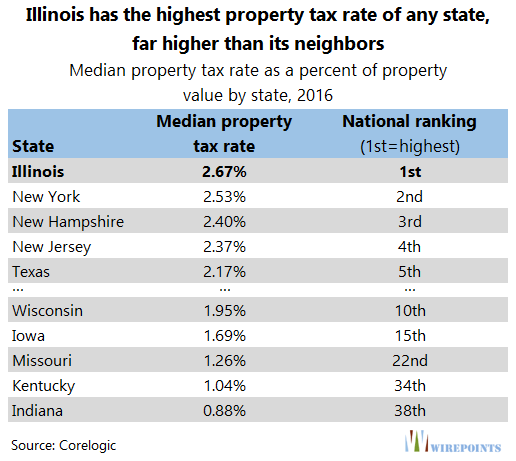 And Wilmette is smack dab in ground zero of those high taxes, the highest of which can be found in Cook and the collar counties. Lake County residents pay 9.4 percent of their incomes toward property taxes. In McHenry, it’s 7.8 percent. And in Cook and Dupage counties, it’s 7.5 percent.

Those high property taxes have contributed to the growing outflow of residents from Illinois. In 2016 alone, Illinois lost a net of 114,000 residents to other states. Losing that number of people is the equivalent of wiping the populations of Wilmette, Kenilworth, Winnetka, Glencoe, Highland Park, Lake Forest and Lake Bluff off the map.

In fact, so many Illinoisans have left to find better opportunities in other states that Illinois has actually lost population in each of the past three years.

As Illinois loses more people, hikes taxes and goes deeper into debt, it will become harder and harder for communities to attract new residents.

Even some of Illinois’ more affluent communities, such as Lake Forest, are already having trouble selling some of their more expensive homes. In response, the city has created a $100,000 marketing campaign that highlights Lake Forest’s relatively low property taxes as an advantage to potential homebuyers.

Wilmette officials must understand there are negative consequences to pushing up property taxes ever higher. The higher the burden, the more likely that residents may seek out opportunities in other states.

Wilmette and other communities should be focusing on reforms, not higher taxes, to free up money for education. In part 2, we’ll look at how Illinois’ bloated education administrations, executive-level compensation and pension benefits have siphoned off funds from our classrooms.

It sunsets in 5 years, not 3. Unless renewed. $75 Million per year available or $375M over the 5 years. Not a lot of money but maybe enough to invoke some change…

Yes the income tax credit for contributing to a Scholarship Granting Organization (SGO) for the purpose of education scholarships for children attending non public schools program, which is named the Invest in Kids Act, sunsets in 5 years not 3 years. It is part of Senate Bill 1947 (SB 1947) which was signed into law as Public Act 100-0465 (PA 100-0465) by Governor Bruce Rauner on August 31, 2017. The Illinois Department of Revenue has information on the program. http://www.revenue.state.il.us/InvestInKids/QandA.htm http://www.revenue.state.il.us/Publications/Bulletins/2018/FY-2018-07.pdf http://tax.illinois.gov/Publications/Bulletins/2018/FY-2018-12.pdf https://www2.illinois.gov/IISNews/15033-IDOR_Invest_in_Kids_Act_Release.pdf The Illinois State Board of Education has the following two paragraphs posted under “Other” at the below… Read more »

The best reform to an overpriced government monopoly is competition. The new Illinois education funding model that became law this year provides a sort of limited competition, allowing certain students to attend a private school using additional taxpayer money obtained from tax credits, and that program expires in 3 years unless renewed. That law provides additional state funding for public education, so the monopoly feels limited financial pain. An oft cited thought is that an eventual financial crisis will force change. One aspect of such a crisis, is how high will taxpayer revenue to government be hiked, how much will… Read more »

Hey Mike, so do you think this new education bill is good?

In a financial nutshell, the education funding bill calls for money the state does not have. The state cannot truly balance its budget, issued $6B of bonds (that goes not include the interest that taxpayers are responsible for) in October 2017 to reduce the approximately $16B (at that time) in state past due bills, has massive debt (bonds, pensions, retiree healthcare, etc.) when compared by any measure to other states, has high state worker costs (with the AFSCME union pushing for further hikes on an expired collective bargaining agreement), is 49 of 50 states with an F rating by the… Read more »

I’m waiting to see if the new tax bill goes through and if you are no longer able to deduct your property taxes, then you may see some change.