Just six years after its most recent referendum to hike taxes, Wilmette School District 39 officials are hinting at cuts to programs if they don’t get their way over the next property tax levy. Rather than pass reforms, officials want to raise property taxes to the maximum extent possible.

Like other districts across the state, Wilmette is distracting residents from one the major problems with education in Illinois: administrative bloat. Too many administrations, executive-level salaries and the multi-million dollar pensions that come with them are crowding out funding for students and classrooms. And that has districts across the state looking to fill their budgets with even bigger tax levies.

District bloat is one of Illinois’ most pressing education problems. Between 1992 and 2009, the number of district administrators in Illinois grew by 36 percent, 2.5 times faster than student growth.

Wilmette’s own bloat is clearly visible when looking at a list of the district’s top pensioners. Not only are the retirement benefits rich – lifetime pension benefits run from $3 million to $6 million – but in most cases retirees began collecting full benefits while still in their 50’s. And pensioners quickly recoup the small amount they contribute to their pensions. Career pensioners typically make back what they contributed two to four years into retirement. 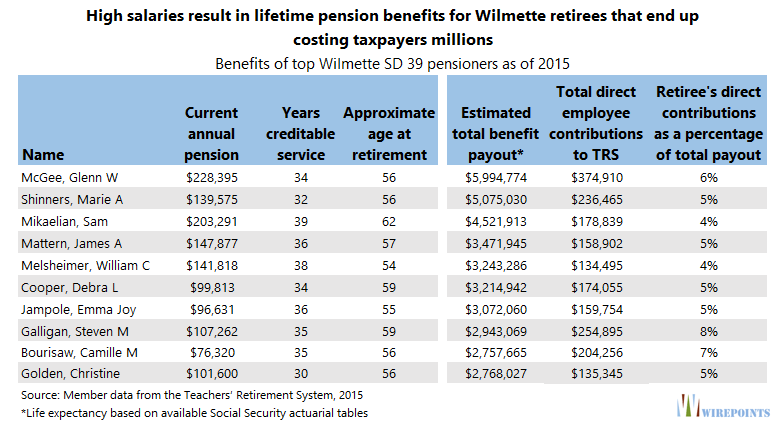 Often, retired administrators go on to new jobs even as they continue to receive pension benefits from the state. Glenn “Max” McGee is the posterchild for how the system works.

Not only did McGee retire from his New Trier job in Illinois at the age of 56 with a starting annual pension of $184,000, but he’s continued to work in other highly-compensated executive positions since then. All the while, he’s continued to draw on his Illinois pension. Today, that pension has grown to nearly $242,000 as the result of annual, 3-percent compounded cost-of-living adjustments.

Pension benefits in Illinois have only gotten bigger as salaries have grown.

Today, there are 9,000 school administrators in Illinois – from principals to technology directors – who receive six-figure compensation packages and who will each receive $3 million or more in pension benefits over the course of their retirements.

In Wilmette, according to the Illinois State Board of Education’s EIS database, every one of the district’s current 12 full-time administrators receives a total annual compensation package worth $160,000 or more. 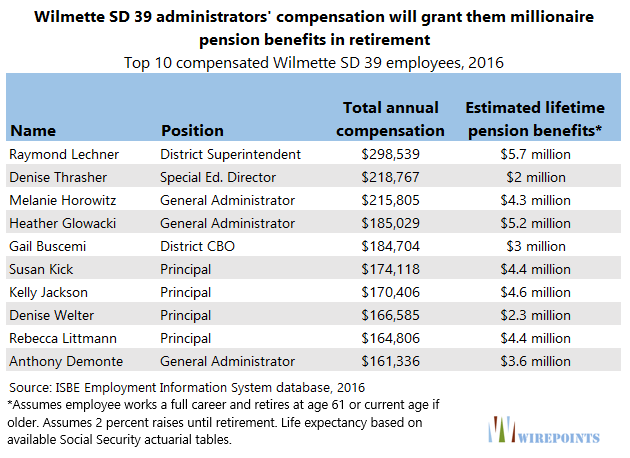 The cost of these administrator pensions has implications beyond just Wilmette.

Uncontrolled pension costs and politicians’ mismanagement at all levels of government have created a $250 billion state pension debt bubble. It threatens to collapse the state’s credit into a junk rating. And it’s stealing vital state aid from school districts.

In 2015, nearly half of every dollar appropriated by the state to education went to pay for pension costs instead of making it to classrooms.

Too many school districts, too many administrators

The Wilmette School District is part of such duplication. It is one of six feeder districts that sends students to an overarching high school district, New Trier Township HSD 203. They are all within the same high school boundary and could easily be consolidated under one administrative district, rather than seven. 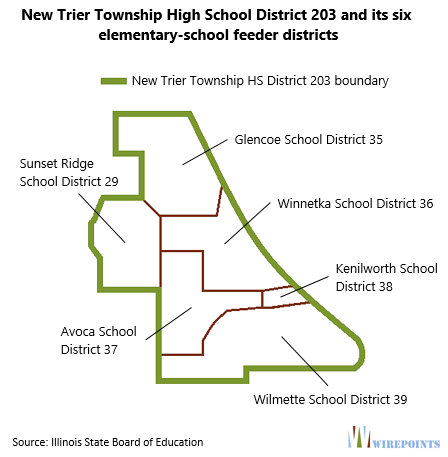 That would save local taxpayers millions of dollars in compensation costs annually and hundreds of millions more in future pension costs.

The superintendents in these districts each receive compensation packages ranging from $190,000 to $370,000 annually. That means on average they’ll receive lifetime pension benefits of about $6 million, depending on their years of service.

In total, 136 district office administrators work in the seven district offices. Most of those positions – from bookkeeping to technology to HR – are duplicative across districts. 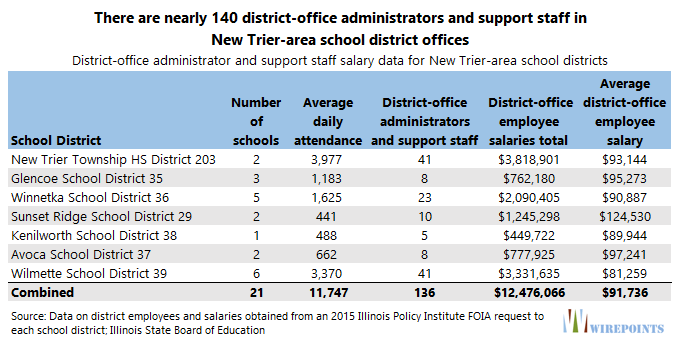 Rather than continue to pay for all that administration, Wilmette could hire more teachers and paraprofessionals or add programs if it simply merged its district management with its sister districts.

Wilmette School District 39 officials want to increase the district’s property tax levy to its maximum extent, rather than keep the levy flat or even reduce it.

To drive the point home at a school board meeting on November 13th, officials showed what was on the chopping block – music, art and foreign language classes, among many other programs – the last time the district passed a tax referendum back in 2011. It served as a “gentle” reminder to Wilmette residents that officials are offering them a false choice: pay up or lose valued services.

Wilmette residents should reject the demands for higher taxes. Instead, they should demand the school board commit to fighting for fewer administrators, school district consolidations and a dramatic change to pension benefits and perks. That’s the only sustainable way to get more money into classrooms.

Read part 1 of our examination of Wilmette property taxes here.

“The problem with Socialism is that you will eventually run out of other peoples’ money.”

Thanks Mike for info. I’ll be there. I knew Cook County was corrupt, but didn’t realize the extent on North Shore.

Arrive early to get a seat. Following is the link to the Wilmette Elementary D39 Board Meeting Information website containing meeting agendas and the documents discussed at the meetings. wilmette39.org/board_of_ed/meeting_information Here is the link to the district’s YouTube channel containing videotapes of past board meetings: http://www.youtube.com/channel/UCQw4Gj4OqBbhuU8uPg8_GQQ Reviewing the agenda, documents, and video from the November 13, 2017 board meeting, plus Parts 1 & 2 of the Wirepoints series, provides context for the upcoming December 18th board meeting. Some administrators, business officials, and board members from the district will likely be attending the 2017 Joint Annual Conference of the Illinois Association… Read more »