One can imagine Illinois Comptroller Susana Mendoza didn’t really want to garnish the city of Harvey’s revenues. It certainly doesn’t fit into the plans of the state political machine. The garnishment only exposed just how pervasive the local pension crisis is by pushing Harvey into defacto bankruptcy – even if only temporarily.

As a consequence of the interception, Harvey fired 40 of its public safety workers to avoid insolvency. The law has rendered the city what most of us would call bankrupt.

The problem this creates extends far beyond Harvey. The garnishment clause may wreak havoc on hundreds of Illinois communities, bringing their long-running financial crises to a head. A Wirepoints report revealed that 368 of Illinois’ 651 public safety pension funds were shorted their full payments in 2016. In all, that means about 200 municipalities – and not just Harvey – could have their tax revenues garnished.

The law could trigger a wave of de facto bankruptcies in those cities that can’t afford to pay for both their pensions and their daily operations. East St. Louis, Kankakee, North Chicago and many others will fall deeper into the abyss if they are forced to pay their full bills. And bigger cities like Springfield and Rockford have already warned of the possibility of firing public safety workers because of higher pension costs.

That’s an enormous problem for the state political machine. The more cities that fall into a mess, the more it condemns their failed policies and lack of action.

Perhaps that explains why the courts have already stepped in to temporarily halt the comptroller’s garnishment of Harvey’s revenues at the behest of the city. And why Rep. Napoleon Harris, who represents the district that includes Harvey, is already considering a bill to repeal the garnishment clause.

It’s surprising that Harvey is the only city to have faced garnishment.

Why aren’t the other pension funds that have been shorted demanding the comptroller step in? Why aren’t public safety union officials demanding full pension payments in every city?

Because garnishments would ruin the status quo. If city funds are garnished, layoffs and pay cuts like those in Harvey would occur across the state.

Union officials want to avoid that. Their power comes from a growing workforce and rising payrolls. So they’ve always been willing to forego pension funding if it means more money today for active workers.

The unions are gambling their members’ retirement security on a bet that taxpayers will eventually be forced to fund those retirements, thanks to Illinois’ constitutional protections. They’re gambling the money will have to come from somewhere.

City officials have also made a choice. They know compensation cuts to workers are political suicide. And Illinoisans already pay the highest property taxes in the nation, so massive tax hikes are difficult too. Other reforms, from pension benefit changes to collective bargaining reforms, are controlled by state politicians. So local officials choose to do nothing but muddle along as city finances and vital services deteriorate.

It’s no wonder why many cities can’t fund both their operations and pensions. The pension benefits owed to workers and retirees have grown at a pace that’s dwarfed Illinoisans incomes. That’s true in Harvey and everywhere else across the state.

In 1987, municipalities owed a total of $2.6 billion in benefits to public safety workers and retirees across the state. Today, that number has jumped to $23.4 billion. That’s nearly an 800 percent increase. 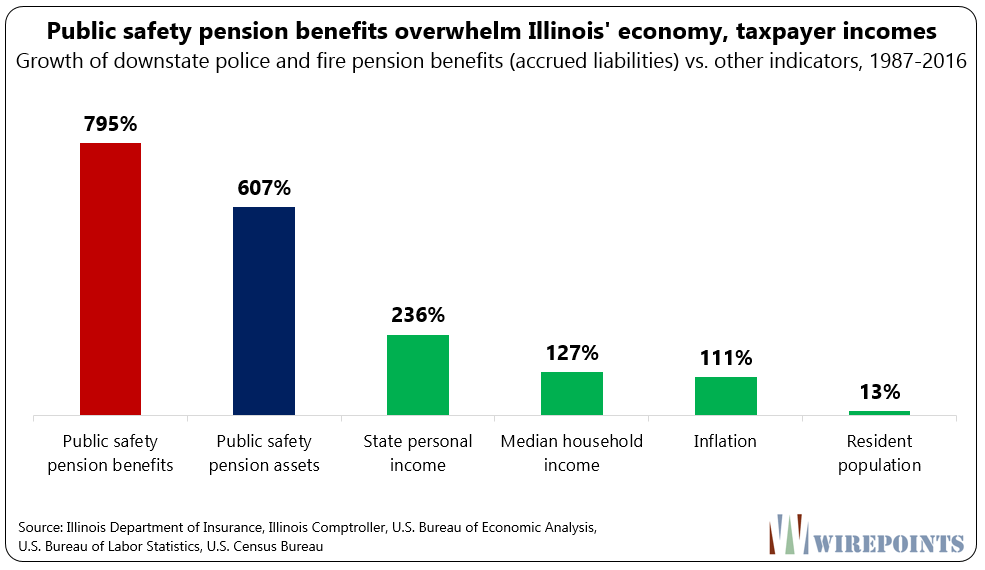 In Harvey, benefit growth has completely overwhelmed struggling residents’ ability to pay for them. Since the turn of the century, Harvey public safety pension benefits owed to active workers and retirees have grown an average of 4.6 percent a year. That’s more than double the annual growth in inflation. Meanwhile, household incomes have collapsed. They’ve fallen 2.3 percent a year over the past decade and a half. Poverty has grown to nearly 40 percent and the city has lost 10 percent of its population. 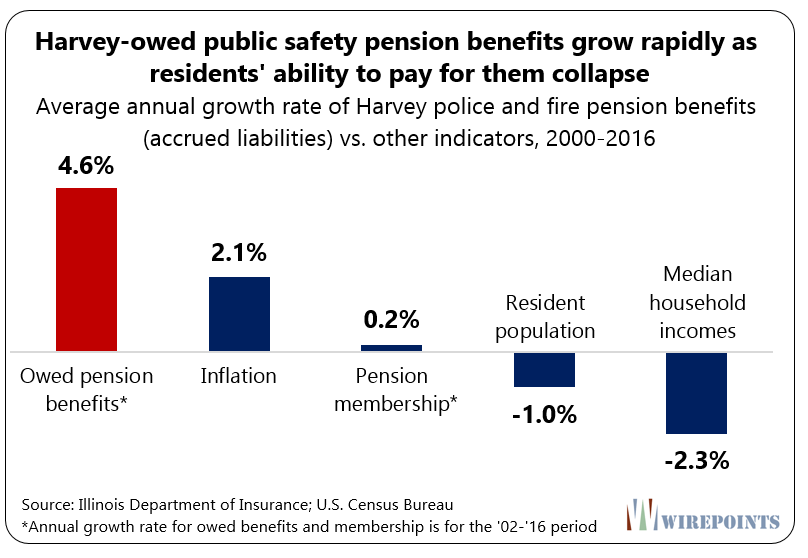 Harvey has put the state political machine in a bind. If lawmakers allow garnishments to continue, a wave of pension funds could demand that the state intercept their city’s revenues. That could lead to cash crunches in struggling municipalities and result in pay cuts and layoffs for public sector union workers across the state.

And the comptroller’s interceptions will make lawmakers look bad. By garnishing city revenues, Illinois politicians will overtly protect and prioritize public pensions over social services and health care in the state’s worst-off communities.

On the other hand, if lawmakers reverse the garnishment law via legislation, they’ll reveal their unwillingness to defend public sector pensions.

Politicians can try to rewind the Harvey situation if they want, but it’s too late. The true size of Illinois municipalities’ mess has been revealed.

The only way out is structural pension and labor reforms. 401(k)s for new workers. A constitutional amendment to alter pension benefits. Authority for localities to determine their own collective bargaining rules. All are a must for cities to begin fixing themselves.

And for some municipalities whose finances are beyond repair, bankruptcy might be the only alternative that can both protect retirees and allow cities to reorganize their debts.

Harvey has given Illinoisans a glimpse of what happens when the status quo that the political class is so desperate to preserve stops working. And it isn’t pretty.

We’re entering some pretty uncomfortable racial territory for the Democrats as the first two villages to fall are heavily populated by minorities:

Another thing they both have in common, and what probably will continue to be a common thread for all these failing municipal pensions, is declining population:

You can’t lose 30-40% of your population and expect to keep up with legacy pension costs. I would like to know how headcount has evolved over the years.

Heck, all of south Cook County is a disaster because of them yet nobody cares, especially them. It’s disgraceful. The story we did a couple years ago on the humanitarian cost, especially to blacks, of high property taxes there should have been a national story, but got entirely ignored, except by Dennis Rodman at Crain’s.

The WSJ had an amazing article a while back that perfectly illustrates why pensions are in trouble. Read about a nun in Germany who had to learn how to trade stocks like Bayer and Volkswagen. The convent was getting zero interest on its cash in the bank so one of the nuns had to start trading stocks to get some investment income.

this is the kabuki theater of Illinois (and national) politics. First the politicians pass a law to solve a problem politicians created. Then when they have to be responsible for the adverse consequences(Obama Care?) either the executive branch chooses to ignore the unpleasant parts or they get relief from the their politically aligned brothers in the courts. Clear intent and language aside these bozos can re-interpret the law and cause chaos as the endless court battle never resolves issue. In the end no one is accountable . We should all thank the Illinois Democratic machine for this gift focusing attention… Read more »

Well at least Harvey will be able to rehire all those folks now that the reason they fired them is alleviated. (Sarcasm). Get out the popcorn and watch all these comrades of the same cloth cannibalize each other.

I have a question Mark. Why are the courts allowed to rule that Harvey can now get the state funds? Isn’t that clearly against state law about withholding the funds due to not making the bloated pension payments? The stay the court granted for Rauner’s last best final offer also seems to be allowed to just take forever, and why was that legal to be allowed in the first place? Both this ruling and the stay were simply allowed to protect the union slobs for a bit longer, but their time is running out. Is there any oversight to Illinois’… Read more »

A question for Ted or John, not Mark.

Hmmm, I did not post the above, and my previous comment on Harvey was deleted. This is a question for the moderator. Who posted this in my name about Judges, or am I somehow reading this wrong?

Jake, I don’t know. We didn’t delete any comments and I see nothing on your name in the spam filter. I will delete that comment you say wasn’t yours.

I believe Mark Glennon did respond to this type of question in a comment to another recent column. The TRO issued by the judge enjoining the garnishment was not accompanied by a decision or any explanation behind the ruling. One could guess that the decision was an entirely political one, permitting Harvey a few more breaths of air before it collapses. There are some strange facts here in that a number of factions within the Machine are ready to devour each other. The Harvey pension fund certified to the Comptroller as to insuffiency because they know Harvey is a basket… Read more »

Right. See the Bond Buyer article I posted today that discusses some of what was apparently argued. Some of that looks like it might support a temporary order, but other things not so. In any event, I think we should know more when they go for the hearing for a temporary injunction, which will be very soon, and has a different standard.