Many of Chicagoland’s elite know exactly how to pass the property-tax buck onto other residents. For decades they’ve used their powerful connections to cut their own property tax bills and push the costs onto other unsuspecting residents. And that’s left many lower-income homeowners footing ever-larger tax bills.

The latest, most blatant example is Gov. J.B. Pritzker’s removal of toilets from one of his two Chicago mansions. Pritzker ripped out the toilets and convinced then-Cook County Assessor Joseph Berrios the home was “uninhabitable.” That move tanked the assessed value of the home and reduced Pritzker’s property tax bill by nearly $100,000. His tax savings became tax hikes for other homeowners.

While Pritzker’s actions are scandalous, they are nothing new in Illinois. House Speaker Mike Madigan and Chicago Alderman Ed Burke’s law firms have been helping commercial property owners in Chicago lower the assessed values of their buildings for decades, to values far lower than the buildings are worth. That’s where the big dollars are, as we highlight later in this piece.

But Pritzker’s actions exemplify exactly how the system works. Learn the tricks, “torture the data,” hire a well-connected lawyer and get the assessor’s buy-in. And just like that, a tax bill is cut.

Smaller tax bills for some doesn’t mean a local government takes in less in taxes. Instead, the city and county’s remaining residents are required to make up the difference.

That problem – how lower-income homeowners have been hurt by tax shifting – was well documented by the Tribune in 2017 in a four-part series covering the full extent of the assessment process and its corruption.

The struggling residents in Chicago’s south suburbs have suffered the most from the unfair assessment process. Wirepoints recently highlighted how residents in that area are now living with collapsed home prices and sky-high effective property tax rates that sometimes reach double digits.

Pritzker used the corrupt system run by Berrios to successfully lower the assessment on his Chicago mansion back in 2015. The mansion was originally valued by the assessor at over $6 million. That was until Pritzker had the toilets removed.

Under a murky rule that allows properties to be deemed “uninhabitable,” Berrios lowered the assessed value of the property to just under $1.1 million. That dropped Pritzker’s total tax bills over several years by a total of more than $330,000 – much of which was passed on to other residents within the same tax jurisdictions in the form of higher tax bills.

Pritzker eventually paid the money back, and the scandal didn’t stop him from getting elected governor. But it could add Pritzker to the growing list of indicted Illinois governors. As it turns out, the feds have been investigating the whole toilet scheme since October of last year.

Regardless of how that plays out, Pritzker’s actions provide the perfect example of how property scams and deals impact other people’s properties, their taxes and their lives.

That same tax shift happens when lawmakers like Madigan and Burke engage in the appeal process through their high-powered law firms. They use their influence and relationships with politicians like Berrios – the assessor was also simultaneously the Cook County Democratic Party Chairman for many years – to bring down the property values of major Chicago properties.

Crain’s recently looked at how top commercial properties in Chicago are assessed and compared them to the recent sales prices of those same buildings. The flaws in the process – and the impact they have on Chicagoland residents – becomes evident quickly. 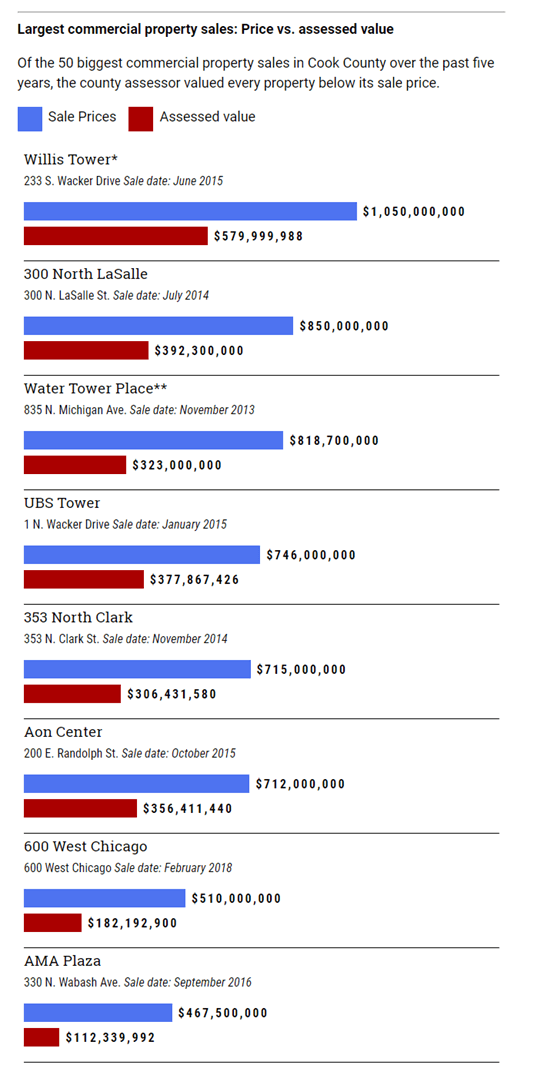 Crain’s analysis looked at: “the 50 biggest property sales in the county over the past five years and compares the sales prices with the values of the same properties as estimated by the assessor’s office. The gap is stark: The prices of all 50 properties add up to $17.1 billion, while the assessor values them at only $7.8 billion.

The difference between sale prices and assessments, according to Crain’s, was $9.2 billion. That’s equivalent to the cost of more than 40,000 median-priced Chicago-area homes.

Those billions in lower values resulted in higher tax bills for residents across Cook County.

Low skyscraper assessments in Chicago also have an impact beyond Cook County. The more poor Chicago can make itself look, the more it gets in state education subsidies. And that means there’s less funding to go around for other more needy districts around the state.

On the flip side, communities in South Cook are disproportionately harmed. Their proportionally higher assessments mean that school districts in those communities get less state money than they otherwise would.

At the very least it’s going to be a messy few years as the relative value of assessments shift from South Cook to wealthier suburbs and from residential to commercial properties.

Whatever his methods, Kaegi’s end result has to be an assessment process and a property tax system that is more simple and transparent.

If Kaegi and other officials can’t accomplish that, then those willing to cheat the system will continue to find ways to push the nation’s highest property taxes onto ordinary Illinoisans.

And that will continue the flight of Chicagoans out of the city.

Read more about Illinois’ property taxes and the crisis in South Cook and beyond:

This business model was exposed in 2012 by LA County Assessor aka John Noguez.Noguez funneled millions of dollars in campaign donation-bribes to dozens of campaigns over a decade in exchange for adjusted property valuations. Noguez was bailed in 2012 on a slam dunk case, hes still out in bail awaiting trial (2019).

Noguez is a screaming siren for USDOJ corruption in ignoring Democrat crime on a massive scale.
https://www.latimes.com/local/lanow/la-me-ln-john-noguez-20160721-snap-story.html

A Noguez prosecution would likely take a large portion of CA government with him, including Kamala Harris, forner CA AG.

My money is that Mike Madigan or his law firm has been ‘intimately’ benefiting from theses ‘adjustments’. I pray that the federal investigation includes ‘following the money’ for whose represented who in this scam.

Hey! Exactly right, that the assessed value of the home and reduced Pritzker’s property tax bill by nearly $100,000. His tax savings became tax hikes for other homeowners.

There is an unintended consequence here, though. I noticed a Crain’s editorial pointing out how happy they were that commercial property owners would now be paying their “fair share.” Justice is done. In theory I agree, but the problem is that the vast majority of commercial leases in our area are triple net. ALL costs are passed on, regardless of what they are, and including property taxes. Commercial property owners are smart not to take on that risk, and they’ve passed on all of it to business tenants, including building maintenance costs. They pay for nothing. So you will have… Read more »

It is going to get ugly. I work in the investment real estate industry (net lease retail). Fortunately we own nothing in Illinois and after our last offer we probably won’t make any more offers in Illinois. We offered on a property with a short term lease, leased by a Fortune 500 company. We offered them $250K to extend their lease. Their response “The Illinois minimum wage law will cost us $10M annually in Illinois, we need to keep our options open and therefore cannot do an early extension on any of our Illinois stores”. So what will they do… Read more »

Agreed. Splitting the property tax pie is a real distraction from the real problem – excessive and punitive property taxes. We can try to change how the property tax bill is split, but the real problem won’t be solved till we reform state spending. We need to slash state mandates including mandated pensions, overly restrictive collective bargaining laws and outrageous prevailing wages. That won’t happen under this administration and it won’t happen till the financial markets punish Illinois. Eventually, the math will prevail. Only then will reforms will have a chance.

Perhaps the city should eliminate tifs.

how about a system based on accuracy. The system has been designed to intentionally house errors. That people have to hire an attorney to get a bill that is closer to what could be more accurate is insane, but we understand why this industry and those township office exist. Donja’ just love you can appeal only 60 days per year to the helpers, aka pension placeholders, in the township offices but they are employed year round to stare into space 300 days per year.

3
bob out of here

Keep an eye on this bill, because it will make Cook County Assessor an appointed position. It was one of those late Friday filings. We all know who Preckwinkle will appoint.
http://www.ilga.gov/legislation/BillStatus.asp?DocNum=3605&GAID=15&DocTypeID=HB&LegId=120293&SessionID=108&GA=101

8
Admin
Mark Glennon
Reply to  bob out of here

2
Illinois Entrepreneur
Reply to  bob out of here

The level of contempt that Illinois politicians have for their constituents is nothing short of astounding. What will it take to wake this sleepy group of voters up?

Try and contact your State Representative or Senator. I’ve tried for years and never been able to get a return call. Emails are a pre typed reply based on subject. “Contempt”? They know the sheep will continue to vote them in.