Glance at the list of the Civic Federation’s Trustees and you’ll see a collection of Illinois corporate titans. Many of the 16 men and one woman are CEOs, heads of private equity, chairs of boards, investors or hugely successful entrepreneurs. The trustees are listed in the appendix below.

I worked with heavy hitters like these during my career in international finance. They all achieved their success by being demanding investors and great stewards of their shareholders’ money. None of them would ever ask shareholders to pour money into a dysfunctional, bloated and mismanaged company without first ensuring they could clean house.

So it’s surreal to read the Civic Fed’s 2019 recommended budget plan for Illinois. Year after year the group continues to ask Illinoisans to pour billions of dollars more into the corrupt and nearly-bankrupt corporation that is the state of Illinois – while demanding little to none of the hard hitting reforms its trustees would demand with their own money. 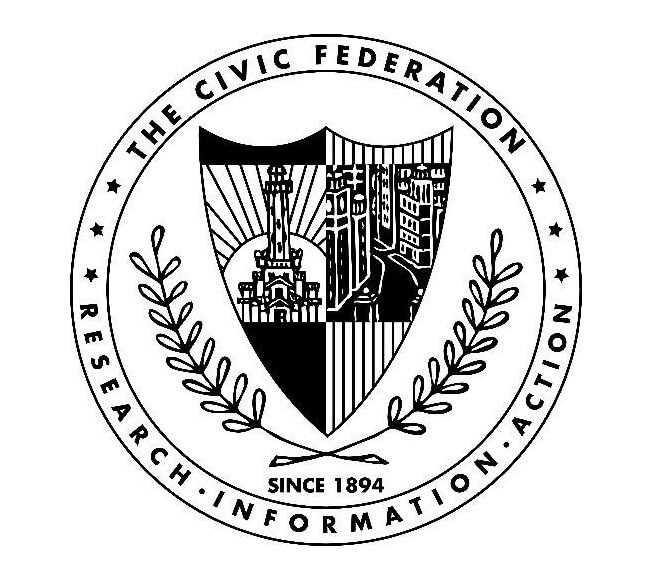 Why would the trustees propose plans that are so antithetical to the investment and management principles that led them to their individual successes?  Even the Civic Fed’s own stated goal is “to maximize the quality and cost-effectiveness of government services in the Chicago region and State of Illinois.”

In the real world, before a penny is ever invested in failing companies, heads would fly, corruption would be rooted out, fat would be cut, governance laws would be re-written, fiscal discipline would be imposed, duplication and overlap wiped out, and departments shut down. Whatever debt was bankrupting the company would be reformed and restructured. Those are the rules of the game when shareholders agree to fund a turnaround: accept the massive changes or no investment.

But what the Civic Fed recommends to Illinoisans contains virtually none of those requirements.

Now, some at the Civic Fed might argue that managing governments is different. That running a government and helping Illinois’ poor and most vulnerable requires a different tack.

My response is: For sure, but if you think the current system with its current leaders is taking care of Illinois’ most vulnerable, you are grossly mistaken. In fact, everybody is losing right now. Taxpayers are burdened with some of the highest taxes in the nation. Retirement security has collapsed for government workers. And Illinois’ most vulnerable have seen programs cut as social services are increasingly overwhelmed by a dysfunctional government.

Illinois has been trending downward for decades. Nothing has changed that. More money certainly won’t.

Just last year, Illinoisans were forced to hand over $5 billion in additional income taxes. Yet the state is still running a deficit this year, just as it has every year going back to 2001. And the 2019 budget, based on tricks and gimmicks, will probably be $1.5 to $3.5 billion short.

So it’s maddening that the Civic Fed is asking for even more money from taxpayers – this time from expanded sales taxes and a tax on retirement income. And even that’s not enough. The Civic Fed also wants a progressive income tax.

The Civic Fed matters. It has an oversized influence on policy and politics – even if it can’t directly implement any reforms itself. No, it can’t force Madigan and the other leaders to do the right thing, but when it unites other groups in a common cause, it can exert tremendous pressure on politicians.

I can’t tell you why the Civic Fed doesn’t demand more for the Illinois “shareholders” it claims to represent. But I can tell you what its plan might look like if the trustees were each investing their own fortunes. It would follow the same rules and principles that made them and their businesses all successful in the first place. Here are a few:

Throw out management – The first step in any turnaround is to remove failed management. The Civic Fed should demand the resignation of the legislative leaders that have bankrupted the state. The most pressure should be placed on House Speaker Michael Madigan, who, more than anyone else, has overseen the long, slow decline of this state into complete dysfunction.

Rewrite the governance laws – Two years ago, I wrote about how Madigan’s house rules make a mockery of the democratic process in Illinois. No new structural reforms will happen without changes to how laws are passed. Power must be devolved from the Speaker and given back to the legislature. In addition, the Civic Fed should demand redistricting reform. Legislators shouldn’t be able to choose their voters.

Streamline operations – End duplication and overlap. In Illinois’ case, that means dramatically cutting its 7,000 units of local government – the nation’s most. That starts with the most expensive and least efficient units: Illinois’ 850 school districts.

Reduce labor costs – Demand reforms to employee healthcare, salary and overtime costs to bring down the state’s operating costs. That means changing collective bargaining laws so both the state and local governments can negotiate costs taxpayers can afford.

Restructure debts – The Civic Fed should be demanding politicians pull all levers at their disposal to slow down and cut the state’s enormous debts – especially pensions. That includes forcing unions to negotiate, freezing salaries and cutting headcounts when they won’t, and moving to all new workers to 401(k)s going forward. At the local level, allow for local bankruptcy when cities have no other options.

Realign costs – One unit of government shouldn’t be doling out benefits while another one pays for them. It’s dysfunctional and corruption-prone. End the state’s payment of local school district and university annual pension costs.

Simplify accounting – Before taxpayers are forced to hand over more money – if any – the Civic Fed should demand every bit of spending be properly budgeted. Bogus accounting has to be prohibited.

Illinoisans need civic leaders and institutions that act as the champions of the people. In the era of corrupt governors, downgrades, oppressive debt, punitive taxation and shrinking populations, people need somewhere to turn to other than politicians.

They need a Civic Federation that demands responsibility and results from government in the same way they do from the private sector. 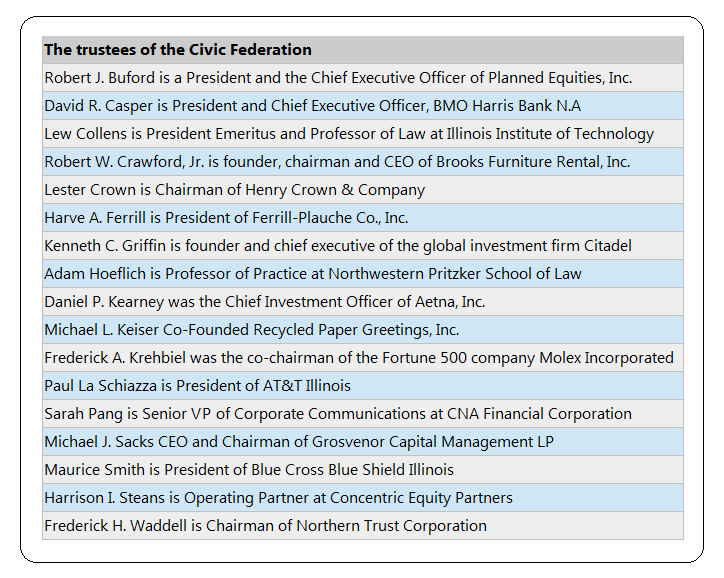 what hi income civic federation types and cook county dem machine types really want is for Chicago/ Illinois to turn into California–where low to middle income folks are forced out while hi-income 30 somethings move in. all the while posing as compassionate progressives. unfortunately for them, hi income folks aint moven in, just moven out.

You will notice in the above article by Ted, no mention of the billions lost each year to the “fraud tax” – the cheating and grifitng that is rampant. Link Cards 50 cents on the dollar (PIN included), unemployment, comp – you name it.

Ted, how bout you turn your acumen to a comprehensive study of the totality and cost of the citizens of Illinois cheating it.

Like the above, it always seems to duck the discussion. Granted they are a scarier bunch than the elderly retired and would take guts to tackle.

They should all read “The Illinois Pension Scam” ($2.99 on Amazon), an unedited book that might change their minds. Your editorial reminds me of the new school Board in Philly. The school district of Philly is returning to local control after 14 years of state oversight. There were hundreds of applicants for the Board most of whom probably don’t know how to read a balance sheet. The new people who were appointed by the Mayor are all heavy hitters who are doctors, lawyers, and non-profit managers but do any of them really think they can make Philly Schools great again… Read more »