With just days left for Illinois legislators to agree to a new state budget, don’t expect them to make the tough decisions necessary to reverse the direction the state is in. After all, it’s an election year.

The media is reporting that all is quiet on the negotiating front, which confirms no real reforms are being debated. Illinoisans can expect the same financial and accounting gimmicks to keep the state’s financial games going.

The decline in Illinois has gone on long enough – certainly long enough to know the status quo isn’t working. To demonstrate, we’ve put together a list of trends that capture much of Illinois’ collapse.

The list could be much longer and more depressing, but the ten items below show the sort of reforms lawmakers should be adding to the budget.

The first four trends revolve around the state’s chronic budget deficits. Illinois’ budget is being swallowed by out-of-control Medicaid, pension and state worker costs that far exceed Illinoisans ability to pay for them.

1. Medicaid. Medicaid is supposed to be a safety net for our most vulnerable populations – children, seniors and disabled adults. They should be our priority. Instead, enrollment in Medicaid has ballooned to include 3.1 million Illinoisans – nearly 25 percent of the population. The program is now collapsing under its own weight and those being squeezed out of access to health care are, ironically, Illinois’ most vulnerable.

Booming enrollments, including 675,000 able-bodied, single adults, have led to booming expenditures. Medicaid spending more than doubled between 2000 and 2018 and now consumes more than 20 percent of the state’s general budget. Medicaid, combined with ever-rising pension costs, threatens to bankrupt Illinois.

Lawmakers should scrub the Medicaid rolls to ensure only eligible people receive services, request a block grant from the Federal government, and implement work requirements for single, able-bodied adults so Medicaid can focus on those most in need. Most importantly, Illinois needs jobs and a thriving economy. Financial independence is the best way to get people off Medicaid. 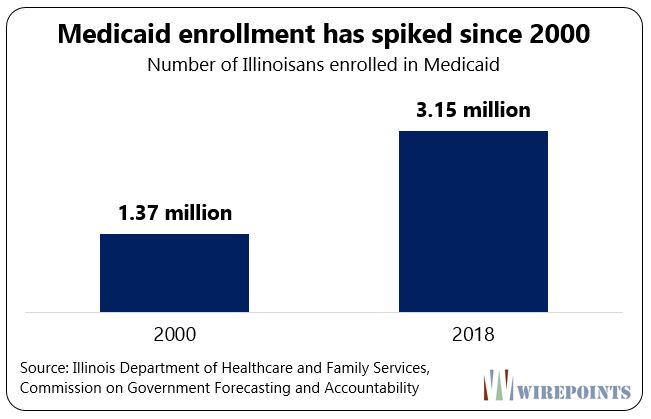 State worker salaries grew more than 40 percent between 2005 and 2015, the last year AFSCME had a contract with the state. During that same period, median private-sector earnings in Illinois grew only 11 percent, half the rate of inflation.

The governor’s last, best contract offer to AFSCME – which calls for a salary freeze and for workers to pay for 40 percent of their healthcare costs – would cut down on the disparity between state worker compensation and taxpayers’ ability to pay for those benefits. 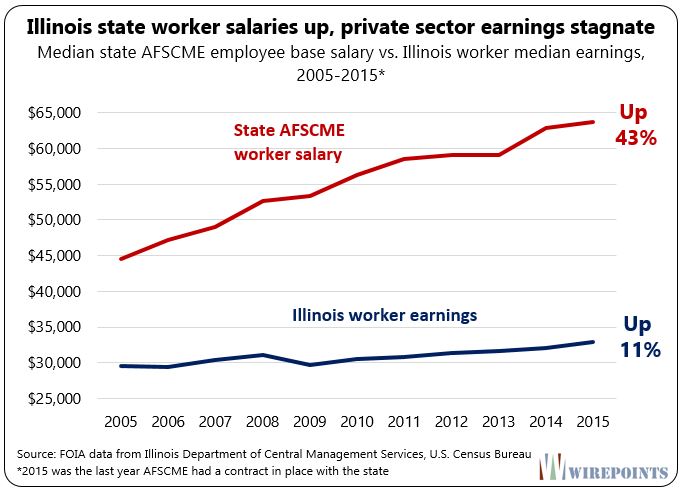 3. Pension promises. Total pension benefits owed to state workers and retirees are swamping the Illinois economy and taxpayers’ ability to pay for them. Benefits grew 1,061 percent between 1987 and 2016. That’s eight times more than household income growth (127 percent) and nearly ten times more than inflation (111 percent) over the period.

A full fourth of the state’s general budget now goes to pay for pension costs. And according to projections, things will remain that way for the next 25 years.

Salary freezes, headcount reductions, consolidation of governments, the elimination of pensionable perks, and restructuring/bankruptcy options – all need to be implemented until a constitutional change can be made. 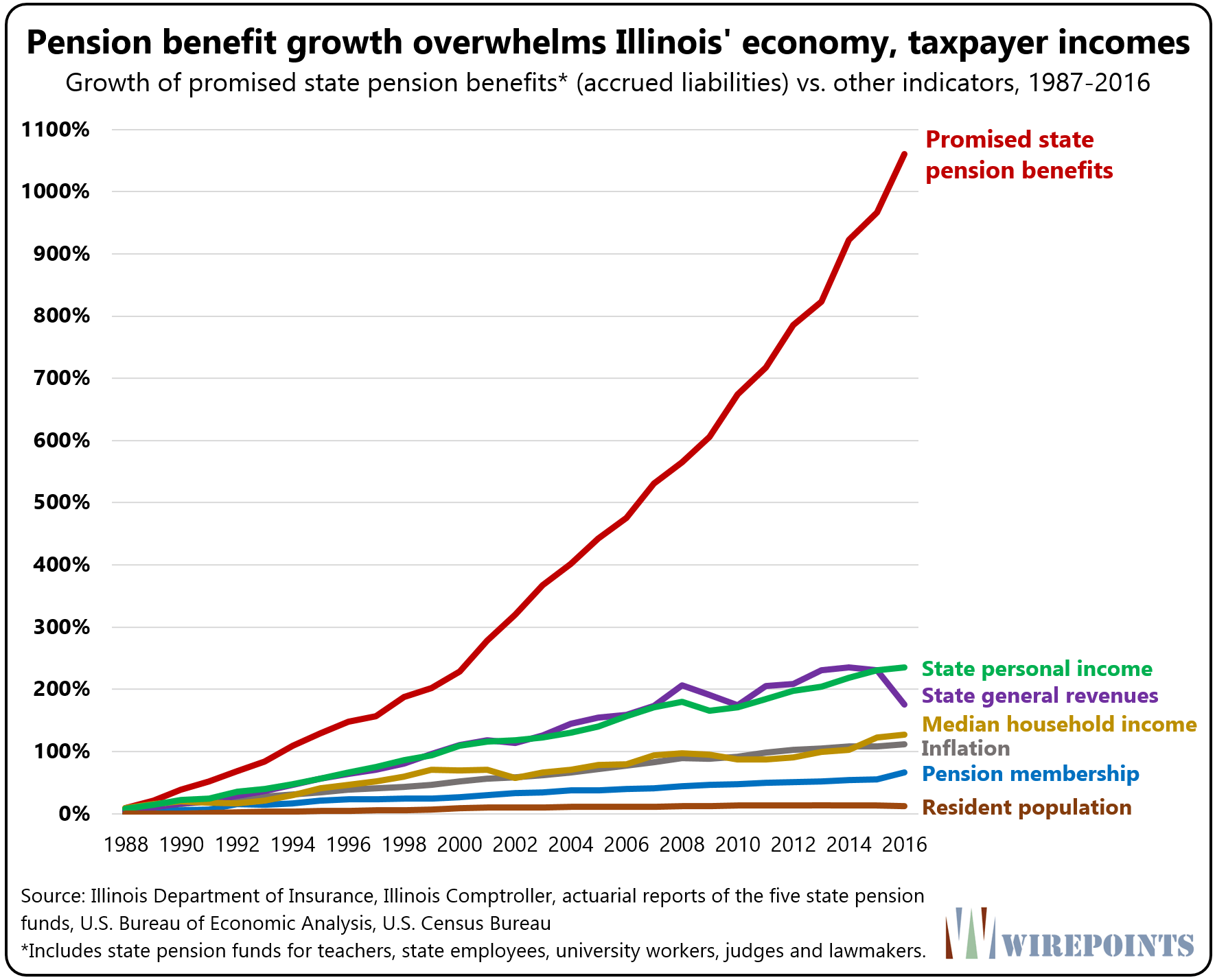 4. Unpaid bills. Illinois politicians have spent more than they take in year after year. It’s why Illinois has been running an unpaid bill backlog since at least 2001, the last time Illinois had a truly balanced budget.

Unpaid bills reached as high as $9 billion in 2013, three years before the recent budget impasse even began. At their peak, unpaid bills hit a high of $16.7 billion. 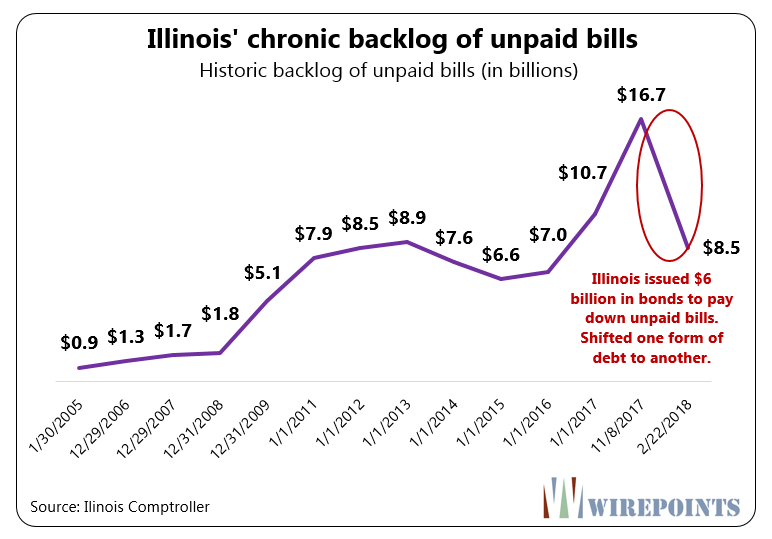 The next three examples revolve around keeping people in Illinois. People are finding it hard to stay due to a lack of jobs, growing tax burdens and high education costs.

5. Manufacturing: Since 2000, Illinois has lost more than 300,000 manufacturing jobs, or nearly a third of its manufacturing base, to other states and countries.

Since the Great Recession, Illinois has recovered just 24,000 manufacturing jobs. Meanwhile, Wisconsin and Indiana, both half the size of Illinois, have recovered over 56,000 and 96,000 jobs, respectively. Michigan has recovered 150,000 jobs.

Every day that lawmakers refuse to pass commonsense reforms to workers’ comp, property taxes and labor rules is another day Illinois becomes less competitive compared to its neighbors. And that means fewer good middle- and working-class jobs for Illinoisans. 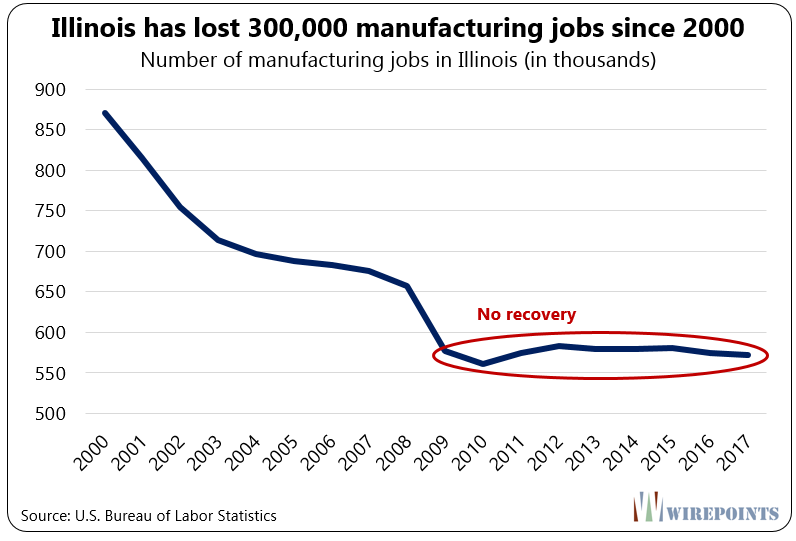 6. Property taxes. Illinoisans’ incomes have been stagnant for years. Between 2000 and 2015, median household incomes increased by just 24 percent, far short of inflation. In contrast, total property taxes across the state have grown 100 percent over the same time period.

Lawmakers can cut tax burdens by enacting a comprehensive property tax freeze. The freeze should remove burdensome state mandates on localities and give communities control over their retirement systems. 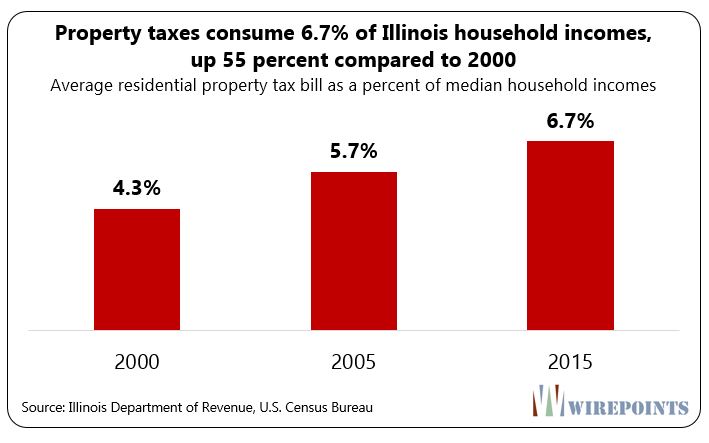 7. Higher Ed tuition. A near doubling of higher ed tuitions are pushing thousands of Illinois students out of state each year. In 2014 alone, The New York Times reported Illinois lost a net 14,000 students. That year’s loss was part of a long-term trend.

High tuitions aren’t due to a lack of state funds. The state appropriates far more to higher ed than its neighboring states do. Instead, they’re using tuition dollars to fund more high-paid administrators. Since 2005, the number of university administrators in Illinois has grown 26 percent even as student enrollment has dropped 3 percent.

Too many administrators, executive style pay and excessive pensions are pushing up higher ed costs. Keeping students – Illinois’ future – in the state means bringing down those costs in line with peer states. 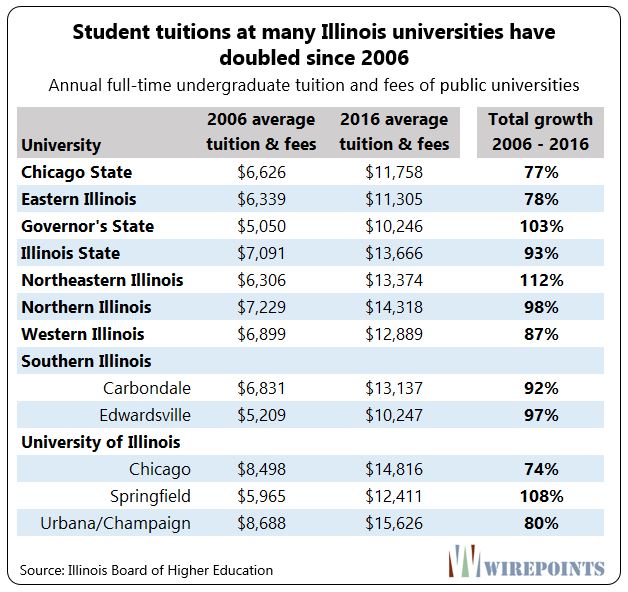 The last three trends demonstrate the impact of Illinois’ decline. Nothing better captures Illinois’ collapse than the state’s collapse toward a junk rating. Except, of course, the fact that residents are leaving in droves.

8. Credit downgrades. Illinois’ credit rating has been downgraded 21 times by the big three rating agencies since 2009. It’s clear they don’t like what politicians are doing, and yet politicians continue to do the same things. 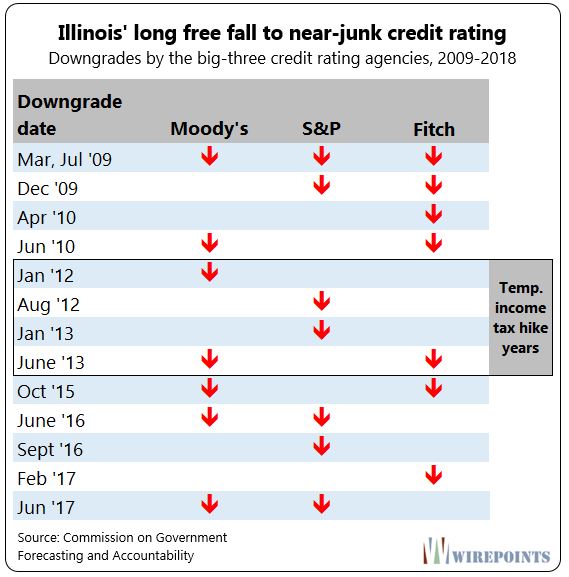 9. Outmigration. Residents have been leaving at an alarming rate to find better opportunities in other states. From 2000 to 2017, Illinois lost a net of more than 1.3 million people to other states. That’s the equivalent of wiping Aurora, Rockford, Joliet, Naperville, Springfield, Peoria, Elgin, Waukegan, Cicero, Champaign and Bloomington off the map.

It will only get worse without reforms. A 2016 survey by the Paul Simon Institute found that 47 percent of Illinoisans polled said they want to leave the state. Their number one reason for wanting to leave? Taxes. 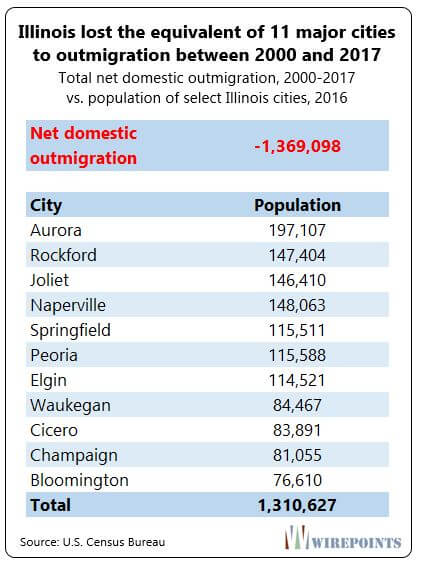 10. Population loss. What’s worse, domestic outmigration has reached such a high level that births and international immigration no longer offset those losses.

Illinois’ total population has now shrunk four years in a row. That’s a sad distinction shared only with West Virginia. 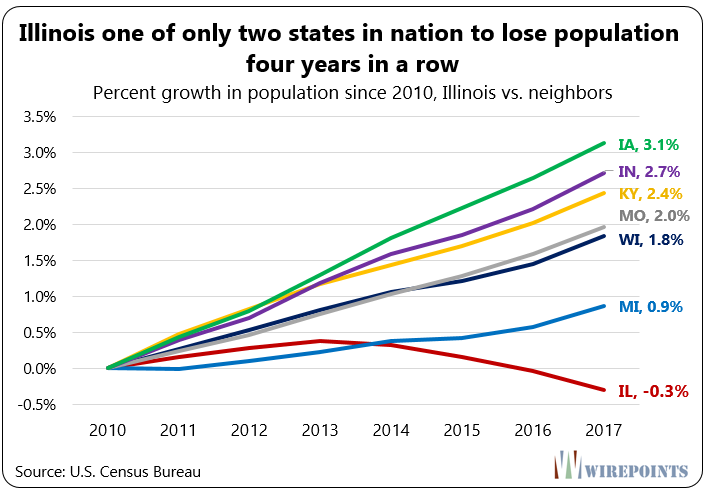 All the facts above point to a state in steep decline. The single fact that Illinois has actually lost population four years in a row is evidence enough that Illinois is in deep trouble.

Yet all politicians do is offer Illinoisans more of the same. Overborrowing, overspending, higher taxes and corrupt budget practices haven’t turned around Illinois. It’s time to try the opposite.

Illinois has to crash and burn before it can rise again — if it can.

Nothing will be dealt with, and Madigan and Rahm will be kings of an ash heap.

Imho the rating agencies have done more to hurt Illinois residents than all of the above. By keeping the ponzi scheme going too long, and creating a market where misery and exploitation of the taxpayer has turned us into a commodity like cattle. The politicians, constitution and the rating agencies are in collusion to suck all private capital to govt and to bondholders profit. These agencies intentionally deny the existence of a ponzi scheme.

People continue to ignore the fact the the Constitution was approved by the convention AND the voters and taxpayers. This public vote came after the legally required pamphlets and news stories. All the General Assembly had to do was meet the “required” (and I use the term loosely) payments. 80% of this “required payment” (if made) next year will go to past abuse. Just like credit card. I collect a pension from TRS. You hate me. I don’t hate you. So sad the General Assembly turned one citizen against another. So needless.

Public sector unions significantly influence the vote. Per the WSJ “But unions spend far more money on a wider range of political activities, including supporting state and local candidates and deploying what has long been seen as the unions’ most potent political weapon: persuading members to vote as unions want them to.” Then when those politicians the unions wanted get elected, they cause the following problems (per illinoispolicy.org) : – Politicians grant workers overly generous pension benefits that taxpayers can no longer afford. – Politicians use pensions as a political slush fund. – Pension plans are inherently flawed and unsustainable… Read more »

Again,not a mention of the :”fraud Tax” , just the elderly retired. The pensions were doable, but like credit card not if you don’t make payments. Take the billions from the cheating and apply that to the pensions for the last 25 years – no problem. But you don’t mention the frauders, like most. I understand your timidity, they are a scary bunch! Easier to go after the elderly.

Bob, unfunded pension liabilities are an enormous problem. You’ve said nothing which rebuts my statements – you’ve only directed attention to areas which may or may not have the same urgency. Please provide a link/data which shows that costs of tax fraud in Illinois are comparable to the $203B and climbing total debt for retirement benefits in Illinois (illinoispolicy.org).

You left out, as everyone does, the billions lost each year to the “fraud Tax” – link cards (50 cents on the dollar with PIN), Workman’s Comp, Unemployment, you name it. Now, I always wonder why everyone (except me it seems) is afraid to bring it up. Yes, much safer to go after the retired elderly than the cheaters.. They are a scary bunch! Come on boys, be men!

Apparently even the Dems have a point where they admit that something costs too much money. SB562, the single payer health plan in Calif. isn’t going anywhere because even the Dems think the state can’t afford it.