The perils of letting politicians dole out taxpayer dollars to corporations as investment “incentives” was on full display in Wisconsin recently. New reporting finds that the price tag to taxpayers for winning the Foxconn facility will be $4 billion, not the $3 billion originally reported.

That may leave Wisconsin taxpayers holding the bag for decades – if they ever recoup those costs at all.

Wisconsin politicians last year granted the electronics manufacturing company a reported $3 billion in state tax credits to locate a factory in their state. It’s one of the largest taxpayer-backed incentive packages ever promised to a corporation to locate a facility in the U.S.

While Foxconn’s factory was being celebrated as a major win in Wisconsin, some analysts were already questioning whether the $3 billion subsidy would ever be recouped by taxpayers.

According to the state’s own estimates, it will take until at least 2043 for Wisconsin to recover the costs of the taxpayer subsidies.

And Wisconsin residents are now finding out the price tag is much higher than Wisconsin politicians originally advertised. When all local and state “incentives” given to Foxconn are added up, the sweeteners total more than $4 billion. Local government costs include infrastructure investments in roads and highways, sewer and power lines.

That enormous sum has already had a negative impact on the state’s local governments. As Wirepoints previously reported, Racine County suffered a credit downgrade from Moody’s Investors Service due to the $400 million in incentives its politicians promised Foxconn.

The Foxconn deal is risky for state taxpayers. Whether it will pay off remains to be seen.

Regardless, the deal is still a perfect example for everything wrong with the whole practice of letting politicians hand out taxpayer dollars as a subsidies.

The bottom line is politicians are gambling with taxpayer money to give corporate handouts.

This all serves as a warning for Illinoisans and their state’s own subsidy programs.

Illinoisans already know their politicians are corrupt. The Berrios-Madigan-Burke property tax assessment scheme in Cook County that enriches politicians and select companies at the expense of poor residents is evidence enough of that.

And these are the same politicians that promised schemes like the EDGE tax credit program would deliver stellar economic returns, but instead have cost taxpayers billions with little result.

Since 2000, the state has spent $1.5 billion on EDGE credits, yet the program has brought in just 37,000 jobs. Rather a poor record considering Illinois still hasn’t created a net new job since the year 2000. In contrast, Illinois’ neighboring states have each added more than 100,000 net new jobs since then. 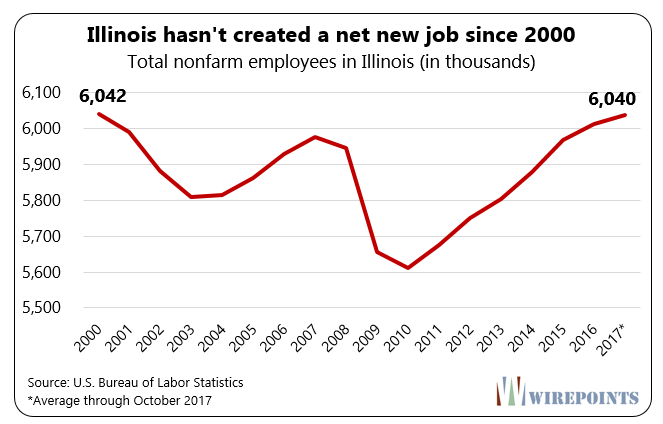 Bribing a few select companies with others’ tax dollars so they come to Illinois is no way to build a successful economy.

Illinois must instead enact pro-business reforms – including lower taxes – that make the state competitive again. As the nation’s fifth-largest economy, companies should want to be here without needing bribes. And if Illinois thrives, they’ll have to be here if they want to succeed.

The new federal tax cuts to corporations should have been conditional. #1 You will get a generous permanent tax break if you build and invest in inner cities around the country. #2 No local property tax or state incentives because the tax breaks will be paid for by local taxpayers thru PTELL. #3 No STOCK buybacks or bonuses for top executives just moderate bonuses for employees. This is what I would have insisted if I were the Prez. This could have been a win-win for everyone without much backlash from either party.