The latest news about the state’s biggest employee union, AFSCME, could upend Springfield’s celebration of a “balanced” budget in 2019.

According to INN, AFSCME has won yet another legal battle in an attempt to get $412 million in unpaid raises, called step increases, paid to state workers. And if that comes to fruition, lawmakers can expect more critiques of their “balanced” budget claims.

That 2019 budget already relies on iffy savings including a pension buyout, the sale of the Thompson Center and fund sweeps from other accounts – not to mention it significantly underfunds the state’s true pension payment – so it was never truly balanced to begin with. A ruling for AFSCME can only make things worse.

The state and AFSCME haven’t had a labor contract in place since the last one expired in June 2015. Since then, AFSCME salaries have been frozen. But the latest ruling by the Illinois Labor Relations Board (ILRB) means the state will likely have to honor the step increases – built-in automatic increases over and above normal pay raises – that were in place in the previous contract.

Ironically, that means many AFSCME workers could see pay increases even if their union won’t agree to a contract. And if they get their way, it will be expensive.

The step increases alone will cost the state – and taxpayers – $412 million in total. That’s the cost to make up for the lost step increases since July 2015 through 2019, the soonest Illinoisans might expect a new state contract with AFSCME. (It’s unlikely the union will reach any sort of deal with Gov. Bruce Rauner before the general election.)

That repayment will knock another hole the 2019 budget. The budget wasn’t balanced before, but adding another $400 million in spending will demolish any politician’s claims that revenues will match expenditures next year. 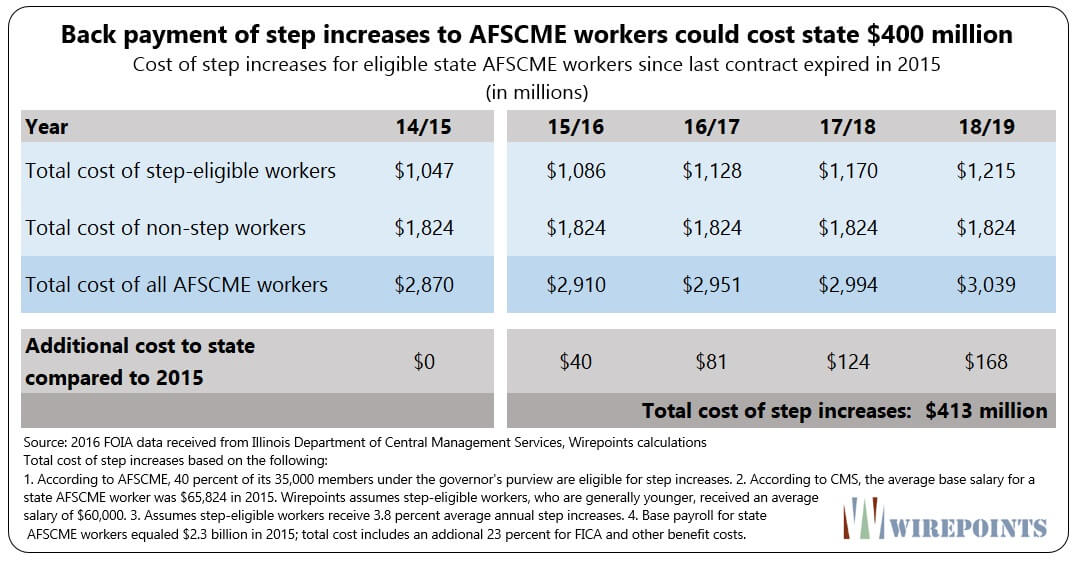 The generous benefits of state workers

The state’s struggle with AFSCME runs counter to what been negotiated with 19 other labor unions in Illinois. The other, smaller unions agreed to salary freezes and other concessions in light of Illinois’ financial difficulties.

Their additional demands are extreme considering what they’ve gotten in the past. State AFSCME worker salaries grew more than 40 percent between 2005 and 2015, the last year the union had a contract with the state. Meanwhile, the earnings of ordinary Illinoisans grew only 11 percent, half the rate of inflation. 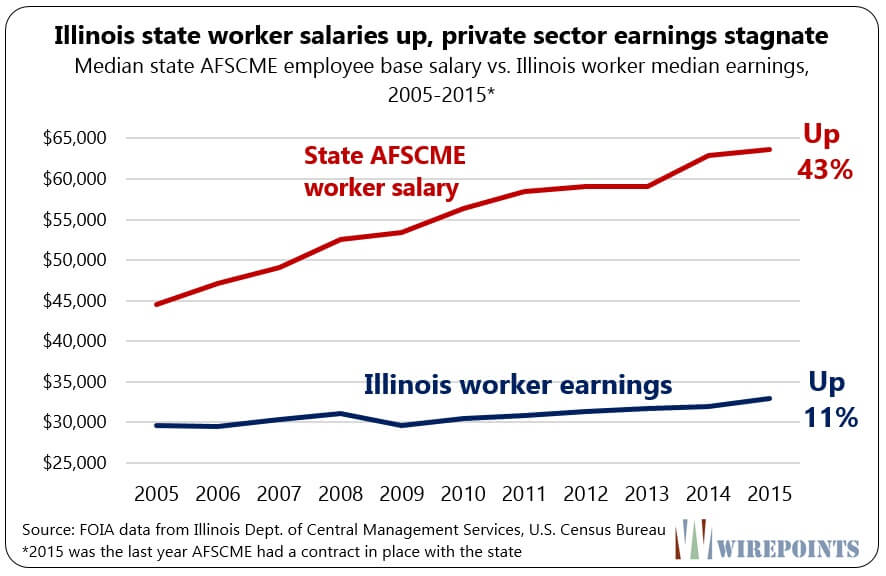 In fact, Illinois state workers are the 2nd-highest paid in the nation after you adjust for cost-of-living, based on the most recent numbers available from the Bureau of Economic Analysis. 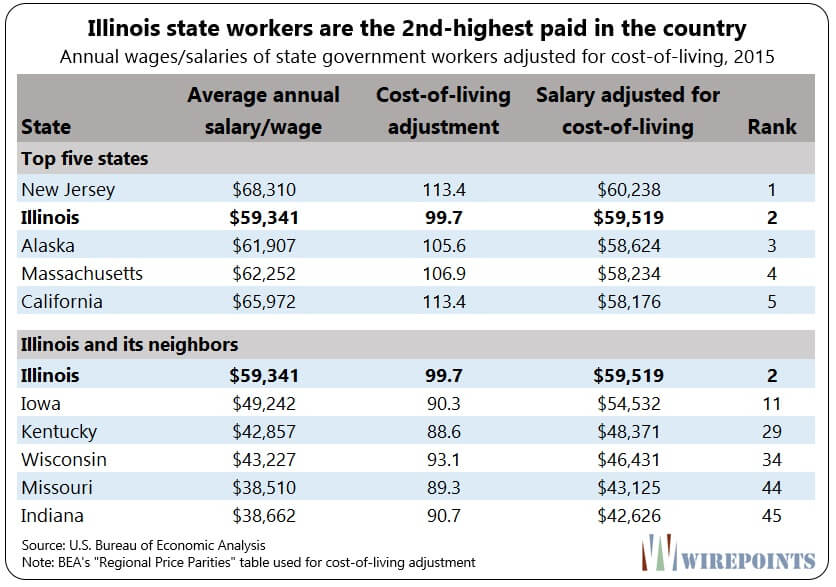 Taxpayers also pick up most of state workers’ health care costs. And in retirement, career state workers get free health insurance and will average over $1.6 million in lifetime pension benefits – on top of Social Security.

In all, our previous work shows the average state worker receives nearly $110,000 in total compensation.

Many of same lawmakers who call the budget balanced also support AFSCME’s back-pay demands. And they know the final order to pay out those raises is likely to happen in 2019. Yet they didn’t set aside $400 million to actually pay for the built-up raises if the union got its way.

To pay AFSCME, the legislature will have to cut money that other departments and social services were expecting to receive. Or more likely, they’ll borrow money, increasing costs on Illinoisans. Or they could even put off actually paying AFSCME workers for years, like they did as result of the 2011 state worker dispute.

This is a raw deal for ordinary Illinoisans. The 2019 budget is just another agreement between politicians that disrespects the ordinary residents of this state. Now the AFSCME ruling is likely to add insult to injury – driving up state costs that struggling taxpayers can’t afford.

Will Illinois budget negotiations reverse the 10 trends dragging Illinois toward insolvency, or simply perpetuate them?