Working-class Michiganders have a reason to celebrate. Lower taxes, right-to-work reforms and a successful diversification away from the auto industry have led to more manufacturing jobs today than the state had before the Great Recession.

Michigan has had the most successful recovery among the manufacturing states in the Midwest.

In contrast, Illinois has had the worst recovery. Higher taxes, onerous labor laws and a rejection of the deregulation wave mean Illinois still hasn’t gotten back to the number of manufacturing jobs it had before the recession. Over 88,000 jobs are still missing.

In fact, Michigan’s recovery has been so great, and Illinois’ so poor, that Michigan now has more manufacturing jobs than Illinois.

In 2007, Illinois had 70,000 more manufacturing jobs than Michigan did, according to the U.S. Bureau of Labor Statistics. Today, Michigan has 40,000 more. 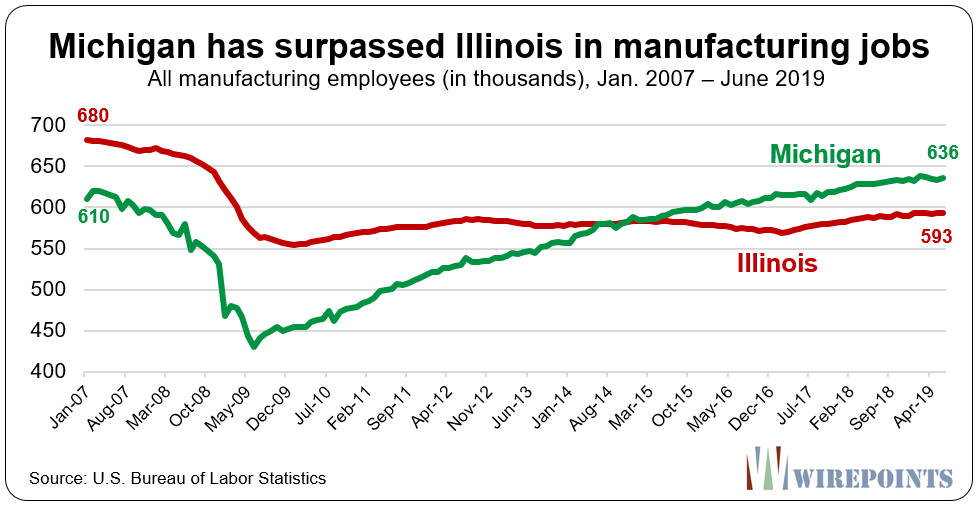 Only two of the manufacturing states in the Midwest have recovered the manufacturing job losses caused by the Great Recession. Michigan has added nearly 25,000 jobs when compared to 2007, while Iowa just squeaked into positive territory with 900 more jobs. 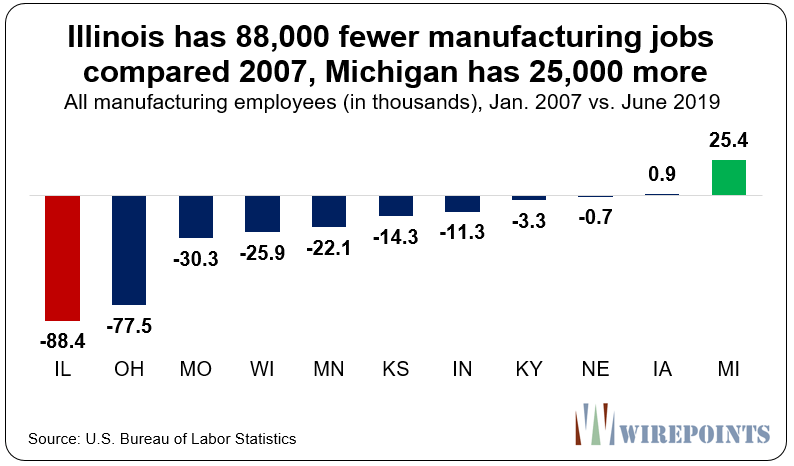 Illinois’ anti-business atmosphere likely has a great deal to do with its poor manufacturing recovery. Illinois has restrictive labor rules compared to its neighbors and many states across the country. And companies have to deal with one of the highest tax burdens in the country, including the nation’s highest property taxes.

Illinois lawmakers have done little to reform any of that since the Great Recession. And some things, like the tax burden, have only gotten worse.

In comparison, Illinois’ neighbors have passed numerous pro-business reforms – from right-to-work laws to tax cuts to collective bargaining restrictions – since 2007.

Michigan’s strong growth likely has a lot to do with its passage of right to work in 2013, its 2011 tax reform and the diversification of its manufacturing sector from autos.

According to James Hohman from the Mackinac Center, “one out of 15 jobs in the state was in auto manufacturing in 2000. Now it’s just one out of 25 jobs.” That’s a big deal considering that from 2009 to 2016, manufacturing accounted for one of every three new Michigan jobs.

Michigan should continue what it’s doing to generate more jobs for the working class. Meanwhile, Illinois should take a page out of Michigan’s playbook.

WE’ll see what happens now with a good governor

Likely not much, seeing as he is committed to maintaining Illinois’ higher taxes, onerous labor laws and its rejection of the deregulation wave.

Your govenor has scared away FCA investors. Your on a steady decline, with over thousands a yearmoving to Michigan. Good luck with corrupt Democrats.

Michigan has a matching contribution plan for quite some time now (1997?) and Illinois has defined benefits which are unsustainable.

The disparity between Michigan and Illinois manufacturing jobs is even worse when you consider the fact that Illinois has about 2.75 million more people (based on Census Bureau 2018 Population Estimates). Another telltale, is that during the 2010 to 2018 period, Michigan’s population increased by about 100,000 while Illinois’ population decrease by about 90,000.

Mark, Ted and John, were you aware that Michigan Republicans recently suggested a sizeable pension obligation bond as a means of freeing up more money for roads? POBs apparently aren’t just for broke governments like Chicago and Illinois.

Thanks, Andrew. Yes, I was made aware of that today from folks in Michigan. POBs and “reamortizations”. Sounds like straight from Illinois and Ralph Martire. We’ll be writing about that soon.

ILL voters went for Hillary by a landslide. Michigan squeaked out a win for Trump.
If ILL voters would start voting Republican, maybe the state Constitution would have a chance to be amended to permit pension cuts for govt ees. But that won’t happen, so the Dems-in-charge will keep implementing more and more taxes.

… and I’m betting the difference between Illinois and Michigan looks even worse for Illinois in June 2020. Any takers?

May 24, 2020
The Illinois General Assembly has finally passed an emergency budget for 2021  Tax revenues have taken a severe hit due to the impact of the shutdown in response to COVID-19, yet that hasn’t stopped lawmakers’ spending priorities. The state will spend a record $42.9 billion while bringing in just $36.8 billion.
View Comments (12) | Add Comment