Illinois’ political elite have signaled time and again they want to tax Illinoisans’ property more than they already do. Some Chicago Fed economists want a statewide property tax to pay for pensions while Chicago Mayor Lori Lightfoot wants a real estate transfer tax for the same thing.

They obviously don’t care about how much damage the state’s failed policies have already inflicted on Illinoisans’ property values.

A Wirepoints review of median home values across the nation found that Illinois ranked 45th in median home value growth between 2005 and 2017, according to the U.S. Census. The earliest available census data is from 2005.

Illinois home values only increased a paltry 6 percent over the entire period, far short of inflation, which was up 26 percent.

In contrast, home values in the top 10 states increased by 54 to 120 percent. 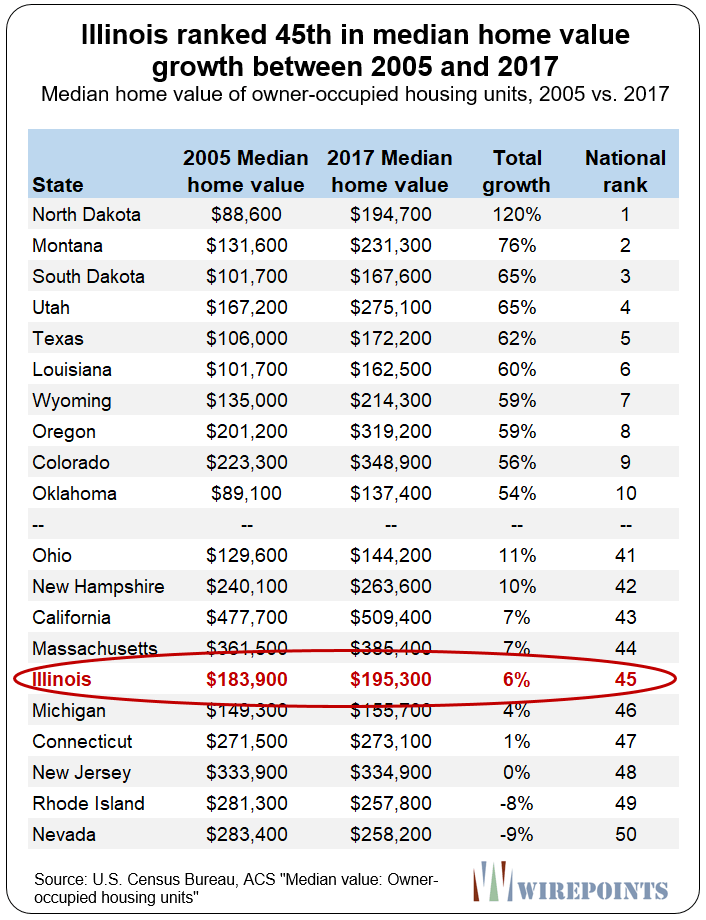 Many people rely on their homes to provide for their financial and retirement security. Often times, that’s where their entire net worth is. The more values grow, the better off residents are.

In Illinois, politicians have destroyed residents’ ability to create wealth through homeownership.

By comparison, Illinoisans’ neighbors all saw their nest eggs grow.

Iowa and Kentucky median home values grew 40 and 36 percent, respectively. Missouri and Indiana’s grew between 25 and 30 percent. And even slower-growing Wisconsin still saw its median home values increase 17 percent – triple that of Illinois’. 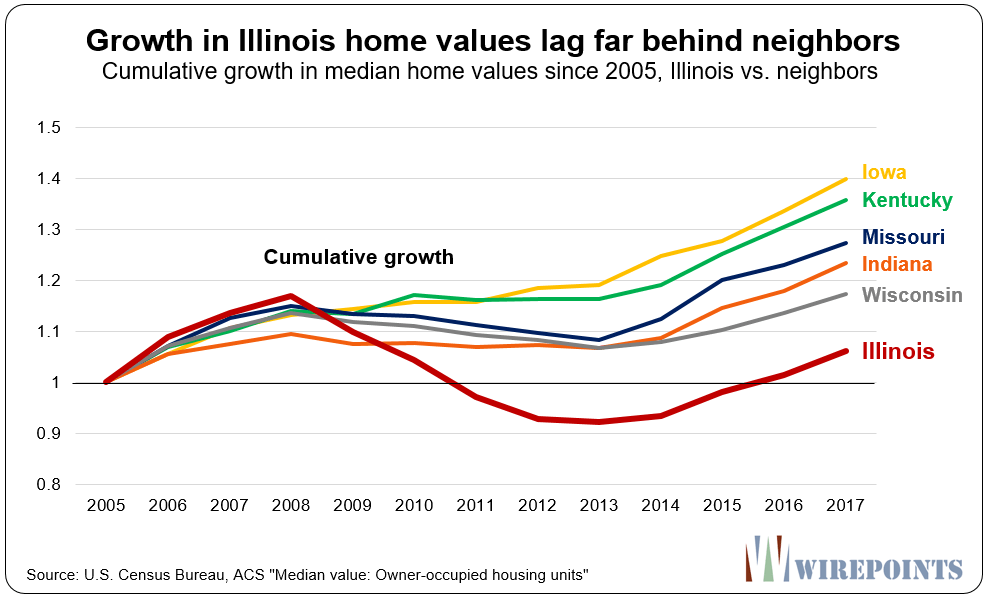 In fact, Illinoisans would be tens-of thousands of dollars richer today if their home values had just managed to grow at the national average.

Chicagoans in particular have been hit hard since 2000 when it comes to their home values. Windy City residents would have been far better off today if they’d owned property in any of the other nine cities that make up the Case-Shiller 10-City Composite Home Price Index.

Home prices in the Windy City have grown just 44 percent since 2000. By comparison, inflation was up 46 percent over the same time period.

Meanwhile, home prices in Los Angeles grew four times that of Chicago’s, or 181 percent. Prices in Miami, up 143 percent, and Washington D.C., up 130 percent, have grown three times more than those in Chicago. 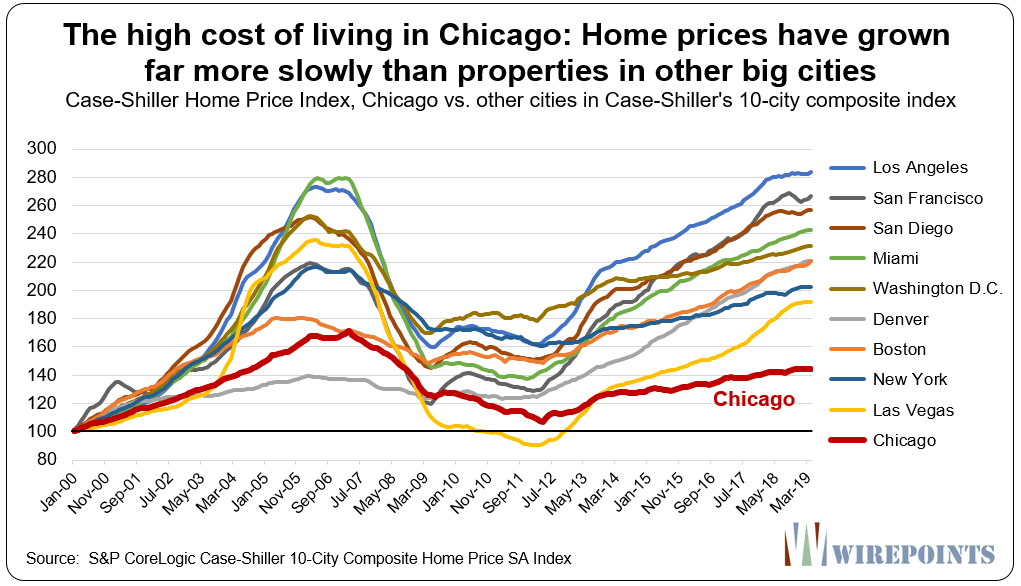 Even Las Vegas – which suffered a big collapse in values during the Great Recession – has seen its home prices rebound and grow double that of Chicago’s.

There’s no need to debate precisely why Illinois’ growth in home values is so much worse than in other states. There are plenty of reasons. Anemic income growth. Too much state and local government debt. Rampant political corruption. Disappearing working- and middle-income jobs. And the nation’s highest property taxes and the stream of out-migration have something to do with it, for sure.

Another way to say all that is Illinois politicians have run the state into the ground with decades of failed public policies.

And look for their next “big idea,” a progressive income tax scheme, to make things far worse.

Read more about how slow-growing property values and rising taxes drive Illinoisans out of state: 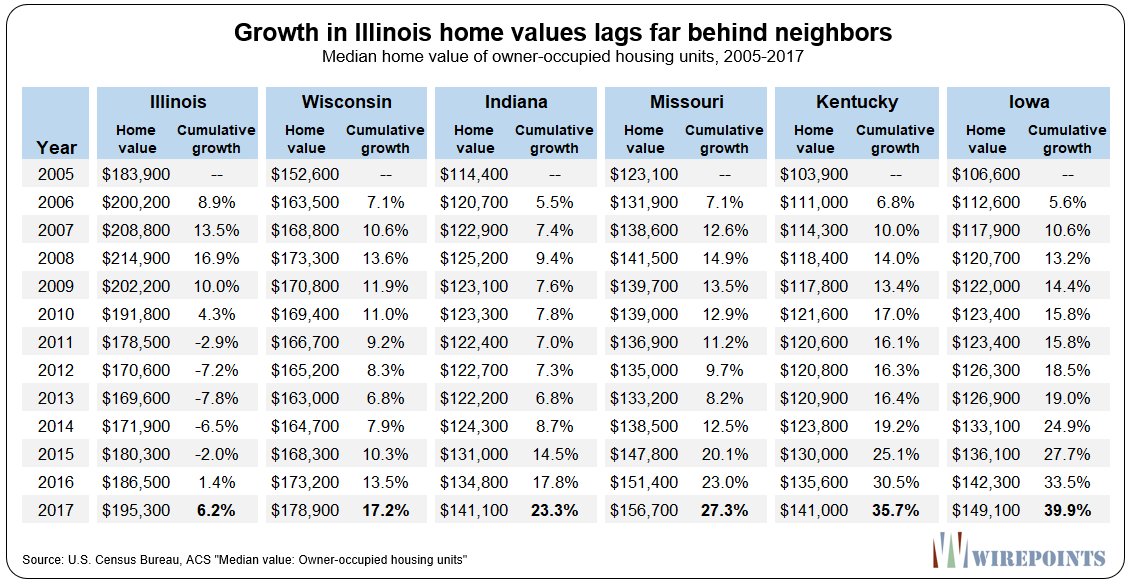 I have been living in Indianapolis since 2014. This year, I bet I see no less than 50-60 cars per day with Illinois plates.
Trust me on this, there is a mass exodus going on in Illinois.

I knew this train wreck was eventually going to happen back in 2003. That’s when I found out about the, “retirement escalators” in teacher union contracts.
Those greedy union teachers SPIKED their salaries, starting 4 years prior to their retirement. God only knows how much more that put on Illinois’s unsustainable pension obligations.

Picking the high of an exceptional bubble as a starting point is somewhat misleading. But the point still stands. I held onto a decent property in SW suburbs bought in 2002, after moving to California and being there for nearly 15 years I sold it and just made even while the area I lived in recovered and then some. Still out west but now in Nevada and there are so many former Chicagoans out here it’s crazy. Everybody I talk to out here that moved from Illinois all knows the jig is coming up in Illinois and it ain’t gonna… Read more »

It appears many Illinois (or Chicago) public pensions are around 20-30% funded. Of course Illinois taxes are only going to get worse. This is what I foresee. Imagine the stock market experiences a drop of 10%. Now consider the fact that the politicians have budgeted for a 5% increase (give or take). Suddenly, Illinois pension funding is much lower and finally triggers Moody to rate Illinois as junk. The state subsequently has trouble borrowing. Taxes go up, layoffs begin, more people leave, and the state can’t pay it’s bills (pensions, bond obligations, contractors,…) In a final act of cowardice, politicians… Read more »

6
Bob Out of here
Reply to  DantheMan

The city pensions just recently reported a negative rate of return last year. One of the greatest stock markets ever for the last several years, and they still mange to lose 6%? Unbelievable! If they can’t make money when the market is expanding, God help the taxpayers when there’s a real recession. It’s going to be bad enough in 2023 when the ARC kicks in to the tune of an additional $1 billion.

5
DOUG
Reply to  Bob Out of here

1
DantheMan
Reply to  Bob Out of here

Yes, the corrupt mafia union Democrats will go down the Scorched Earth Process, they will never cut their own pay unless forced to by BK! They don’t give a rip about the remaining 95% of taxpayers. Heck, the majority of the stupid Illinois voters keep voting for same corrupt democrat machine since they repeatedly told right honorable republicans are racist.

Meanwhile, Indiana came in $42M under budget last year and had almost $2B in reserve funds. But try explaining that to your average Illinoisan. Can’t wait until my wife finishes her degree next year and we can move across the border.

But they do have Mayor Pete.

glad I left… somehow I actually got some (barely) appreciation when I lived in Chicago, amazing how home prices have increased in other parts of the country though… definitely increased the urgency

Thanks again for spot-on analysis and clear writing about the problems facing Illinois. Oh, and for making me want to leave as soon as is feasible!

MA is much better run than Illinois. Boston may not be as glitzy as Chicago but I’ll take financial acumen over the glitz. Much lower crime, no car jackings or muggings like in Chicago. Unfortunately, MA is now succumbing to the progressive madness sweeping blue states. We now have our own version of Kim Foxx and one of the squad, Ayanna Pressley. Marty Walsh as mayor is ginning up the racial resentment with talking about inequities. It will end badly at some point in the future. My in-laws used to live in Glencoe. A beautiful village but taxed to the… Read more »

It doesn’t matter who you are, the bank is only going to approve you for so much of a loan. And the more you have to devote to property taxes, the less you have to spend on a house. It also means less discretionary income for home improvements and upgrades, which hurts both retailers and workmen. And given the state of the city and state, who’d want to buy in at this point? I got out just in time, biding my time for city bankruptcy so I can move back after the dust clears.

2
NB-Chicago
Reply to  Bob Out of Here

As a lifelong chicagoan in my 60s ive had to hold off on making 401k contributions for a month to make 2nd installment on $6,900 prop tax on my 1,100 sf bungalow…crazy.

So YOUR retirement was diminished and impaired.

All the more reason to move to Indiana. Cut your property taxes by 75% and save your retirement.

Excellent – more powerful fact based evidence of unthinking destructive policies by our political class. Go Wirepoints – we need you!

The Chicago appreciation is a bit misleading. Chicago’s growth has been anemic in virtually neighborhood other than the hot lake front (and by extension, close to lake front) neighborhoods. Lake View, Lincoln Park, West Loop, Near North, Andersonville, Wicker Park, etc have all seen exponential appreciation in the last decade and a half. Meanwhile, virtually all of the west and south sides outside of the ‘lakefront’ neighborhoods have seen depreciation. Most suburbs too have been flat. But no one seems to care because most of the important people in the Chicago area mostly live in these uppity rich neighborhoods. They… Read more »

Too bad there can’t be a class-action suit brought against Madigan et al by property owners for the loss of value.