By: Mark Glennon and John Klingner 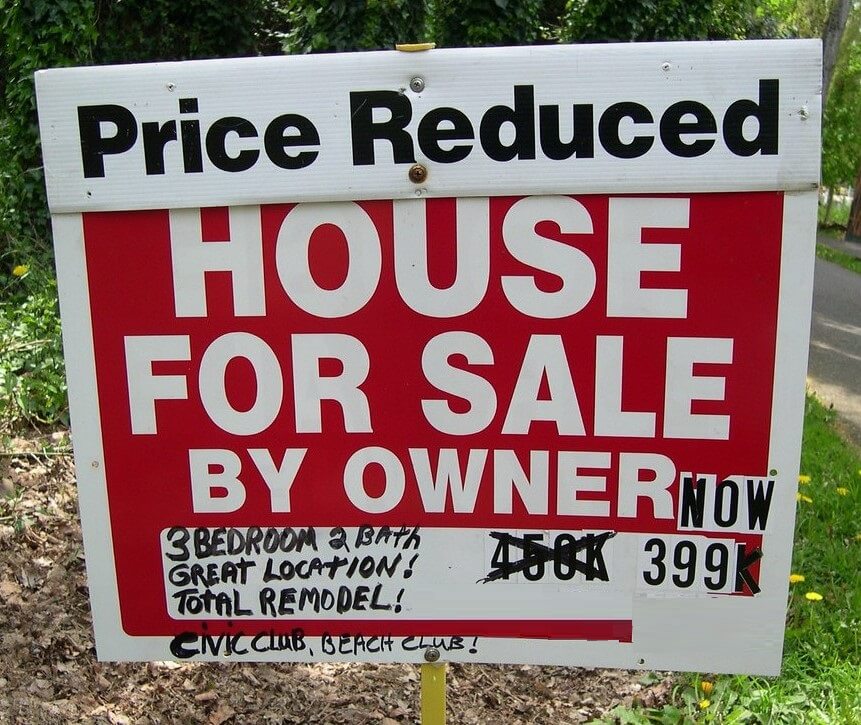 How much wealthier would Illinois homeowners be, in total, if homes here had appreciated at the national average?

With help from the Research Group at Zillow, Wirepoints got the answer:

Illinois homeowners would be a stunning $269 billion wealthier if home appreciation here had just kept pace with the national average over the last ten years.

Here are the details: According to Zillow, the total value of all homes in the United States in May 2009 was $24.2 trillion. That increased to $32.4 trillion in May 2019, which is an increase of 33.9%. Over that same period, Illinois’ total home value increased from $907 billion to $945 billion, just 4.2%. Had Illinois homes appreciated at that national rate, they would be worth $1.21 trillion, which is $269 billion more than actual. Illinois homeowners lost out on over a quarter trillion dollars of appreciation.

The numbers are summarized below. 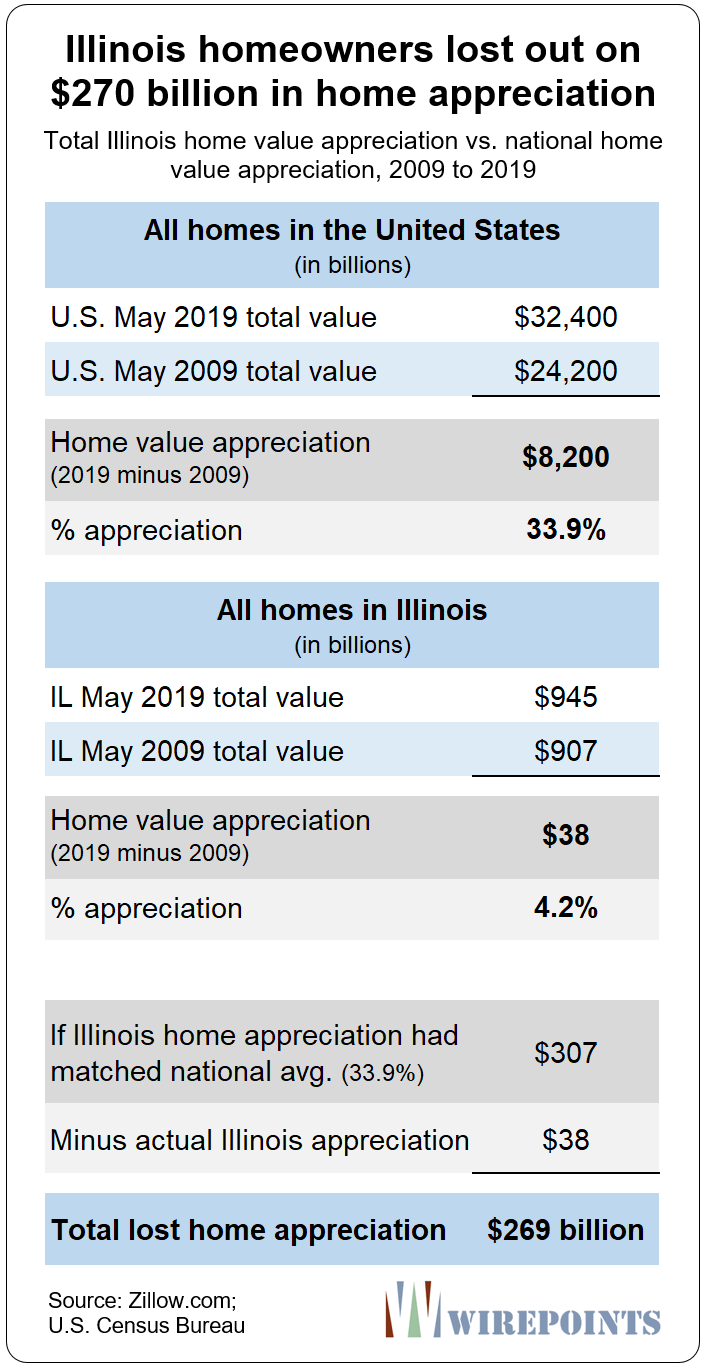 Zillow provided these numbers to us using a constant-stock methodology, meaning they looked at the same homes in each time period. So, none of the gain in total value over those ten years was due simply to more or fewer houses having been built in Illinois compared to the rest of the nation.

The numbers are for single family homes and condominiums; commercial real estate is not included.

That quarter-trillion dollars of missed appreciation is for the past ten years only. However, tens of billions more were probably missed in earlier years beginning around 2004. It was then that Chicago area home values began to diverge from the rest of the nation, according to Standard & Poor’s Case-Shiller index. The same trend probably emerged at the same time in the rest of Illinois.

For many Illinois homeowners, it’s much worse than a matter of limited appreciation. It’s about depreciation that has made their homes worth less than their mortgage balance. According to Attom Data Solutions, 16% of Illinois homes are “seriously underwater,” meaning that the mortgage balance is more than 25% above the estimated home value. Only four states have a higher percentage of seriously underwater homes.

The impact of these numbers go beyond the staggering direct impact on homeowners. First, is what’s called the “wealth effect.” Consumer spending increases as wealth accrues even on unrealized gains in stocks and real estate. Restaurant owners will tell you that business perks up when the stock market is soaring, and the stock market is where the wealth effect is usually discussed. The negative wealth effect works in reverse, too.

Home values have the same effect, and perhaps more quickly. According to research by the Joint Center for Housing Studies Harvard University, housing wealth effects are more immediate. Consumers spend about 5 1/2 cents out of every dollar increase in housing wealth or in stock wealth in the long run. It takes only about one year for spending from housing wealth to reach four-fifths of this long-run effect compared with several years for stock wealth, according to that research. If true, that would mean Illinois’ subpar home appreciation cut consumer spending by about $15 billion in the state over ten years.

Reduced home appreciation also makes the often-discussed retirement crisis more challenging. Home equity is the largest store of savings for most households and, according to the Center for Retirement Research, households entering retirement will increasingly need to tap home equity to maintain their living standards.

The reasons why Illinois home values have underperformed are extensive and some are debatable – matters we’ve written about often on this site. However, property taxes surely top the list. Home values and mortgage qualification are driven primarily by affordability, measured by mortgage payments, insurance and property taxes. High property taxes directly reduce values. They average 2.2% in Illinois, about twice the national average and roughly tied with New Jersey for the highest. Many Illinois communities average over 3% or 4%. Chicago’s south suburbs average over 5%.

Those property taxes have effectively confiscated home equity. They represent a seizure of what is the primary store of wealth for most families, particularly working class families.

For further background on Illinois’ property taxes, see our earlier articles below:

speaking just of cook county, the data and the methodology the assessor (previous or current) uses are deeply flawed. Zillow, Realtor or any real estate website uses these assessments as input into their own models, which also results in dubious results.

Don’t forget about the assessment system itself — the idea that some bureaucrat arbitrarily assigns value to your home is medieval and archaic. If I owned a home, I would not be able to sleep knowing that my assessment can go up 50% at the drop of a hat, just because some pencil pusher says so. They tell us to just appeal our tax bill every year….Gee thanks, what a great solution… The system needs to be completely reformed so people know what their assessments will be at least 10 years in advance and can’t be abused. I don’t know… Read more »

This is especially true here in Rockford and Belvidere. My rental in Rockford was $180K in 2008 now $164K so only depreciation in 11 years yet property tax’s increased now $6,972 was $5744 in 09′. Tax’s are higher than mortgage at these lower interest rates. Belvidere rental was $150K in 2002 now $144K just depreciation only. Many parts of the country saw regular decent yearly increases so how do I move when the spread of my home value(decrease) to increases in other homes is so large? Property tax’s in my Rockford home were 47% of rent last year. Now add… Read more »

IL as a state is slowly hollowing out in most areas. Most medium sized cities in IL are shrinking and slowly decaying. Waukegan, Joliet, Rockford, Carbondale, Decatur, and so on are kind of dumpy. They’re all way worse off than similarly sized cities across the border in WI. Springfield and Madison are light years apart. Rockford is nothing compared to Eau Claire and decatur is the worst compared to Green Bay. The sad fact is that much of the state’s resources are diverted to the blue areas while the red areas suffer.