Illinois residents are fleeing the state in record numbers. The most recent U.S. Census numbers showed Illinois netted a loss of 114,000 residents to other states in 2018. That means Illinois lost 114,000 more residents than it gained from other states.

How does Illinois rank under an apples-to-apples comparison based on population? Illinois is still the nation’s third-biggest loser.

No matter how you cut the numbers, Illinois is an outlier when it comes to losing people.

Illinois lost nine residents per 1,000 in population in 2018, third only to Alaska (-14.6) and New York (-9.2). Hawaii and Rhode Island rounded out the nation’s five-worst losers of residents to outmigration.

In contrast, 22 states netted resident gains from other states. The biggest winner in the nation was Nevada, which added 15 residents for every 1,000 it had in population in 2018. Idaho, Arizona, South Carolina and Colorado rounded out the nation’s best performers. 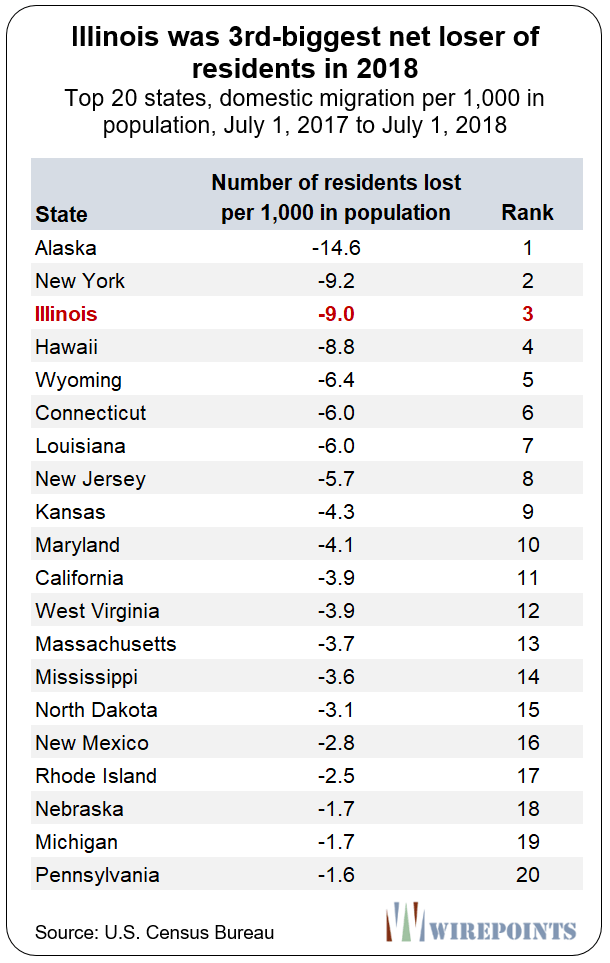 Iowa lost only one person for every 1,000 in population, while Missouri and Wisconsin had even smaller losses. And both Kentucky and Indiana actually squeaked out small net gains. 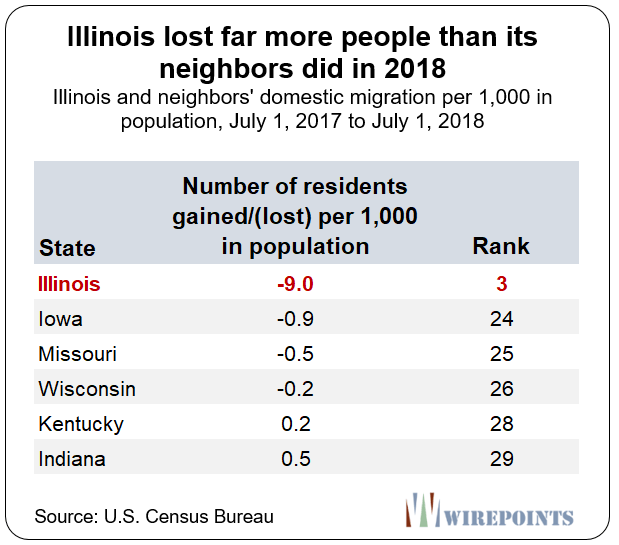 Illinois’ 2018 out migration problem is not a one-off event. The state has consistently lost tens of thousands of people for years.

In total, Illinois has lost a net of 1.5 million people to other states since 2000. 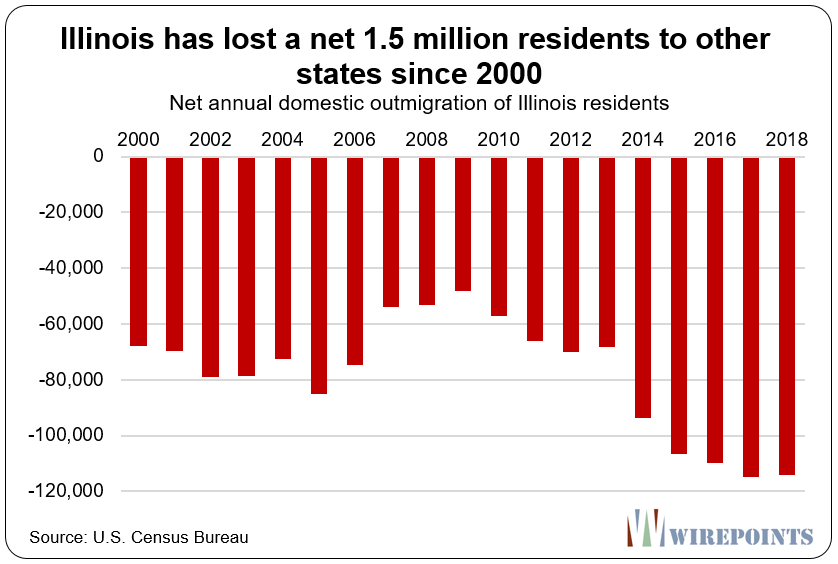 And when compared to other states over time, it becomes obvious that Illinois’ problem is chronic. Illinois has consistently ranked as one of the nation’s biggest losers of residents each year since 2001. Its average rank as a loser of residents over time is nearly 4th in the nation, where 1st is worst.

Meanwhile, Illinois’ neighbors have consistently ranked near the middle of the pack. 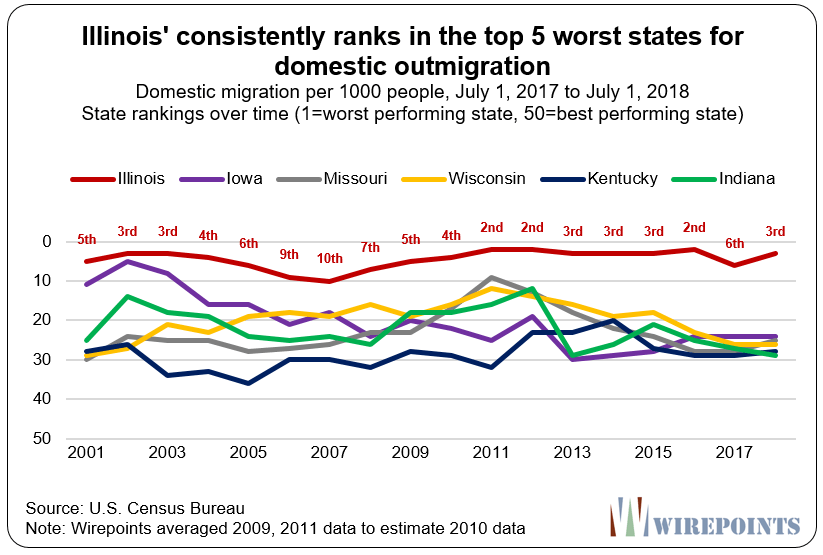 Illinois politicians can continue to ignore the massive mess they’ve created – from the country’s worst pension crisis to the nation’s highest property taxes to the lowest credit rating of any state. But as long as politicians fail to fix things, residents will continue to leave. And with them goes the tax base.

You don’t have to wonder what the wake up call is going to be. If it’s not the exodus of Illinoisans, it’s going to be insolvency. Illinois’ tax base simply won’t support all the debt that’s been built up.

Want to know why everybody’s leaving Illinois? Read the below:

Dont move south. Stay in the “s***hole” you created. We dont want you dragging your politics and values with you here. Just stay the hell away.

Lets do some math and also assume that the 100,000 number is 25,000 families and homes. If an average home is valued at $200,000, the Illinois real estate tax would be around $8,000. That’s 200 million less collected in real estate taxes when the 100,000 people left Illinois. Now think about all the other taxes (income tax, sales tax, ….) and fees that those 25,000 families paid. Add it all up and then divide by the number of families remaining in Illinois. That’s the additional amount in taxes they will now have to pay. Now repeat this scenario every year… Read more »

I wonder if I could make a few bucks printing up I hate Illinois bumper stickers?

0
Being Had
Reply to  Mike Williams

Whoever owned a home probably sold the home. So, the State still collects the property tax. I don’t know what the new home growth is, but in theory the demand for new homes would be down. The consumption taxes and the income tax collections would indeed go down.

Mike and Ted I would like to add that I do not think that property taxes are lost in your scenario especially in the 39 PTELL counties in Illinois (They may be in non ptell counties). Most of ptell are in the more heavily populated areas and not many in rural counties. In Ptell they can collect taxes on what was levied on total EAV not billed or collected plus 5% or 1/2 of inflation whichever is less and they adjust the tax rate accordingly to compensate. So in effect if you or I are the last property owners in… Read more »

January 24, 2021
Board members of Township District 113, made up of two high schools serving more than 3,500 students, have shown no signs of wanting to open up even as nearby districts increasingly add in-person learning options. Not surprisingly, that has many parents in the north shore suburbs of Deerfield and Highland Park more than frustrated.
View Comments (3) | Add Comment