Folks who still have those Black Lives Matter signs in their yards may want to reconsider in light of what matters to Blacks.

Black Lives Matter Chicago openly supports not just defunding the police but abolishing it entirely, along with prisons and the entire Illinois Department of Corrections.

But a new poll commissioned by Wirepoints found that Black Chicagoans want what all Chicagoans want – more policing in their neighborhoods. They just want the problems fixed.

Wirepoints wanted to know what Chicagoans of all races think about that and a range of other issues so we commissioned a major survey by a polling organization known for balance and objectivity – RealClear Opinion Research. 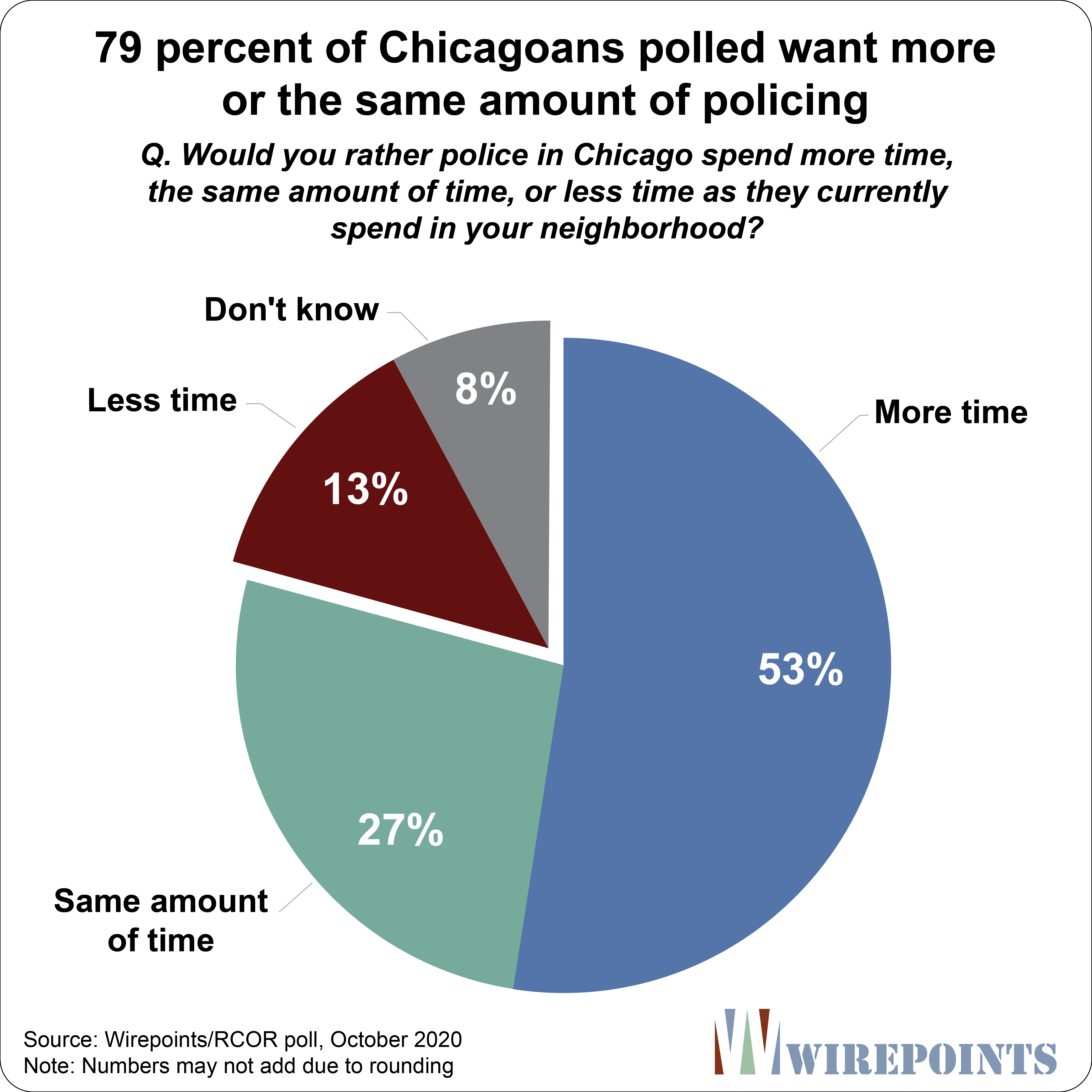 Attitudes do vary by race, however, when it comes to how well the Chicago police are doing, which we detailed in our full report on the poll released Thursday.

What about Black Lives Matter, specifically?

Even though Chicagoans want more police, and even though the majority of every race in Chicago oppose defunding the police, Chicagoans nevertheless say they support BLM, which wants abolishment and defunding.  More than three-quarters of surveyed Chicagoans reported they strongly support or somewhat support BLM. Black Chicagoans maintained the highest support for BLM (86%).

The poll doesn’t tell us but the answer no doubt lies in the difference between support for the BLM movement and the BLM organization. “Black Lives Matter” is seen by many as just a generic call for racial equality and police reform that’s different from the organization.

And there’s simple ignorance about what the organization wants. Those using the BLM mantra may not know or care what the organization stands for, but they should. As we’ve written before, the BLM organization calls for a range of things beyond abolishing the police that range from extreme to nutty, including Marxism and giving large chunks of Chicago to Native Americans — decolonizing “Zhigaagoong,” which is their word for Chicago. BLM Chicago’s founder has defended looting, calling it a “slave revolt.”

More details on the Wirepoints/RealClear Opinion Research poll are here:

Antifa and BLM are sometimes involved in the same protests.

“Defund the Police” is currently one of the “10 Demands” of Black Lives Matter Chicago.

“We demand immediate disinvestment in CPD and a reallocation of the operating funds currently allocated toward policing, which represent 40% of the City’s operating budget and result in $4 million a day spent on policing.”

Nothing more than a criminal enterprise looking for free money!

BLM is a violent, anti-American, HATE GROUP. The virtue-preening nitwits on the NorthShore haven’t a clue. We’ll need to be embarrassed for them. I saw one sign that proudly stated: I’M RIDIN’ WITH BIDEN! OMG! I hope Mr. Senility is not Drivin’.

Don’t look for policing to improve in Chicago any time soon. There are way too much politics from the Mayors and Aldermen’s offices influencing police operations in the city.

Lori and the progressive caucus headed by Sophia King wants to defund the police, ie reallocate resources. They both need to go as their only allegiance is to the criminals who will vote for them.

BLM the organization has hijacked the black race and black people don’t even realize it! Sad!

I realize(d) it and don’t support it. It’s another meaningless catchy slogan that really accomplishes nothing. ☹️

It is instructive to see what the Fabian’s did in Great Britain. Formed just before the turn of the century, it took them until 1945 to take over government. Then, they nationalized industries. Socialism took hold and it wasn’t until Maggie Thatcher that the chains were broken. In the US it will be different because industries won’t be nationalized. They will be regulated into socialism. As Churchill said, “civil servants not serving or being civil”.

Today, the socialist left is laying it all out on the table. The elites are their unwitting accomplices. They see this as their time. Unwitting college degreed elites who hate the crassness of Trump and find him distasteful will throw their lot with Biden, who is indeed a Trojan Horse. What they don’t understand is you cannot ride the white tiger of socialism to power and then expect to control it. That tiger will consume them because it has a bottomless appetite.

When a solution is to *wreck it* & start over…

You know it comes from a childish & immature thought process…

Sadly a population of misinformed people fuel this.

BLM
The cop that killed Breana Taylor is suing.
With any luck he will get disability at a young age.
That way he will not have to pay Federal or State Income taxes.
Support Police with your wallet.
“Shut up and pay your taxes”.
Expect a huge tax increase soon to support the Police.

BLM, is here to stay.
Stop racism is the rally call.

blm is a domestic terrorist Marxist organization that calls for the killing of police and justifies looting. They are nothing about ending racism. They are racists who do not say a word black on black killing

I am grateful the BLM Org is taking it’s peaceful protests to the neighborhoods with yard signs.

You know what people want the most? Sanity.

Man, is that true.

Yes! The scary thing though is that there are too many crazies who don’t even know what sanity is. They are not tethered to reality, only to their agendas.

November 19, 2020
Mamie Cosey and her family are victims of a growing malaise impacting cities across Illinois, where residents are taxed out, services are being slashed, police and firefighters are losing their jobs, and public pensioners are losing their retirement security. A recent law that garnishes city tax revenues to pay for pensions is making things worse.
View Comments (22) | Add Comment

ABOUT US
© Wirepoints Corp. 2012 - 2020. All rights reserved.
Contact us: admin@wirepoints.org
FOLLOW US
wpDiscuz
21
0
Would love your thoughts, please comment.x
()
x
| Reply