A 1994 Daily Chronicle piece from Dekalb/Sycamore, Illinois, puts some light on the pension “reform” that helped unleash Illinois’ current pension crisis. That’s back when Gov. Jim Edgar was championing what today is known as the Edgar “ramp,” a 50-year pension repayment schedule for Illinois’ then-ailing pensions. The unfunded liability had risen to $15 billion in 1994.

“We had a time bomb in our retirement system that was going to go off in the first part of the 21st century,” Edgar told The State Journal Register in 1994. “This legislation defuses that time bomb.”

In reality, his plan only made the bomb bigger. Illinois now has the nation’s worst-pension crisis, in large part because of Edgar’s poor decisions – and his lauded “compromises” made with House Speaker Mike Madigan.

Edgar matters 25 years later because he’s now on Gov.-elect J.B. Pritzker’s transition team. He’s expected to provide bipartisan cover and expert advice as Pritzker decides whether to embark on a number of “-ations” – reamortization, securitization and taxation – to “fix” the pension crisis. 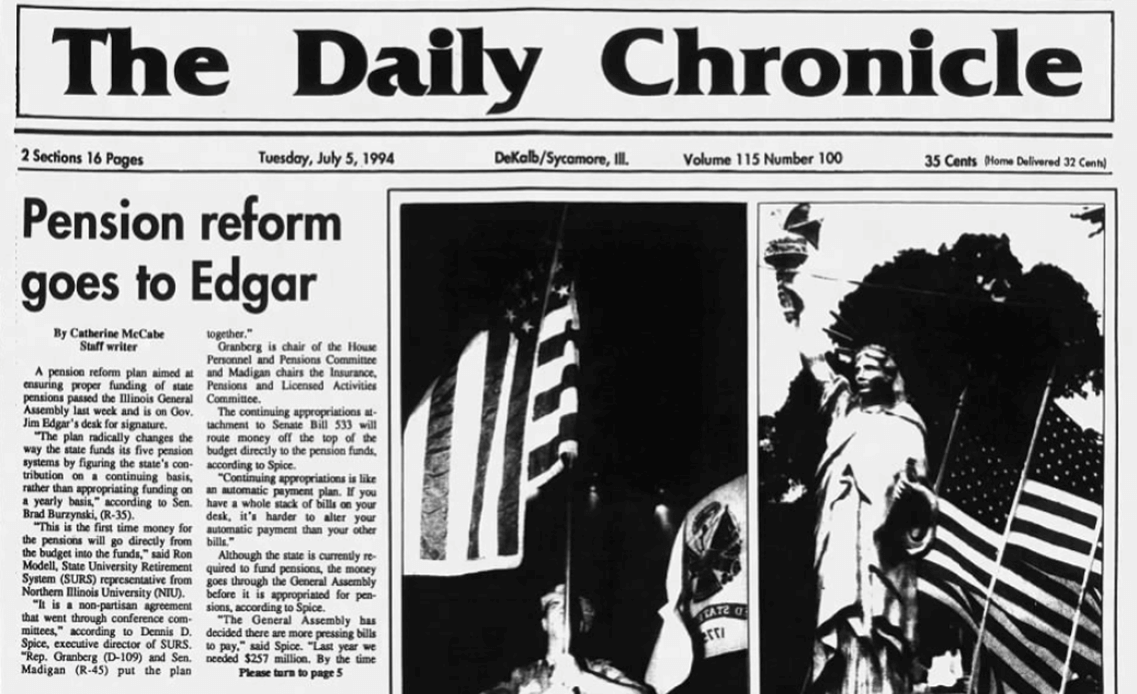 Here are some highlights from the 1994 piece:

Today the official liabilities are $134 billion – a topic we just covered in this recent report: Illinois official pension shortfall worsens to 134 billion despite strong markets and increased contribution 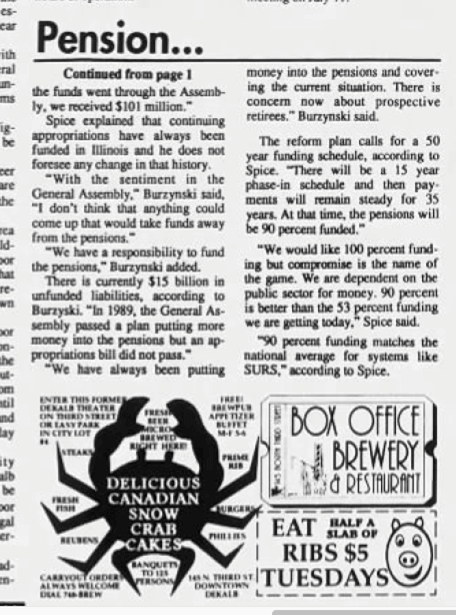 2. The amount of funding “needed” for funding pensions back then: $600 million.*

This year, the state – meaning taxpayers – will put in $8.5 billion. That doesn’t include another $1.6 billion to pay down some of the nearly $20 billion in pension obligation bonds issued by former-Govs. Rod Blagojevich and Pat Quinn.

3. The Edgar Ramp was a 50-year funding schedule that was expected to get Illinois to 90 percent funding by 2045.

Needless to say, the plan was a disaster.

But the bigger driver behind Illinois’ crisis has been the growth in pension benefits (read Overpromised, not underfunded). Edgar was complicit there, too.

Edgar promised state workers a lot more than his predecessors, something he bragged about: “[I] approved the most significant increase in pension benefits for state workers in a quarter century… A concerted effort was made to improve state employee benefits and make a career in government service more attractive.”

Edgar’s plan made a mess of Illinois pensions, but the worst aspect of his “compromises” was how they showed future governors how to kick the can. Blagojevich chose $10 billion in Pension Obligation Bonds (POBs). Quinn copied Blago with more than $7 billion in POBs and added a $32 billion, four-year “temporary” tax hike on top of that. Even Rauner ended up utilizing the recent $5 billion tax hike instead of fighting it tooth and nail like he said he would.

Perhaps the most telling line in the 1994 piece is “We would like 100 percent funding, but compromise is the name of the game.”

Read more about the origins of Illinois’ pension crisis:

*A previous version of this article reported the state’s payment as $257 million. That was the required payment for SURS alone.

Asking the fox why all the chickens are gone…

Dennis Spice, the executive director of SURS mentioned in the article, is 12 years into retirement and has a $78,000 pension for 17 years of dubious service. Lots of good nuggets: https://www.chicagobusiness.com/article/19960824/ISSUE01/10006681/pension-redemption-savior-ends-scandal-era-at-state-fund “Dennis Spice, who was forced to resign last year after giving state legislators conflicting stories about lavish perquisites for himself and his top aides…claiming at one point that the taxpayer-supported pension fund wasn’t a state agency.” “Mr. Spice’s spending sparked a political furor, especially because SURS was posting dismal investment returns at the time…Auditors uncovered country club memberships, a $7,000 annual car allowance plus mileage reimbursements and $4,000… Read more »