A Centers for Disease Control report on the drop in births nationally has experts worried about its impact on the country’s fiscal and economic situation. Fewer young people could mean a shrinking population and a workforce too small to support the country’s ever-growing number of retirees.

If that’s a problem nationally, then it’s a full-on crisis in Illinois. According to separate U.S. Census data analyzed recently by Wirepoints, Illinois’ birth rate has fallen faster than the national average since the turn of the century. And that’s a real issue given the state’s massive pension debts and its declining population.

Barring structural pension reforms, Illinois will be trapped in a downward spiral where growing government debts fall on fewer and fewer people.

According to the CDC, the number of U.S. births nationally declined to a 32-year low in 2018. The reasons for that were varied; teens and hispanic women are having less children while the increase for older women (ages 40-44) has slowed, among other factors. Births in the U.S. have fallen in 10 of the last 11 years.

State-level data from the U.S. Census Bureau confirms that negative birth trend and shows just how worse off Illinois is compared to other states.

It also captures an additional factor on state births the national average doesn’t: the potential effects of domestic migration. As more millennials move out of Illinois, there’s likely to be a negative impact on births. Illinois lost a net of 107,000 millennials and their dependents to other states between 2012 and 2016, according to data from the Internal Revenue Service. And a Brookings Institution report found Illinois and West Virginia were the only two states in the nation to lose millennials between 2010 and 2015. 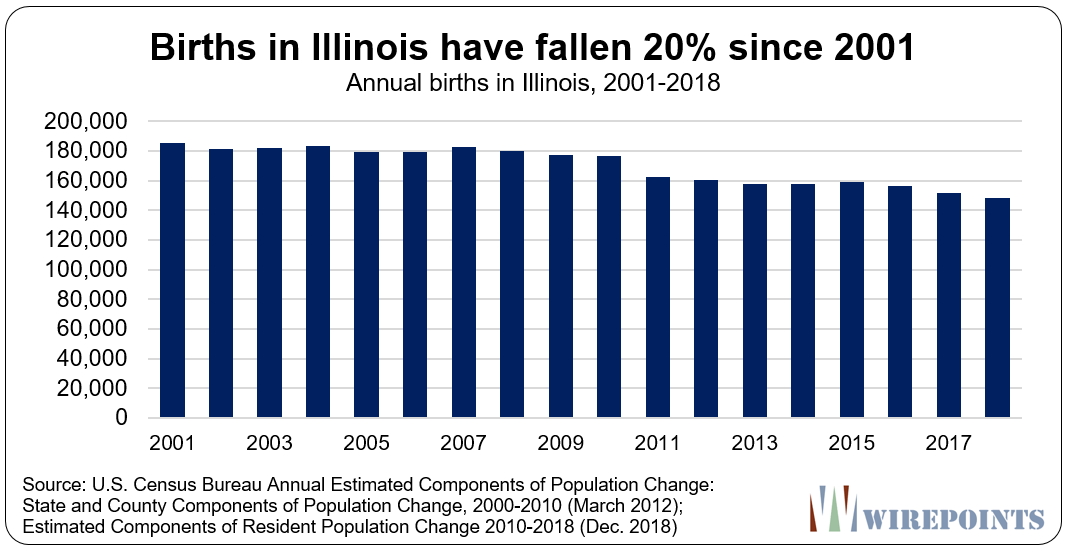 In contrast, most of Illinois neighboring states improved their birth rankings over the 2001-2018 period.

Illinois’ drop in births, combined with a 50 percent drop in international immigration and record domestic outmigration, has resulted in a shrinking Illinois population five years in a row.

Which brings us back to the concerns of too few young people to pay for the state’s burgeoning debts.

Illinois has racked up more than $420 billion in public sector retirement debts at the state and local levels, based on Moody’s more conservative assumptions for pensions.

Divvy those debts up based on households inside and outside of Chicago, and the numbers are impossible.

Households outside of Chicago are each on the hook for $75,000 for their share of state, Cook County and municipal retirement debts.

Chicagoans have it even worse. Each Windy City household is on the hook for nearly $145,000 for their share of Chicago, Chicago Public Schools, Cook County and state debts. 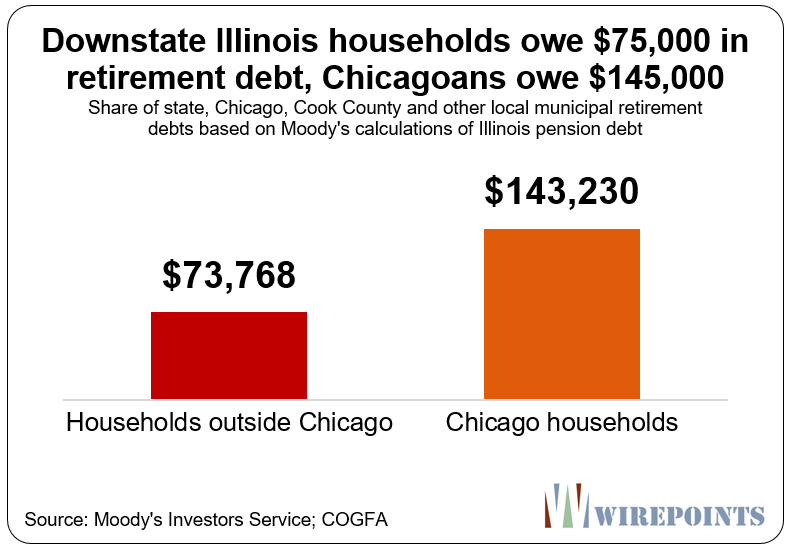 Those are truly startling numbers, and they’re only going to get worse as more Illinoisans leave.

And if lawmakers want to make the repayment of those debts “progressive,” the numbers get even scarier.

Yeah ponzi schemes tend not to work too well without a continuous and fresh supply of ponzis! A retirment income tax would add a huge number of fresh ponzis to keep the ruse going, but older people have a better ponzi detection mechanism in them and would just all leave. Millennials are kind of stupid and tend to be socialists, it is therefore correct to think they will be the best frogs to boil slowly. Let them pay for government largesse in Illinois, the state has handed them and their descendency the bill already. Shhhhhh we don’t want them to… Read more »

Perhaps, the murdering of babies called “abortion” shouldn’t be allowed. Just a thought.

Upper middle class families seem to be having tons of babies, quite a few around here have three or more kids. In my suburban area (I prefer not to say which suburb), which generally – but not always – trends conservative, the schools are actually overcrowded because so many upper middle class families are having two, three, four or more kids. Somebody down the block has six, and I know of another professional family that has five. I don’t have quite that many but I’ve hit replacement level. In contrast though I did read a story that the north shore… Read more »

And this is why making policy decisions based on the expectation of infinite growth is irresponsible. When the punch bowl runs dry, bad things happen.

And a further reason why “contract rights” were never intended to provide the types of forever sinecures that courts have read into the constitutional language. It has long been the case that a legislature in year one can’t tie the hands of a subsequent legislature to undo the mistakes MADE in year one. That has never meant that a state doesn’t have to repay its debts for borrowed money but it was grievous error to equate a pension promise with simple deferred compensation. Give the employees their own money back (with interest) but don’t seek to keep a careless unfunded… Read more »