The Sun-Times Editorial Board has recommended several reform ideas Chicago Mayor Lori Lightfoot should pursue to reduce the sting of future tax hikes on Chicagoans. Cut workers’ comp costs. Get rid of “aldermanic menu money.” Eliminate unnecessary offices, etc. Every one of the Board’s eight recommendations (see Appendix) are good and each should be pursued to their fullest extent.

The problem is, even if every recommendation is implemented, the city will optimistically save only about $100 million annually. The city’s official budget alone is short by as much as $1 billion, and that budget ignores the true costs of the city’s pensions. The real deficit is much larger and the debts the city faces are already insurmountable.

Unfortunately, the Sun-Times ignores the elephant in the room – structural pension reform. There’s no fixing Chicago’s problems until pension costs are addressed. And that requires changing the state constitution’s pension protection clause.

If the Sun-Times really meant what it said – that it wants to avoid “…slamming Chicagoans with higher taxes” – it would immediately call for Illinois politicians to put a pension protection clause  amendment on the ballot.

The same goes for Mayor Lightfoot. She recently said she wants to find cuts in the budget, but that tax hikes were unavoidable: “There’s no question we’re going to have to come to the taxpayers and ask for additional revenue [tax hikes]’. Absent from her is any talk of a constitutional amendment, something her predecessor Rahm Emanuel embraced just before leaving office.

If Lightfoot needs any convincing of the need for an amendment, she may want to look at how pensions have swallowed the budget in the last decade.

Total city expenditures were up 7 percent, or $506 million, from 2008 to 2017. How much of that was pensions? Effectively all of it. Pension spending was up $515 million, or 125 percent, over that same time period. Pension costs ate up all the new spending.

To make room for them, Chicago cut funding to services including Culture and Recreation (down 12 percent), Streets and Sanitation (down 37 percent), Health (down 33 percent), and outlays for Capital Projects (down 58 percent). 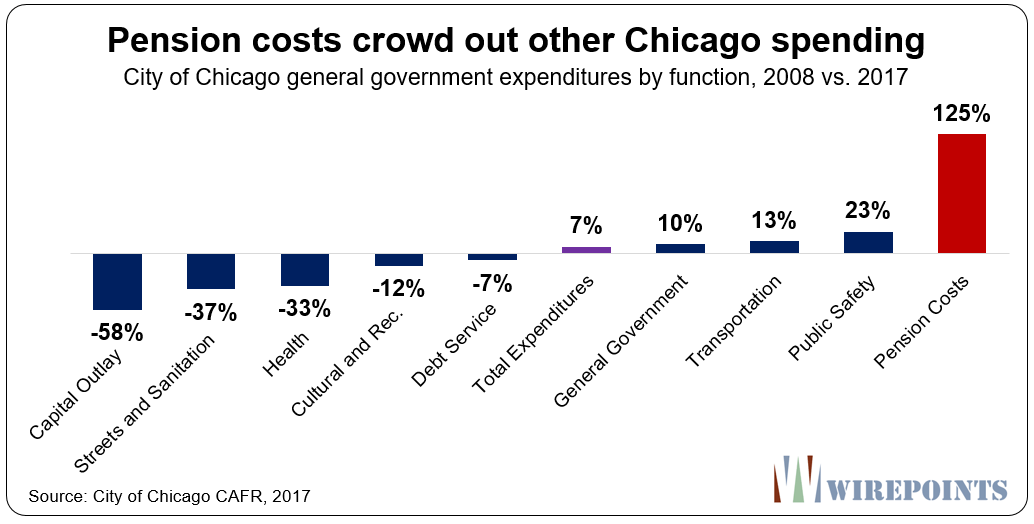 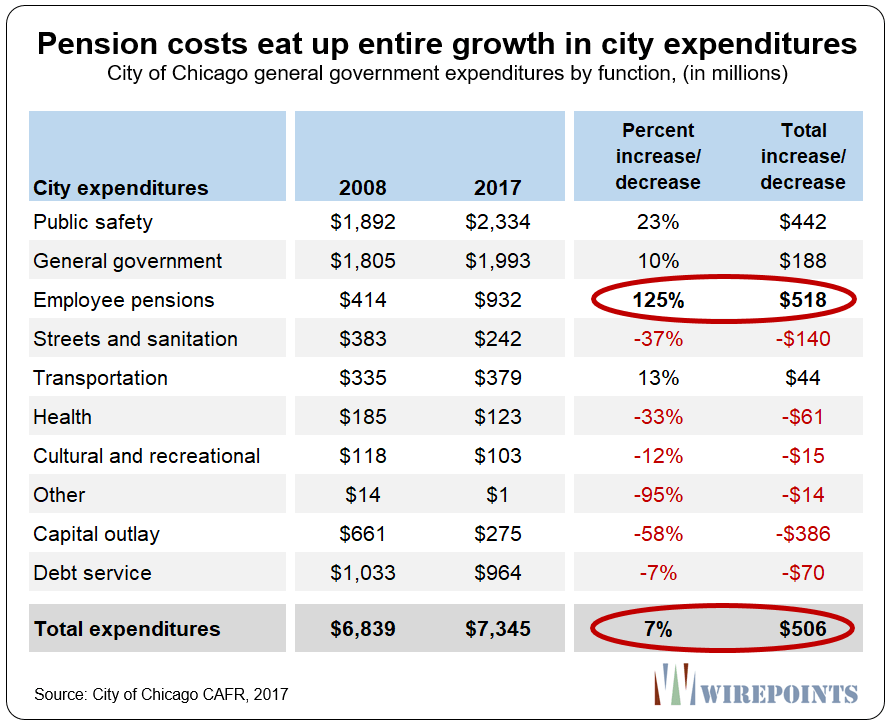 The pressure on every budget line item will only continue as pension costs are expected to rise, even under the best of conditions. By 2023, city pension costs will be over $2.2 billion, compared to the $900 million of 2017.

And when a recession comes along, as it inevitably will, the pension funds could experience a decline in assets, putting even more pressure on taxpayers to fill the pension shortfalls.

Chicago’s municipal, fire and police funds, all at less than 30 percent funded, are already dangerously close to insolvency. They may not be able to handle another serious stock market correction. And that’s bad news for the city workers and retirees who are counting on getting retirement checks in the future. 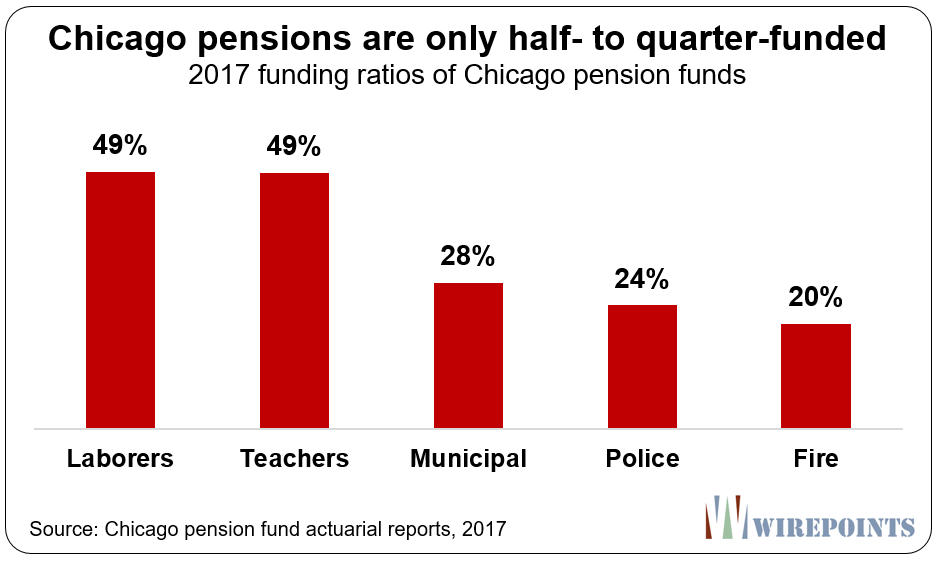 As we’ve covered in other reports, pensions are not just a city budget issue, either. Chicago households are on the hook for what we call impossible government-worker related debts. Based on the official pension and retiree health care shortfalls reported by the state and local governments, each Chicago household can expect to be burdened with nearly $90,000 in state and local government worker retirement debts over the next couple of decades. That includes the debts of the city, the Chicago Public Schools, Chicago’s share of Cook County government pension debts, as well as those of the state.

If we use Moody’s more conservative pension calculations to arrive at that household burden, those debts jump to nearly $145,000. 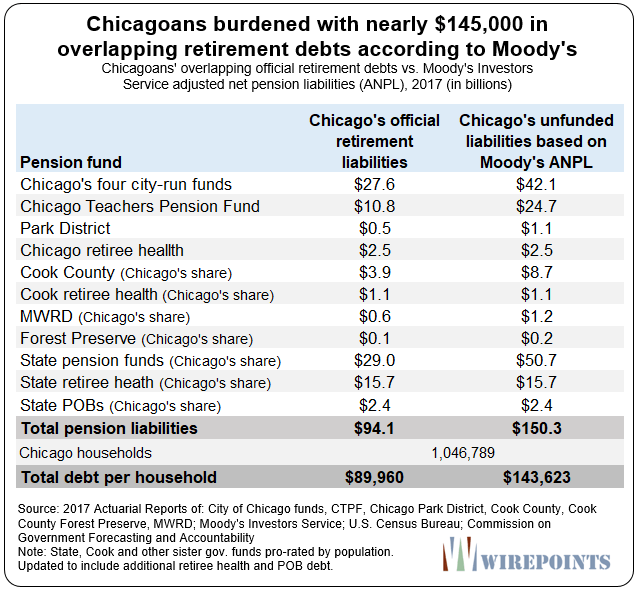 Burdens that big mean more and more Chicagoans will choose to leave the city rather than stick around to pay that debt. And anybody contemplating moving to Chicago will be deterred. Why should anyone move to Chicago and be stuck with a $145,000 bill for services that have already been rendered?

The Sun-Times’ reforms are all well and good, but Chicagoans won’t feel better if the mayor’s tax hikes are just a bit smaller. The city’s residents have already been hit with a record property tax increase and new city fees in recent years. And the state’s latest budget and capital bills – laden with more taxes and fees and a doubling of the gas tax – will only make their tax burdens worse.

Lightfoot can’t tax her way out of Chicago’s financial crisis. Until she embraces pension reform, and papers like the Sun-Times join in, the city’s financial struggles will only get worse.

Under a scenario where the city manages to slash the cost of police lawsuits, workers’ comp and the aldermanic spending menu by an optimistic 30 percent, savings from the below reforms would likely total about $100 million annually.

Eliminate city clerk and treasurer’s office. Eliminating both offices would save a maximum of about $4 million a year. That’s the combined expenditures of both departments in 2017.

Management of pension fund investments. A 2015 article by Pensions and Investments reported that “by negotiating with managers to secure aggregated pricing, the $144 million paid to investment managers across all 11 pension funds (city and county) annually could be reduced by $25 million to $50 million”

On-line portal for permits. An online portal for city permits would likely save a small amount on administrative costs – the larger savings would accrue to businesses.

Consolidate city and county election services. In 2011, the Joint Committee on County-City Collaboration estimated a Cook County merger would save $5 million to $10 million a year.

Collective bargaining agreements. The Sun-Times says Lightfoot should “hold tough” when negotiating new labor contracts, but it only recommends “holding down” raises instead of freezing and reducing overall compensation to a level Chicagoans can afford. A slowdown in raises won’t save money – it will only slow down the growth in spending.

This is like “The Invasion of the Body Snatchers” or “The Stepford Wives” when Katherine Ross discovers that her friend Paula Prentiss has become a perfect wife robot. Lightfoot at first seemed like a sensible mayor but — gasp — she’s just another can-kicker and pension debt denier !! Or “Colossus the Forbin Project” when at the end of the movie the world will continue to be under the rule of the giant computer and Dr. Forbin says ” Never !! “.

Crazy idea, BUT could the city do a “special assessment” for pension obligations amortized over (say) 50 years and spread ratably over the properties that are subject to property tax? This is likely to bring real estate transactions to a screeching halt but that might hasten a bankruptcy. This notion is based on my observations that no lawmaker acts on anything before there is a crisis. This might get attention that a teachers’ strike wouldn’t. Further, I think there are some whacko judges in Chicago and Springfield who would probably authorize this. Pensioners might begin to see the hopelessness of… Read more »

By ignoring pension and health care benefits reform, the Sun-Times reporting is so very wimpy.

Bingo. They are hardly alone. But it was so pleasing to see Carol Marin on WTTW last night ask the question right — about the budgets not including those things.

Lightfoot is a lightweight. Not a reformer at all, she is a follower, a go along, she will go along with the notion that all of this is a revenue problem and not a cost problem. She scares nobody, which is what it really takes, the fear entrenched budgets will be cut. Her bubble will be the same bubble as always, it won’t pop. Same old same old. A lot of people said she was different, but she is no different than Burke or any other machine cog. Eventually she will do what they all are doing… Schedule a meeting… Read more »

Moody’s and others like them get paid by issuers – including the state of Illinois and the City of Chicago. They have an embedded organizational conflict of interest. I don’t think the first shoe to drop will be in the form of legislative action. It will be like New York in the 70’s – no one will lend the state or the city money. We might see anarchy then, because the lenders have slapped liens on anything they can. Milken in the 80’s valued companies by their available debt capacity – a bad idea, we now know. The city and… Read more »

How about reducing the number of wards?

IMHO she is not a real big city mayor who can evaluate, plan, and solve the serious problems. She is playing the role of a social worker. Chicago already has tens of thousands of social workers, none of whom can save Chicago. Her popularity is her only qualification at this time. Thank you, have a nice summer.

Ted, John– great writing. Just like the state, has city released 2018 cafr? One can only wonder what secret fiscal disasters st coalition of labor owners may know about that rahm hide from voters and that lightfoot says shes still assessing. Maybe the st editorial is an attempt appear compassionate before the s hits the fan.