Illinois will never get back to any sense of normalcy as long as the media and Gov. J.B. Pritzker continue to push cases as the key measure of the virus’ danger to the general public. As we wrote last month, it’s not cases that matter, but hospitalizations and deaths.

That’s important because there’s been no real increase in hospitalizations or deaths for three whole months. Cases have tripled since their lows on June 18, yet the average daily death rate has actually fallen from 50 then, to about 19 today.

We’ve heard no explanation from Pritzker and others on why hospitalizations and deaths haven’t increased. Instead, they continue to treat case growth and positivity rates as what really matters.

What gives? Why won’t Gov. Pritzker share the facts with Illinois residents and businesses still affected by his continued partial lockdown? 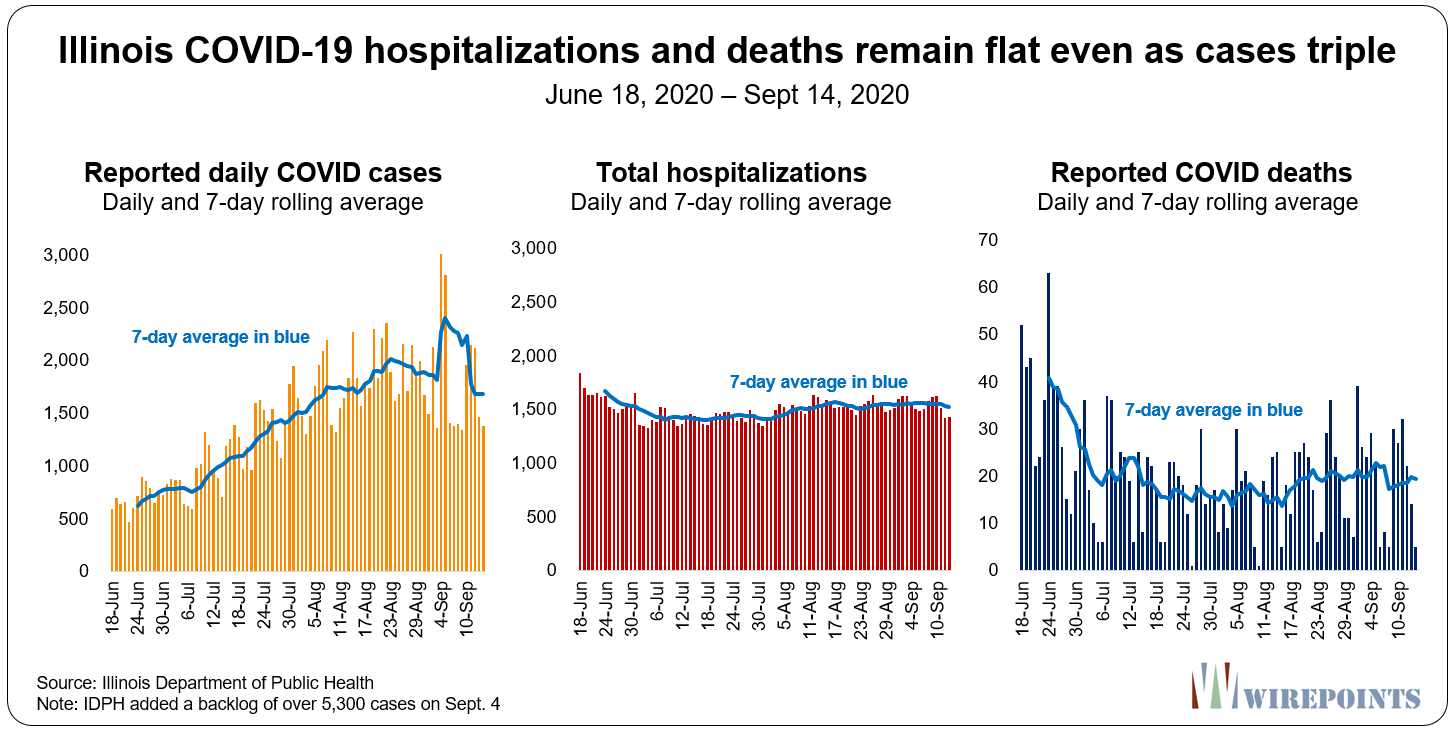 We can’t answer any of the above questions because Gov. Pritzker and the Illinois Department of Public Health won’t provide such data. And it’s not like they can’t. Other states do.

Take Florida, for example. Gov. Ron DeSantis’ team provides daily case information by age and the average age of all cases, by day and by county. It also provides current hospitalizations by age bracket. The links to Florida’s detailed daily data and person by person data are here and here.

Cases up, hospitalizations and deaths flat

Let’s look at the data we do have to make the case that Gov. Pritzker needs to be much more transparent with Illinoisans.

Below is the graphic of daily cases in Illinois since the pandemic began. You can see beginning on June 18th that cases based on a 7-day moving average reached a low of 596. Since then, cases have tripled. Those increases were followed by weeks of official warnings that Illinois was “headed in the wrong direction” and by threats of new shutdowns for parts of the economy.

Rising case levels were also the reason given by school districts for not reopening in person earlier this month.

But what’s being ignored is that hospitalizations and deaths failed to rise in tandem with the increased daily case count.

The 7-day average of daily deaths also fell, then remained steady over the past three months. Illinois was suffering an average of 50 deaths a day on June 18th, the date cases began their rise. Today, average daily deaths are around 19. 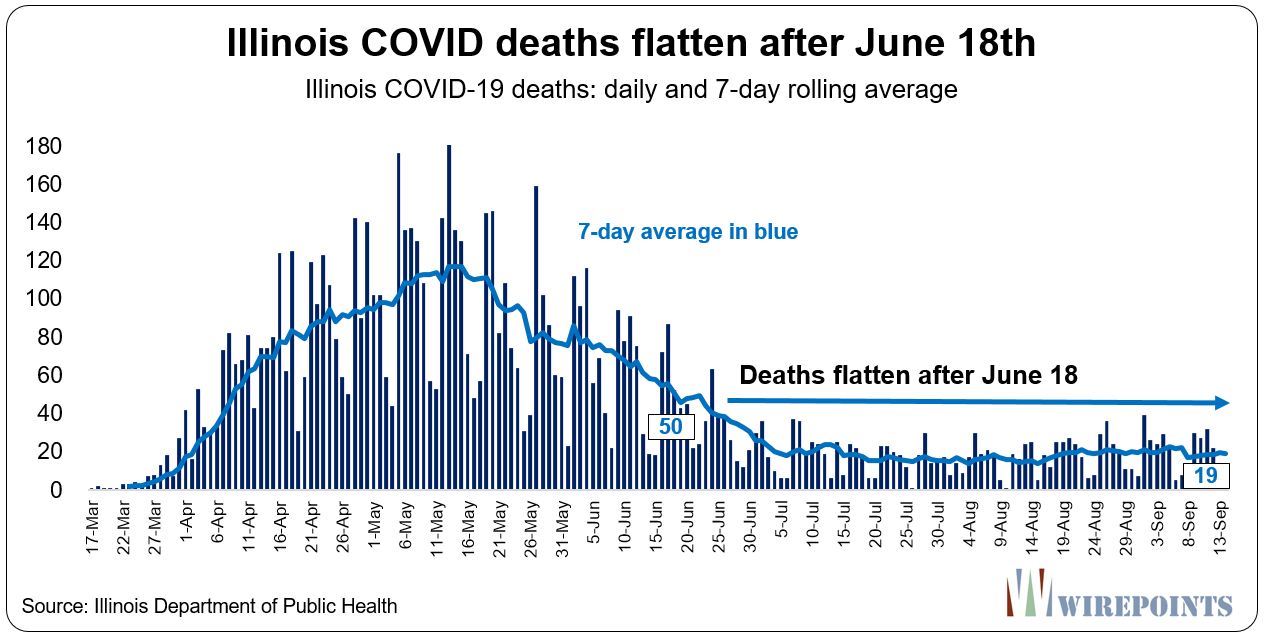 Every death is tragic. But considering the significant spike in cases, for now the correlation between cases and hospitalizations/deaths is broken. Illinois has flattened the hospitalization and death curves, and that’s great news.

We don’t know what path the virus will take going forward and we should be vigilant if hospitalizations and deaths begin to rise again. Illinoisans would have to adjust as necessary. But it’s been six months since this pandemic began. The public deserves to begin making their own decisions on what level of risk they can accept. To do that, Illinoisans need the facts.

Gov. Pritzker and his team should be releasing all the data behind the “science” of COVID. With the disease not going away, it’s his job to give Illinoisans the information they require.

Illinoisans shouldn’t be kept in the dark.

Read more about the impact of COVID-19 on Illinois:

The PCR is considered the “Gold Standard” test in detecting the presence of the SARS-CoV-2 virus- yet “the reliability of Covid19 tests is uncertain due to the limited evidence base.” https://www.tga.gov.au/covid-19-testing-australia-information-health-professionals

The assumption that the test resulst are 100% accurate (which they are not) should be challenged before using the data for policy. Even if a test has 90% positive predictive value, for every 100,000 tests given, 10,000 will be falsely reported as positive for Covid. The larger the number of tests, the larger the number of false positives. ie. 1 million tests = 100,000 false positive cases even if there is no Covid present in the tested population.

Its all a scam to ruin thee economy.

What’s going on with Will Co.?

Will lord pritzker allows us to eat inside again…?

Everyone thinks Biden will win (and he may) at that point the government will allow all businesses to open to support the Biden election. If Trump wins look for more of the status quo.

And looting and rioting to continue. (status quo)

Who thinks Biden will win? Who is everyone? Between the recent MAGA Rally’s, the Boat Parades and Car parades and people waking up to this fraudulent COVID reporting by the Democrats, the Democrats are the minority.

There is no science. It just depends upon how much Pritzker’s maker went on a certain day. Was it going to go up or down. He likes playing puppet master and thinking he has a brain. Look at all the people leaving this idiotic state.

Pritzker is lying through his teeth & he’s one BIG fraud–how anyone could endorse rules for radicals is a criminal!

We’re in a casedemic here’s a good video on whats going on, he gets to the US data about halfway through https://www.youtube.com/watch?v=8UvFhIFzaac basically explains everything, its long but well worth the watch

Why are healthy people, without any symptoms being tested…?

The PRC tests are way to sensitive & trigger a positive result to “virus debris” that is incapable of replicating, which makes them a danger to no one…

The number of deaths are also being vastly over reported…

I’d venture all of them (tragically) are elderly, or people who have co-morbidities..

Our governor loves playing king too much…

People will do anything sometimes for “free” and I guess that includes some people going to get this test and becoming part of Pritzker’s statistics.
There are a number of false positives too–so why do it.??

Throw on top that the death rates aren’t real. They’re an indication of how many people died with china virus (assuming the tests are accurate), not from china virus. Until they can transparently identify those figures, death rates are not meaningful.

When you reward the health care system for illness via cash transfers from taxpayers, it’s funny how you get more illness.

Authoritarian hoax. Yes, it is possible for the virus and the hoax to be real concurrently.

Last edited 4 months ago by chumpchange
19