Few Illinois governments seem to understand – or care – about the implications of the state’s shrinking population.

That’s the only conclusion that can be drawn from all the property tax hikes being passed across the state.

Illinois has shrunk for four years in a row, according to the latest Census results, and much of the blame can be placed on the state’s highest-in-the-nation property taxes.

And yet the only “solution” that local governments have, from the City of Danville to the Wilmette School District 39 to Kankakee County, is to hit their remaining residents with even larger burdens.

However, there are a few governments willing to go in the opposite direction and actually find ways to make things more affordable for their residents.

Lakewood Village in McHenry County, led by Mayor Paul Serwatka, is one of them. The village’s leaders recently found the resolve to cut Lakewood’s levy by 10 percent. The board voted unanimously to reduce the municipality’s property tax levy.

Lakewood is giving its residents a break from some of the state’s, and the nation’s, highest property taxes.

The village is located in McHenry County, near ground zero of the highest-taxing areas in Illinois. McHenry County residents pay 7.8 percent of their incomes toward property taxes – the state’s 2nd-highest burden. A short way east in Lake County, it’s 9.4 percent. And in Kane, property taxes consume 7.6 percent of household incomes. 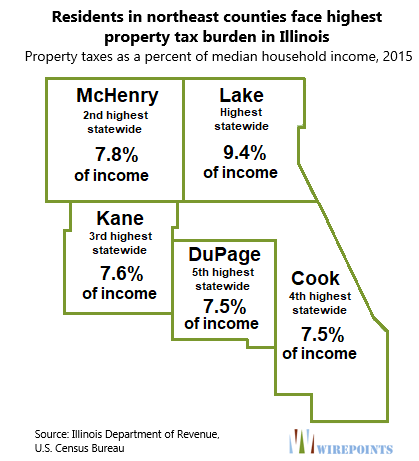 And as it turns out, Lakewood’s residents are also getting a property tax reduction at the county level as well.

McHenry County lowered its own property taxes by 11 percent last month and has urged other governments to follow suit.

So has Lakewood’s Mayor Serwatka: “I believe it is critical that residents even outside of Lakewood understand that this successful property tax reduction effort is about a much bigger picture than just the village of Lakewood.”

Local governments should find the same savings that Lakewood and McHenry County have.

With local reforms, Illinois could finally begin to chip away its massive property tax rates. 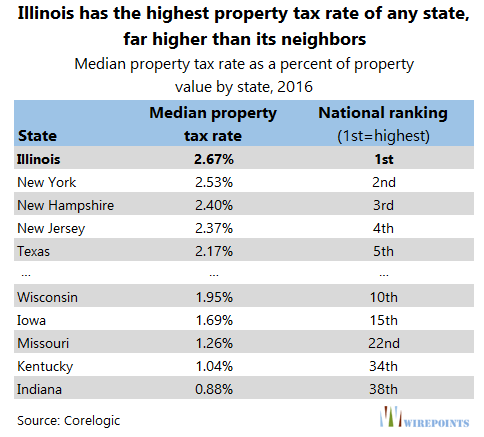 It’s become too expensive to live in Illinois, and too easy for Illinoisans to lower their tax bills by moving right across the border to states with more opportunities and smaller tax burdens.

If Illinois municipalities want to stop the chronic loss of residents from their communities, they should follow Lakewood’s lead.