Illinoisans’ pain from punishing property tax burdens has been building for decades. Homeowners have been forced to pay ever-larger property tax bills even as their earnings have stagnated.

Without real relief that reverses the drivers of property tax increases, Illinoisans will continue to flee from some of the highest property taxes in the nation. 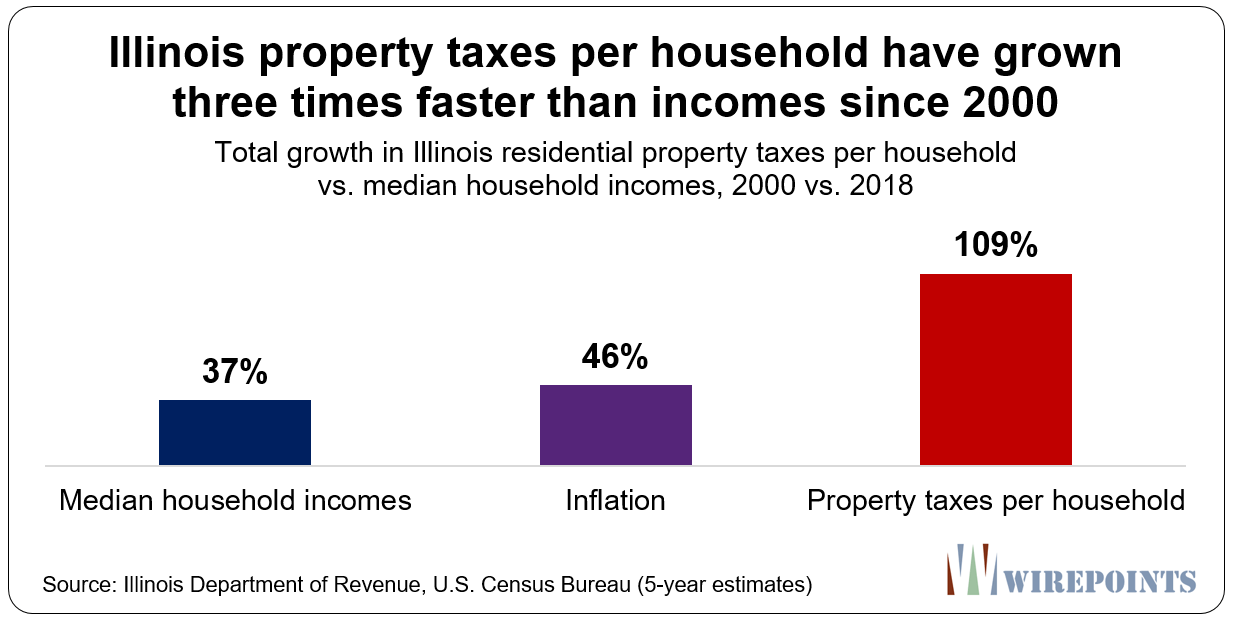 But to more fully understand the pain inflicted on Illinoisans, Wirepoints compared property tax bills to household incomes. After all, those bills are paid straight from people’s earnings.

Between 2000 and 2018, Illinois’ median household incomes increased just 37 percent, far short of inflation. In contrast, household property tax bills were up 109 percent, according to Illinois Department of Revenue data.

That’s a 52 percent increase in the effective tax rate. 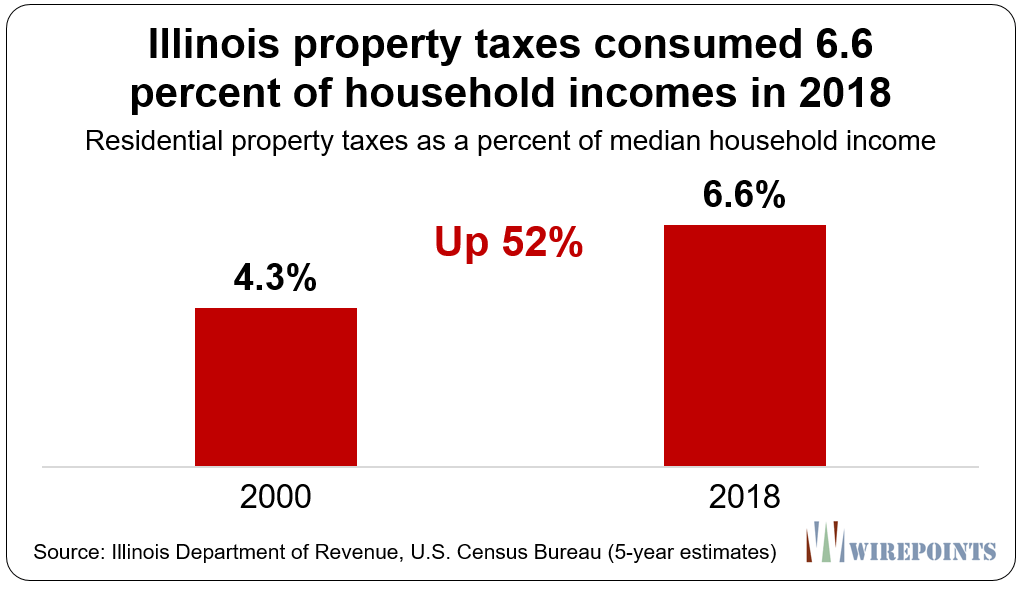 The detailed data is below: 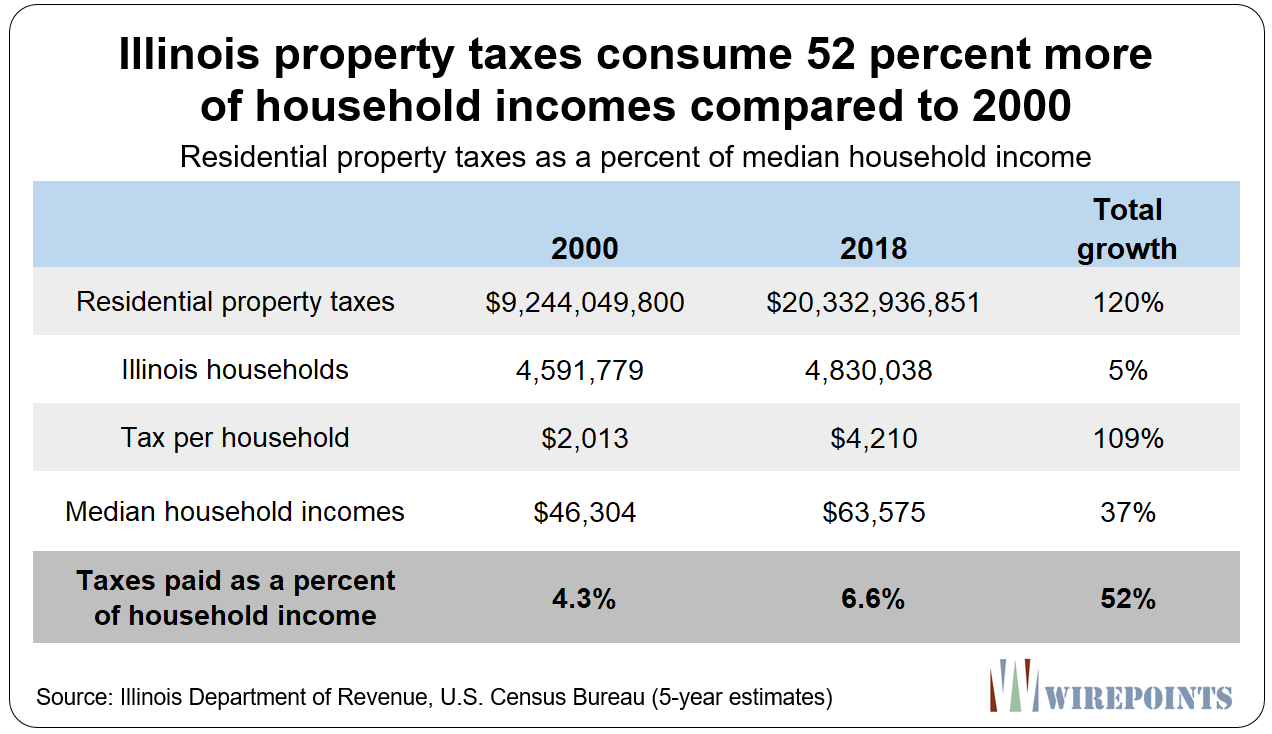 While the statewide numbers capture how big the property tax problem is, the pain is felt locally. Wirepoints calculated the impact on a county-by-county basis and few counties have been spared. 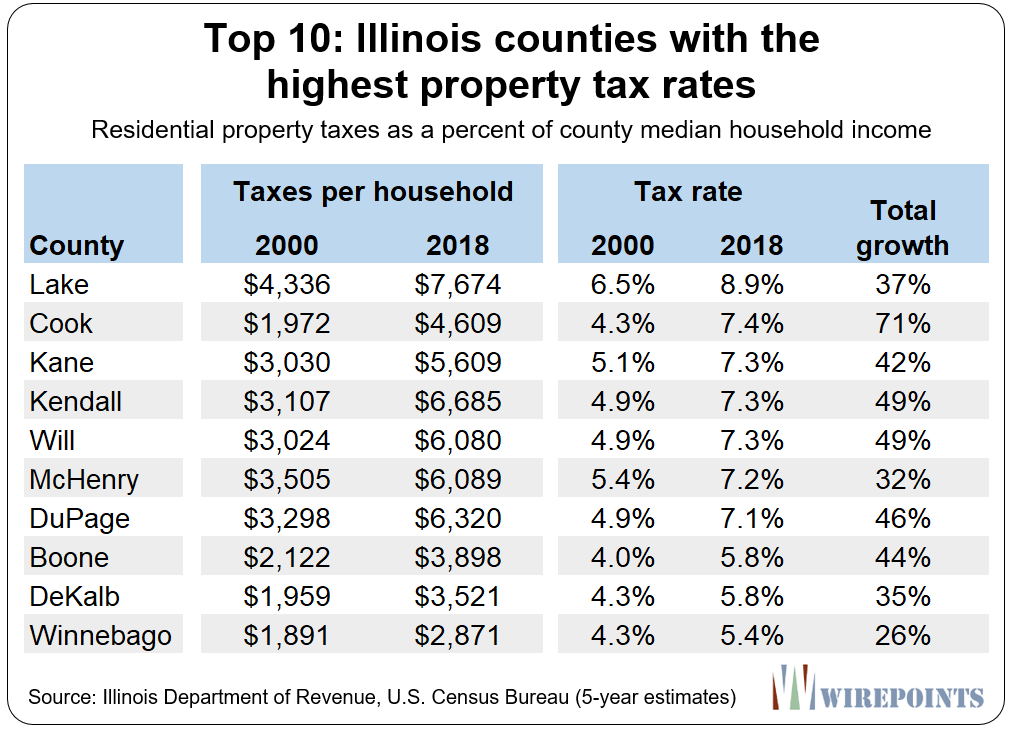 Meanwhile the residents of the other collar counties and Cook pay more than 7 percent of their incomes to property taxes, with average bills ranging from $4,600 to $6,700 a year.

Overall, the collar counties pay the highest taxes as a percent of income in the state. But it’s not just the Chicago suburbs that are taking a hit, taxpayers downstate have seen their taxes rise, too. 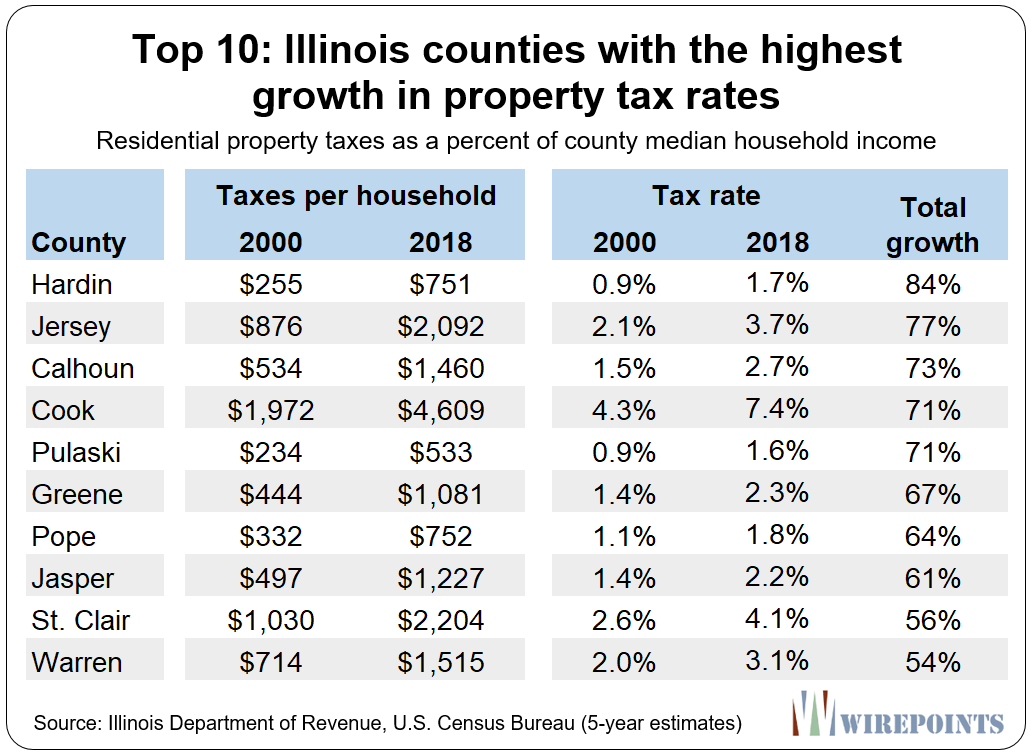 In fact, most of the counties that have had the biggest tax growth, in percentage terms, are found downstate.

Hardin County residents, though they pay low rates, have seen them jump 84 percent since 2000. Residents in Jersey County and Calhoun County have seen their rates go up by 77 percent and 73 percent, respectively.

See how the property taxes in your county have grown:

Any way you cut it, Illinoisans are being punished by property taxes.

We’ve already shown that their math won’t work. And a progressive tax would do Illinoisans no good in any case.

Illinoisans already pay the nation’s highest rates when you add up all state and local taxes together. That’s according to Kiplinger, who calls Illinois the nation’s “least tax-friendly” state.

Shifting taxes around won’t help when the total tax bill is too high to begin with. What Illinoisans need are reforms that actually bring property taxes down by lowering the cost of government. Pension reform starting with a constitutional amendment to the pension protection clause, collective bargaining reforms and local government consolidation are the true ways to bring down tax bills.

Read more about the property tax crisis in Illinois:

Taxes are going to go way up to make up for a huge down turn in the stock market because of the Coronavirus. The honest hard working taxpayer will lose 1/3 or more of their retirement 401K and then be force to make up the lose of the HUGE ILLINOIS PENSIONS. The honest hard working taxpayer are going to be screwed again by the GREEDY cops, teachers and firemen. They love in Florida, keep sending their huge checks down south.

Only the mentally challenged stay in Illinois.
It should be against the law what government has done to the honest hard working taxpayer.
They have destroyed the quality of life for most of the residents.
No business would invest in Illinois and the children can only get jobs at fast food.
Government workers are the economic enemy of the working class.

Call a U HAUL and move as fast as you can. Run for your economic life.
Start a new higher quality of life anywhere but Illinois.

This is a symptom of government. It’s been allowed far too much authority to do what it wants, at the cost of individual property rights, freedom and liberty. Property taxes NEVER should have been allowed in the first place. They are effectively charging rent on property you’re supposed to own, which would bad enough under principale, but add on to waste, corruption and general pissing away of money…

*BTW Has this site now caught the eye of many leftists, socialists and communists? I’m seeing many vote downs on logical comments.

The downvotes have been going on for months, just not consistently. There were a whole lot of them during the teachers’ strike, for example.

A notable exception to stagnant incomes would be many state and local public sector workers and retirees. 3% annual COLA hikes resulted in an 80% cumulative COLA hike over 20 years. Annual salary hikes easily exceeded that for many if not most public sector workers. Lots of teachers and administrators in the Chicago area, just to name one group, were getting 5-6% annual pay hikes for much of that that period. The combination of the annual salary hikes and COLA hikes results in a very happy large voting block. However doing so while pensions are grossly underfunded, property taxes were… Read more »

Jabba and his criminal Democrats have made it abundantly clear THEY DON’T CARE. They are actively encouraging you to move to surrounding states. In fact, they want you to move. Middle class Republican voters just get in the way of the infanticide, legal weed, gambling and additional taxation.

One workforce sector has seen extremely higher salary growth over 18 years: retired teachers with 70% rise (1.03^18) in earnings vs. working Illinoisans 37%. A straight line can be drawn between parabolic rise in property tax rates and earnings of Illinois teachers. One workforce sector should take note and question whether Illinois is not toxic to their kind: Medical professionals are triply exploited by Illinois policy which values public sector without regard to devastation of all other residents: *Medical professional earnings suffer higher relative taxation (FICA withholding not suffered by teachers, and limits on amounts of private tax-deferred retirement savings).… Read more »

This is a brilliant article and just as brilliant of a Comment! I’m flying to TX right now, but I will respond / add more, later. I handled retmt plans for many types of Employers, including one hospital, almost all of them ditched their traditional final average pay DB Pension plans long ago, and nurses would retire with not much net worth of retmt money, for several reasons, the biggest I believe is taxation, in my state Maryland it’s horrific, similar to ILL. More later.

I don’t think you understand my point, but what is Texas’s problem, I haven’t looked at it.

Nurses and docs must react in self defense to Illinois policy. No agency can or will protect them from the predatory brutality of Illinois political industry. If leaving the state is impossible, leaving the profession is an alternative to consider. I wonder what political spin would be if nurses insisted that their professsion is just as valuable to society as teachers, therefore Illinois must create a parallel and equal system of nurses compensation including: 1. Age 55 Early retirement, with ability to work the same job “tetirrd” from. 2. Taxpayer guaranteed defined benefits of 95% age 55 salary )after contracted… Read more »

5
Fed up neighbor
Reply to  Susan

Very well said, my daughter was, and I stress was a RN in Illinois. She said enough, like you said high taxation on her salary, insurance, license fee which is exorbitant in Illinois. She left and is now a traveling nurse and residing in North Carolina. Makes much better money and taxation is much much cheaper.

Well said. My wife is a nurse and another point is how many nurses get hurt on the job vs teachers getting hurt. How many nurses do you know with back/shoulder/neck injuries and suffering lifelong pain and in some cases career ending injuries? Probably many. Also being around patients with every disease known and putting patients needs first before theirs and still smiling,consoling families when prognosis is dire. Watching patients and families grieving over loved ones pain and suffering when nothing can be done. Watching doctors prescribe pill after pill but nothing nutritional and wondering why they don’t get better.… Read more »

Agreed
Nurses should demand parity with teachers.
Let politicians explain why it is fiscally sustainable for teachers but not nurses.
Then nurses must decide where their compassion should be spent …is Illinois worthy of their sacrifices?

3
Fed up neighbor
Reply to  Freddy

Thank you sir, the stories I’ve been told by my daughter are absolutely heart breaking. And yes the abuse they endure from patients on a daily basis. My other gal is a firefighter paramedic, you don’t want to know the horror stories.

I’m guessing the CPS nurses don’t have it so bad.

Which is why as a family practice PA I left the state for NC several years ago. I can get a job anywhere; why live in Illinois? Oh, and Illinois Medicaid pays an office $42 for a typical 99214 office visit; in NC the same visit pays $89. It’s great to live in a state that isn’t broke!

Physicians get sued… IL among the worst in this aspect too. A lot of my friends will be leaving IL on this basis as well. We will just come back to visit in the summers, lol, make everyone learn the hard way.