We’ll never know if State Comptroller Susana Mendoza was joking or not in the comment reported by the Tribune. But what she said, “The weather only weeds out the people who don’t deserve to live here,” deserves attention. Both Chicago and the state are losing population and it’s a serious issue if you care about fixing Illinois. 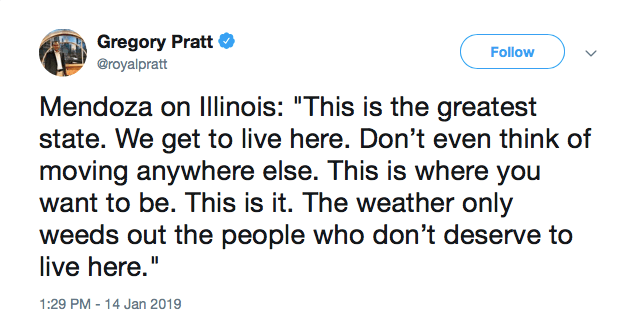 What Mendoza says matters because of who she is. For one, she’s owns the bully pulpit of the State Comptroller’s office. And second, she’s running for Mayor of Chicago. If she and other politicians keep promoting weather as the reason for why Illinoisans are fleeing, they’ll never seriously address the crises that force people to leave in the first place.

Perhaps they think if they repeat “weather” long enough, it will lull Illinoisans into ignoring the state’s growing outmigration.

The weather isn’t Illinois’ problem. Here are the facts:

Illinois is a net loser of residents to all of its neighbors. For sure, Illinois loses residents to sunny Florida and Arizona. And so does much of the Midwest. But Illinoisans aren’t just leaving for sunshine. Everyone of Illinois’ neighboring states netted out wins versus Illinois, according to the most recent IRS data on state-to-state migration. Take cold Wisconsin, for example. Illinois lost more than 17,000 residents to the Badger state. In return, Illinois only gained about 11,000. The net was a 6,000 resident loss.

The same story played out in every neighboring state. In all, Illinois lost a net of nearly 22,000 to its neighbors in 2016 alone. 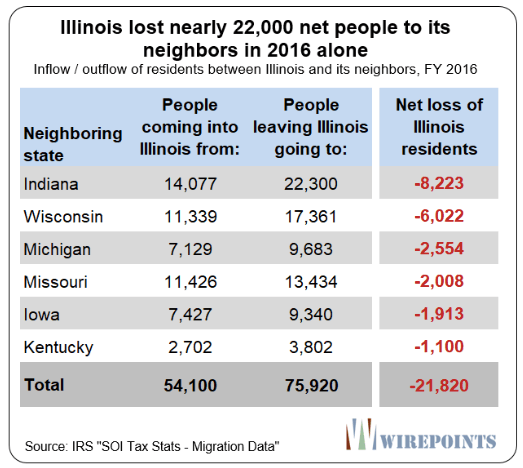 Illinois joins West Virginia and Connecticut as the only states in the nation to shrink five or more years in row.

Illinois is an outlier nationally when it comes to losing people. Illinois’ lost 114,000 people to domestic outmigration in 2018. It’s one of the nation’s biggest losers of residents to other states – not just in numbers, but in proportion to its population.

By comparison, none of Illinois’ neighbors were on the list of the 20 worst-losing states. In fact, both Kentucky and Indiana actually made small gains from domestic in-migration.

Illinois isn’t shrinking just because people are leaving. International immigration is down by half. Back in 2001, over 60,000 foreigners made Illinois their home. In 2018, only 30,000 did.

Meanwhile, Illinois’ neighboring states lost a much smaller percentage of their international immigration during that period. In fact, Iowa and Kentucky have seen small increases in immigrants since 2001.

All of the above speaks to an obvious fact: Illinois is an outlier when it comes to losing people. The state’s politicians give its residents plenty of reasons besides the weather to leave.

Take the state first. More than 300,000 manufacturing jobs have disappeared since 2000. The state is home to the nation’s worst pension crisis – which means ever-higher taxes. Public university costs for students keeps rising. And of course, there’s the fact that Illinois imposes the nation’s highest property taxes.

Poll after poll shows that half of Illinoisans want to leave the state. Their number one reason: taxes.

Chicago is a whole other mess. The city has a massive retirement crisis of its own, with each household facing a combined $140,000 in pension debt. Tax hikes of all kinds are hitting Chicagoans. CPS is also losing students and many of its schools are now empty. And crime continues to be rampant.

Not to mention the corruption, recently highlighted by the Ald. Ed Burke investigation.

Which brings us back to Mendoza and her comment.

If she was joking, then it’s yet another example of politicians not taking Illinois’ growing flight of residents seriously. And if she wasn’t, then it’s an example of just how out of touch Illinois politicians really are.

I left Illinois for Michigan in 2018, because the winters are so much warmer in Michigan. She is a clueless political hack!

She is likable, bought, and it appears not very smart.

I beg to differ. She’s not likable — she annoys the shit out of me.

Chicago is not Illinois. Illinois is a second class citizen. Chicago enjoys low property taxes. Maybe that’s what she meant. How come none of these mayorals are not campaigning on how relatively low property tax rates are in Chicago? Isn’t that something to celebrate? Nope these types can’t bring themselves to celebrate low tax rates. The minute Chicagoans have to pay suburban taxes rates, an exodus. She won’t celebrate because that’s her ace in the hole, she will need to increase rates, Illinois is tapped our.

What amazes me is that there were 54 thousand people moving form other states into Illinois. I would have thought Illinois influx would be almost wholly from illegal aliens. I am actually amazed that 54 thousand people who had other options would choose to come here- totally astounded. I am really surprised anyone from Kentucky or Indiana would move to this despicable state. I tonight, culturally, those folks had pride. Why anyone would move to this loser state is beyond me.

So they DO realize that this place is a nightmare for taxpayers and their response is to disparage them.
“Sit still, stay put while we poo on you!”
Nice, real nice.

No, I don’t think she was joking. She really is that delusional. The whole “don’t deserve to live here” thing is one of the most arrogant, condescending and borderline racist statements I have ever heard a politician make.

May 29, 2020
Was it because his “science and data” somehow changed? Or was it because he feared having his vast emergency powers challenged in the United States Supreme Court?
View Comments (12) | Add Comment

ABOUT US
© Wirepoints Corp.. 2012 - 2020. All rights reserved.
Contact us: admin@wirepoints.org
FOLLOW US
wpDiscuz
8
0
Would love your thoughts, please comment.x
()
x
| Reply