Illinoisans have another reason to worry about their future – their state government is unprepared for the next recession. That means when the national economy finally slows, Illinoisans will get hit far harder than residents nationally.

A new report by Moody’s Investors Service finds Illinois and New Jersey are the two weakest-prepared states in the country for whatever financial damage the next recession will cause.

The warning of sorts is yet another reminder that Illinois needs deep structural reforms, including an amendment to the pension protection clause, to restore financial stability and flexibility to the state. And it’s a further condemnation that Illinois’ business as usual – more taxes, more borrowing and pension can-kicking – have brought Illinois to the brink of a junk credit rating.

Here’s what they said:

‘While current economic conditions are strong, states are aware that a downturn will come eventually and are building reserves to prepare,’ said Emily Raimes, Vice President and Senior Credit Officer at Moody’s. ‘While most states have healthy reserves and inherently strong fiscal flexibility, Illinois and New Jersey both have low levels of reserves relative to the potential revenue decline in our recession scenario. In addition, they both show weakness in their pension risk scores.'” 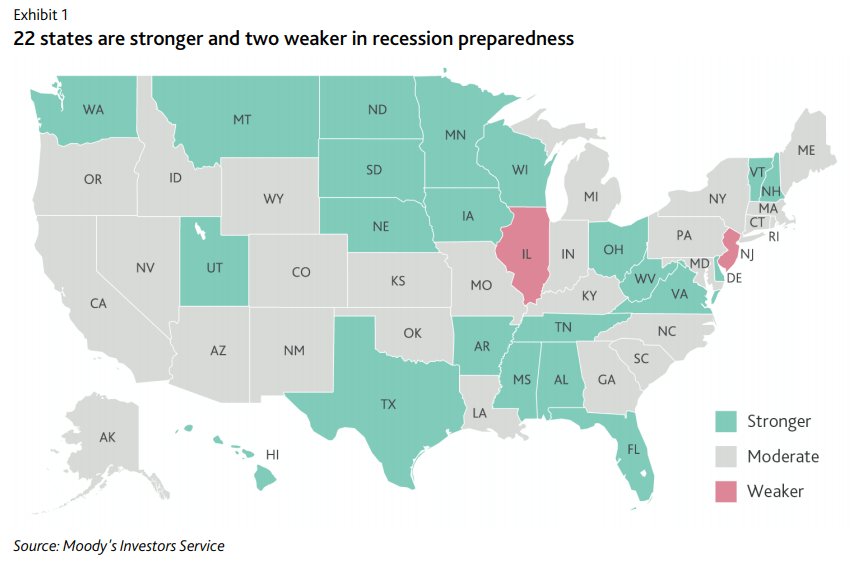 Moody’s says Illinois has some of the worst financial reserves of any state in the nation. Only four states have less available cash on hand to pay for emergencies than Illinois does.

The agency also found that Illinois has very little financial flexibility to deal with a recession. Nearly 40 percent of Illinois’ annual budget is consumed by “fixed costs” like pensions, debt service and Medicaid. Illinois is the nation’s outlier. That means core spending on other priorities like education, social services and public safety would be cut under a harmful recession.

The agency also found Illinois is the extreme outlier when it comes to the damage a recession would wreak on its pension funds. Illinois stands alone as the worst off in the nation according to Moody’s pension “stress test.”  No only would a recession force economically-struggling Illinoisans to pay billions more into pensions when they can least afford it, but it could also bring many funds to the brink of total insolvency, risking benefits for government workers.

Illinois is in dire financial straits, as the above graphics show. The state is an outlier in most fiscal categories nationwide, and in many cases, Illinois is the extreme outlier.

The current “panacea” offered by Gov. J.B. Pritzker, a progressive tax scheme, does nothing to address the underlying structural causes of Illinois’ mess. Tax proponents may get the tax hike they want, but look it for it to accelerate Illinois’ downward spiral. Instead of fixing Illinois, it will  only perpetuate the status quo and do further damage to the state’s competitiveness.

Moody’s warns a recession could have an “adverse impact” on Illinois’ credit. And seeing as Illinois is just one notch from junk, there’s only once place the state can go. That’s something nobody wants.

I’m curious what kind of contagion effect an Illinois default would have on other municipalities across the nation — if the contagion risk is high, I would not rule out a federal bailout of some kind, as much as that would utterly disgust me.

There is that phrase again “just above junk”. Moody’s should change it to “just where we want you”. Moody’s will never rate us junk, the people that pay them are having a grand old time with the highest yields. Every force in play the politicians, bond holders, unions, and the rating agencies are all enjoying a profitable ecosystem. They make the laws and set the risk ratings and set the tax rates. While the taxpayer and next 10 generations of their kids are handed the bill.

If Illinois does get the ‘junk’ rating, wouldn’t that dry up the credit? Illinois is a money junkie…. it will foolishly spend provided some other fool is willing to lend. Illinois makes owners of property victims with abnormally high taxes. The state provides minimal service at maximum cost. Am I a bad person for wanting Illinois to fail?

Not at all. For years the state has been held hostage by Mr Burns, er Boss Mike and his cronies. I can only hope their hubris comes home to roost before the old man finally croaks.

Actually Moody’s and the bond holders are a worse foe to the taxpayer than Madigan. Its all borrowed money now, the bond markets are making a killing off Illinois taxpayers. Moodys ikes to write these studies to make them look credible, but they are really the ones running the ponzi scheme. They could end all this usary with a junk rating, but they won’t, as bad as it can get Moody’s will never dare to move Illinois to junk.

I am no fan of Moody’s, but look at the conflict of interest they have – they work for the issuers of debt – in this case Illinois and the City of Chicago. Imagine if a dating agency was engaged by taxpayers. The ratings would plummet to the tiny step just above default.