Look for lawmakers to paint Moody’s recent report on Illinois’ proposed progressive tax scheme as a positive endorsement. The ratings agency said the new scheme would give the state more flexibility in tackling its pension crisis and budget deficits.

But if you parse the report’s words closely, the agency gives little room for Illinois to operate. In fact, Moody’s requirements for a credit positive outcome for the tax are nearly impossible for Illinois to achieve. If anything, Moody’s report should send up alarm bells. If lawmakers fail to meet the agency’s requirements, the tax could even lead to more downgrades.

In its report, Moody’s listed three requirements Illinois’ progressive tax would have to fulfill for the agency to consider it a positive for Illinois:

“A positive outcome for the state’s credit standing would require that the new system (1) yield substantial net new revenue, (2) without material damage to the economy, and that the new revenue be (3) largely allocated to addressing the state’s retirement benefit liabilities on a recurring basis.”

The problem is the state can’t accomplish all three of those things at the same time – not without major, structural reforms. Illinois is in simply too big of a fiscal hole.

The state has operating deficits of $1-$3 billion, over $6 billion in unpaid bills, and is underfunding its retirement costs by at least $8 billion annually. To raise that amount of money, any progressive income tax that politicians create would have to hit the middle class along with the state’s wealthy taxpayers.

And those billions will all go to pay down old debts, not fund new services. That’s not a good way to encourage people to stay in Illinois.

Let’s take each of Moody’s requirements in turn:

Gov. J.B. Pritzker’s “fair tax” offer is supposed to raise $3.4 billion. That’s not “substantial” net new revenue anyway you look at it – neither for what’s needed to fund Illinois’ structural mess, nor for what’s needed based on Moody’s own analysis.

To begin with, absent reforms, Wirepoints calculates the state needs at least $5 billion more in pension funding annually to actually pay for the true cost* of its pension promises. Actuaries also say Illinois needs $3 billion more in contributions to properly pay down its $73 billion in retiree health insurance debts.

Add $1 billion annually to pay off the state’s unpaid bills over the next decade, plus $2 billion or so for the state’s structural overspending, and Illinois’ total new revenue needs is at least $11 billion. 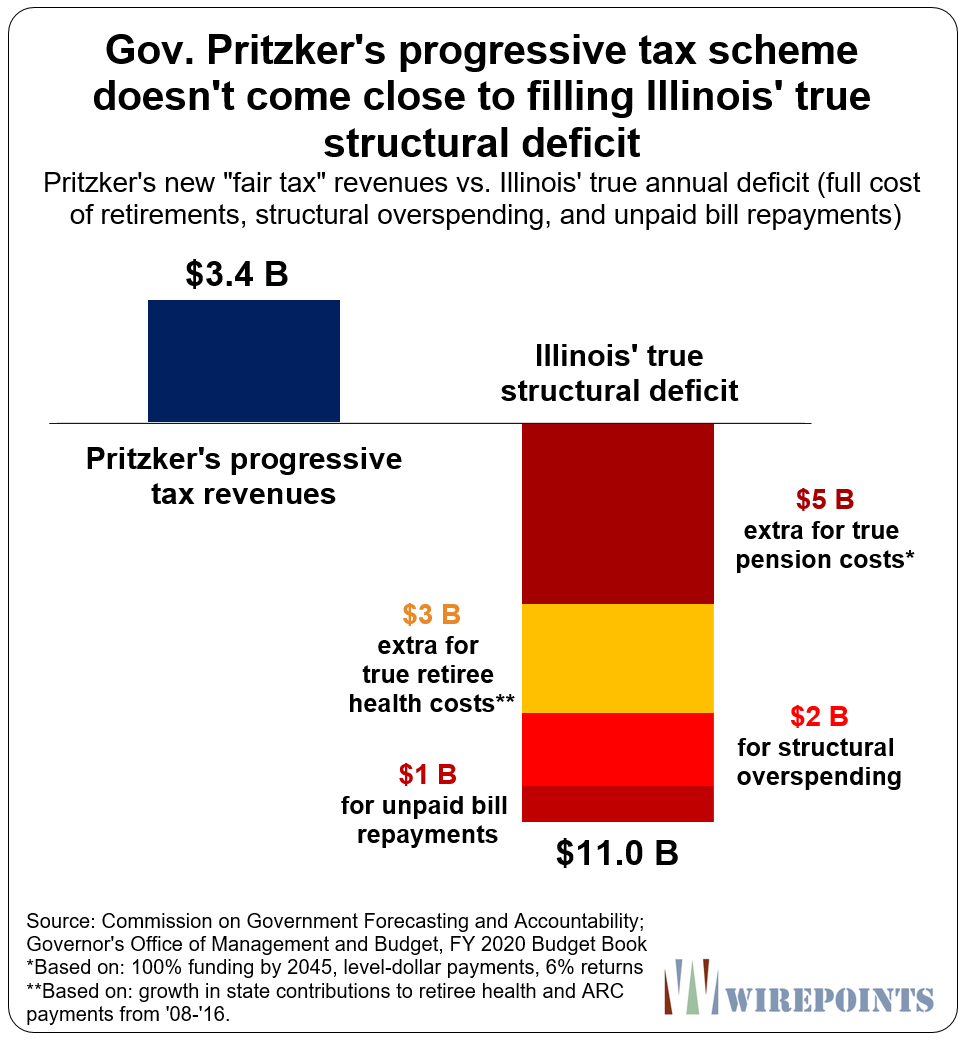 The governor’s $3.4 billion in new taxes falls far short of that.

That amount also falls far short of what Moody’s calls for.

The agency says the state needs at least another $3.5 billion for pensions just to reach “tread-water” funding levels – the amount needed to keep the state’s unfunded liabilities from getting even worse.

And Moody’s is being generous in that assumption. Its “tread-water” amount is based on the state’s official, rosy actuarial assumptions. Officially, Illinois owes $134 billion in pension debts. Moody’s more realistic calculations say the state owes $234 billion. Under those debt levels, Illinois would be forced to pump even more money into pensions every year.

The point is that none of the progressive tax structures proposed so far even come close to yielding the “substantial net revenue” needed to deal with the state’s pension and deficit problems.

That’s a real problem for progressive tax proponents. Their biggest selling point of their $3.4 billion plan is that “97 percent” of Illinoisans would get a tax cut under the governor’s rates. But they’ll have to raise a lot more money if they’re going to meet Moody’s requirement for “substantial” new revenue. And the most-likely place they’ll go to get it from is the middle class.

Not only will that break one of Pritzker’s promises, but it would cause Illinois to fail Moody’s second requirement.

2. “Without material damage to the economy”

Moody’s also says it will only consider the progressive tax a positive if it also doesn’t cause “material” damage to the state’s economy. The agency’s report warned that the state’s consecutive population declines suggest “a lack of economic dynamism and vulnerability to a national recession or any other factors that would weaken the state’s economy.”

But a damaged economy is inevitable due to the amount of money tax hike proponents will have to raise. There simply isn’t enough money in Illinois’ top income brackets for lawmakers to only hit the rich. The middle class will get hit hard, too. Wirepoints proved that in What Pritzker’s progressive tax rates will probably look like.

Illinois’ overall mess, high taxes included, is already doing deep damage to the state’s tax base. The state is losing a hundred thousand people, and the income that goes with them, to domestic out-migration every year.

Since 2007, Illinois has lost an average of $2.6 billion in Adjusted Gross Income every year as more people have moved out of Illinois than moved in, according to migration data from the IRS. 2016 was a record year with the state losing nearly $5 billion in taxable income. 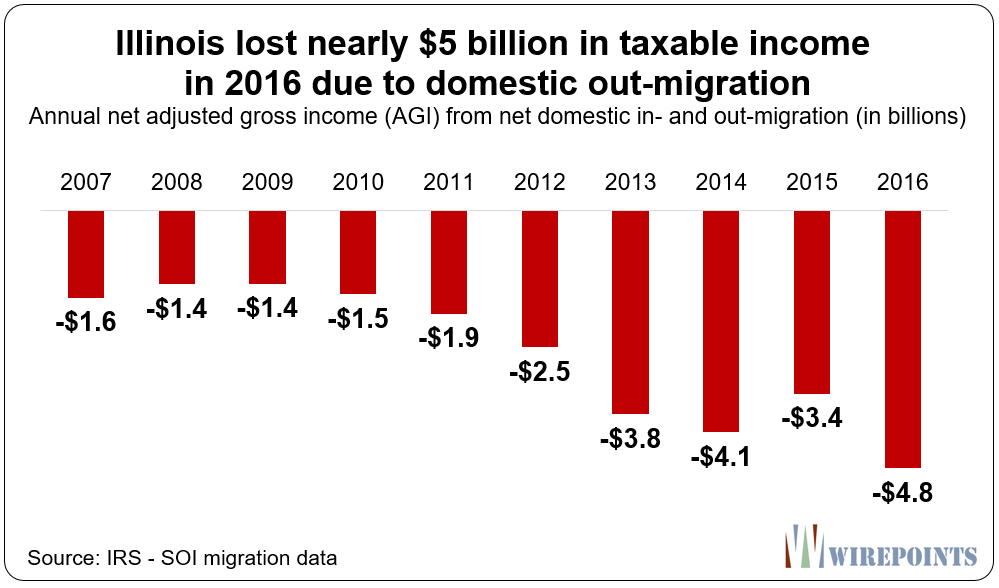 Add all those years up and Illinois would have $26 billion more in taxable AGI today if migration had simply been flat. That translates to over $700 million in additional tax dollars Illinois could have had for this year’s budget alone.

What’s worse, Illinois is a major outlier when it comes to out-migration. Illinois loses more taxable income per capita to out-migration than almost every other state in the country. In the last decade, the state has consistently been one of the worst performers in terms of adjusted gross income loss due to out-migration.

A new tax hike on the middle class will add yet another reason for residents to seek better opportunities in other states. Especially when the tax hikes won’t be funding any new services. Instead, all those billions will go to pay down debts for services already rendered.

3. “Largely allocated to addressing the state’s retirement benefit liabilities on a recurring basis”

Moody’s third requirement is that the tax revenues raised by Illinois be “largely allocated to addressing the state’s retirement benefit liabilities on a recurring basis.”

That in itself is problematic in the absence of pension reform.

Today, retirement costs for public sector workers in Illinois already consume more than 25 percent of the state’s budget. But the true costs of retirements, if properly calculated and paid for, would eat up nearly 50 percent of the budget. That’s by far the worst in the country. Wirepoints covered that recently in its piece titled: Why Warren Buffett is right to warn about Illinois: The state’s true retirement costs now total 50% of annual budget. 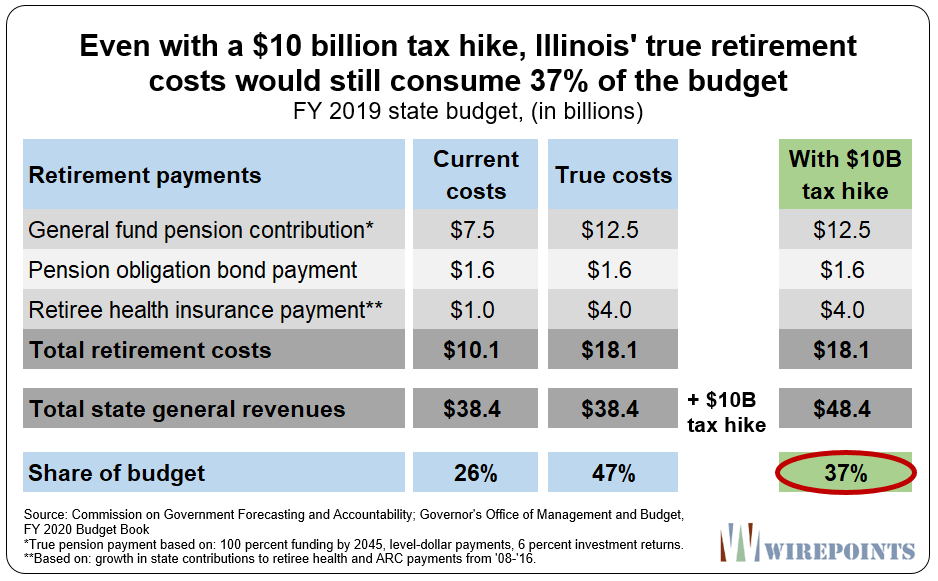 That would still leave Illinois ranked dead last nationally when comparing true retirement costs as a percentage of budget.

Moody’s has a history of punishing Illinois for its poor governance and its failure to rein in its pension costs.

The agency downgraded Illinois twice during the 2011-2014 temporary tax hike, even though 90 percent of the state’s $7 billion in yearly new taxes went to pensions.

Since then, Moody’s has dropped the state down to just one notch above junk status and has since warned that Illinois’ constant out-migration has become a serious credit concern.

Today, Illinois politicians have no room for error. If lawmakers play their usual games, Illinois will become the first state to be labeled junk.

Which makes you wonder. Why didn’t Moody’s just demand spending reforms from Illinois instead of asking lawmakers to do something that’s virtually impossible for them?

Read more about why a progressive tax would harm Illinois’ middle class:

material damage to the economy LOL LOL. More tax will mean more businesses and taxpayers leave, which will create increased taxes, more foreclosures and well, you people know these dominos

Moody’s is the taxpayers mortal enemy, the great enabler of our alcoholic leaders. It is time the bond holders start suffering in a major way through outright default, the taxpayers have done enough of the suffering as the collateral in a giant Ponzi scheme. instead of manipulating the very thing they are charged with rating, which in itself is a conflict. Moodys need to just rate fairly the situation as it is, not as how they hope to get the taxes raised. Make it junk Moody’s, today, stop this usary.

I do not take issue with 100% funding of pensions by 2045 or the 6% annual return assumption, but level, equal-dollar contributions seem silly when state revenues (in the absence of tax changes) could reasonably be expected to grow 3% annually with inflation and very modest real economic growth. Leaving the health care part (which most states do not pre-fund but simply pay out of general revenues each year) out, in FY 2019 the required level contribution and payments on the pension obligation bonds, by your numbers, total 14.1 billion and represent about 37% of state revenue. In 2045 these… Read more »

Well, here’s to hoping about 250 billion just pops up out of no where, just like the 1.5 billion did.

So who or what is Moody’s protecting ?

continuing to kick the can down the road…its not going to end well for the pensioners….

… And I for one will laugh when the state doesn’t have the money to pay them.