New Illinois Gov. J.B. Pritzker got a warning of sorts from Moody’s ahead of the governor’s first budget address. The rating agency’s most recent report* highlighted the usual crises Pritzker must tackle: ballooning pension debts and chronic budget deficits. Moody’s rates Illinois just one notch above junk largely due to the state’s finances and malgovernance.

Moody’s says new revenue likely will be required to achieve stability, as you’d expect, because rating agencies love higher taxes. But for the first time, the agency has included outmigration among its top-three credit concerns. That matters because Pritzker’s number one prescription to “fix” Illinois is tax hikes, something that’s sure to accelerate Illinois’ out-migration trend and further erode the state’s tax base.

Moody’s calls it a “conundrum” for Illinois. From their report: “… the population loss and relatively sluggish employment trends suggest a degree of economic vulnerability that poses a conundrum: revenue growth from existing sources will be too tepid to offset escalating fixed costs, while new taxes could threaten to increase the outflow of residents.”

These new comments are significant because Moody’s has long considered tax hikes a budget-balancing option for the state. That’s not surprising since Moody’s priority is the well-being of bondholders, not taxpayers. The agency’s ratings reflect the likelihood that bondholders get repaid – and tax hikes make repayment more likely.

But that’s only true as long as tax hikes don’t destroy the tax base and, ultimately, make the repayment of bonds less likely. It appears the flight of Illinoisans has gotten so big that Moody’s can no longer ignore it.

Moody’s reported: “From 2013 through 2018, Illinois lost 544,541 residents through migration to other states (net of people who migrated into the state). This number amounted to 4.2% of Illinois’ 2013 population, the third-highest ratio among states [see Wirepoints graphic below]. These figures, though partly offset by foreign immigration and births, made Illinois one of only two states to lose population in each of the past five years.”

Which bring us back to Illinois’ usual problems.

Moody’s writes that Illinois is already stretched to the limit paying for pensions – yet the plans require still more just to keep the debt from growing: “Illinois faces burdensome – and growing – pension contribution requirements under state law, even though its annual pension payments are insufficient from an actuarial perspective.”

The ratings agency paints a grim picture, especially considering Illinois taxpayers have seen state pension debts grow by $80 billion over the decade despite a quadrupling in the amount of money they’re putting in. 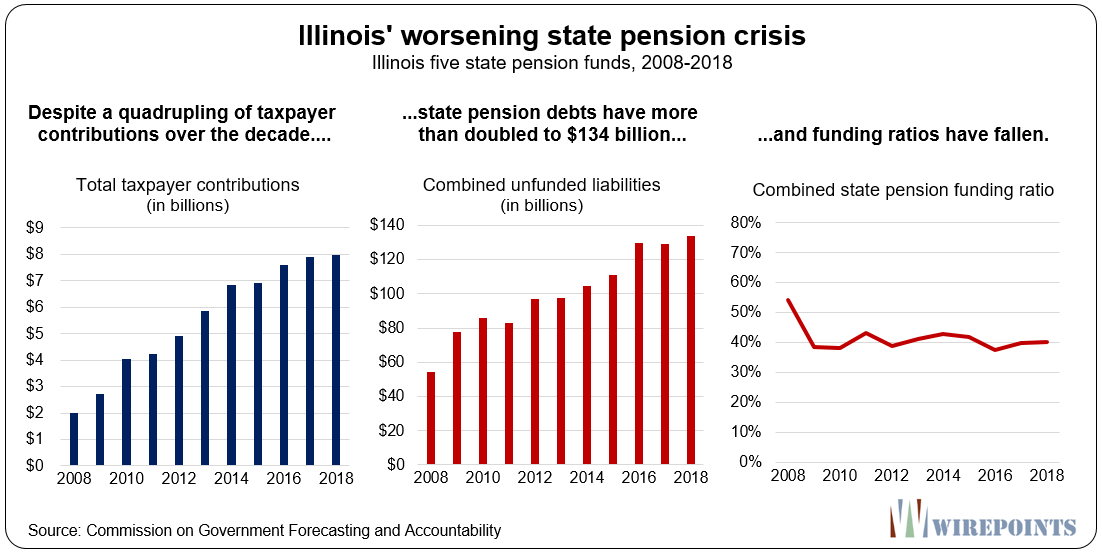 Illinois’ high tax rates, increasing out-migration, enormous debts and a near-junk credit rating should force Pritzker to pursue a constitutional amendment for pensions. A reduction in retirement debts – for both pensions and retiree health insurance – is Illinois’ only true option. But all indications show the governor is loathe to pursue an amendment.

Instead, look for Pritzker to ignore Illinois’ conundrum and the flight of Illinoisans to continue.

Read more from Wirepoints about Illinois’ budget and pension crisis:

*The full report by Moody’s is proprietary.

GR8 article Ted & John !!! It’s amazing Moodys doesn’t slam Pritzker “rejecting moves to reduce retirement benefits for current workers.” Not only must accrued benefits be CUT……COLA should be eliminated immediately, and then retirees AND actives should have their pensions cut by 30% or more. They whole system will collapse if that’s not done. And Pritzker needs to get the state Constitution amended to permit graduated income tax ? How about amending to permit benefit cuts for Retirees and Actives, before it’s too late?

If Moody’s knew so much they would be living in a life of luxury from their investments.

Moody’s is so insightful!

It’s all a show, Moody’s has to do this little show to make it seem like they have a credible analysis. But in the end they will reward pritzker with a non junk rating, a bad rating but non junk which keeps the big buyers in the pool. Big buyers looking for huge non junk yields. This “warning” only makes me believe we are about to be royally screwed over tax wise.

Rick – history shows that your prediction will be correct. But Moody’s report is not irrelevant. Productive people with means read or listen to citations to Moody’s report, putting one more thumb on the scale in favor of migration. Chicago and Illinois are a sad story. My grandparents lived in Lake Forest, but only by virtue of having a house provided to the family by one of the local estate holders in recognition for their personal services as servants. I used to as a kid dream of owning a house in Lake Forest. Now, I could easily afford to do… Read more »

No, Illinois Does Not Send More To Federal Government Than It Gets Back – Wirepoints

August 2, 2020
You cannot claim that Illinois has an unfair balance of payments deficit with the federal government if you also believe that progressive federal tax rates are fair.
View Comments (10) | Add Comment

August 2, 2020
Videos and pictures don't lie. But if you saw those videos then surveyed the news Sunday morning you'd think you woke up in a different city.
View Comments (52) | Add Comment

“Speaker Madigan and others have built up this amazing machine that garners money, laws, and power. If Madigan is gone tomorrow that legally corrupt machine is still there.” – Ted Dabrowski on with Tom Miller

July 31, 2020
Ted was on with Tom Miller of WJPF this week talking about ComEd, Speaker Madigan and the Illinois machine. "If Madigan is gone tomorrow Illinois' legalized corruption machine is still there. It's not just Madigan, it's the machine that must be deconstructed."
View Comments (3) | Add Comment