Ordinary Illinoisans may be tempted to support Gov. Pritzker’s plan to change Illinois’ flat tax structure to a progressive one. After all, he’s promised to lower taxes on 97 percent of Illinoisans if they support the switch. Everyone should reject his offer. Simply put, the governor’s “Fair Tax” rates aren’t credible. Here’s why:

Amendment now, rates later. The vote for/against a constitutional amendment will only determine whether a progressive tax structure is allowed or not. The actual progressive tax rates will come later. Support for the amendment means entrusting politicians with what amounts to a blank check. Illinois politicians don’t deserve that trust. 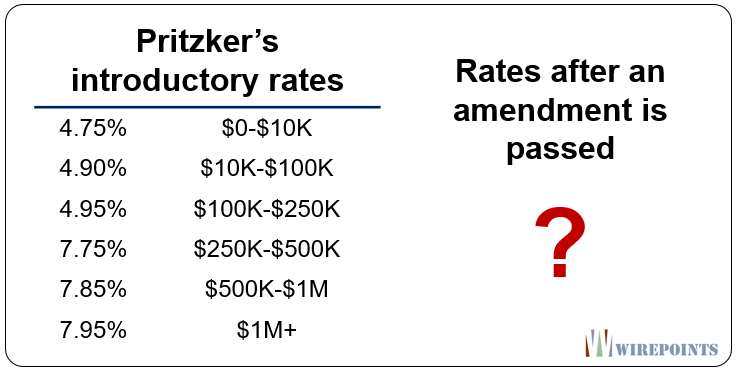 Taxing only the rich won’t work. There’s little incentive for wealthy residents to stay if they get stuck with a 60 percent increase in their income tax rates. The 20,000 Illinoisans who make $1 million-plus currently provide more than 16 percent of the state’s revenues. Only a few have to leave to wreck Pritzker’s plans.

Pritzker’s “Fair Tax” isn’t a real plan. The governor’s low introductory rates raise just $3.4 billion in new revenue, only a fraction of the $10 billion-plus in new spending promises he’s made. It’s much like a cable company offering an “introductory” deal just to rope you in. And remember, Pritzker’s plan does nothing to fix Illinois’ structural problems, which means the state’s fiscal holes will only get bigger. 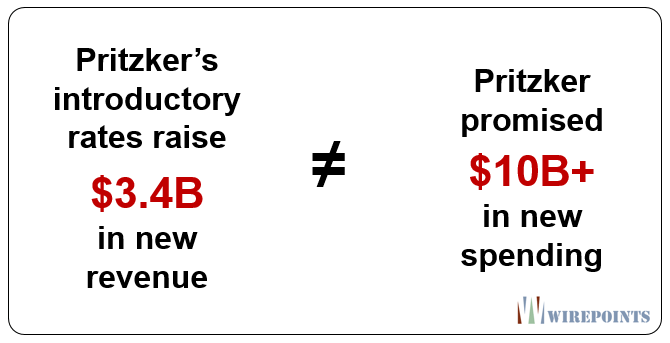 The middle class will be targeted. The governor will eventually need more money to fulfill his spending promises. But there are simply not enough wealthy people for Pritzker to tax. To get the funding he wants, Wirepoints calculated Pritzker will raise taxes on the middle class, starting on incomes of $50,000 and above.

Illinoisans are already burdened with the nation’s highest property taxes and one of the highest overall state-local tax burdens. And we’re already losing people faster than almost every other state. A progressive tax will only hollow Illinois out further.

Here is what Ralph Martire said in Naperville the other night. I have another portion I need to upload to Youtube. Once I have it done I will upload it. Do you mind critiquing it?