At the rate Illinois is losing people, it wouldn’t take long at all for Pritzker’s progressive tax hike to bleed away Illinois’ million-plus earners. There just aren’t that many of them to begin with. And faced with a 60-percent tax increase, the chances are higher they’ll leave.

Ordinary Illinoisans should worry about the consequences. As more wealthy filers move – yes, the rich are fleeing Illinois and they’re taking billions with them – the middle-income residents who remain will be forced to pay higher taxes to pick up the slack.

In total, millionaires made up just a tiny 0.3 percent of Illinois’ 6.25 million tax filers.

By comparison, 143,000 Illinois tax filers left for other states in 2018. Adding just a fraction of Illinois’ millionaires to that outbound list every year wouldn’t impact out-migration numbers much, but it sure would impact the state’s revenues. About 16 percent of the state’s income taxes come from $1 million-plus filers.

Maybe the wealthy would stick around for a while under the tax. Or maybe they’d start moving some of their income elsewhere. But they’re more likely to leave if they have a big target on their back. It’s hard to imagine that in the most global and mobile age ever, they’d stick around to pay Illinois’ ever-growing pension debts.

And it’s not just the fact that we’d lose our largest taxpayers to other states. It’s that we’d also fail to attract new, wealthy residents. How many rich outsiders will want to come into Illinois if they’re the targets? Especially when they learn that Illinois politicians, including Gov. Pritzker, have categorically rejected a pension amendment that might slow and reverse the speed of future tax hikes.

That’s not idle speculation on our part. No less than Warren Buffett basically told businesses and the wealthy to stay the heck out of Illinois.

Clearly referring to states like ours, he said: “If I were relocating into some state that had a huge unfunded pension plan I’m walking into liabilities…I’ll be here for the life of the pension plan and they will come after corporations, they’ll come after individuals.”

Even though Pritzker and supporters of a progressive tax structure said that they’d go after “millionaires,” their tax plan actually hits everyone making $250,000 or more. 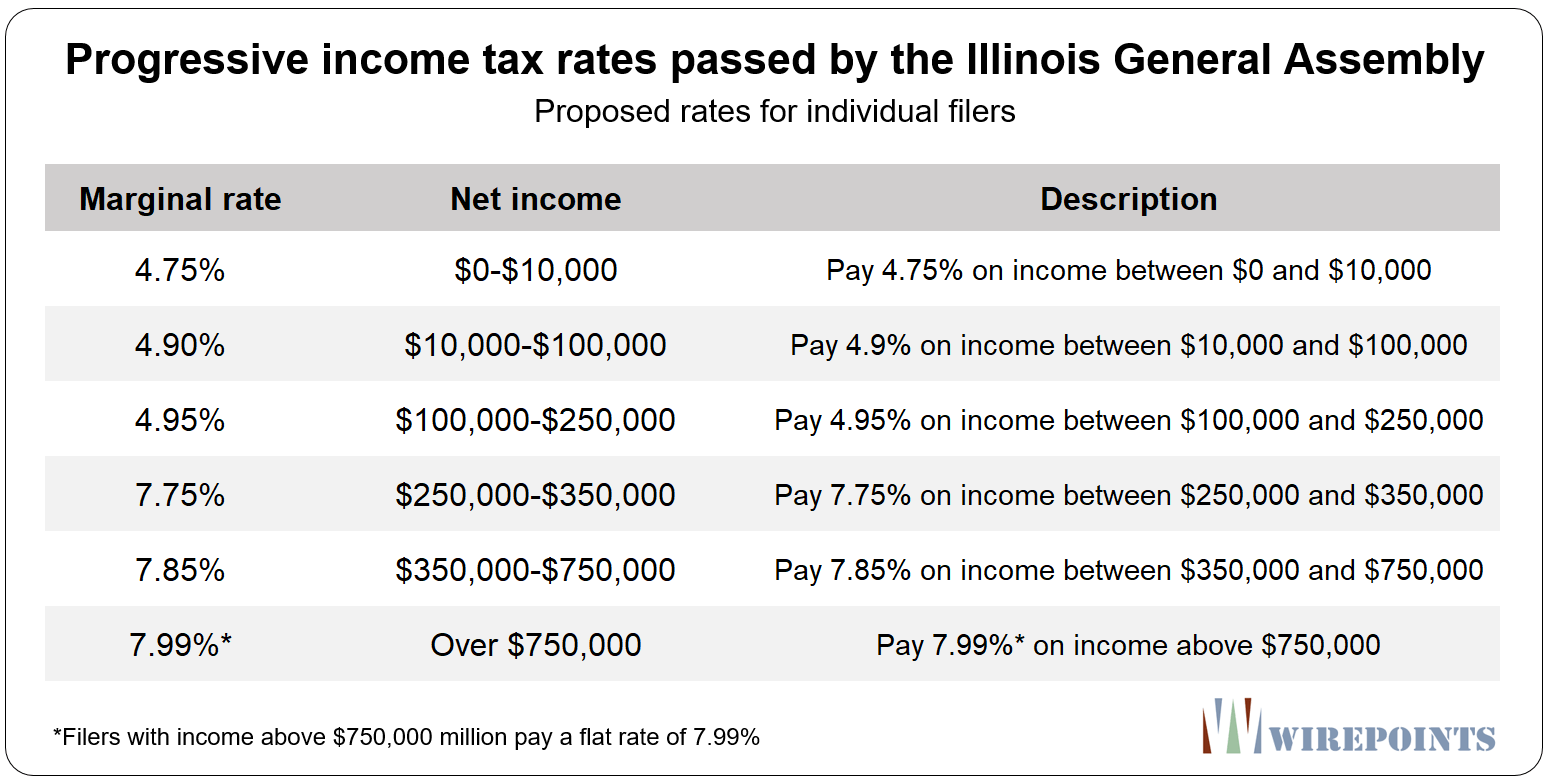 What’s important to know about the progressive tax proposal is that (1) currently, there are no tax hikes proposed for anyone making net incomes of $250,000 and below, and that (2) those with net incomes of $750,000 or more would be hit with a massive 60 percent income tax hike.

The tax data on the wealthy comes from a 2019 FOIA request to the Illinois Department of Revenue that provided Wirepoints with final income tax data for 2016. A FOIA was necessary because publicly available IDOR data doesn’t break out millionaire information. We FOIA’d for more recent data, but we were rejected on claims that the data was not yet available.

So, what are the key facts for those targeted by the tax hike?

– And If you look at those who made $10 million and above, there were only 775 such filers in Illinois. They paid 5 percent of the state’s entire income tax.

– Cumulatively, those who made $250,000 and above made up just 3 percent of Illinois tax filers, but paid 34 percent of all personal income taxes. 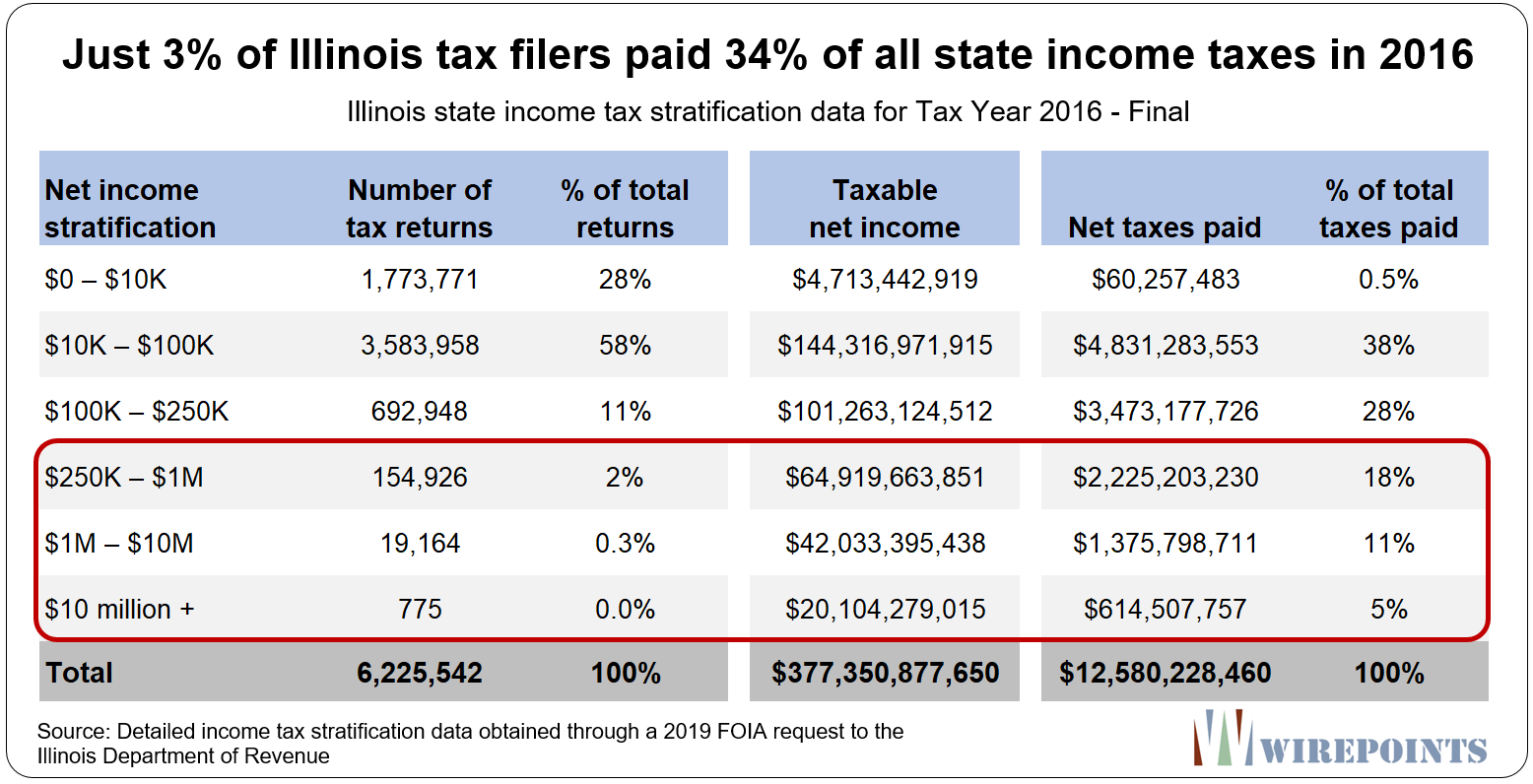 The bottom line is this: It won’t take much to damage Illinois’ tax base beyond what’s already being done. But things can get far worse, especially if the state targets Illinois’ “millionaires.”

And that will leave ordinary Illinoisans stuck with the bill.

Read more about the progressive tax and Illinois’ loss of people and wealth:

As my retired teacher ($125,000 a year Pension) friend said. “If you do not like it than you can move”. I did and it was the best thing I have ever done. No taxes, nice weather and home values that are increasing.
See you all at the beach. Sunny blue skies.

Your teacher friend shouldn’t be encouraging people to move out of IL, because, at some point, there won’t be enough taxpayers left to pay for the massive pensions and free health care.

We will be one of the couples leaving and taking our money soon. Thanks Pritzker! Why aren’t you in jail?

What I find interesting is the people in the 250k to 1mil range account for most of the revenue in the upper tier at 18%, but I imagine they would be the most likely group to pack it up and leave. The mega millionaires are more likely to ride out the tax increase.

From my perspective, I think the $250k to $1M are the most likely to stay, because they are mostly business owners with local contacts, such as lawyers, doctors, factory owners, local supplier, sales reps, consultants, corporate partners with local clients, and so on. The 39 year old partner at a just-below-a Big Four accounting firm, or a very green partner at a law firm, earning and working for every penny of their $400k a year, in downtown Chicago, isn’t suddenly going to pack up all his or her belongings and move to Texas or TN. Because that job doesn’t exist… Read more »

Good points, alot of them are stuck but if they are going to pay the same premium as the mega millionaires, I would imagine a good chunk would seriously consider calling it quits if they are older or moving to a nicer city and starting anew. Should be interesting to watch — lets see if Pritzker even gets the votes.

0
Bob Out of Here
Reply to  debtsor

All good points. I am middle class like most movers and had to move to Ohio to find a good paying job in my field. While taxes aren’t low no matter what kind you’re talking about, the finances aren’t a ticking time bomb like IL. First recession and the clock strikes 0;00 for IL. My best friend and wife, from central IL, relocated to TN last year. He can work remotely as he’s in IT, and she works for a national company and got a job down there. They looked at the proposed tax increase, ran the numbers, and moving… Read more »

Disagree, high income earners have great job skills in demand. Unless you work for the government you can easily move. The tax saving every year will pay for your new Beach House.
NO ONE likes being gouged- and that it what they will do if the tax is passed.
KISS Illinois GOOD BYE.

Regarding the last chart: Do you guys have the breakdown of filing status by Net Income Stratification?

Anyone else concerned that nearly 30% of tax returns filed have income under $10,000?

3
Mike in WI
Reply to  nixit

most of it is baby mommas getting their tax credits for their kids… why do you think marriage rates are so low? Its the tax benefits…

WOW !!!! Per my analysis the State of IL will expect to receive an incremental $10B with these rates in place, including $950M from the top 775 households; under a “static” scoring system. Good LUCK to those of you in the top 775 or even 1,000,000 households by income.

Because of the amount of time that people have had to consider two major Illinois problems – 1) the pensions and debt and, 2) the progressive tax, I think that the Exodus will be even faster than everyone is suggesting if the tax passes. Wealthy people and business people have had this on their mind for a couple years now. As such, they’ve had time to gradually accept that it might be time to move from the place they grew up, and to think about alternatives. Some are waiting for kids to graduate and so on, but you can bet… Read more »

I suspect the next recession will hit about the time Springfield starts feeling the pinch from all the high earners who have left and taken their revenue with them. But hey, JB says we’re moving forward…