The IRS has just released new domestic migration data for both 2017 and 2018* and it shows Illinoisans left the state in record numbers. In both years, Illinois lost more people and more taxable income than in any past year reported by the IRS.

The IRS data complements the new Census Bureau data** that shows near-record out-migration of Illinoisans in 2019.

In 2018, the $5.6 billion in lost taxable income cost the state approximately $230 million in additional income tax revenues alone. That number doesn’t include millions in sales, property, gas, and other taxes that weren’t collected as a result of fewer people living in Illinois.***

And the problem is deeper than that. The Illinoisans who fled in 2018 earned, on average, nearly $19,000 more than the new residents Illinois gained from other states. So not only is Illinois losing people outright, but the people moving in make far less than those who are leaving.

Here are the facts from the latest Internal Revenue Service release: 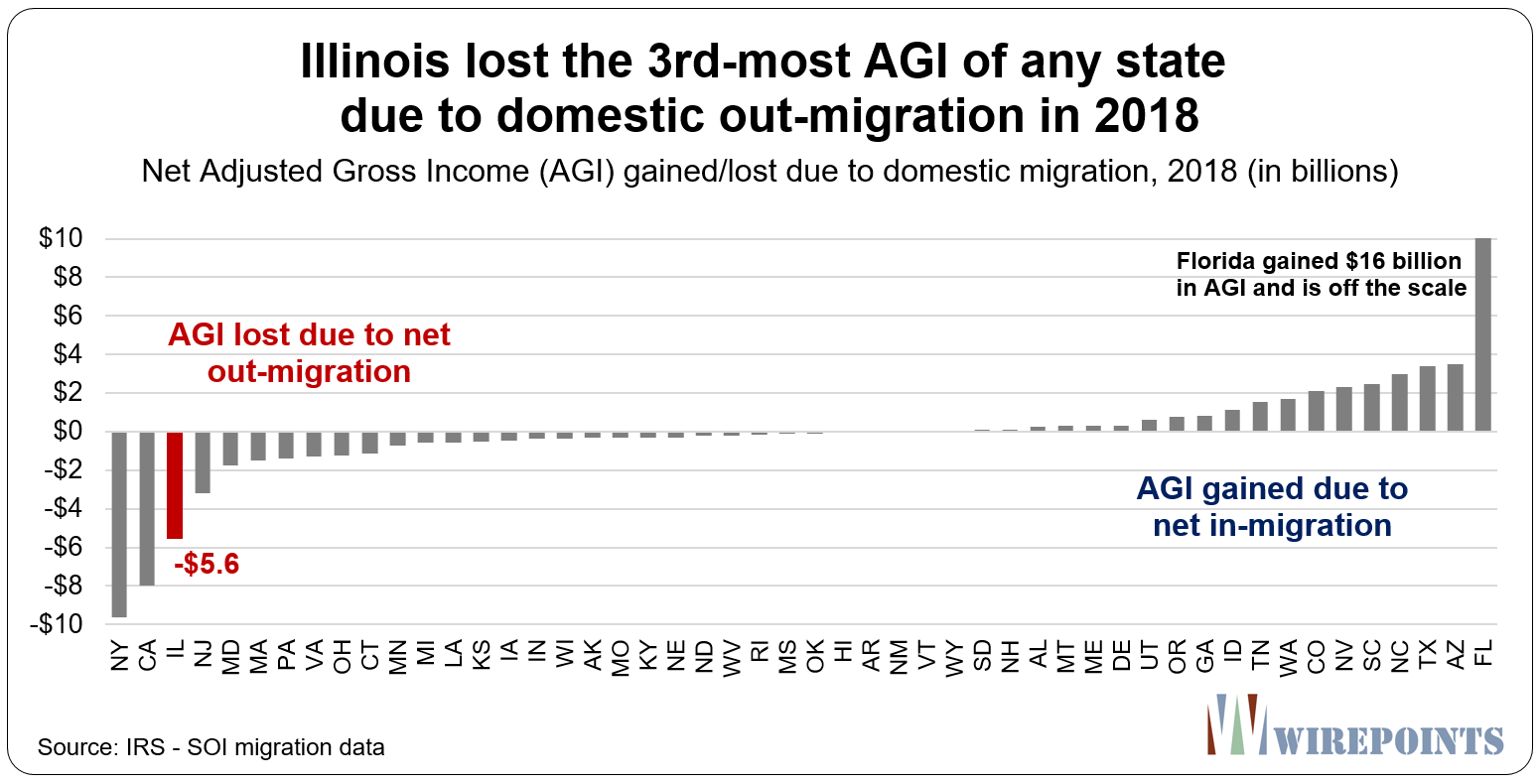 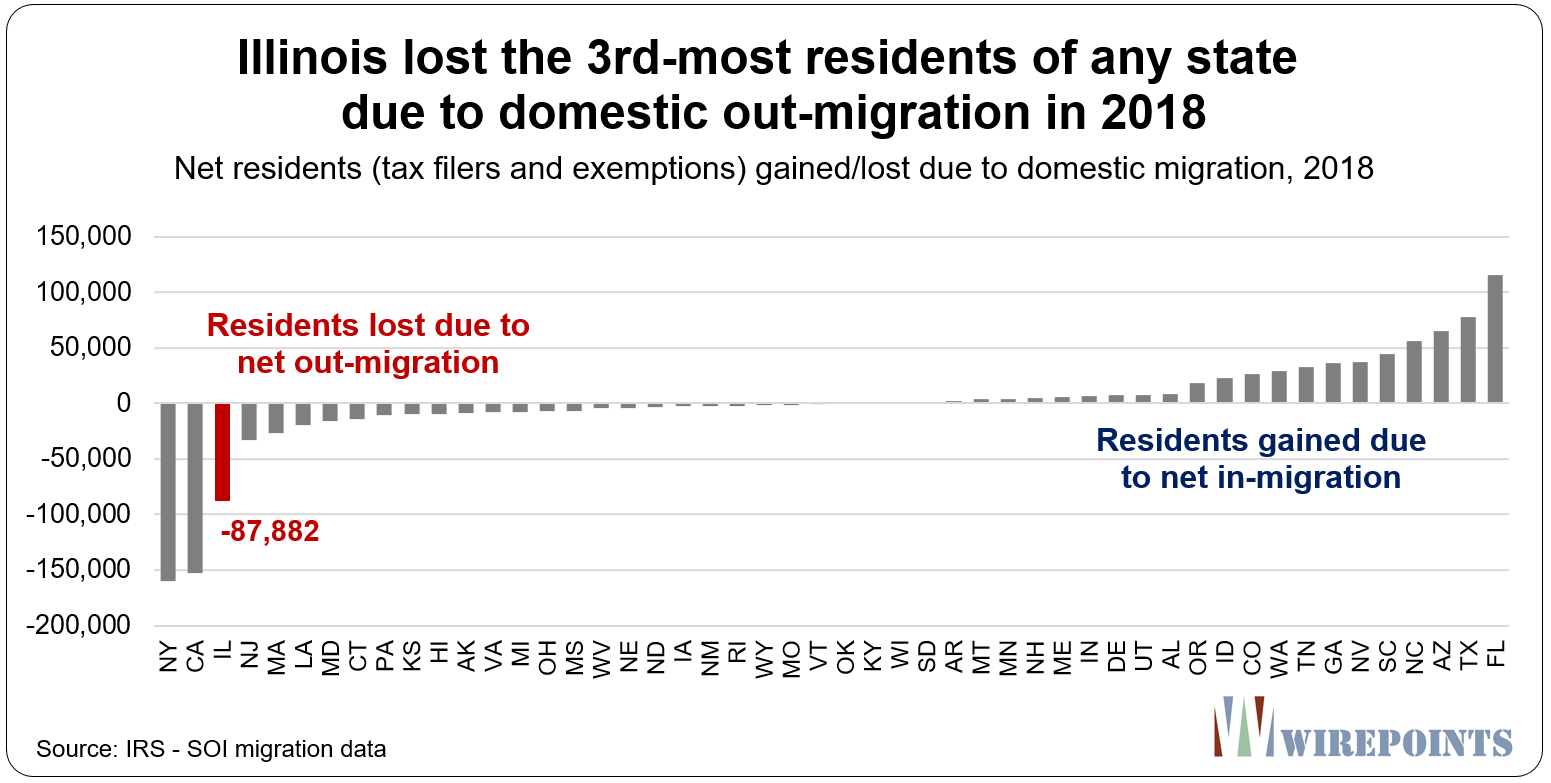 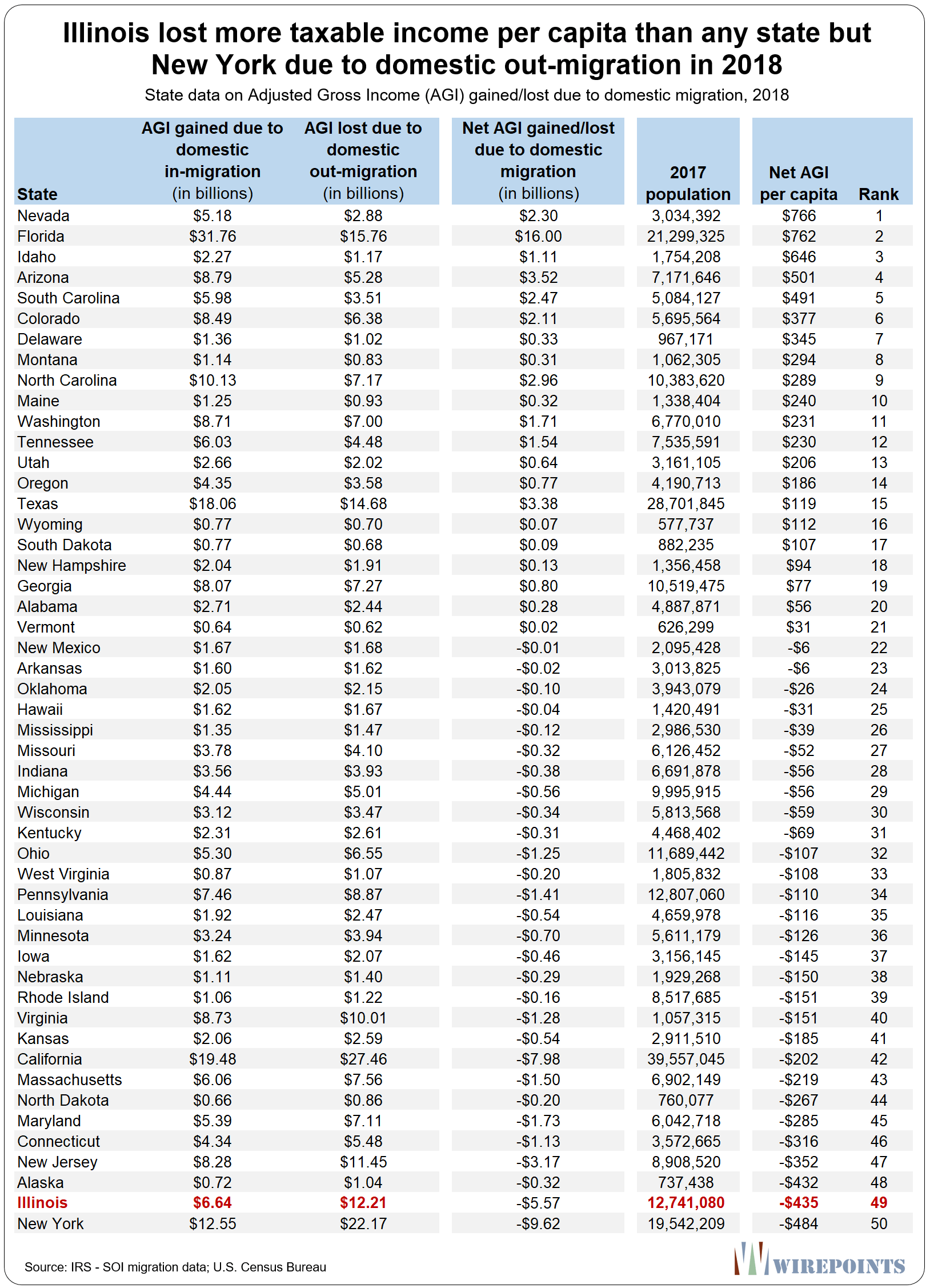 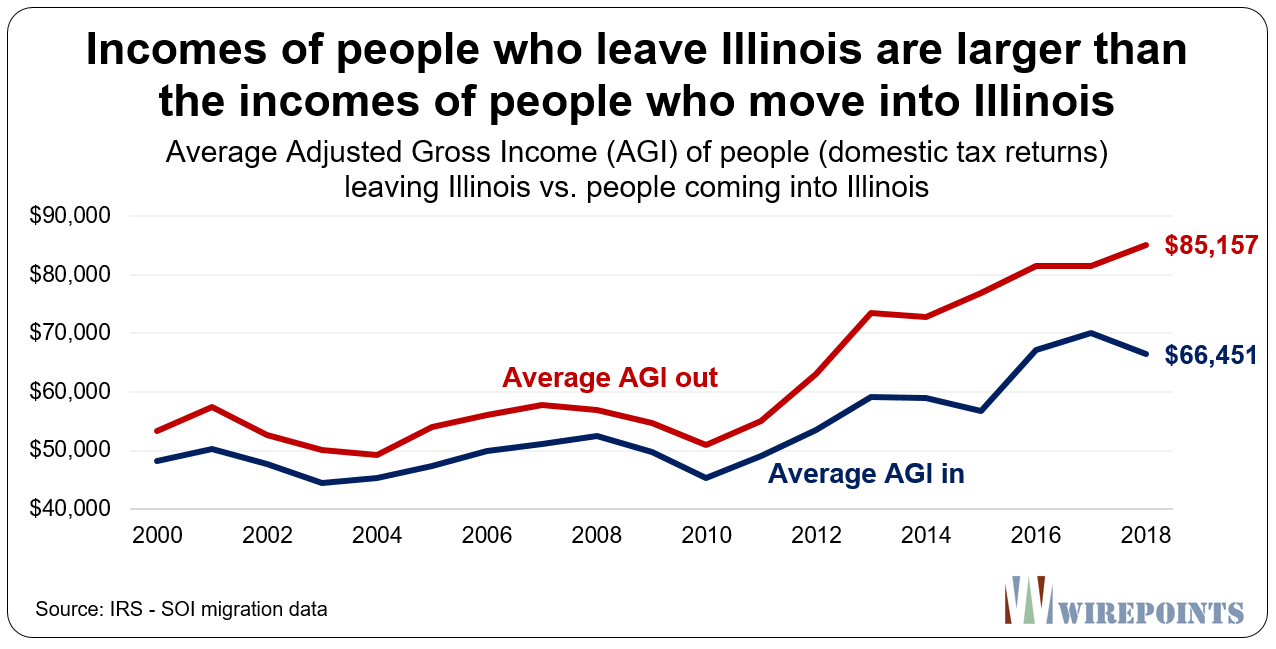 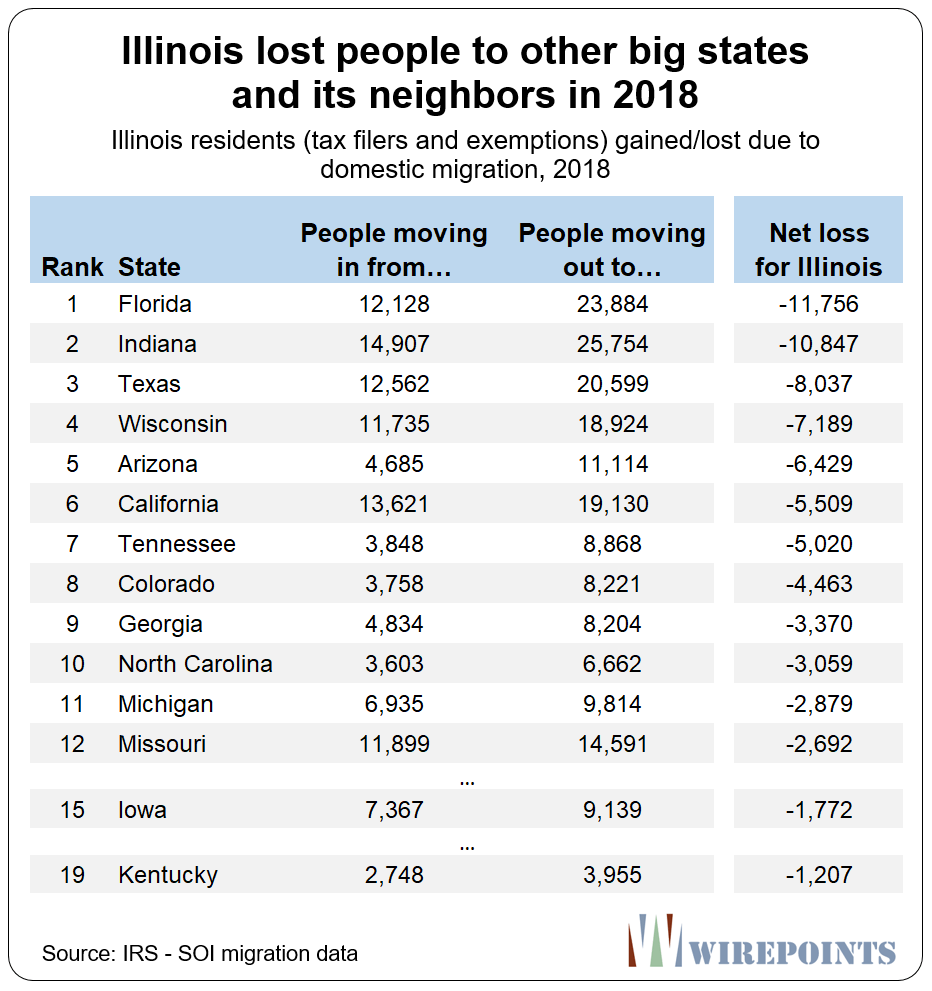 Any way the data is sliced, Illinois is chronically losing its population and its tax base. It is a national outlier along with New York, New Jersey and Connecticut. For full information on Illinois’ demographic and out-migration losses, see Wirepoints: Out-migration.

The outflow is particularly alarming given the state’s pension shortfall, which is already the highest in the nation. As the state’s population and tax base continue to shrink, the risk of insolvency for the state continues to rise.

And more tax hikes will only exacerbate the situation – Illinoisans already face the highest total tax burden in the nation, according to Kiplinger and Wallethub.

Illinois’ legislature shows no signs of pursuing the spending and pension reforms needed to make Illinois competitive again. Until that changes, expect the Illinois exodus to only get worse.

*This new data set comes after the IRS did not release data for two years. Included in the current release was two years’ worth of data – for 2017 and 2018. The 2017 data contains a significant spike in both gains and losses for most states. The IRS did not comment on why the 2017 data was significantly different from previous years.

**IRS and Census Bureau out-migration numbers differ because they are based on different methodologies. The IRS compiles national state-by-state migration data by reviewing federal tax returns annually to track when and where people move. The Census Bureau compiles a separate data set based on surveys it conducts across the nation.

Read more about the flight of Illinoisans:

If this so-called information is from IRS why do you need donations?

Jordan, we only have access to the data. We don’t actually get to spend the AGI from each tax return.

As a Registered Tax Return Preparer, authorized by IRS I have a hard time believing that IRS would put out any information regarding one state or even more than one state. Their information is not even available to their employees since they don’t collect information other than taxes collected and the type of taxes.

Jordan, here is the link to the state-by-state migration data from the IRS. It’s open to everyone. https://www.irs.gov/statistics/soi-tax-stats-migration-data

Jordan, try clicking the damn link to the data source in the article next time before smarting off, OK Mr. Tax Expert?

Only those with ordinary income. a lot of rich folk with capital gains can live virtually anywhere. The guy who runs Sears lives in Florida and does his conference calls from his living room.

Leave now, run as fast as the U Haul truck can take you.

The people moving in are on public aid and figure they uill get more from Illinoid that other states:-(

And the many homes sit as many can not afford to keep them due to what is still owed on the Loan, No Job because those Jobs went out of Illinois also, If you do not have income then you can not pay the loan or Elec. and other that one must pay for.

Saw a funny yesterday….picture of our Governor (I live in Illinois)…Pritzker. Sign above him read:
U-Haul Employee of the Month! People are getting out while the getting is good. But we now have legalized recreational marijuana, so we should get some good people moving in for that! (I do wish there was a sarcasm font.)

UHAUL just rented a empty K-Mart building, that has set empty for 8 years. and there is I would guess at least 100 units are ready to Rent.

Must be the one at Kmart on E. State in Rockford or the one on Sandy Hollow. Transform Rockford is telling everyone that Rockford will be a top 25 in 2025. Not unless property tax’s are addressed and also crime. Most everything that is being built here in non taxable like Mercy Hospital/OSF/Swedes/ISC sportscore/schools/The Grove HUD development/etc. Very little in housing and even that a few years ago there was an incentive of getting 80% refund for property tax’s for 3 years if you live there for that period. My rental is 2 blocks away and did not get an… Read more »

My small trailer i use occasionally to haul odds and ends jumped $100.00.
Will that help?

Because the municipality doesn’t always collect the entire levy. Some owners in economically depressed areas just don’t pay real estate taxes. Tax buyers sometimes pay off the taxes instead hoping to some day get a tax lien against the property. But in some cases, there are no tax buyers because the property has no value, like a 2 bedroom shack in Roseland in Chicago with a $2,000 a year tax bill. Ultimately, no one is paying those property taxes – not the owner, not the tax buyers, not the mortgage company that walked away from the property. The municipality has… Read more »

-1
Bob out of here
Reply to  debtsor

Look at Ford Heights. Wirepoints did an article on it last year. Residents are not paying their property taxes because they know nobody is going to buy the tax lien to take possession of their property.

I’m aware of those extreme cases, but the taxes eventually get paid one way or another. Whether it is via a tax sale, or they add it on to the next year. I’m not suggesting that this doesn’t lead to a downward spiral, but just that the policies and statutes allow them to eventually get it. And, not to be overly technical, but these problems are due to people leaving these municipalities, not leaving Illinois. Yes, there might be a correlation, but the truth is that these are town-specific problems, not population specific. Splitting hairs, it may seem, but I… Read more »

Tax sales often bring no thing close to the tax owed so no, the tax is not eventually paid. I know for example some landlords that buy at the tax auction, rent the places, pay no taxes and when they lose the property for back taxes they can go to the auction and the property is sold to another landlord as the cycle continues. In many cases to property is wrecked by the tenants so it merely becomes another vacant building in need of being demolished.
Life in Illinois you know.

Illinois-If I am not mistaken people who walk away from properties or eventually that no one pays-the taxing body still collects the same tax’s from the year before and up to 5% more if they are in a PTELL county as long as there is a value attached even if the home is worthless but the land still has value. The tax rate goes up to compensate for all the no pays. This holds true for anyone or business that gets an abatement or tax break including any deduction like homeowners or seniors. Tax rates are based on what was… Read more »