Illinois Republicans are right to oppose the progressive tax hike pending in the General Assembly. Some of them, however, are offering a new argument that’s as misguided as any rationale of the Democrats who support it. They are perpetuating two pernicious myths at the core of Illinois’ fiscal crisis. By doing so, they are displaying precisely why they have been part of the problem.

Republicans’ new, central argument against the tax increase is simple: We don’t need it to balance the budget, thanks primarily to unexpectedly high revenue, particularly in April when receipts came in about $1.5 billion higher than expected.

That argument is being spearheaded by House Minority Leader Jim Durkin and repeated by many Illinois Republicans. “For the first time in years, we are here to report great news for Illinois taxpayers,” Durkin said at a press conference last week. “We have the money to balance the budget without new taxes,” he repeated emphatically several times.

No, Mr. Durkin, you do not have the money to balance the budget. You will be short by roughly $10 billion – almost 25% of the budget – primarily because you’re ignoring the billions in additional pension and healthcare contributions needed annually to stabilize those systems (See Exhibits 1 and 2).

It’s only under the obscenely dishonest way governments do budgets that Durkin and Democrats can claim their budget proposals are balanced. They count borrowed money as if it’s revenue. They pretend money raided from funds segregated for specific purposes are income. Most importantly, they disregard major bills that are incurred and left unpaid, including the big one in Illinois – unfunded pension and retiree health insurance liabilities.

In other words, government budgets are nothing more than temporary cash expectations that tell us nothing about how the state is plummeting into ever deeper insolvency, even while budgets are “balanced.” 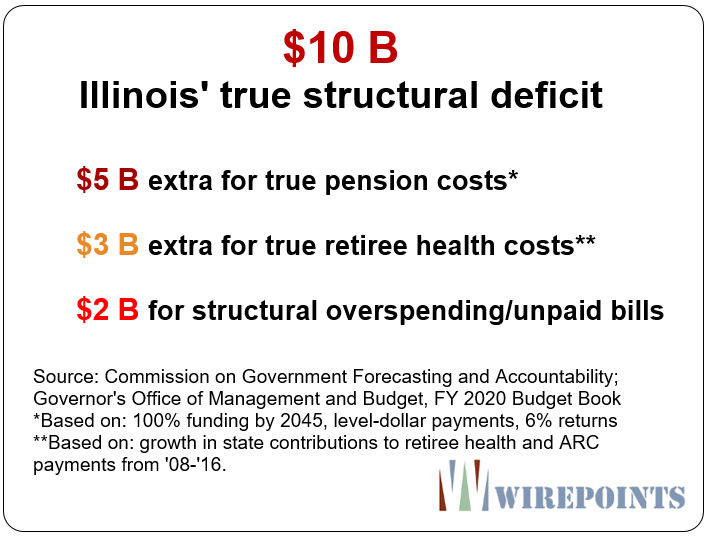 To see why, look no further than the actual, audited financial statements for the state. For the last ten years where we have those reports, Illinois’ change in net position – basically, its net income – was, on average, a negative $10 billion per year. Yet budgets were supposedly balanced in each of those ten years. That’s over a quarter of the current budget. In truth, the budget hasn’t been balanced since 2001.

Even using the usual phony standards, Durkin’s budget still requires tricks. It counts as revenue $550 million raided from segregated funds. It also apparently counts large savings from the pension buyout program which have been vastly exaggerated. Actual savings will be minimal. Take out the gimmicks and Durkin’s budget would be at least $10 billion short.

Also, the windfall April revenue on that inspired Durkin’s proposal might have been a fluke. Illinois’ Commission on Government Forecasting and Accountability emphasized that when it made the revenue announcement. Many other states had the same surprise, being attributed at least in part to one-time causes.

The second unstated myth perpetuated by Durkin’s new case against a progressive tax is that reforms aren’t needed to end our fiscal crisis. Nowhere in his press conference did he mention the need for even one reform. Just use the unexpected revenue to balance the budget and we’re done – that’s the seeming implication.

Wrong. Only a long list of drastic reforms like those we’ve advocated at Wirepoints stand a chance of restoring confidence, stabilizing the budget and eliminating its true deficits. That list includes the big one – a state constitutional amendment to permit real pension reform. Reforms are essential for restoring confidence. Ignore them and the flight of employers and taxpayers will accelerate.

We fully recognize there’s no political will at this time to enact real structural reforms. It’s important, however, to lay the groundwork in anticipation of the fiscal reality that will make them unavoidable. Spinning easy solutions undermines that groundwork by misleading the public and maintaining political complacence, thereby delaying the day of reckoning.

None of above excuses the actions of Illinois’ Democrats. They, too, are pitching a budget solution based on the same phony standards. A tax increase with no reforms is all they want, which is just what they got in 2017. But the Republicans pitching their one-page budget are doing what too many of them have always done – using duct tape on a bursting dam. Our insolvency only deepens as both sides brag about balanced budgets.

Instead, progressive tax opponents should be sticking to the arguments they made earlier with which we agree: New revenue from a progressive tax will solve little and will eventually evaporate as more of the tax base flees. The constitutional amendment needed for the tax is a blank check that lawmakers inevitably will use to raise taxes on the middle class. Only drastic reforms addressing our underlying problems will restore confidence and establish the pace of economic growth that’s essential for stabilizing the state.

Historians will put most of the blame for Illinois’ collapse on Democrats, but many Republicans will get their share. Count their new budget proposal as evidence. 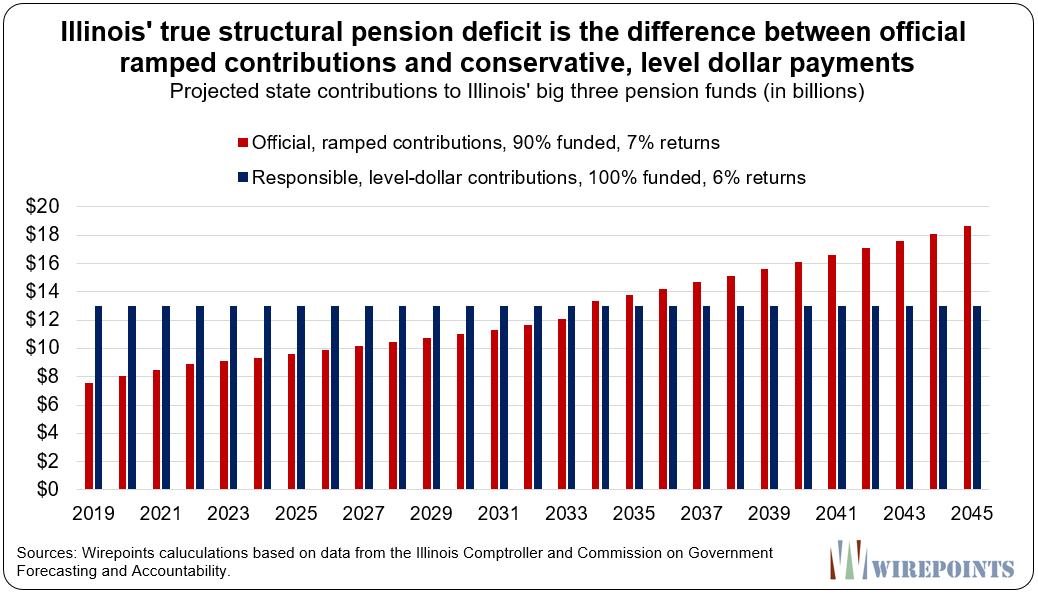 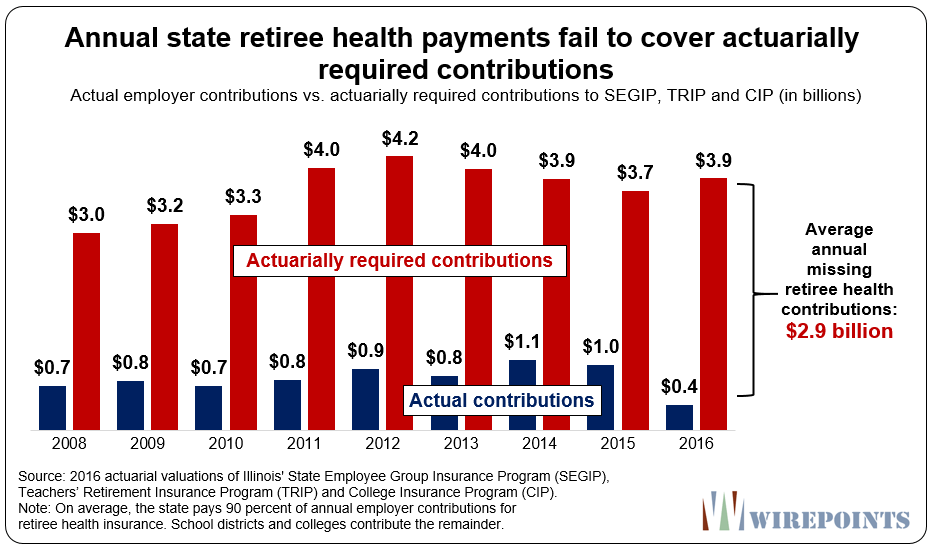 State GOP’s dysfunction, once again results in a disorganized, weak push-back vs pernicious graduated tax. The obvious response should be a coordinated campaign to blame public pensions, and submit “companion” legislation to put another amendment on the ballot: Eliminate Constitutional Protection Of Public Worker Pensions. Why should 80% of working Illinoisans work harder every year so that 20% can have guaranteed pensions that no private sector worker can have??? Link the tax effort to ONE problem: public sector pensions. Make Dem pols explain why it’s so vital that an un-fire-able bureaucrat should get a guaranteed pension which is the reason… Read more »

You clearly don’t understand the logic and arguments that caused the “Pension Clause” to be inserted into the 1970 IL Constitution. Get educated about that background, and you’ll answer your own question. While it was meant to help correct the underfunding problems of many prior decades successive governmental leaders meantime simply ignored it.

I think you are correct in part given the fact that, before the late 60s, public pensions had been viewed by some courts as gratuities that didn’t have to be pre-funded. However it’s the courts (not all courts) that have expanded the interpretation to provide, in substance, that pension accruals could not be diminished for “future service.” In other words, if a public employee had served for ten years and earned a benefit defined as $X per month per year of service, that monthly benefit would be protected. However (as clearly true in the private sector) the employee need not… Read more »

You are right. We’ll update. They are Wirepoints calculations using COGFA and Comptroller data.

I sat out the last election for 2 reasons. First, I had already made plans to leave Illinois. Second, in Illinois, your voting choices are the liberal party and the slightly less liberal party. Why bother?

Show up this time to cast one vote: NO on the constitutional amendment. If voters like you sit out, we’re screwed.

You already are screwed.
Leave Illinois.
Or be ruined

Sorry nixit, I’ve already left Illinois. But you’re right about one thing. You are screwed because too many like me have given up on Illinois. Maybe you should too. Good luck with the vote.