Add the Illinois Municipal Retirement Fund to the free-for-all grab on state money flowing to Illinois’ troubled towns and cities that’s now setting up. That money recently became subject to intercept by the state comptroller who then redirects the money to pensions. Based on data we obtained earlier under the Freedom of Information Act, over 600 Illinois towns and cities were underfunded on their IMRF obligations, at least to some extent, apparently putting them at risk of at least a partial intercept.

The unfortunate City of Harvey is again providing the illustration, but it’s not likely to be the last.

Harvey was the first to first to face that intercept and a court fight ensued between the city, bondholders, the police pension and the firefighters’ pension. Each wanted at least some of the state money. That money, which includes local share of sales tax and income tax, is often critical to providing essential services. Harvey initially responded by laying off about half of its firefighters.

A global settlement was reached among the claimants and the City of Harvey. As reported by The Bond Buyer yesterday, that settlement includes the city’s obligation to keep IMRF current.

Importantly, that requirement was included because the comptroller concluded that IMRF has intercept rights, just like the police and fire pensions, according to The Bond Buyer.

The implications are extensive because IMRF is huge and so many municipalities are delinquent on their obligations to it. It’s the second biggest Illinois pension by membership, covering over 400,000 municipal employees (other than teachers, police and firefighters) across the state other than those of Chicago and Cook County.

Each of the municipalities that participate as employers in IMRF has a separate account, of sorts, with it.

IMRF’s aggregate funding ratio is comparatively healthy, most recently reported at 93% (thanks to its unique rights to force funding in other ways).

However, that aggregate belies the reality that the vast majority of towns and cities have been underfunded in the accounts they maintain with IMRF for active workers. Retired workers, as IMRF accounts for things, are fully funded, but municipalities are often short on their obligation to fund their IMRF account for active workers.

The numbers we obtained are below and are from 2016, the most recent we could get. Note that these funding levels are for active workers only, and for towns and cities only (not other types of municipalities that also participate with IMRF). 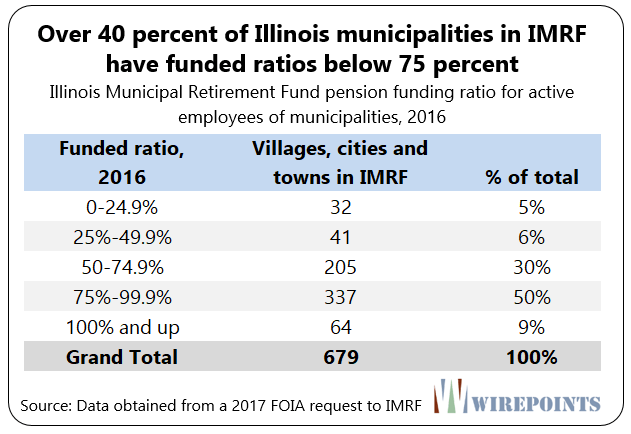 615 towns and cities are underfunded to some degree.  278 have funding levels under 75% for active workers.

IMRF trustees, like local police and fire pension trustees, are no doubt thinking hard about whether their fiduciary duty to the pension requires them to request an intercept. Once a pension validly requests and intercept, the comptroller is legally obligated to effectuate it. The comptroller earlier indicated that first-to-ask wins in cases where multiple multiple pensions seek intercepts but there’s not enough to cover each.

Obviously, this is an awful mess.  Pensioners, bondholders, taxpayers and service recipients face a free-for-all in fiscally troubled communities across Illinois. It’s a fight over some of the last meat on the bones.

We called IMRF for comment or elaboration but have not heard back.

For further background on the intercept and Harvey’s plight, see these earlier articles:

Special Report – Beyond Harvey: Many Illinois municipalities running out of options

“Nobody is winning; everybody is losing” Wirepoints testifies before the House Committee on Cities and Villages

IMRF and the pension boards should act quickly and begin the intercepts. The quicker this happens and the more that cities are forced to cut services, the faster voters will understand the true nature of current State of the State. I find it unreal that I live in an affluent area where people have no idea what is really going on. When I try to give them the elevator pitch, they look so lost and quickly try and discredit the facts that I just mentioned. I love to send them the link to this website so that they can begin… Read more »

IMRF can’t pay for that 13th payment if all the other funds are getting their grubby hands on those tax dollars first.

I wonder if IMRF still offers that Voluntary Additional Contribution “savings account” that guarantees 7.5% interest? Lord knows how they cover that interest, unless they’re lumping it in with the pension funds.

They still offer that obscene guarantied rate savings account as far as I know. We wrote about it here: https://wirepoints.org/get-7-5-on-a-savings-account-here-guaranteed-sorry-imrf-members-only-wp-original/

When will the taxpayers get involved? There has been a TAXPAYERS MONEY INTERCEPT going on for decades. The money from the many goes to the few. When did taxpayers ever vote to give lifetime pensions and healthcare to public employees while sacrificing our retirements? I do not recall seeing that on any ballot or referendum. Taxpayers should be FIRST in line to get their taxes back with interest (compounded of course) !!!!

Agreed 100% but many politicians run unopposed (approx 65%) so the ballot has one name with no write in candidate space in many cases. Also thru redistricting or gerrymandering politicians draw boundary maps that all but guarantee them winning and IF your candidate wins the “Party” can ask them to step down or aside so they can put in who they want. Madigan (speaker of the house) is voted in by only the 13th district not statewide. If that were the case we could have reforms. So it is very very hard to vote out the lifer politicians. Thanks and… Read more »

Taxpayers are a commodity, collateral to be traded on the bond market at great return to institutional investors profit. Moodys sees to it that Illinois doesn’t go to junk rated so this slave market can keep going. Our labor is the only collateral left, the state is a negative. Essentially we are slaves now.

Great work. My eyes are open and I’m learning a lot. I’m also actively sharing your information and people are beginning to educate themselves. Thank you.