Harvey was the first domino to fall in Illinois’ public safety pension crisis. Now North Chicago, a city of 30,000 on the North Shore, is the second.

State Comptroller Spokesman Abdon Pallasch confirmed to Wirepoints that the comptroller’s office “…received the certification of delinquency in the amount of $863,677 from North Chicago Firefighters Pension Fund on April 9, 2018…As of April 18, 2018, we had withheld a total of $338,642.87.”

In Harvey, the intercept of nearly $1.5 million by the comptroller led to the layoff of 40 public safety workers so the city could avoid insolvency.  For now, the courts have put a temporary hold on the intercept.

North Chicago and Harvey public safety pensions are some of the worst funded in the state. North Chicago’s police and fire pension plans have just a third of the money they need on hand today to ensure they can pay out future benefits. Harvey’s police and fire funds are just 49 percent and 20 percent funded, respectively. Both cities owe more than $60 million in unfunded pension debts.

Harvey, and now North Chicago, are the vanguard of a much wider problem faced by cities across Illinois.

A recent Wirepoints report found that garnishments may wreak havoc on hundreds of Illinois communities, bringing their long-running financial crises to a head. In total, 368 of Illinois’ 651 public safety pension funds were shorted their full payments in 2016, according to the only statewide data available from the Illinois Department of Insurance.

In all, that means more than 200 municipalities could have their tax revenues garnished along with Harvey and North Chicago.

We’ve already written about why this situation is a big problem for Illinois’ political class.

If lawmakers allow garnishments to continue, a wave of pension funds could demand that the state intercept their city’s revenues. That could lead to cash crunches in struggling municipalities and result in pay cuts and layoffs for public sector union workers across the state.

And the comptroller’s interceptions will make lawmakers look bad. By garnishing city revenues, Illinois politicians will overtly protect and prioritize public pensions over social services and health care in the state’s worst-off communities. The residents of de-facto bankrupt Harvey and North Chicago will only be the first to suffer the loss of already-limited services.

On the other hand, if lawmakers reverse the garnishment law via legislation, they’ll reveal their unwillingness to defend public sector pensions.

Now that North Chicago and Harvey have fallen, the big question is which domino is next? East St. Louis? Lynwood? Riverdale? 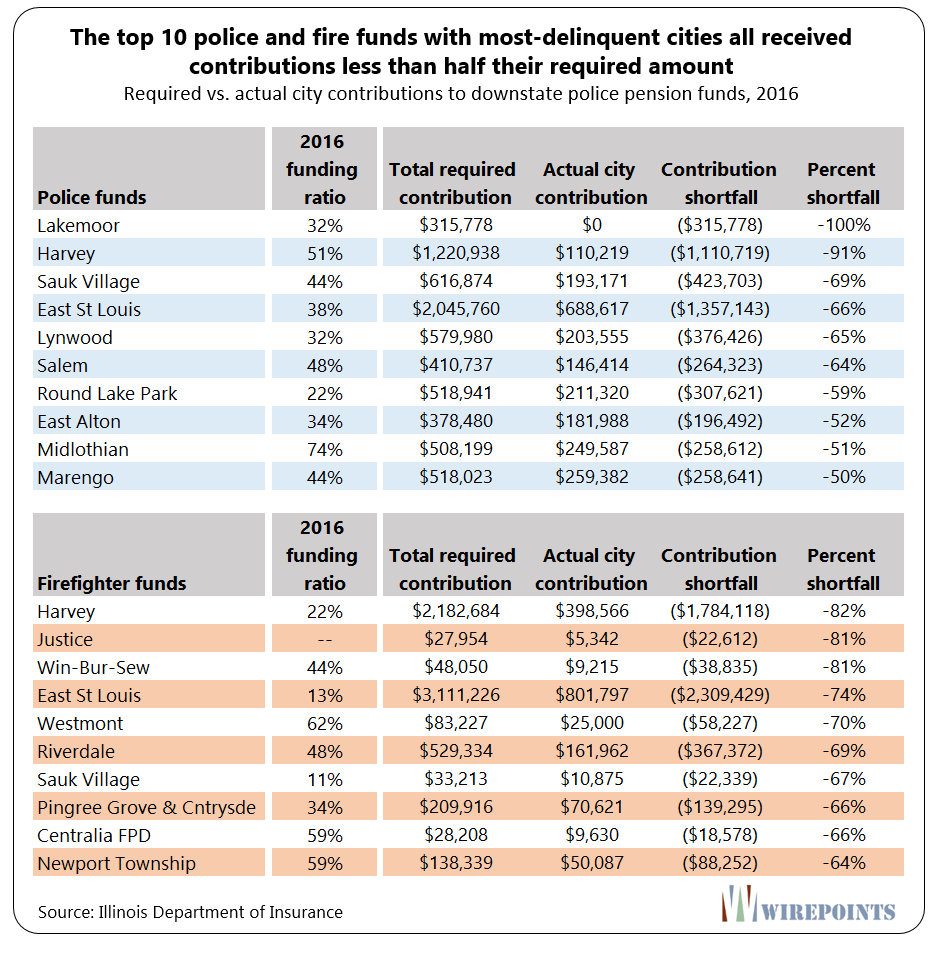 I honestly believe that some residents will burn their homes in the middle of the night and leave the State in the morning.

Chicago qualifies to be garnished as well, no? Or are they “special”.

Just leave. Seriously. If those with the means move out of IL, what is left? A bunch of welfare tarts (that includes all public sector workers) taxing each other. It is a fitting fate.

The best, most just thing that could happen is economic calamity.

Of course the contagion is springing up all over. Retirees in Loyalton, CA and the East San Gabriel “LA Works” have lost part of their pensions. The idea of “shared risk” has shown to be false.

RE: the August 2017 article at the link. “State Must Act.” What has the State done since then? What can it do? Politicians promised more than they could deliver. Nothing new about that. Ask military veterans about their medical care at the VA. Ask Teamster bosses about the drivers’ pensions. Ask Studebaker employees from the 50’s. Lucretius said: “Nothing can be made from nothing—once we see that’s so, Already we are on the way to what we want to know.” King Lear said “Nothing will come of nothing.” Fats Domino sang “What you gonna do when the well runs dry?”… Read more »

So they are whining because a none government entity had it pension cut when it was dissolved like has happened to untold numbers of workers in the private sector. It sounds as if they wanted to be insulated from private sector reality by claiming they were part of the protected class of govies. So too wish every private sector employee who saw promised private pensions vanish.

Another solution is for towns to short other pensions instead of emergency support. Rob Peter to pay Paul, but avoid garnishment.

Oh boy none of this is good for the progressive mindset. The towns that will be garnished first will be the heavy working, welfare and minority class towns. The “rich” will be left alone, Illinois leftist government will have to, by law, cannibalize the very constituency that put them in office. Do other pension funds have the power to garnish, or.is it only emergency workers?

The taxpayers of Harvey and North Chicago should refuse to pay county taxes until the state constitution is amended. What would the county and/or state do — incarcerate and/or take ownership of thousands of properties? Valuations would PLUMMET overnight, exasperating the untenable situation even more.

THIS is EXACTLY what is needed. Force the hand of the liberal utopia of Illinois.

But don’t worry – the elected officials will continue to get paid and receive their benefits.

If lawmakers allow garnishments to continue, a wave of pension funds could demand that the state intercept their city’s revenues. That could lead to cash crunches in struggling municipalities and result in pay cuts and layoffs for public sector union workers across the state.
I think we have found the silver bullet solution to the public pension scam. Let the dominoes FALL. Then let the muni reset the level of salary, benefits and overall compensation to a market level.

Yeah but Bankruptcy is needed so that Pensions take their cut along with other unsecured creditors.

I bet the IL Supreme Court rules that essential services like police and fire cannot be reduced.

Have we no National Guard?

would you leave your job to put on your camo to patrol the streets or put out fires in Harvey or North Chicago?

Median home price is about 35K now in Harvey. Just let them burn and issue checks for 35K(source Truila); much cheaper than the fire department salaries.

Ultimately the sheriff police are responsible, so no need for additional police.

January 17, 2021
Mark was on the Steve Cortes Show this week talking about Mike Madigan's historic fall from power, the continued destruction wrought by the state's overly-restrictive COVID lockdowns, and the potential size and impact of Biden's stimulus plan.
View Comments | Add Comment