Leaving Illinois: How simple math chased away a village mayor and his family

If there was one guy you’d think wouldn’t succumb to the pressures of living in Illinois, it’s Lakewood Mayor Paul Serwatka.

He’s a reformer and a fighter. In the past year he’s succeeded where most politicians refuse to go. He lowered the Village of Lakewood’s property taxes by 10 percent and eliminated a TIF district, going against the trend of higher spending and bigger tax bills in communities across the state. And he did all that without cutting services. He was showing Illinoisans what reform-oriented leadership could look like.

But every family that’s chosen to flee Illinois in recent years hit a breaking point and Serwatka finally hit his. For him, it was the risk he wouldn’t be able to care financially for his growing family. 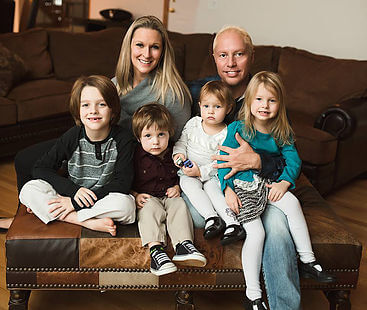 You can’t blame him and those families that have already left. For many, it’s become too expensive to live in Illinois. For others, good-paying working class and manufacturing jobs have disappeared. And for yet others, they’re tired of being taken for granted and mistreated by their politicians.

At the core of the decision for many families to leave is the burden of higher property taxes. They’ve become punitive in too many parts of the state, as Wirepoints has covered in detail.

That’s true even in Lakewood, a city of nearly 5,000 people located in McHenry County. Residents in that county pay some of the state’s – and the nation’s – highest effective tax rates, measured as a percentage of household incomes.

Serwatka has four young children to think about – ages 3 to 8 – and he did the basic math that many Illinois families are doing in their kitchens or family rooms. They’re comparing what their property taxes are in Illinois to what they could be in other states – and what they could do with all the money they save.

For Serwatka, his comparison city was Decatur, Alabama.

There his family found 10 acres and a house that’s 25 percent bigger than their current Illinois home, all at roughly the same cost. The Alabama house also has access to a private lake shared by some 60 homeowners. And his home in Decatur is only 20 miles from Huntsville, which is booming in all kinds of ways.

If Serwatka saves that $13,000 difference every year and invests it at 6 percent annually for the next 20 years, he’ll have accumulated savings of more than $600,000 dollars. 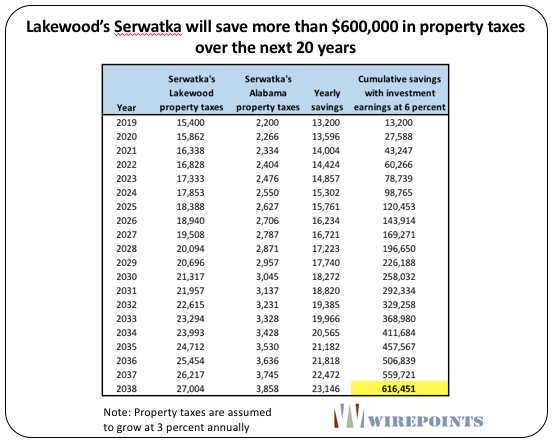 Sadly, Illinois politicians continue to push property tax rates to record levels. They are the highest in the nation, double the rate in Missouri and three times higher than those in Indiana. 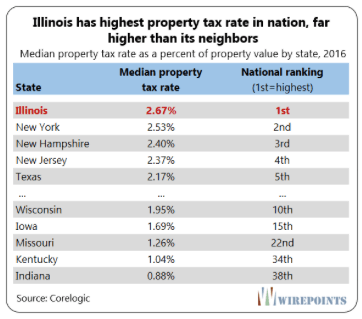 Serwatka is confident he’s delivered on the promises he made when he took office. Residents who were looking for reforms, lower taxes and more respect from their politicians got exactly that from him  .

But in the end, the savings he produced as the mayor of a small town weren’t enough to offset the tax increases coming from the school district and the other myriad of local governments, not to mention the state itself.

Those taxes are now so high they’re chasing out even the reformers – those bold enough to buck the system in Illinois.

The reality is, Illinois’ failed policies discriminate against no one. People are being forced to do what’s best for their families. And if that means leaving, they’re doing it.

A very limited, yet concise answer is to, for a start: 1) Always Vote, 2) Tend to vote Republican after researching the issues and verifying the candidates you are voting for and 3) Be involved, if not contact, with your local, state and national legislatures.

We used to live on Nicklaus Lane, in Lakewood and paid over $22k a year 13 years ago. We now live in Gilbert, AZ (same size and valued house) and pay $4.2k…Best thing we ever did.

i moved to wisconsin from illinois six years ago

should have done it TEN years ago

no sales tax on groceries

my property taxes havent gone up $100 in 6 years

the people up here are definitely nicer

its a no brainer

The article makes valid points, but it would be more persuasive if Mr. Sarwatka shared something about how he makes his living, and how his income is likely to change (or not) with the move. From Lakewood he’s within an hour’s drive of hundreds of thousands of jobs, some good-paying, and just 2 or 3 miles from Metra trains to downtown Chicago. This might or might not be important to him, depending on his profession.

I’m not sure it would make it more persuasive. It could be that some families are willing to take the risk of leaving Illinois even without firm jobs lined up. After all, job growth is very high in the South and Illinois is lagging the rest of the nation in job creation, in particular working-class, middle-income jobs. So the bigger risk, for some, might be staying in Illinois, knowing that the job and political climate may be even more risky. And for sure – absent major reforms – the tax bill will go up. That said, he will be 20 miles outside… Read more »

Yes, that must be it. We pay these grotesque tax rates to gain access to the booming economy of Chicago and the “hundreds of thousands” of jobs needing to be filled. Also, the incredible public educations provided to our children and the children of our many, many sanctuary state residents… Keep posting that garbage so the sheep will keep voting democrat. It was TAR and FEATHER TIME years ago in Illinois and anyone attempting to justify these rates of taxation must be one of the parasitic public employees/teachers and/or some other member of the master class in Illinois or the… Read more »

Way to go Paul. Any county would love to have you as a mayor or city manager. You learned you can’t save a failed state. We left California 30 years ago for same reasons you left Illinois. The crash for Illiois is coming soon. Glad you and your family left in time!

If you mean “following”, then the comment still makes no sense. Has nothing to do with following or copying.

He also tried to illegally “remove” two trustees from office.

Illegally? Really?? For a guy who purports to be a good government advocate, you sure go out of your way to promote and protect the corrupt, John.

I am one who was a believer in the Dogs and Dombrowski. Only real numbers will reveal the truth and then those “real” numbers will be suspect like the DIXON coverups. Where, oh where is truth?

Alabama has a progressive state income tax structure but their effective tax rate is basically equal to Illinois’ flat income tax rate. Another reminder that progressive rates don’t have to mean higher taxes. Someone tell JB.

Alabama’s bend points between tax rates are so low, the income tax rate is almost a flat 5%, meaning therefore just about exactly equal to that of IL.
The article focuses on prop taxes anyway, which are drastically / game-changing LOWER in AL.

Democrats and willing Republicans (most) have reinvented the plantation they loved and fought for in the Civil War, complete with chattle housing and sharecropping. The local ministries of propaganda –the schools– drive the plantation situation and make Big Massa Madigan the boss over and over and over again with their dues and support. Illinois is a Zombe state.

March 27, 2020
ProPublica was right to ask for hospitalization numbers, and so were we.
View Comments (13) | Add Comment

March 27, 2020
The Illinois Municipal League is angry, as they should be, about federal bailout money for Chicago as the only Illinois town or city to get federal aid.
View Comments (2) | Add Comment

March 27, 2020
The Coronavirus is a terrible crisis that threatens everyone, but the silver lining for many will be the clarity that only structural solutions can fix Illinois’ problems.
View Comments (11) | Add Comment

March 27, 2020
We need daily hospitalization numbers and we need them now, on both people currently in hospitals and those who have been released. There’s no excuse for not having them.
View Comments (18) | Add Comment

March 26, 2020
A revenue loss of $8 billion is a reasonable scenario – about 20% of the state budget – though it likely would be spread over several years.
View Comments (18) | Add Comment