Illinois household incomes have struggled to keep pace with inflation over the last three decades. In fact, incomes in 40 of the 50 largest Illinois cities are down compared to 1990 once inflation is taken into account. From Normal to Rockford to Waukegan – and even well-to-do Schaumburg – all have experienced income growth lower than the 2.4 percent yearly inflation average since 1990.

Household incomes have been hit by the nation’s highest property taxes, a struggling economy and a weak job market. But now gubernatorial candidates Daniel Biss, Chris Kennedy and JB Pritzker want to hit Illinoisans with another tax hike – most of which will go to pensions.

That wouldn’t be fair, given new research just released by Wirepoints. Residents in cities across Illinois should know what they’re paying for.

Total pension benefits are overwhelming the state and the ordinary Illinoisans’ ability to pay for them. 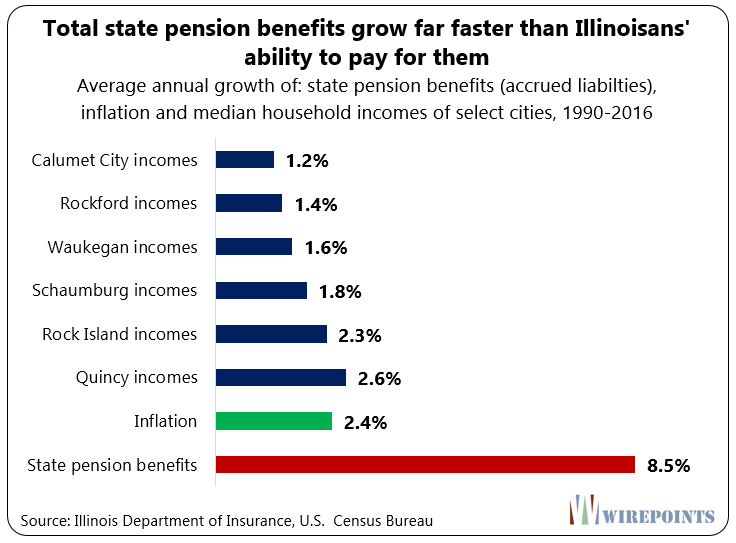 Even compared to Plainfield, which had the highest annual household income growth of Illinois’ largest 50 cities outside Chicago,  pension benefits owed to state workers still grew 2.25 times faster than the city’s incomes.

When measured over the whole period of 1990-2016, pension benefits grew 736 percent while household incomes in Plainfield grew just 167 percent.

The impact on residents in cities with slower income growth is even more dramatic. Residents in cities like Rockford and Danville have seen their incomes lose ground to inflation. Inflation is up 84 percent over the entire period, while household incomes there have grown less than 50 percent. 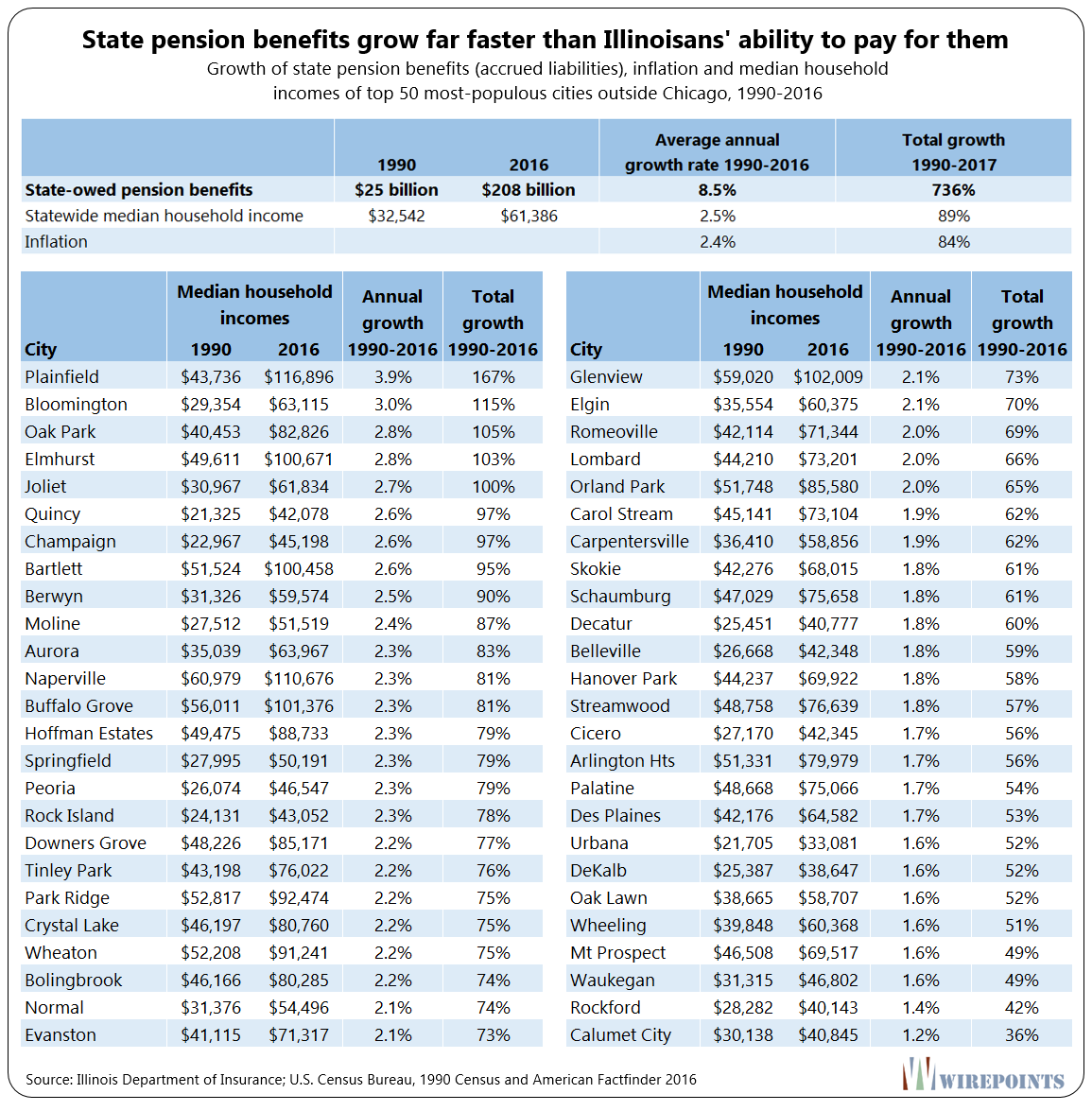 Illinoisans are losing out everywhere they turn.

Their incomes are are stagnant. They’ve just been hit with a record $5 billion dollar income tax hike. They have to pay the nation’s’ highest property taxes.

And they’re losing access to state services as pensions eat up more and more of their tax dollars. Most new state tax dollars have gone to pay for rising pension costs instead of services. Pension costs now consume more than 25 percent of the state’s budget and will do so for the next 25 years according to Illinois’ Commission on Government Forecasting and Accountability. 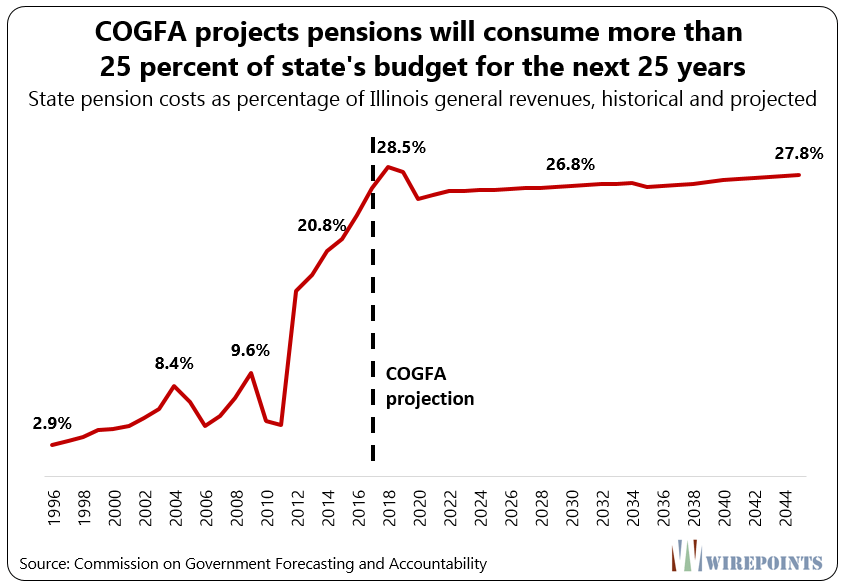 That’s why the current narrative surrounding the pension crisis should infuriate Illinoisans.

The state’s political elite have the gall to say underfunding is the cause of the crisis. That implies that taxpayers haven’t put enough money in.

But underfunding hasn’t been the issue. Instead, it’s the dramatic growth in total pension benefits promised by politicians that’s been bankrupting Illinois.

Illinoisans have paid their fair share into pensions. They should reject any attempt for additional tax hikes.

Instead, Illinoisans should pressure their lawmakers to use every constitutional lever they can to reduce the growth in benefits they so foolishly or maliciously promised.

To Advocate: Wow, hope you’re not a current or retired English teacher ! Spelling isn’t your forte (benifits, conceeds, arguement, seperate, caball, etc). Take the State Teachers’ Retmt System: There are currently 160,000 ‘ees, making $10B/yr, the Accrued Liab at 7% discount rate is $123B, Assets are 50B……so the Unfunded Accd Liab is nearly $75B. Private sector residents in the state are being taxed to death, so let’s say the System should fix it themselves…..by coming up with the $7.5B/year contributions that the Actuary Segal recommends. That’s $3B more than currently budgeted……..SO how about layoffs and pay cuts of $3B… Read more »

My best bad idea Steve, one you dont accept because it tastes so bad, is pay the bill we made. Cut services that WE cannot afford. And utilize the very powerful element of TIME. The list can go on with other measures but this is my main bad choice. Pease dont reflex answer me its the Math. ……so many Mathematicians around here don’t wanna use time. Its inconvenient to thier argument, so they leave it out. “Slogans” like its the Math are designed, very much like the current spin to attempt to obfuscate central facts. A Simple Economic fact like… Read more »

Part of the trouble with your NEW spin that our pension problems are the result of over-promised benifits, rather than by underfunding, is that this position conceeds Pensions are a promise. Lets use simple logic. We KNOW the politicians are representatives of WE THE PEOPLE. We have a representative government and our politicians are simply an extension of We the people. So when you say politicians over promised benifits you are necessarily saying We the people over promised benfits. Even IF, and thats a big IF. But for the sake of arguement….. Even if We the people OVER promised pension… Read more »

Your theoretical and academic assertion is just that: theoretical and academic. The problem is that businesses and taxpayers are mobile. At some point the situation is unsustainable and there is nothing you can do to keep them here. That may infuriate you and your public union buddies, but the reality is that there has to be a mechanism to prevent this downward spiral — to the benefit of all parties.

It’s called bankruptcy, and you should get to know it, because some form of it is coming our way.

Please look at the serious studies that examine WHY people live where they live. Tax rates and policies are VERY low on the list. Workmans comp rates and union right to work laws…..not a significant factor at all. First off, very few people have the MEANS, to pick and choose where they live. Those few of us that have the financial ability to choose where we live, choose places where our families and are interests belong. Taxes are usually a secondary concern. The mass exudus WONT happen. Its a false narrative. It drives some. Otherwise Nobody would live where the… Read more »

If taxes are a secondary concern and a mass exodus won’t happen, then why doesn’t Illinois start taxing retirement income? Those retirees won’t abandon their cute grand kids, right? If workmans comp rates and union right to work laws are not a significant factor at all, then it can’t hurt to change them either. If RTW doesn’t impact mobility as you said, then RTW also won’t drive union workers out of the state. Same as it ever was. But your argument basically centers around the fact taxpayers are indentured servants of the state and, because of their limited mobility options,… Read more »

The Chicago Mafia running the City of Chicago, Cook County, and big influence on the State, are destroying peoples lives. Funny, but the people keep voting for these corrupt Democrats! It continues to get worse and worse. Mike “The Made Man” Madigan is destruction for taxpayers.

Nixit I agree with allot of what you say.

Take Red light Ticket cameras. If we arent sukers for putting up with those what are we?

Yes were taken advantage of in so many ways…..but sadly Nixit …..isnt it We the people who put those cameras up?

Isnt it of our own making?

Advocate – I can’t follow where you are going. Illinois has, according to Moody’s, a $250B pension hole, plus a $15B operating deficit, with a likelihood of that growing because the deficit will increase again this year notwithstanding tax increases. Only the top 5 percent of income earners – at most – can be taxed to even make a dent in the overall debt hole. The crisis won’t be solved off the backs of the people making 50k a year – they can barely afford to get by as it is right now. So how do you solve this problem… Read more »

Advocate: You are cherry-picking a data point–taxes. It’s all interrelated. Higher taxes can be acceptable in an environment where the monies are put to good use (infrastructure, education, parks, recreation), but the reality is that we know we are not getting better government for our money. We are getting higher pension liabilities, more graft, and more welfare. Citizens are smart, and they can see value. We know we’re not getting it, and that’s the point. With $250 billion in liabilities, why stay and pay for that when it gets us nothing? Finally, businesses are much more sensitive to taxation, regulation… Read more »

Advocate: I’m not sure where you get your information, but I’d be more selective if I were you. One thing you did not address is Illinois’s ridiculous and obscene property taxes. I for one, moved out of Illinois in large part, because if I had bought a home, there is a strong possibility of the home’s value going down over time. Everyone knows Illinois will NEVER BE ABLE TO PAY THOSE LOTTERY WINNING SIZED PENSIONS. Until Illinois is allowed to file bankruptcy, the taxes will go up, probably every year, or every other year. And its looking more and more… Read more »

Advocate – You’re arguing semantics. No amount of pleading the tired “promises are promises” argument changes the math. Promises that can’t be kept won’t be kept. Debts that can’t be paid won’t be paid. State bankruptcy and diminishment of state pensions is assured. Plan accordingly. Every day that goes by without a bankruptcy filing lowers the amount of money pensioners will receive. An enlightened move for you would be to “advocate” for the filing ASAP.

I will not advocate for Bankruptcy because it is not in our States interest, nor our nations interest to create easy bankruptcy for states to do one thing….circumvent pension debt. Bankruptcy would become the new tax policy throughout the land. We wouuld become a land of deadbeats. Can you imagine the next local board meeting, or state capital meeting, when two choices are at hand one raise taxes or two file bankruptcy? Bankruptcy will sweep throughout the land….county to county…..state to state…as the latest and greatest phase ….wiping old debts away like a magic wand. As if Bankruptcy was just… Read more »

Advocate – Do the math. Insolvency and bankruptcy are imminent. Wishing it away won’t make it go away. Delays in BK filing only deepen the pain to come. As for civil disorder, you’ll get plenty of that if taxes, particularly property taxes, are raised much more.

“We the People” are leaving Illinois at the fastest clip in the country, and no matter how you plea that it is “we the peoples” fault for the rocketing growth of pension promises and payouts, the “fallpeople” are exiting, along with their promises and what little personal money they can secure. What next, Advocate? Bind people to their “contract” even though they live thousands of miles away? Why, of course. Not only that, let’s tax the :sins of the fathers” and tax any offspring, living in IL or not. Yes! Brilliant! Emoting won’t cure faulty math.