On Feb. 6th, Wirepoints released a report on pensions that revealed Illinois’ extreme and unsustainable growth in promised benefits over the past three decades. It debunks the narrative that underfunding has caused Illinois’ state pension crisis.

The actual growth in benefits handed out to state workers and retirees since 1987 has dwarfed everything else in the economy, from incomes to inflation to population to the state budget. Multiples times over. 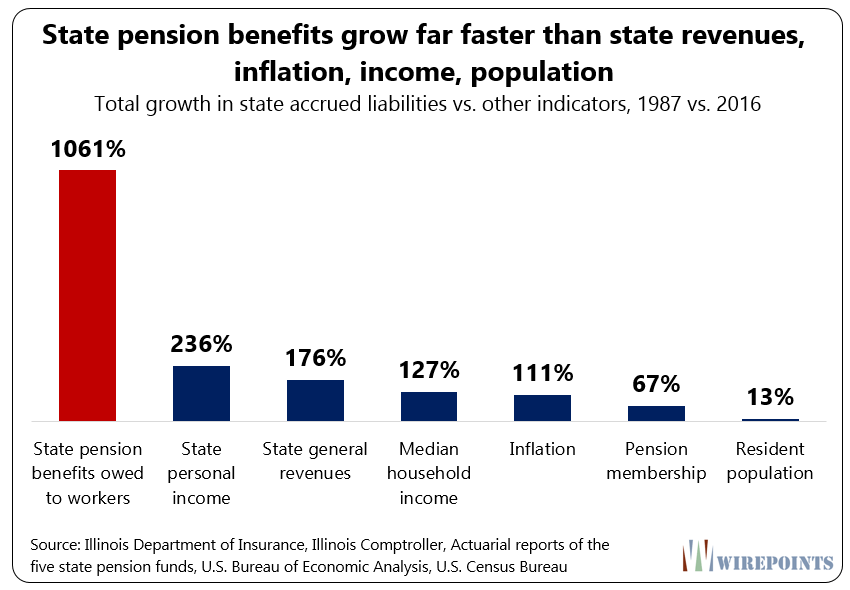 This has all kinds of obvious implications for the economy, growth, outmigration and most importantly, the lives of ordinary Illinoisans.

Pension growth – at nearly 9 percent a year for 30 years – is swamping everything else. It’s no wonder why Illinoisans in so many parts of the state are struggling with high taxes, weak job prospects and stagnant incomes.

But the findings from our research also have other implications:

One, the gubernatorial candidates that support the status quo on pensions and a progressive tax hike should be criticized for their positions. Their call for more taxes should be pointed out as hypocritical when it’s been excessive pension promises, and not underfunding, that’s to blame for the crisis.

I think the media needs to get a clear answer from every major candidate about what they want to do about pensions. Given it’s the biggest problem in Illinois (tied with corruption), their pension “solutions” need more attention.

And actually, it’s their tax hike proposals that need the most scrutiny. No matter what they say their new taxes will pay for, any funds will inevitably end up paying for pensions.

Gubernatorial candidate Dan Biss wants an $8 billion LaSalle tax on financial transactions, and a progressive tax, to boot. No doubt he’ll hide behind the underfunding narrative to guilt Illinoisans into accepting higher tax burdens. Candidates Chris Kennedy and JB Pritzker are also for a progressive tax hike. They’ll do the same.

All of them should be called out. They supposedly champion Illinois’ middle class, yet their only solution is to impose ever higher taxes to fund a benefit system for government workers that has blown way past Illinoisans’ ability to pay for it.

Two, a financial mess like this would normally be investigated. Any business that ignores or hides a massive liability for decades will end up on the brink of, or in, bankruptcy.

Illinois’ near-junk credit rating, years of unbalanced budgets and steady outmigration show the same can happen to a state. It just takes longer and will ultimately harm millions more people.

If this state were a corporation, think Enron or Worldcom, all kinds of regulators would be sniffing around and asking all kinds of questions. How did lawmakers get this so wrong? Was the extreme growth in benefits due to incompetence or was it purposeful?

Though the odds of a real investigation happening in Illinois are zilch, it’s still worth asking the right questions.

Illinois has seen plenty of “investigations” that detail the impact of the pension system’s crisis, from COGFA (here) to the DOI (here) to my own previous work (here, here, and here).

But there haven’t been any real investigations of how this happened.

The “best” person to take the lead on this is Illinois Attorney General Lisa Madigan. Unfortunately, there just might be some conflict of interest there…

House Speaker Mike Madigan has been in power for more than thirty years, which coincides with our findings. He’s the one common thread across three decades of explosive pension liability growth that’s never been seriously addressed.

I can’t be sure if anything criminal was done or not. I lean towards no. After all, Hanlon’s Razor says “never attribute to malice that which is adequately explained by stupidity.” If Illinois’ pension crisis is the result of lawmakers’ willful ignorance, then it’s even more damning proof they should never have been in change of government worker retirements in the first place.

Either way, it’s way past time for a proper dig into how Illinois got into such a big mess.

Download PDF of the report        View the report’s key findings

Wow, great article Ted, and great comments. Is it even politically-possible to elect Repubs who would run on the only solution: IL Constitution must be amended to permit pension cuts — continuing attempts to fund the pension plans adequately are fruitless and produce the damaging current prop taxes that are too high. But how do the numbers look: Govt ees + net “takers” just may be over 50% of voters.
Therefore Rick’s comment here is a answer: Must move to get out of the mess.

The best account of how Illinois accumulated $250 billion in unfunded pension liabilities is the piece in Crains. It’s also worthwhile to read the series in the NY Times about how the NYC subway deteriorated so badly. It’s a similar situation to the pension mess.

S&P 500, thanks for sharing the articles. I reread the Crain’s piece and McKinney does a pretty good job of capturing the issues, specially the benefit increases. But his article does the same thing that pretty much all of us have done, blame underfunding. What nobody has really done is to look at the total growth due to the benefit increases (most of which are not even mentioned) and seen how extreme they were. The benefits grew so fast they made what taxpayers put in look wimpy, when in fact what they put in was more than enough to fund… Read more »

That’s a good point. The media has to shift more of the story to the benefits that have been overpromised. This year cities have to start reporting unfunded health benefits on their balance sheets. The LA Times had a story on SB400 in California. You will probably enjoy this you-tube vid where the pretty lady talks to some city managers in Costa Mesa who are grappling with future pension bills. (and Costa Mesa is supposed to be a rich city) I believe that one problem is the idea that people have that governments can’t go out of business. I wish… Read more »

Because The government can run a Ponzi scheme legally. Nobody else can. When the government running the ponzi scheme, is also the entity that would have to prosecute it, and is also the entity benefiting from the scheme… It won’t be ended. Even the justice system benefits from the ponzi. The scheme… It buys votes, it takes care of the government sector in early retirements, low contributions with high payouts and lifetime health care, with raises. Everyone running the ponzi benefits, it doesn’t matter that public sector compensation has morphed into an obvious Ponzi scheme paying credit with credit and… Read more »