State politicians are ready to go on another borrowing binge.

According to a recent S&P presentation given to bankers and other government officials, Gov. J.B. Pritzker wants to borrow another $6 billion from the bond market over the next year. It’s part of his plan to hike taxes, borrow and extend debt repayments to plug the state’s budget holes. As a banker present at the meeting told me, even the financiers were caught off guard by the amount and the timing of the debt.

The question is, “when will too much debt finally be too much?” As the Wall Street Journal recently reported, Illinois already contributes more than 25% of state revenues toward pensions and other debt, and it would jump to over 50% if Illinois paid the proper amounts. Illinois is the nation’s extreme outlier when it comes to too much debt and you have to wonder how far the state can push it before the game ends.

What’s on tap, according to S&P? 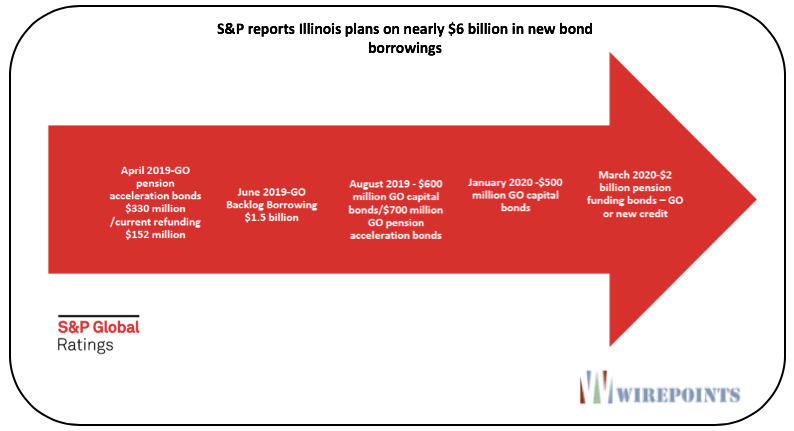 Look for the status-quo pundits to say that all this new borrowing is good. That it refinances more expensive debt, like unpaid bills, and that it helps replace some of the pension debt outstanding.

But anybody who’s been following Illinois knows that more debt simply begets more spending and more debt. It’s how Illinois has ended up with the nation’s worst pension crisis and $234 billion in unfunded liabilities, according to Moody’s. It’s how the state racked up another $73 billion in retiree health insurance obligations, all of it unfunded. And Illinois’ bonded debt burden is already one of the nation’s highest, according to the S&P presentation.

Borrowing more to “fix” the state’s debt problems is precisely what’s gotten Illinois into this mess and Pritzker seems set to continue the trend that was started by former Gov. Jim Edgar’s pension ramp and perpetuated by Govs. Rod Blagojevich and Pat Quinn’s pension obligation bonds.

Nevertheless, it’s clear Illinois hasn’t reached an inflection point yet. A demand for municipal debt nationally, a goldilocks U.S. economy and low rates globally mean investors are still looking for high interest rates anywhere they can get them. Illinois and the premium interest rates it must pay gives them just that.

But the good markets can’t be expected to last forever. Expect more eyebrows to be raised as the debt load gets bigger and the markets get dicier.

For details on how Illinois has racked up so much debt, read Wirepoints’ research reports and commentary here:

Every Illinoisan Must See These Two Charts In The Wall Street Journal – For the state, about 25% of revenue now goes towards pensions and other debt, but that would jump to over 50% if proper amounts were being paid.

TruthinAccounting had a piece on the use of “deferred assets” on balance sheets. I thought these went out with Enron, but apparently Illinois and a few other public entities are using them to cover up pension debt. The Philly School District in Pa. has assets of $2 billion, deferred assets of $700 million, and debts of $8 billion. I hope that GASB looks into this kind of book-cooking.

They borrow because they can, the friendly rating agencies, the great collateral offered to the bond market in both a constitutional clause and hard collateral putting bondholders first in line for repayment. A thirsty market for yields. And leaders willing to raise taxes. And the elimination of bondholders risk in bankruptcy. All forces are enableing more borrowing not less. The only possible end to Illinois borrowing madness is when the rating agencies declare junk and force the big players out. But that won’t happen anytime soon, the market and raters have us right where they want us, by the short… Read more »

You can’t fix a debt problem with more debt.

When will these knot-heads ever learn?

And it’s not just that. They borrow more (longer maturities, or more backloaded repayments) to free up space to borrow more. Smart.

When the entire state is utterly destroyed and looks like Harvey.

February 19, 2020
If you’ve listened to Gov. J.B. Pritzker in the past few weeks, you’ve heard him play games with words. We called him out on it recently and now he’s doing it again. If the progressive tax fixes the budget deficit and delivers a tax cut, then there will be no money for property tax relief.
View Comments (13) | Add Comment