Whether you know nothing or everything about Illinois’ state and local fiscal crises, take a moment to digest these two charts published by the Wall Street Journal today. Every high school in the state should be devoting a class to them, and every paper should have them on the front page. After you look at them, take a moment to consider how our political establishment is responding.

Focus on the top line in both charts. They aren’t complicated. They show how much of total revenue collected by the State of Illinois and the City of Chicago is now being consumed by payments on pensions and other debt, and how much worse it would be if proper amounts were being paid. 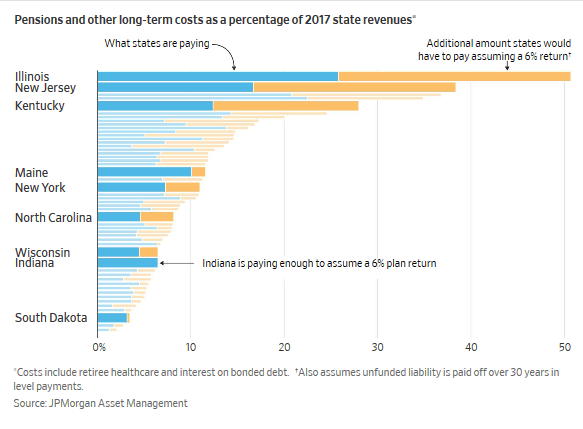 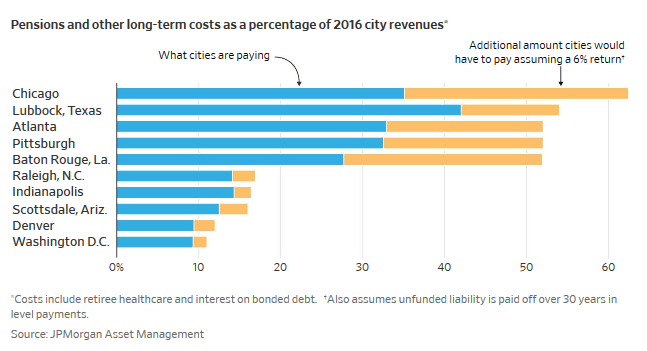 You read the charts right. For the state, about 25% of revenue now goes towards pensions and other debt, but that would jump to over 50% if proper amounts were being paid. For Chicago, about 34% of revenue is already being consumed by those payments but doing it right would take over 60%.

The charts are based on the work of Michael Cembalest, Chairman of Market and Investment Strategy for the asset-management arm of JPMorgan Chase & Co. Wirepoints, alone in Illinois, has been reporting that work consistently for over five years, trying to call attention to it and similar work by ourselves and others.

The implications are catastrophic. No government can provide a reasonable level of services when it is burdened so heavily by legacy pension and other debt. That’s especially true for governments with tax burdens already as high as Illinois and Chicago’s. Similar numbers apply to many other towns and cities across the state.

The charts are based on the assumption that investments set aside to pay pension obligations will earn 6% per year, which is generous. Many financial experts say a lower assumption should be used, which would make the numbers worse. The “Costs” shown in the charts include pensions, retiree healthcare for pensioners (both of which are constitutionally protected in Illinois) and interest on bonded debt (though that interest is a very small part of the problem). The numbers for the additional amounts that should be set aside assume that unfunded liabilities would be amortized over 30 years in level payments.

How is the Illinois political establishment responding?

Here’s the central message now being blasted across the state by proponents of a $3.4 billion state income tax increase on high earners: “Illinois is in a $3.2 billion financial hole. A Fair Tax could fix that and reverse the damage.” That’s an epic lie. The “hole” isn’t $3.2 billion. It’s roughly a quarter of total revenue according to this work, which is consistent with our own numbers — about $10 billion — and that’s just at the state level. The new $3.4 billion will go down a nearly bottomless pit.

Much of the Illinois press plays along with the deceit. Nothing to see here. Don’t scare the children. The sky isn’t falling. Nothing a little tax increase won’t solve.

Pension or retiree healthcare reform? No, not one dime of that is needed according to most of our politicians, including Illinois Governor JB Pritzker and Chicago Mayor-elect Lori Lightfoot. They’ve all ruled out the state constitutional amendment that would be needed for that.

Illinois politicians may carry on in their alternate universe, but the national press is waking up.

Governor & Mayor don’t discuss the absolute necessity to amend the state Constitution to permit pension cuts. They’re stuck in the establishment, but they should know better.
But the Tribune and Sun-Times should have articles every day on page A-1 describing the crisis, and the ONLY fix – to cut pensions quite significantly for all ppts even current retirees.
It’s do or die and the clock is ticking ! But newspapers stay silent.

Every high school student should be shown these charts. Unfortunately they would be completely clueless. They would respond with the usual “pensions are pay as you go”, and “the rich should pay more tax”, etc. Their teachers would be clueless as well, and no union teacher would be interested in devoting a class period to talking about the broke state of Illinois. It might be more effective to show students the balance sheets of Illinois, Chicago, and especially CPS. Some of them might be scared if they understood the difference between a debt and an asset which most of the… Read more »

What is the blended average expected rate of return for all the State retirement funds? I know the teachers funds expect more than 7% per year compounded. Seems high to me.

7.1% is their blended assumption. Most have beaten that in the ten-year bull run we’ve had, and many have beaten that over 40 years, including TRS. In the private sector pensions that remain, 5.5% or so is more common, which seems about right to me. (Of course, if you really wanted to guaranty it as we guaranty the pension benefits, the investments would yield under 3%).

So these governing entities basically have two forms of income… Collected revenue vs debt. On the revenue side they are about to hammer us again but on that side they are losing people and things and values to tax. On the debt side they have what’s starting to look like a Ponzi scheme. as they get nearer to default, because the investment ratings are being kept artificially good because of a mere clause in the constitution. Then on the expenses side they want to be a drunken socialist sailor on leave buying drinks (votes) for the house. So far only… Read more »

Rick you are right but on the bond side if you listen to Jeanne Ives at the City Club (youtube) the bondholders got a sweet deal put in the last minute that in the event of a municipal bankruptcy or even the implication of bankruptcy when and if that becomes legal the bondholders can get 90% of future sales tax revenue for up to 40 years until they are paid even before pensioners. This applies to home rule communities which Rockford is not. I believe Madigan sneaked this in the last minute. Could you check if this info is correct.

Freddy, that’s right, and allow me to brag. As that horrible bill was moving through the legislature we at Wirepoints, and we alone, wrote about it and criticized it for what it was. See https://wirepoints.org/illinois-bill-to-prioritize-bondholders-over-the-public-and-taxpayers-must-be-stopped-wirepoints-original/ I wrote about it in Crain’s, too. We heard about it through Ives. She, waiving our articles around on the House floor, had the bill stopped. But Madigan indeed stuck it into the thousand-plus budget legislation at the end of the session and that’s how it became law. The full recap is here: https://wirepoints.org/jeanne-ives-fiery-description-of-how-chicagos-new-bond-scheme-sold-out-pensioners-and-taxpayers-quicktake/ Nobody in the regular press ever covered any of it.

That’s too bad, because none of this ends until the borrowing occurs with the natural forces of risk to the investors still in place. The legislature has basically legislated out any risk to buying crappy bonds here. Between this law, the constitution clause and rating agencies that basically give pritzker his marching orders. Where agencies are free to manipulate the very bonds they are rating. Illinois bonds are now a low risk and high yield investment. With such secure cash available every year there is no incentive left for anything to change here. With the supply in place and risk… Read more »

Wow. I never knew about this and I’m better informed than most (I think). Doesn’t this potentially also screw over the older bond holders? I wonder what the bankruptcy courts will think of this tactic?

Can you throw in a 20 year historical chart for this metric? The situation is already pretty dire — that is obvious. But I would be interested to see how fast it is accelerating, as well as how fast it accelerated in 2008/2009.

That would be long to compile, but I can tell you that the budget was not truly balanced since 2001 when the last of the revenue from the dotcom bubble came in. And this shows the pace of the deterioration. Illinois’ true budget deficit has averaged about $12.5 billion over the last ten years. https://wirepoints.org/one-chart-shows-awful-fiscal-trajectory-of-chicago-area-and-illinois-wp-original/

Hank, take a look at the last graphic in this piece: https://wirepoints.org/illinois-state-pensions-overpromised-not-underfunded-wirepoints-special-report/. There you’ll see what pensions have consumed of Illinois’ budget since 1996. You’ll see things get worse over time. But mind you, these are based on the official numbers, which mean the required amortization of the pension debt is much smaller than the truly required one…Hope it helps.

Thanks guys. I was just wondering if there was a way to accurately project when we hit 100% of rev, or when future cash flow strains become critical.

The 100% or revenue thing is not really important because we aren’t actually paying it all, just running it up as debt. But your second question about cash flow is the big one. It’s an eternal one — when does an insolvency crisis convert to a cash flow crisis? My view is that’s hard to predict, but the next recession could be it.

Great article, Mark. Thank you for keeping up the pressure. Sunshine is always the best disinfectant.