Have Chicago’s financial advisors ever shown the mayor and her city council what an extreme national outlier Chicago has become? Do the city’s top officials have any idea just how poorly the Windy City stacks up against the nation’s other major cities? Do they have any clue how much stress Chicagoans live under?

Those are the questions that come to mind when you analyze the pitiful actions the city council came up with to deal with the city’s $1.2 billion budget deficit and, more importantly, its collapsing finances.

The council plugged the 2021 budget hole with hundreds of millions from a scoop and toss refinancing scheme and vague promises of “reductions and efficiencies” – just like in last year’s budget. And adding insult to injury, Lightfoot canceled some small city furloughs but still went ahead with another property tax hike. Her $94 million increase follows Rahm Emanuel’s record property tax hikes during his term.

Not a word of reforms. Nothing on the need for a pension amendment. And nothing on revising labor contracts. Lightfoot’s “most generous contract ever” with the CTU is still in place even though teachers haven’t been in the classroom for almost a year.

The pre-COVID hum of the Loop can’t hide the fact that the city is near its limits. Chicago is already rated junk and CPS fares far worse, four notches deep into junk territory. COVID-19 lockdowns are ravaging businesses. The riots of several months ago and the ongoing crime have done even more damage. As a result, many residents have left temporarily, if not forever.

Below are nine graphics that Mayor Lightfoot and the council should have analyzed in great detail before making any decisions on finances. You’d like to think that they would have at least pushEd for the one thing that has any hope of saving the city: an amendment to the Illinois Constitution’s pension protection clause.

1. The city of Chicago’s fixed costs as a percentage of revenues are at 44%, the highest of any major city in the country. That’s based on a Moody’s analysis that takes into account debt service and the pension contributions required to prevent pension debts from growing. 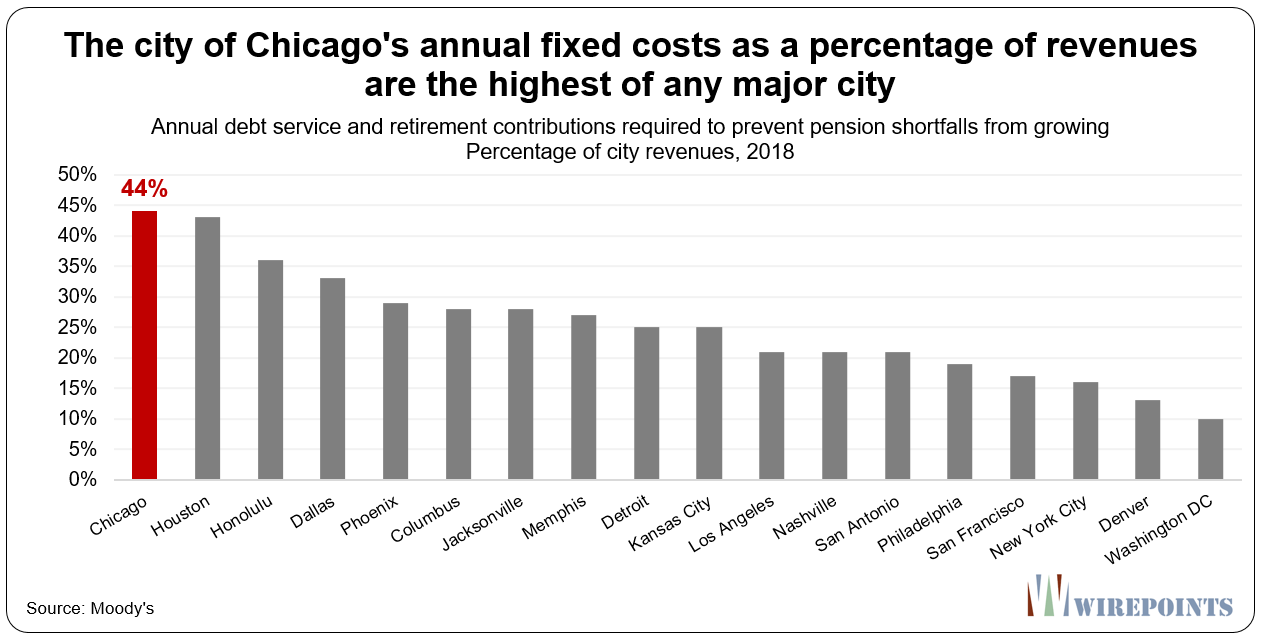 2. A separate but similar analysis shows that the city of Chicago’s retirement and debt costs would jump to 62% of revenues if the city were to pay its true actuarial pension costs. That’s by far the highest of any major city in the nation. That analysis was done by JP Morgan’s Michael Cembalest. 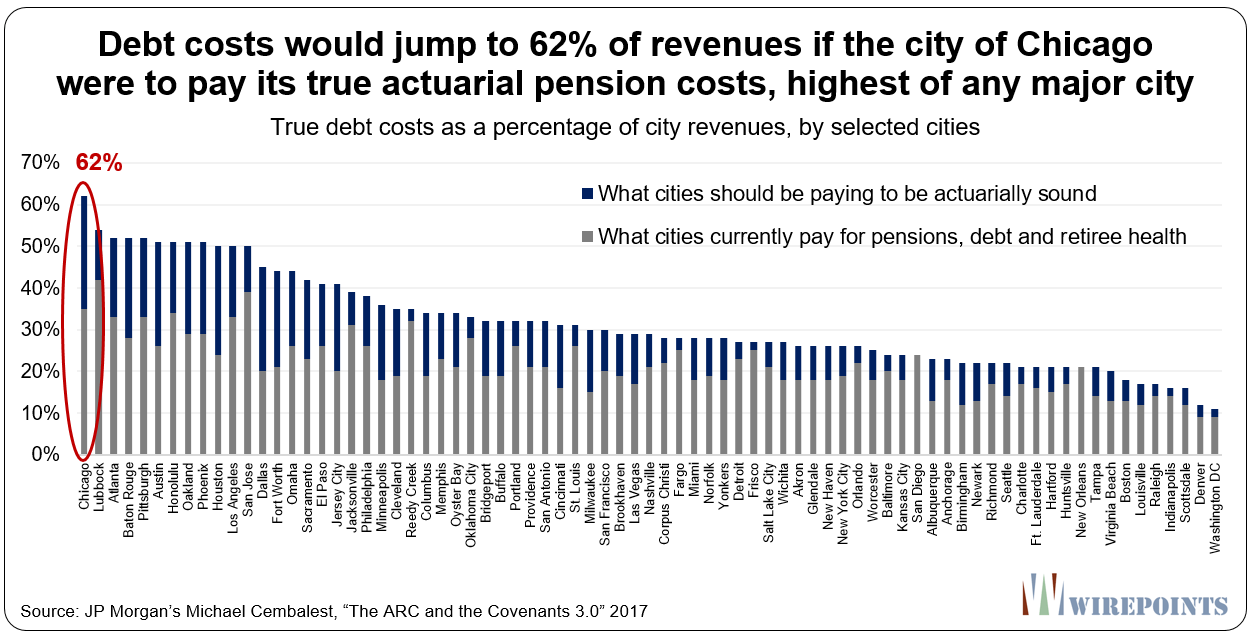 3. Moody’s also reports the city of Chicago’s total debts as a percentage of annual revenues are at 735%, again the highest of any major city in the country. 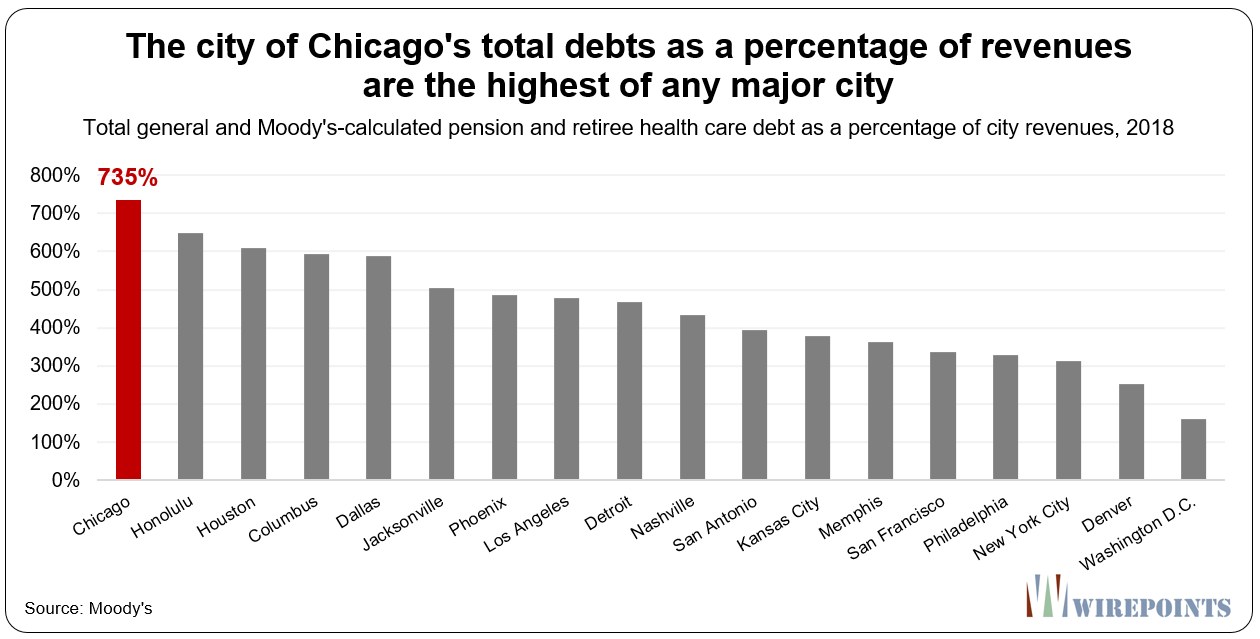 4. The problem is systemic. Chicago’s other local governments have total debts as a percentage of annual revenues that range from 543% to 746%. No other metro area is as indebted as Chicago is. That’s based on a Moody’s analysis of the 50 biggest local governments in the nation. 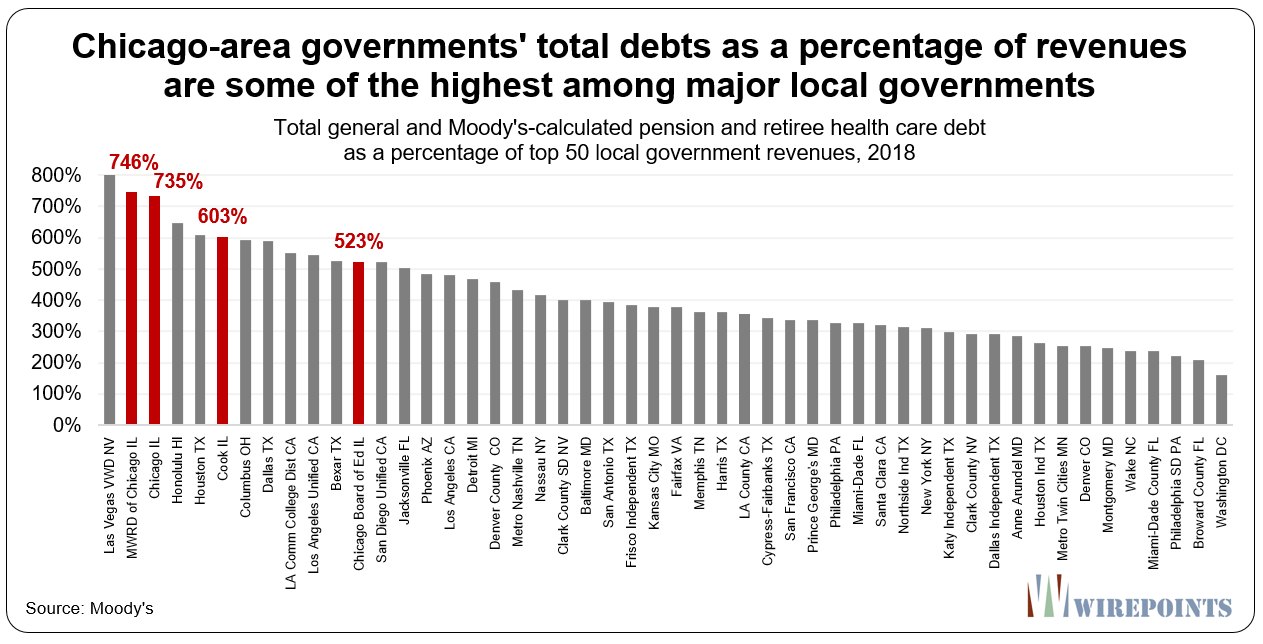 5. Much of Chicago’s pension crisis stems from overpromised benefits. Career government workers are, on average, retiring today at age 60 with starting pensions of just over $70,000. Those career workers can expect to average about $2.1 million in lifetime retirement benefits.

That’s far higher than anything the average worker in Chicago’s private sector can expect to receive in retirement. It’s also far more than they can afford to pay for. 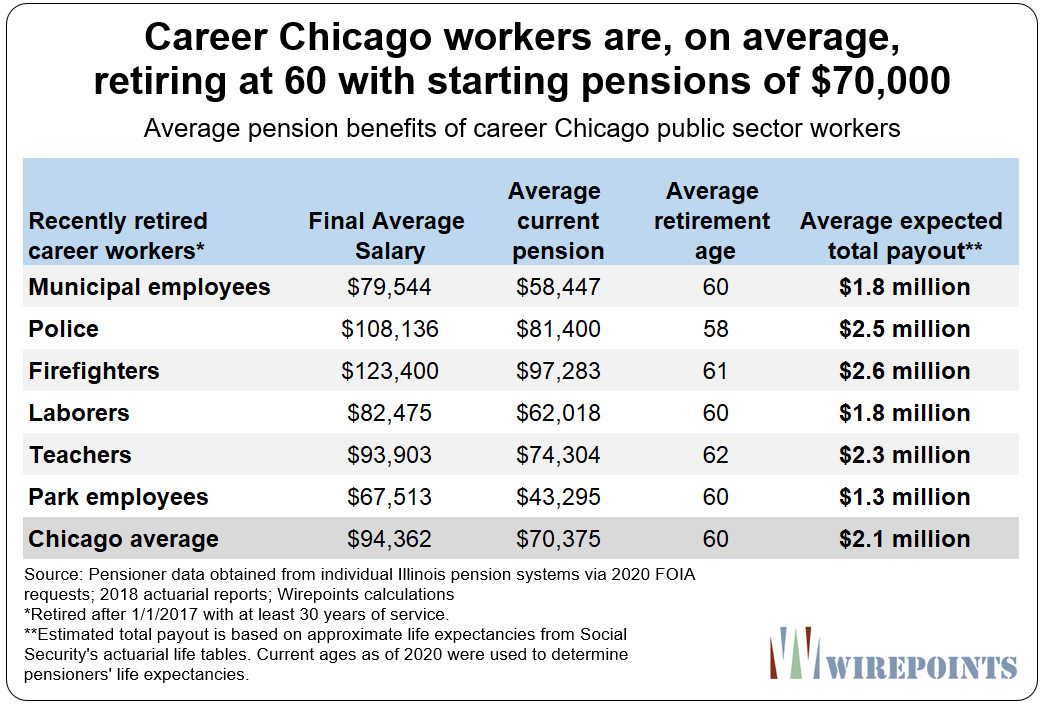 6. The city of Chicago is the only major city besides Detroit to be junk-rated. Chicago Public Schools is already rated four notches into junk, according to Moody’s. 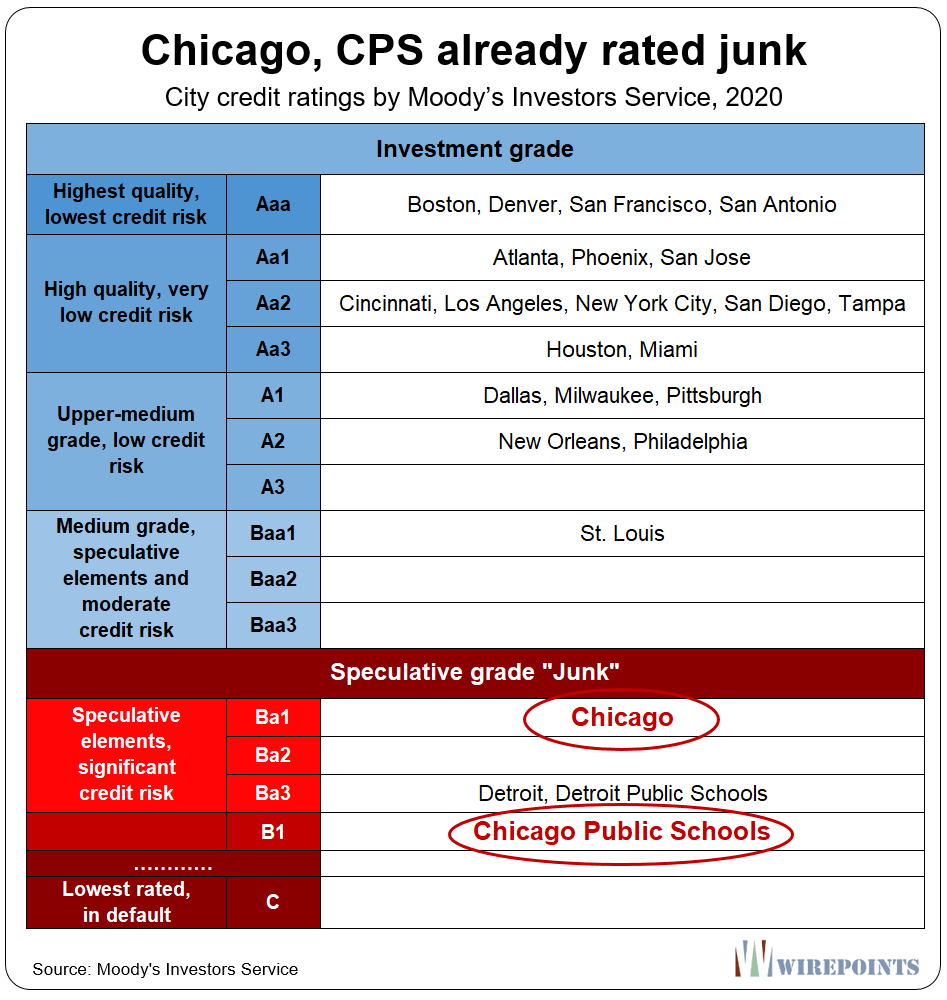 7. It’s important to remember that Chicago households are on the hook not just for city retirement debts, but also for those of the city’s sister governments (CPS and the Park District), as well their share of Cook County and state retirement debts.

Add up all the overlapping debt Chicagoans are on the hook for according to Moody’s and it totals $141 billion. Divide that total by the one-million-plus households in Chicago and the per household burden is $135,000 each. (Many households are too poor to contribute to the burden, meaning Chicago’s remaining households will have to pick up the slack.) 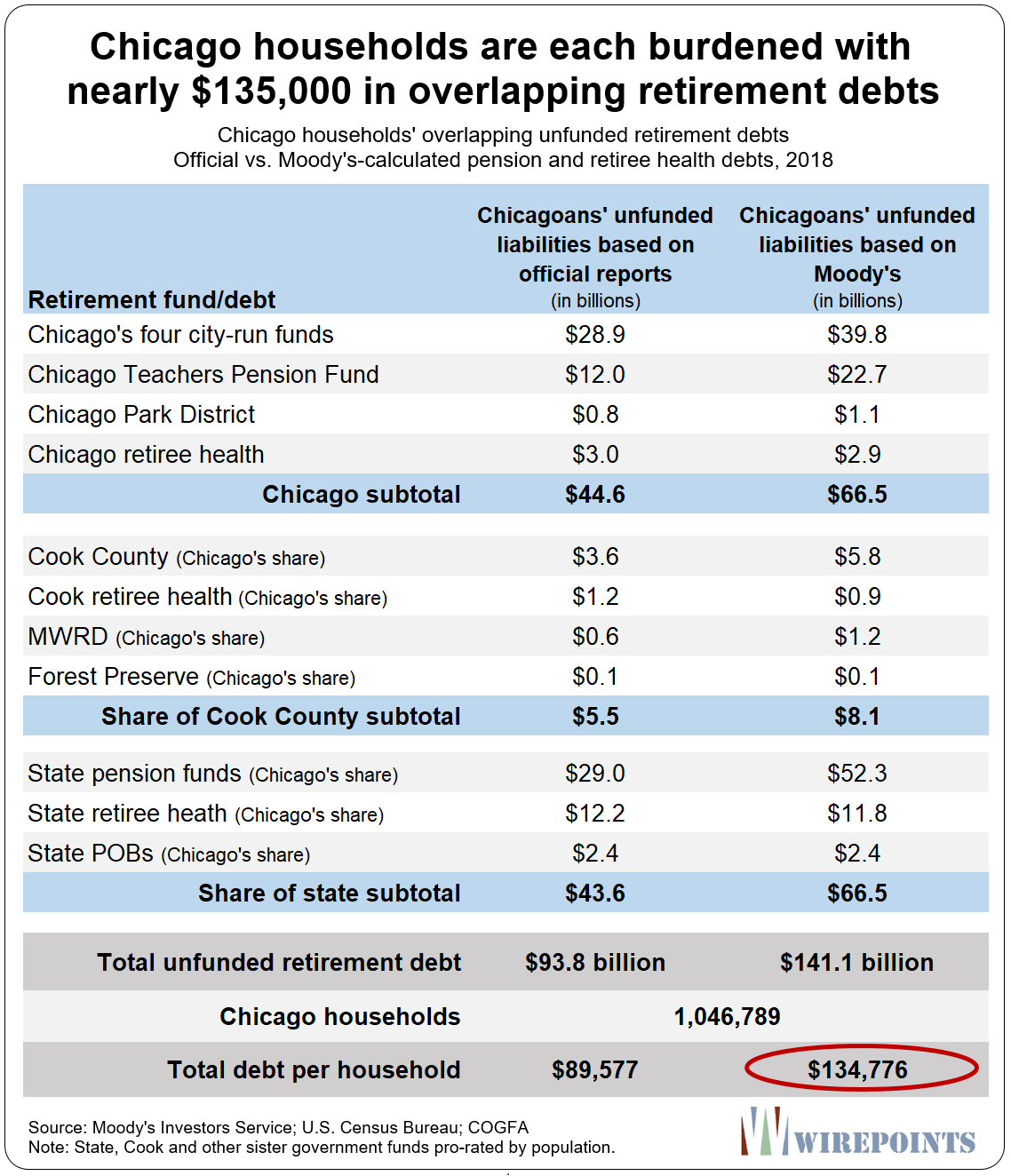 8. Chicago has the worst home price growth of any of the 10 cities listed on the Case-Shiller Index – a leading measure of U.S. home prices. In fact, Windy City homes have actually lost value when inflation is taken into account. Since 2000, Chicago’s home prices have grown 49 percent, slightly less than inflation (up 51 percent).

9. The Chicago metropolitan area has lost population five years in a row. No other major metro is shrinking like Chicago. Since 2010, it has lost 12,000 people, while even struggling New York managed to gain 130,000 in population. That’s based on U.S. Census data. 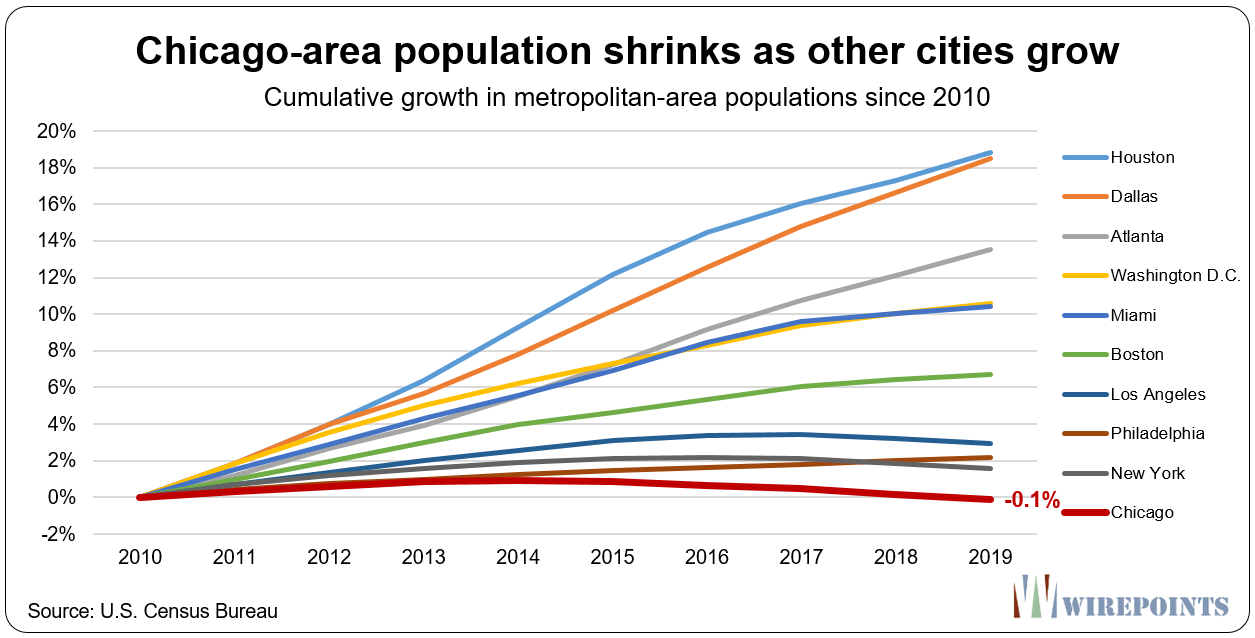 Wait, you are assuming they actually care

Who the hell is “groot” that u keep refering to!?

Who the hell is “groot” that u keep refering to?

And they will never, ever substantially cut spending or crack open the constitution to overhaul pension obligations. They will continue to raise taxes until there is a Federal bailout. That’s right – the responsible states will bail out the blue states. Coming from a Chicagoan, I beg you not to let them.

The pandemic lockdowns make it even more difficult to leave Crazytown, otherwise this one party paradise would be emptying out even more quickly. Expect a high tax on selling your home and moving out of state. It takes substantial resources to move, and one needs someplace to move too. It’s not coming back in my lifetime. The 3% COLA for public unions did enough damage, now 5% annual increase in Chicago property taxes. The only ones who will stay will be those with no other options, or the various criminals who make comfortable livings off of the chaos. Zero fiscal… Read more »

All this info would really be depressing for Chicago residents if they were forced to live in that city. Let’s keep in mind they must want to live there or they would leave. Sympathy under these circumstances is not warranted/deserved. The same is true for Illinois residents.

5
The Truth Hurts
Reply to  LessonLearned

I completely agree that sympathy is not warranted. They don’t just want to live there. They choose the leaders that make these decisions. People need to quit blaming politicians and accept that voters are responsible. I have yet to see a candidate in Chicago run on the platform of cutting spending and reducing taxes. The voters in Chicago want their teachers, firefighters, and police to be the best paid in the nation. They want more spending not less spending. They want more taxation (on the other guy) not less. They want gimmick budgets that punt on major issues otherwise you… Read more »

6
LessonLearned
Reply to  The Truth Hurts

For me, living in Chicago would be an embarrassment. Most Chicagoans however appear to be proud of their city. I stopped trying to understand them.

Those Chicagoans who continue to vote for those corrupt and incompetent politicians in Chicago, Cook County and Illinois cannot see the destruction their elected leaders have unleashed because their heads are stuck up their donkeys.

1
Fred
Reply to  The Truth Hurts

Pain there is but more is needed. Public sector layoffs, missed pension payments for public retirees. In a perverse way, more riots and looting and left v right confrontations. COVID deaths and disruption are plainly not enough. Mogadishu level misery. Martial law misery. Things that will stupefy the stupid and cleanse the clueless. ‘Til then, more of the same.

This is exactly right. In addition, I’ve found that many Democrats think that government and government programs make cities great. They believe that the gleaming skyline and the institutions in Chicago all came from great regulation and a heavy governmental fist. All of them fail to understand that the private sector builds a great city despite the corruption, iron fist and interference. The private sector finds a way to make a profit (mostly by passing along the political rent seeking to unsuspecting buyers and renters) by working around the system and overcoming it as best as possible. So Democrats want… Read more »

6
Another Illinois resident that is moving
Reply to  LessonLearned

Been here four years, I am moving to Texas in four months. I am voting with my feet

9
LessonLearned
Reply to  Another Illinois resident that is moving

I lived in Illinois my whole life. My new life in Tennessee starts in 2 weeks. Goodbye Illinois. I would have stayed if I had been treated fairly.

There’s really nothing left to be said. New Chicago theme song – Dream On.

It is worth mentioning that Wirepoints published an excellent article here.

Of course. I meant that they had covered it all very well.

January 22, 2021
A sweeping, radical rule is pending for Illinois K-12 teachers that should prompt everyone, of all political stripes, to fear about the fundamental roles that teachers and classrooms are assigned to fulfill.
View Comments (3) | Add Comment