Mamie Cosey lives just a couple of blocks away from an East St. Louis fire station that’s been threatened with closure. The long-struggling city doesn’t have the money to pay for both its pension costs and its active public safety workers. Shutting the building down would leave the city of 20,000 people with just two operating fire stations.

“I have great grandchildren that live with me…So what am I supposed to do? Am I supposed to just let my house burn? Or maybe I won’t get out of the house? So that’s a great concern for me,” Mamie told Wirepoints when we visited her.

Mamie and her family are victims of a growing malaise impacting cities across Illinois, where residents are taxed out, services are being slashed, police and firefighters are losing their jobs, and public pensioners are losing their retirement security. A recent law that garnishes city tax revenues to pay for pensions is making things worse.

Wirepoints visited East St. Louis last year when the city was in the midst of just such a financial fight with its local police and fire pension pension funds. Our conversations with local residents became a part of Wirepoints’ new On the Ground video series. 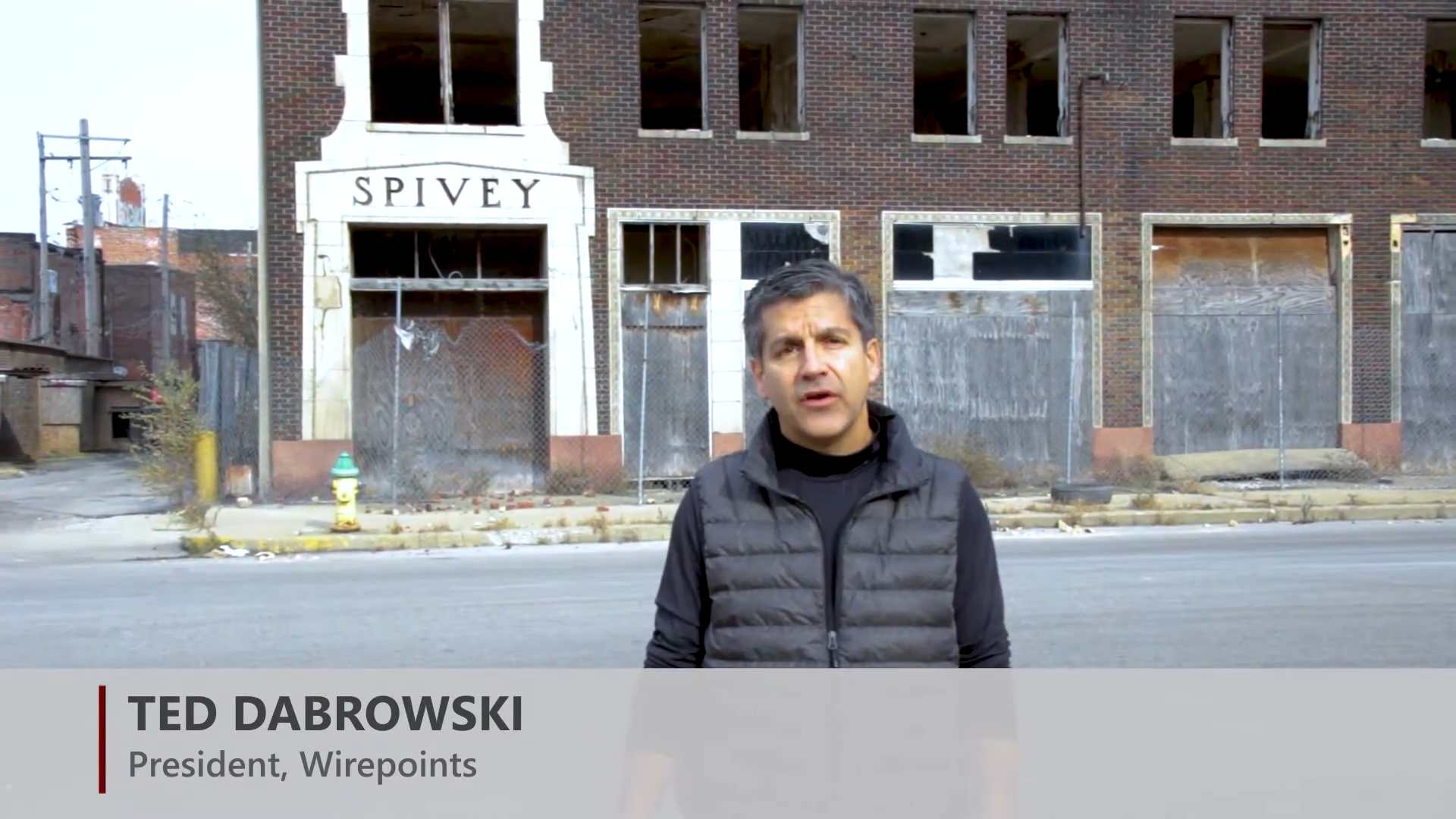 Cities like Harvey, North Chicago and East St. Louis are the worst-off in Illinois. They are unable to properly pay for public safety services or public safety pensions. But there are many other communities across the state headed down the same path. The COVID-19 pandemic has only accelerated their decline.

Cities desperately need help, and yet Illinois lawmakers are doing nothing. They won’t pursue a pension amendment or reforms, they won’t roll back labor laws, and they won’t even give cities the option to declare bankruptcy.

Instead, lawmakers have imposed on cities a “pension intercept” law, which gives local pension trustees the power to demand the state comptroller garnish a municipality’s tax revenues so they can be handed over to the pension fund. It’s just another state mandate.

Wirepoints’ latest Special Report Will COVID-19 lead to “pension intercepts” and cuts to core city services across Illinois? details how 200 cities across Illinois are in danger of having their revenues intercepted. 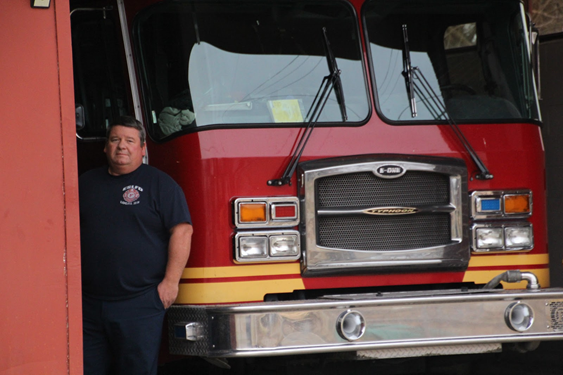 The intercept law is not a solution for either cities or local pensions. Pouring more cash into broken retirement funds will lead to slashed city services, lost police protection, and fewer firemen for emergencies.

Mamie Cosey knows that will only make things worse for residents like her: “We need the fire department. We need the police protection. We need all of that help so that our community will thrive and be a safe environment.”

Structural pension reform, starting with a pension amendment, is the best way to help Illinoisans like her.

I don’t know about Harvey and North Chicago but I do know about East St. Louis. East St. Louis is a poster board town for “vote for blue no matter who” and now is facing the realities of the results of their election choices. naturally rather than face the music I assume we will hear the usual complaints of racism, who cares about the poor, the rich blah blah et al. The people of East St. Louis have done this to themselves and the City is just an example of what soon will be happening across the State. It is… Read more »

Mark- Interesting article today at http://www.marketwatch.com on the $4.6T pension crisis and how Canada fixed their system somewhat. Scroll down to Opinion. Good info about the Illinois mess.

I saw that but have to disagree. I see little in that article that would help the severe cases like IL. It’s mostly just generalities about how to run a pension that is already healthy.

I agree. There will be no give by the unions only take which was one of the conditions. No shared sacrifice whatsoever. Most of the politicians here are bought and paid for.

I totally agree; read that and instantly was left wanting. Yay, Wisconsin knows what they are doing, or Canada fixed some stuff 40 years ago. Great job. Means little for IL.

Hmmmm…. Public safety employee paychecks or their pension? Are you sure that is message that you want to send?

Q. Stick’em up; your paycheck or your pension!?

Be quick about it now!!!

A. I’ll take Florida where plenty of doctors, nurses and cops are needed.

Pensions should be totally funded buy the local agency of hire.

I look forward to the coming civil war by 2025. A lot “useless eaters” and “worthless breeders” are going to finally understand what “Darwinian Law” really means.
“Cry Havoc and Let Slip the Dogs of War”

4
Reply
Aaron
Reply to  the observer

Just a cursory internet search reveals that California has 26,000 retired public employees receiving six figure pensions as of 2019 and we have about 19,000. Pretty close considering Cali’s population is about 5x that of Illinois. New York has about 8,000 educators with six figure pensions but we have them beat with about 13,000 of our own. I suspect that Indiana, Wisconsin, Missouri, Iowa, and Kentucky have many fewer six figure pensioners than Illinois has but I was too lazy to look all of those up. Illinois pols and their stooges in the press plead that our retired public employees… Read more »

The compounding effects of benefits today cascade to pension deficits of tomorrow. Case in point: Daley Days. That rule states that after working 4 days, Chicago firefighters got their 5th scheduled working day off, giving them 5 days off in a row every few weeks. Or they were given a paid day off for every five days they worked. Or 5 days off every 13 days. What happens when you give employees more days off yet are still required to staff 24/7? You hire more employees to work those additional off days. Of course, those employees get the same generous… Read more »

Daily days are based on hours worked. They are furlough days, unpaid days off. They are not vacation days. The 24 hr schedule adds to work hours. Unless you want to pay overtime for those shifts, I saw let them get the unpaid day off. Hours worked per the law in access of a full week gives 1.5x the hourly rate. I bet most would love the extra money instead.

Time to join the exodus to Indiana and give your family the lower taxes, better services, and better life they deserve.

Wisconsin has a fully funded pension for public servants and their pensions costs are a fraction of what we pay. But then again the voters of Wisconsin demand their government to act responsibly and they don’t accept greed and corruption as the norm.

The ‘pension intercept’ is needed to hold Municipalities accountable for promises they made to their employees. If the promises made where foolish, well that’s the localities issue to correct. The state must help by allowing for bankruptcy so Municipalities can explore all corrective actions.

Before they get to the brink there’ll be strikes and riots and looting. Thus the politicians oppose going to the brink. (What’s the brink: insolvency or bankruptcy.) Problem we need to get to the brink before anything is done. So we have to endure more strikes, looting and riots. Nobody but Churchill wanted to confront Hitler in 1936. Americans opposed getting into the war until Pearl Harbor. Democracy falls short when we vote for personal tranquility.

FYI: There is 3rd choice, or actually 49 other choices.

Stay there. Resolve the issues – because if you leave you’ll just bring it with you. Always seeing something else that, ‘would be nice to have’. There are only a total of 50 States and what, around 5 territories available. After you leave the one because of being taxed out, you will have to leave the next one – because of, ‘Being taxed out.’ The reason that other state looks so good to you now is, ‘because of those low taxes’ – but the necessity of adding services to appease the newly arrived – will make it look just like… Read more »

Dogen, I totally understand your sentiment. Unfortunately, for conservatives, staying in Illinois is not a realistic option. Everything this state does tells us, “we aren’t wanted”. For us it’s, “shut up and pay for our Illinois insane liberal agenda or get the hell out”, so we are getting the hell out. You can only fight the liberals for so long in Illinois before you realize it’s pointless. If I end up being your neighbor some day, I’ll try not to be a burden.

December 2, 2020
Ted was on with Brian Costin of Americans for Prosperity discussing the general election and what it means for Illinois' worsening financial crisis.
View Comments | Add Comment

December 2, 2020
Our answer never seems very satisfying so now we are putting it on you. Have at it.
View Comments (87) | Add Comment

December 1, 2020
Priority No. 1 couldn’t be more clear. Pensions are Illinois’ biggest problem and they cannot be fixed without an amendment to the state constitution. Proceed now.
View Comments (70) | Add Comment

ABOUT US
© Wirepoints Corp. 2012 - 2020. All rights reserved.
Contact us: admin@wirepoints.org
FOLLOW US
wpDiscuz
22
0
Would love your thoughts, please comment.x
()
x
| Reply