Now, it’s the police pension fund’s turn. According to a tweet from Caitlin Devitt of Debtwire Municipals, “East St. Louis police pension fund board voted yesterday to ask state comptroller to intercept $1.7m for contribution shortfalls in FY17 and FY18.”

If the trustees follow through and the comptroller finally approves it all, the combined intercepts of city revenues will total $3.9 million, creating severe budget problems for East St. Louis. In total, the city will lose the equivalent of some 20 percent of its budget, based on the city’s 2018 general fund budget of $18 million. 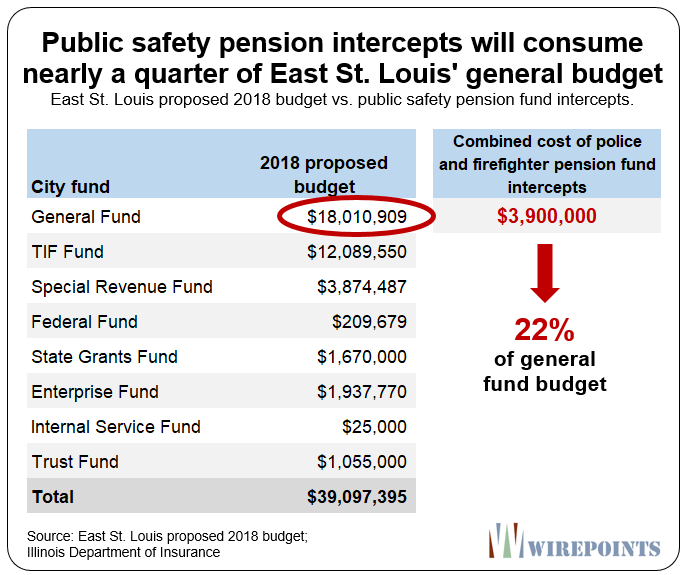 That’s an impossibility for East St. Louis, especially with the city already facing millions in deficits, according to KSDK St. Louis. The city will likely go through public safety layoffs similar to what happened to Harvey, Illinois during its own intercept episode last year.

Harvey, Illinois was the first downstate city to suffer from the intercept law last year, followed by North Chicago shortly after. Now East St. Louis has joined those two cities.*

The problem in Illinois is just starting. Overall, nearly 200 of the state’s 650 public safety funds are less than 50 percent funded. 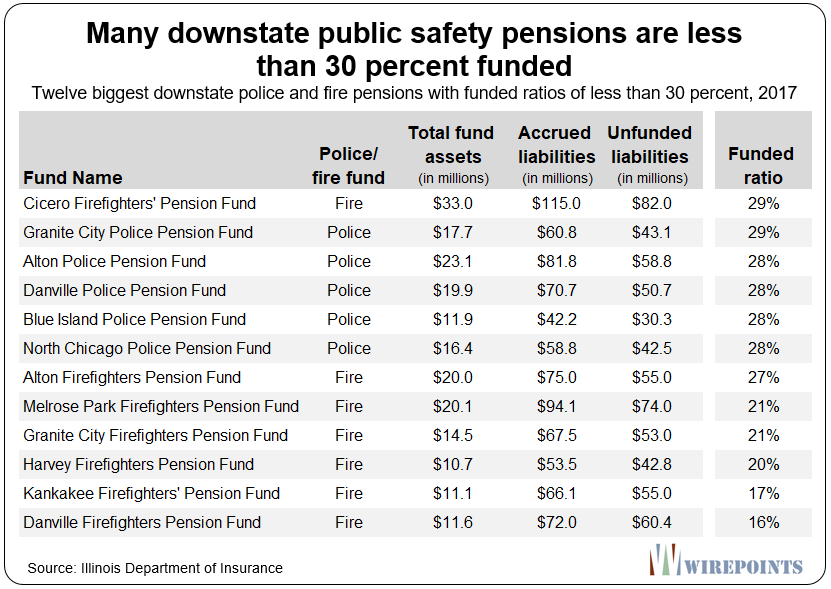 These funds are all struggling despite the strong national economy and the longest-ever bull stock market. Once the economy eventually turns south, expect the number of trustees demanding intercepts to grow.

Many cities like East St. Louis and Harvey won’t be able to afford both the costs of active public safety workers and worker pensions. Without intercepts, retirees will lose what little retirement security they have. With intercepts, active police and fire workers workers will lose their jobs, putting their communities at risk.

That’s why the option of bankruptcy at the municipal level is so important. Some Illinois cities – from Kankakee to Danville to Alton – need debt relief before they do irreparable damage to their communities.

For others, they can be saved with major reforms. Without them, expect East St. Louis to be just the start.

* The city of Chicago also had some revenues intercepted by the comptroller last year, but the amounts were relatively small and inconsequential – for now.

You folks in Illinois are screwed, I lived in Aurora. Joined the Navy and never looked back.

Not only would you not want to move to a community that has reduced or will reduce its police force to below what’s needed, you wouldn’t want to live or travel near it. As more of these communities show up in IL, your route to get from point A to point B will more frequently become a circuitous one.

East St Louis last posted its annual financial report on its website a decade ago. https://www.cesl.us/Archive.aspx?AMID=36 In addition to processing requests to divert state grants to local pension funds, the Illinois Comptroller posts annual financial reports from local governments on its Local Government Warehouse, which reports: “Sorry, but East St. Louis City has not supplied its required documentation for the last three fiscal years. No data is available” https://illinoiscomptroller.gov/financial-data/local-government-division/local-government-data/landingpage/?code=088/050/30&searchtype=AFRSearch&originalSearchString=East%20St.%20Louis%20-%20a%20City%20in%20St.%20Clair%20County%20-%20088/050/30&CFID=18548162&CFTOKEN=2ce8ecf73a97ba41-22A531A7-5056-93B5-5E11E723E1D09827 How about a law that halts state grants to any local government which does not post its annual financial report on its website and / or does not submit its AFR… Read more »

When will there be a taxpayer property tax intercept?? We all pay and pay and it’s never enough. With excessive property tax’s comes loss of equity. Equity is still money but taxing bodies are using our properties as ATM machines. They do not have access to our bank accounts directly “YET” but do thru property tax’s and they know it. Laws were passed (PTELL/pension intercept/etc) that taxing bodies rarely lose revenue year over year by adjusting tax rates to compensate lower total EAV like Harvey where tax’s go up values go down then tax’s go up thus lowering home values… Read more »

September 24, 2020
It’s a scandal unto itself about the organization that’s supposed to be looking out for Illinois consumers in utility rate-making. But the story’s significance goes beyond that scandal. It should also seal the case against CEJA, the Clean Energy Jobs Act.
View Comments (4) | Add Comment