For those concerned about the spike in cases and 34 deaths at the LaSalle Veterans Home, the recent state-level investigations and cooperation with the feds is good news for the future care of our veterans. But the concentrated effort to find out what went wrong at the veterans’ home begs a broader question: Why aren’t state officials paying the same elevated attention to all Illinois retirement home deaths?

Wirepoints, WBEZ and the Chicago Tribune, among others, have been warning for months about the LTC crisis and the need to secure the homes. As we said in April, “When this crisis is finally over, we’ll look back at the failure to protect retirement homes as one of the bigger tragedies of COVID-19.” At the time we wrote that, there were just 625 retirement home deaths in Illinois.

Today, we’re at more than 7,500 retirement home deaths – the equivalent of 220 LaSalle Homes – and yet those outbreaks haven’t generated the same outrage or received the same attention from the state. No highly public investigations, no disclosure of failures and no high-level official has been held responsible. If you haven’t been following the issue, just look at the renewed spike in deaths.

Last week, two-thirds of all deaths from COVID in Illinois were tied to nursing homes, with LTCs experiencing a record 605 deaths. That was just two weeks after hitting a record 480 deaths. Overall, LTC deaths account for 50 percent of all COVID deaths in Illinois since the start of the pandemic. 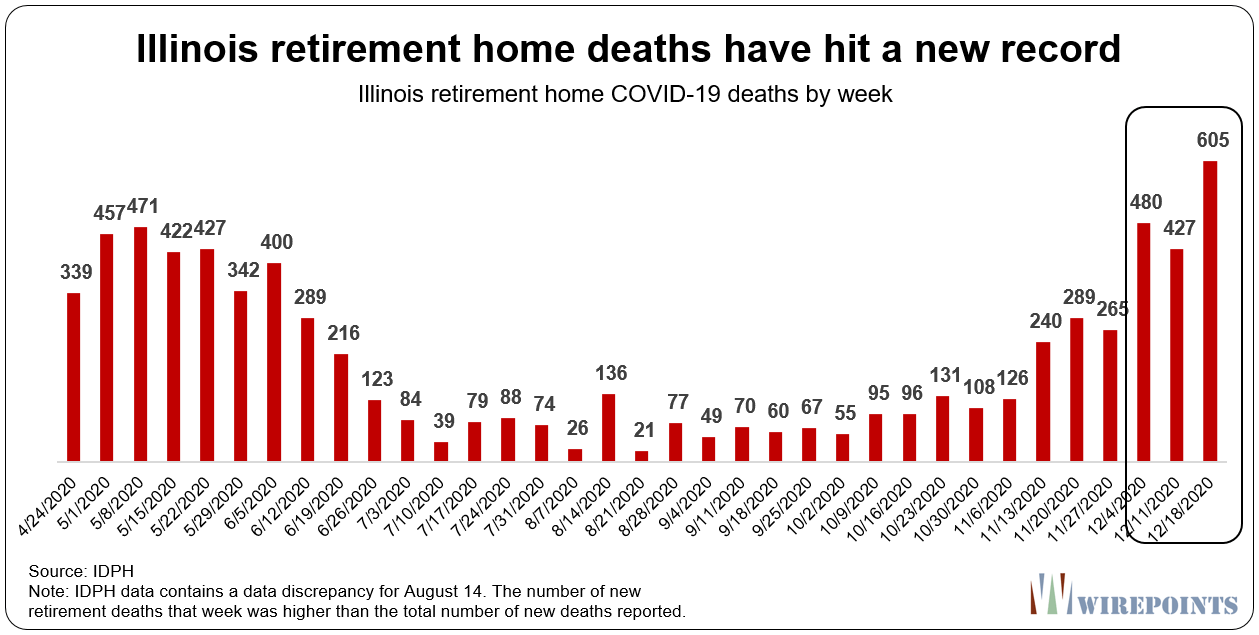 Illinois officials should have figured out how to secure these homes after nine months. As we wrote earlier, it’s not like officials don’t know who the potential victims are or where they live. IDPH has the full list of every LTC home and its address posted on its website. With a massive, concentrated effort in financial and health resources, thousands of lives could have been spared.

The LaSalle Veterans Home story by itself is a failure. COVID spread rapidly after it entered the facility, infecting at least 108 of 121 residents and killing 34 of them at last count. 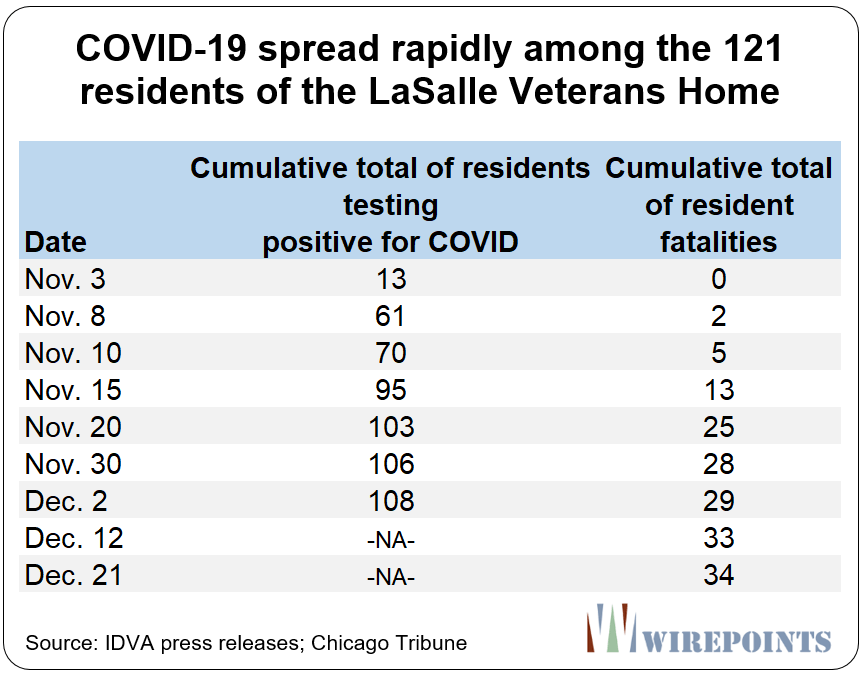 But the same story that’s played out at LaSalle has, in some form, played out across hundreds of other Illinois retirement facilities. So far, there have been 1,800 separate COVID outbreaks in LTC facilities across the state , with more than 250 outbreaks causing 10 or more deaths.*

When challenged in April as LTC deaths began to mount, Gov. Pritzker and state health officials signaled the state had the protocols in place, we wrote months ago. The governor said Illinois had “implemented strict measures” to protect nursing home residents and staff across the state.

Not only did the state fail to effectively protect retirement home residents from COVID, but it failed to protect them from neglect and abuse as well. According to an IDPH press release, its “Bureau of Long-Term Care was not properly processing and investigating complaints of abuse and neglect at long-term care facilities from approximately March 15 to June 30, 2020.”

The agency did announce a “top to bottom, independent review of its Bureau of Long-Term Care in the Office of Health Care Regulation” in response, but as far as we can tell the review was ineffective and the independent report was never made public. 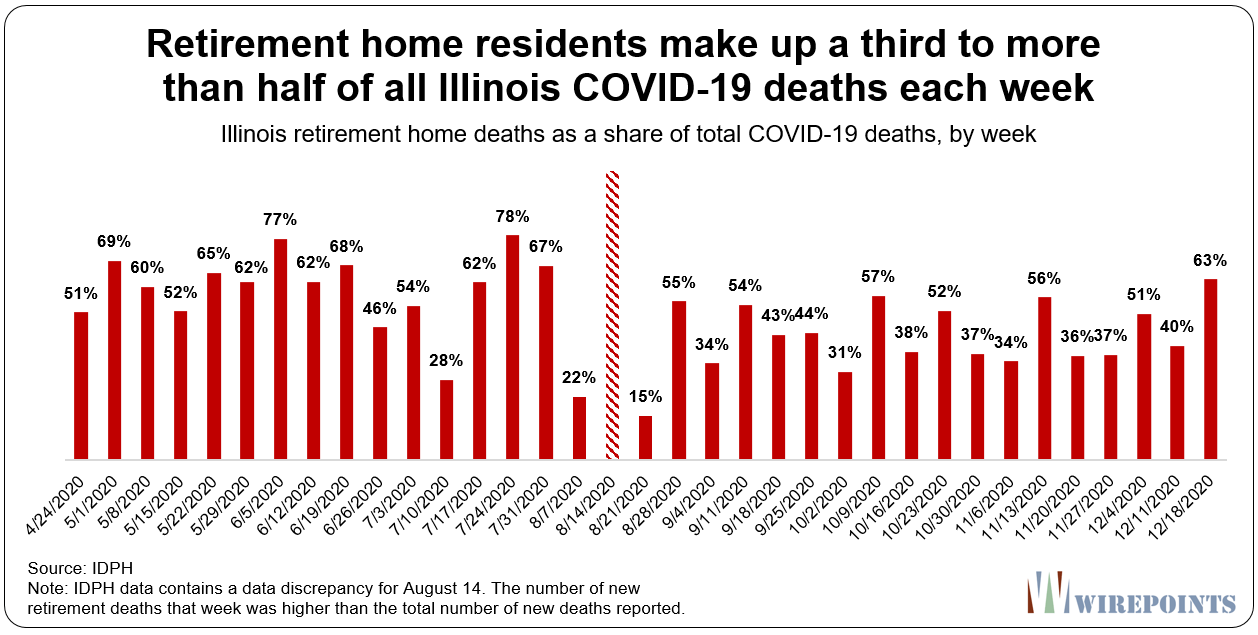 Illinois chose blanket closures and misguided attempts at controlling the virus, all the while failing to protect the most obvious targets of the virus.

Hopefully this nightmare for our most vulnerable will end soon after the vaccine is distributed, finally putting nursing home residents and their caregivers first.

Afterward, there must be reckoning among both private and public officials for the state’s failures. The same attention must be given to the rest of Illinois’ nursing homes as is being given to the LaSalle outbreak.

Read more about COVID in Illinois:

*Corrected 12/23. Language changed to reflect that there have been 1,800 separate outbreaks in LTC facilities, not that 1,800 individual facilities have suffered outbreaks.

Ted & John – Are those deaths by week of death or week of report?

TMK, none of IDPH death data for COVID is given by day or week of occurrence….which explains why there was a discrepancy in the week you noted in August.

Who knows! They are by the date of the state report but we have reason to believe that earlier deaths at least sometimes show up in the current day’s totals.

Yes, they do for sure.

CMS’ nursing home COVID deaths database has some flaws/issues as well, but per their latest update today, for the week ending 12/13/2020, the 700+ reporting facilities Illinois had 536 resident deaths–309 of which were with/from COVID. I have no idea if 536 deaths in a week in December is typical for IL nursing homes. But IDPH does. A nursing home administrator downstate told me this week that the system through which they report resident deaths requires them to say whether the resident ever tested positive for COVID. Options are binary (yes/no), with no option to say if the resident recovered.… Read more »

Nursing homes and hospitals receive additional funds as the result of a COVID-19 diagnosis, resulting in all sorts of unintended consequences.

Here is one example.

The ill patient goes to the hospital and gets assigned to a Covid-19 floor.

An attentive loved one complained to the hospital that the patient never tested positive for COVID-19.

How widespread is just that one scenario?

No one knows because it would take an inordinate amount of time and thus money to investigate.

By the way, the hospital sent the patient home.

Has anyone heard of someone dying from the flu? We are in flu season (sorry Covid season) and people should be sick from the flu at this time of year.

The Butcher of Springfield will never be held accountable for his mass slaughter of our most vulnerable residents. To do that would expose the lie that Big Government under democrats is flawless, always having the perfect solution to every problem and inconvenience

JB Pritzker rarely goes to Springfield. He will never accept responsibility for his actions. He’s a fraud. The people that vote for people like Pritzker are cut from the same cloth.

We have no idea how this year’s LTCF all-cause mortality compares to prior years. Given the unethically generous definition of a Covid death, high cycle threshold on PCR tests, and frequent testing of folks in these facilities it’s no wonder every LTCF death is milked for Covid.

Why can’t IDPH release basic data from 2015 onward on how & how many LTCF residents die each year?

yes-exactly, hard to know if Illinois is any worse than any other states for its management of LTCF? Is Illinois LTCF “excess death rate” since onset of covid any worse than any other states, would seem the key stat to make that determination/ argument? Found this on article (below) from back in November stating “excess death rate” at +15% at LTCF due to covid nationally. Does IDPH offer any stats on excess death rate at LTCF for this year or any other? maybe since JB’s so fond of pumping out the disaster covid stats, maybe he’s already provided those numbers?… Read more »

It would be most interesting to have a full picture of how meaningful these numbers are. How many non-covid deaths have occurred at long term facilities during the same time period? How many deaths (all causes) have occurred at LTF during the same time period of previous years? Without information to make comparisons, these numbers are pretty useless.

Sad part not one politician will be held accountable only way is if the people handle it through the courts some how some way. We all know Ezike and Pritzkers family members will never end up in a LTC because they have all the taxpayers money they stole from us to support their families. Both of you are frauds and you know it how can you look yourself in the mirror everyday and know your guilt.