A new report by the Tax Foundation shows Illinois’ competitive position would tumble if the progressive tax proposal on the state’s ballot in November is adopted. According to the nonprofit group, Illinois’ business competitiveness ranking would plummet to 47th from 36th, ahead of only New Jersey, California, and New York.

Gov. J.B. Pritzker’s proposed tax scheme would raise tax rates on all individuals making over $250,000 to as high as 7.99 percent from today’s flat rate of 4.95 percent.

In addition, Illinois’ proposed corporate tax rate, totaling 10.49 percent, would rise to the second-highest in the nation. That rate is made up of a 7.99 percent base rate plus what’s known as the Personal Property Replacement Tax (PPRT) of 2.5 percent. Illinois small businesses – partnerships and S corporations – also pay an additional PPRT, but at a lower 1.5 percent.

The Tax Foundation says Illinois “would have some of [the] country’s highest income taxes (individual and corporate), particularly on businesses. That’s of particular concern in a state that has struggled to stem the tide of business departures, as the governor himself has noted, but it’s only one of many issues raised by the proposal.”

The effect of those tax hikes would be to push Illinois’ competitive position on individual taxation to 40th from 13th and the state’s corporate tax position to 39th from 36th. Overall, the state would fall by 11 spots to 47th nationally. 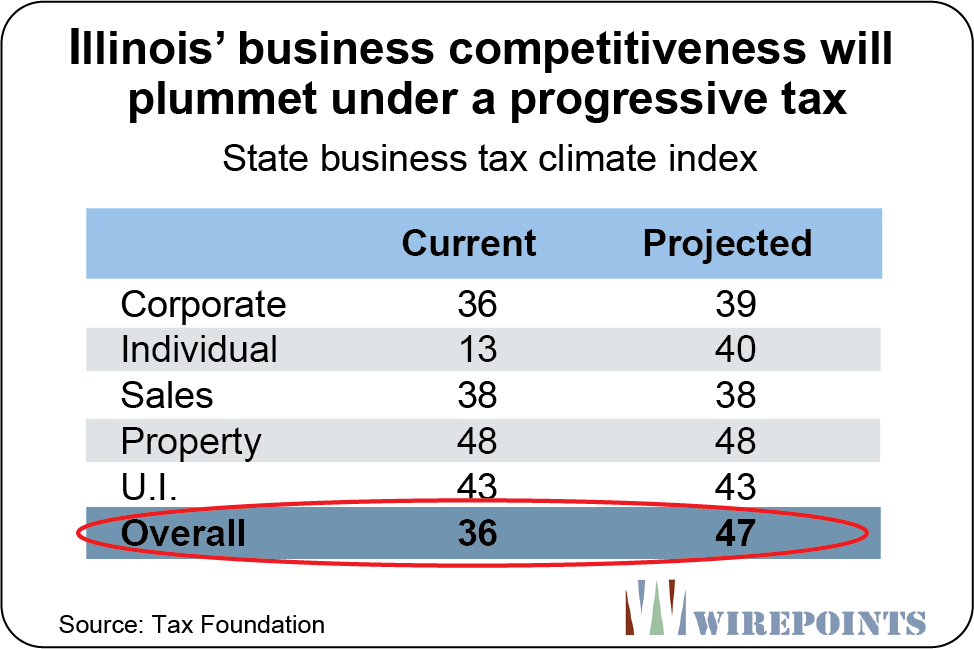 Included in the Tax Foundation’s report were 12 reasons why the progressive tax would hurt the state’s competitiveness. The bulleted list is here:

The report’s final warning shouldn’t be ignored: “Were the proposed graduated-rate income tax adopted, Illinois would trail its peers in just about every aspect of its tax code. If businesses and individuals are leaving the state now, these policies can only make the problem worse.”

“What me worry?”
Alfred E. Neuman
Just who should pay for the huge Illinois Debt?
The Next Generation that is not born yet?
It is time to pay down the debt, Cut spending and raise taxes. Have to do both big time for a long time. This is the worst hangover in the world.

I spilled COLA on myself. Wah wah.

The problems of Illinois always include or rather end with 2 words- CHICAGO and DEMOCRATS. If one looks at the red/blue map Illinois is shown as BLUE, but if you zoom into districts, Illinois becomes mostly RED except for Chicago and a small area east of St.Louis! The problem is ALL of the voters outside of Chicago could UNANIMOUSLY vote No and Chicago voting Yes will still win. IT’S A LOSING PROPOSITION ANYWAY YOU LOOK AT IT! And until Chicago and the Democrats realize that the pensions are killing this state, Illinois is doomed!

It would be nice if Illinois had a voting system similar to the electoral college so that the counties outside of Chicago had a vote. Something worth noting though is that years ago there was a saying that went something to the effect that “Downstate can never elect a Governor but it can keep someone from being a Governor.” With such little turnout downstate and the lack of being informed I don’t think the old saying holds any weight anymore.

Being from Southeastern IL I’ve often dreamed of our counties splitting away from IL and becoming part of Indiana. Chicago seems to despise us until we talk like that. Then they get their backs up and say,”No way No how!!”.

That’s just like owning all these mineral rights. Everybody down here doesn’t have a problem with “fracking” or “mining” but when we try to get it done there is always big protests and marches. Where do all the people come from? Not here! But from CHICAGO! And they don’t live anywhere near where the drilling or mining would be. So we sit down here in S.IL with millions in the ground and living paycheck to paycheck.

If counties were assigned “electoral college” voting points then Pritzker would have won by an even larger landslide during the last election. Cook, Dupage, Lake, Will, and Kane make up 64% of the population. He won all of those counties. When you add in St. Clair, Winnebago, Champaign, and Peoria Pritzker won counties that account for 72% of the states population. No matter how you slice it Pritzker would have won.

There were a unique set of circumstances that year. Illinois had no budget for a long time. Rauner drew the ire of conservatives some of the bills he approved.

You’re correct. A lot of people downstate like myself routinely refer to Cook County as Chicago. Actually you can add Lake County also. Maybe the I-91, I-80 Rectangle with the exception of a few minor precincts.

If they want a quick fix that doesn’t even involve voters it’s simple and fair.
Put a service tax/fee on any state pensions that are sent to out of state residents.
They worked and reaped the benefit of these benefits and they should be used in the state, if not there’s a 10% service fee. 10% of all former state employee’s retirement service fee tax.

No State may impose an income tax on any retirement income of an individual who is not a resident or domiciliary of such State (as determined under the laws of such State).

You would need to change federal law to make that happen. You would just need to convince all the states that are beneficiaries of pensioners spending income in their new state versus supporting taxing these pensions at their origin. Not going to happen.

Issue the pensioners state land / property equivalent in value to full pension payments, and be done with it. Their lot will therefore be tied to IL’s collective fate. Call them Lords, Dukes or Viscounts to make them feel privileged. Let them sort the clearing mechanism among themselves, so they don’t collectively crash land values trying to sell all at once. Will it be destructive to those receiving this payment, possibly. But no more so than the yoke being placed on IL taxpayers. And before you quote the hallowed IL constitution, where does it say what form of fiat has… Read more »

True enough, it seems to me. I like it at least.

That likely won’t work in that you are targeting state and local government retirees in IL rather than retirees generally. To that extent you want to diminish a goernmental retiree’s pension and have suggested a law to do so to that effect, something expressly currently forbidden by the Pension Protection Clause of the 1970 IL Constitution. Nice try, but no cigar.

The Quickest fix is a road map out of town.

The pension clause in the state constitution would never permit such a law to stand. It would be struck down by the state supreme court in a heartbeat.

You can not run a business in Chicago and still be competitive in the USA market.
You have 10% higher costs and can not pass them on.

1
Reply
Eugene on a pay phone

Pensions for public sector employees must be restructured. Property taxes must be lowered. The largest city in our state must get violent crime under control. Springfield must….! Never mind, my offer on the house in Valparaiso IN has been accepted!! Good bye!

7
Reply
LessonLearned
Reply to  Eugene on a pay phone

Congrats. Don’t forget to put your fist out the car window and extend a finger as you pass over the Illinois/Indiana border.

JB is in complete denial. Or he is just plain stupid. Not much of a choice is it?

No one in their right mind would start a business in Illinois.
You start off the first day in Debt to the pension obligations.
High Taxes and High Debt is not a place you want to start a business.
Many other States are much more business friendly.
Graduate College and work the rest of your life to pay off debt you had nothing to do with, not very smart is it.

Chicago Democrats seem to be daring people and companies to leave.

Not so. Very good reasons exist to oppose a progressive tax that would serve to perpetuate an already bad situation. Why would we bring more grief on ourselves?

Someone thinks that IL is currently 36? They must be on drugs….no way IL is in the Top 40

October 26, 2020
It's beggar-thy-neighbor policy at its stupidest. Instead of banning it, the state participates in it through its EDGE program.
View Comments (2) | Add Comment

October 26, 2020
Which amendment should be on the ballot, the progressive tax increase or pension reform? The silence of Fair Tax supporters tell us why they aren’t asking.
View Comments (22) | Add Comment

October 25, 2020
Jefferson's views about cities were not embraced by the nation for 230 years, but that may be changing. Most of his other views were held sacred, but that, sadly, is also changing. Time will soon tell which ones prevail.
View Comments (6) | Add Comment

ABOUT US
© Wirepoints Corp. 2012 - 2020. All rights reserved.
Contact us: admin@wirepoints.org
FOLLOW US
wpDiscuz
28
0
Would love your thoughts, please comment.x
()
x
| Reply