Illinois has the nation’s worst pension crisis, so it needs the boldest reforms in the nation.

But nothing has happened since the modest reform plan SB1 was struck down by the Illinois Supreme Court.

Today, Wirepoints introduces a new policy initiative: We call upon all legislative candidates and newly-elected legislators to pledge they will not accept a legislative pension.

Currently, lawmakers are conflicted from passing real reforms because they are beholden to a pension system that enriches them. It’s a system – along with the nation’s 5th highest salaries – that incentivizes lawmakers to become career politicians. 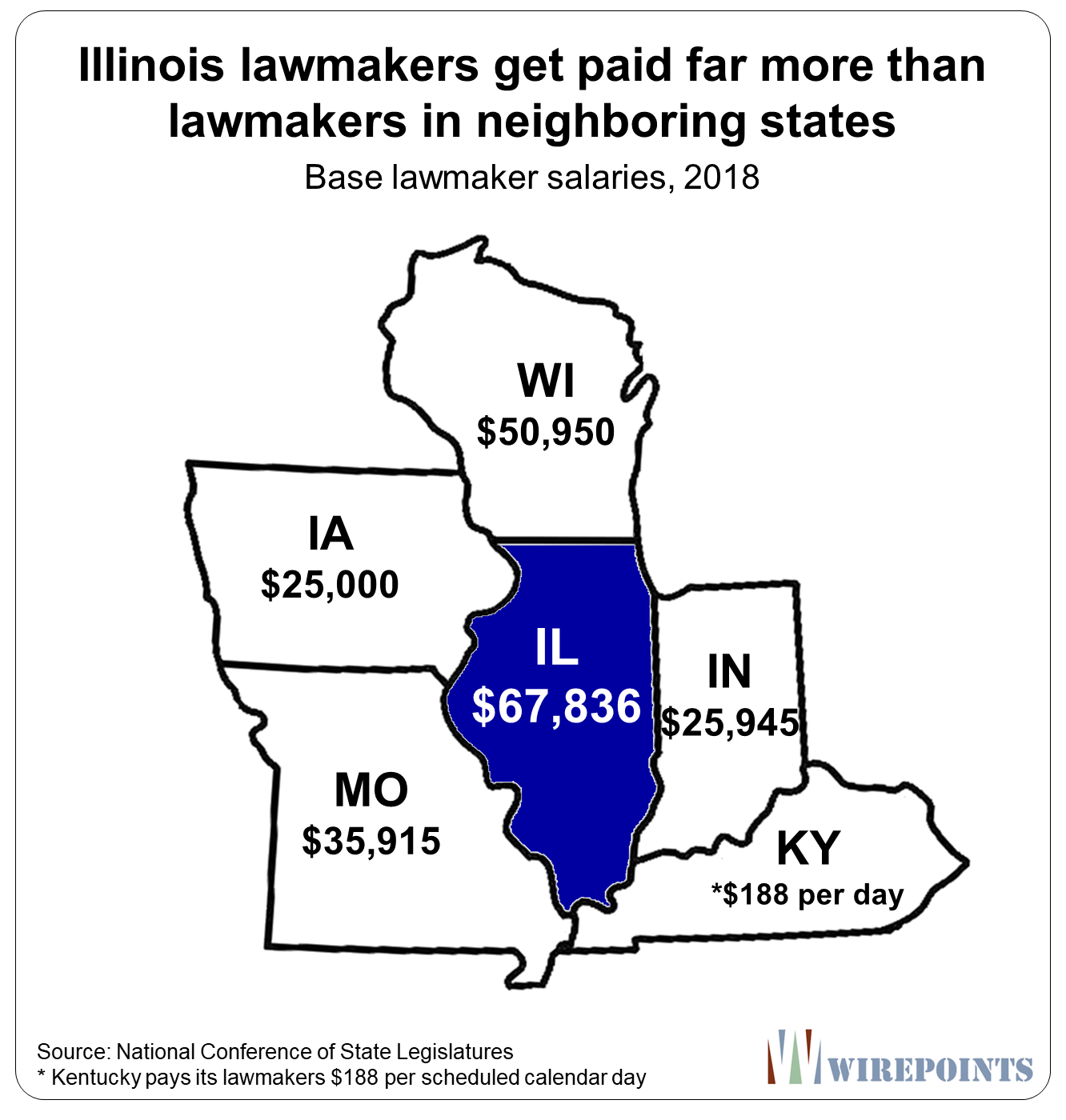 We don’t need career politicians. We need lawmakers who defend taxpayers and who are committed to making Illinois a more prosperous state.

Being an Illinois lawmaker is essentially a part-time position. The problem is the highest paid lawmakers are often the ones with the most lucrative private sector jobs. If you look at some of the positions many legislators hold, they’re enriching themselves in both the public and private sector.

It’s not fair that these politicians – these part-time public servants – receive a guaranteed retirement from taxpayers who have no guarantee themselves.

Worse, Illinois politicians haven’t done their jobs for years. They haven’t balanced the budget in nearly two decades. The state is just one notch from the embarrassment of a junk bond rating. No state has ever been rated junk before. And our pension systems are collapsing and threatening the solvency of the state.

What’s most galling of all is the system that legislators set up for themselves. The General Assembly Retirement System is the worst off fund in the state.

It’s just 15 percent funded. If GARS wasn’t bailed out by taxpayers each year, it would be bankrupt. It only has enough assets to last a little more than two years. Legislative pensions should be an embarrassment to each and every lawmaker.

Pensions are the state’s most urgent financial problem, and change starts with leadership. We need our newest legislators to not be beholden to the same system that’s created the mess in Illinois.

That’s why Wirepoints has put together a pledge that candidates can sign to show their commitment to bringing an end to legislative pensions.

We’re working with State Representatives Jeanne Ives and Tom Morrison, who for years have provided leadership in supporting pension reforms – and who themselves refused to accept a pension when they joined on – to identify candidates on both sides of the aisle who will make this commitment.

Fortunately, some courageous candidates have already signed the pledge:

They join about 50 other legislators who have already rejected a taxpayer-funded pension.

They should be commended. It’s an essential first step toward real reform.

Download a copy of the Pledge to Refuse a Legislative Pension 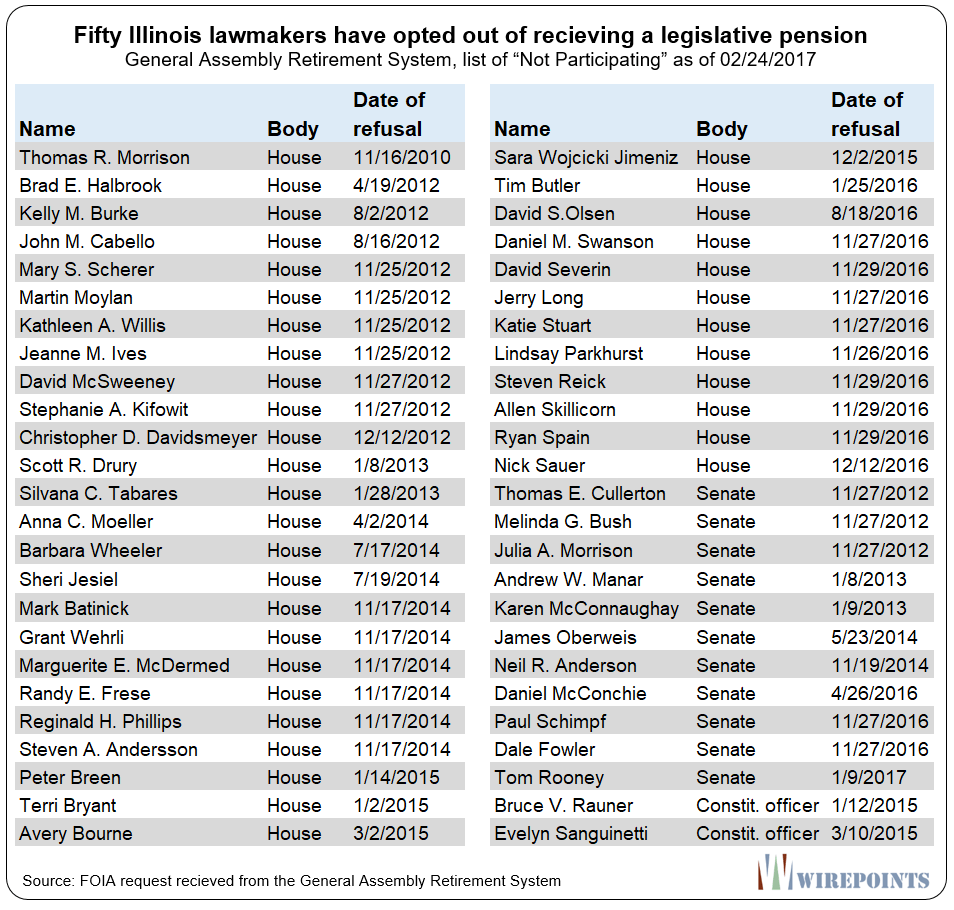 I have told people this for decades, we the people control the pensions of our legislature. Simply only give them one term, end of story.

To PM in the a.m., There is one of the very few ideas you’ve expressed on this website where I am in agreement; generally, I find your arguments too authoritarian and without any accepted-research basis, instead relying simply on your own hubris. But, here I can agree. The problem we have with IL’s elected officials is that they tend to want to make a career of it and, therefore, soon learn to prioritize their own feather-bedding maneuvers over working for the good of the public at large. Its only human to want to do that, I suppose, but where one’s… Read more »

If we had term limits, I bet most elected officials would opt out of pensions.

The senate and House people also need to include ALL their staff in the NO PENSION PLANS instead of making the state pension plan part of their employee percs. Remember what Madigan did with a part time employee.

A noble quest, but futile. The very reason most Democrats run is to get in on what the Machine is giving out. They need and want those checks, simply because they have never had private sector success. If they did, they wouldn’t be Democrats.

Almost 1 year ago, when I announced my candidacy for the IL House in the 101st District, I made almost exactly the same comments. If elected, I will not accept a salary or any benefits.

who are you running against?

For those politicians declining a pension, does the state contribute to social security instead?

Yes. From the GARS member handbook:
“If you choose not to participate in GARS, you are subject to mandatory social security coverage unless you contribute a minimum of 7.5% of your legislative salary to a qualified Deferred Compensation Plan.”

March 27, 2020
ProPublica was right to ask for hospitalization numbers, and so were we.
View Comments (13) | Add Comment

March 27, 2020
The Illinois Municipal League is angry, as they should be, about federal bailout money for Chicago as the only Illinois town or city to get federal aid.
View Comments (2) | Add Comment

March 27, 2020
The Coronavirus is a terrible crisis that threatens everyone, but the silver lining for many will be the clarity that only structural solutions can fix Illinois’ problems.
View Comments (11) | Add Comment

March 27, 2020
We need daily hospitalization numbers and we need them now, on both people currently in hospitals and those who have been released. There’s no excuse for not having them.
View Comments (18) | Add Comment

March 26, 2020
A revenue loss of $8 billion is a reasonable scenario – about 20% of the state budget – though it likely would be spread over several years.
View Comments (18) | Add Comment