It’s been nine years since the Great Recession. Stock markets are at all time highs. The national economy is booming. Minority unemployment is at record lows. Even Illinois is riding the nation’s coattails with a record low unemployment rate of 3.9 percent.

If Illinois can’t help get single, childless, able-bodied Illinoisans back into meaningful work and off of food stamps now, then when?

That’s the question Illinois politicians and policy makers should be asking themselves in the face of in the face of new federal rules for single, able-bodied citizens currently on food stamps. The changes restrict the ability of states like Illinois to continue waiving the program’s work requirements, meaning nearly 700,000 current recipients nationally will have to work or be in training at least 20 hours a week to continue to receive benefits. In Illinois, the number affected is estimated to be between 90,000 and 140,000 people.

But Illinois pols don’t seem to be interested in that question. Instead, they are busy defending why Illinois should continue to exempt able-bodied residents from the part-time work or training requirements. Gov. Pritzker called the waiver changes “cruel” and “denying food to the most vulnerable people in our society.”

The only thing that’s changing are the rules that allow states to get a waiver from those work requirements (see accompanying box for details). 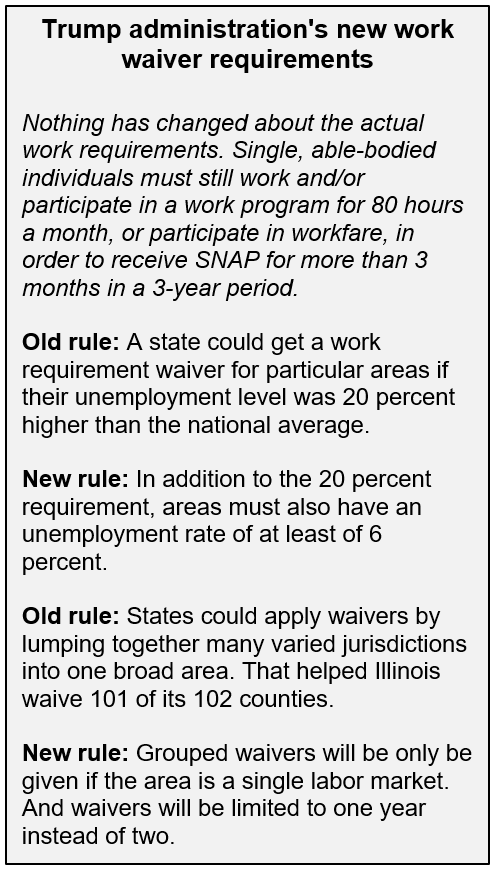 Second, Pritzker is ignoring the fact that every one of Illinois’ neighbors has shrunk its food stamp enrollment down to where it was a decade ago, or far lower. In contrast, Illinois’ enrollment has gone up.

Meanwhile, Illinois has added 250,000 residents to its rolls, up 17 percent, since 2009. Illinois has headed entirely in the wrong direction. 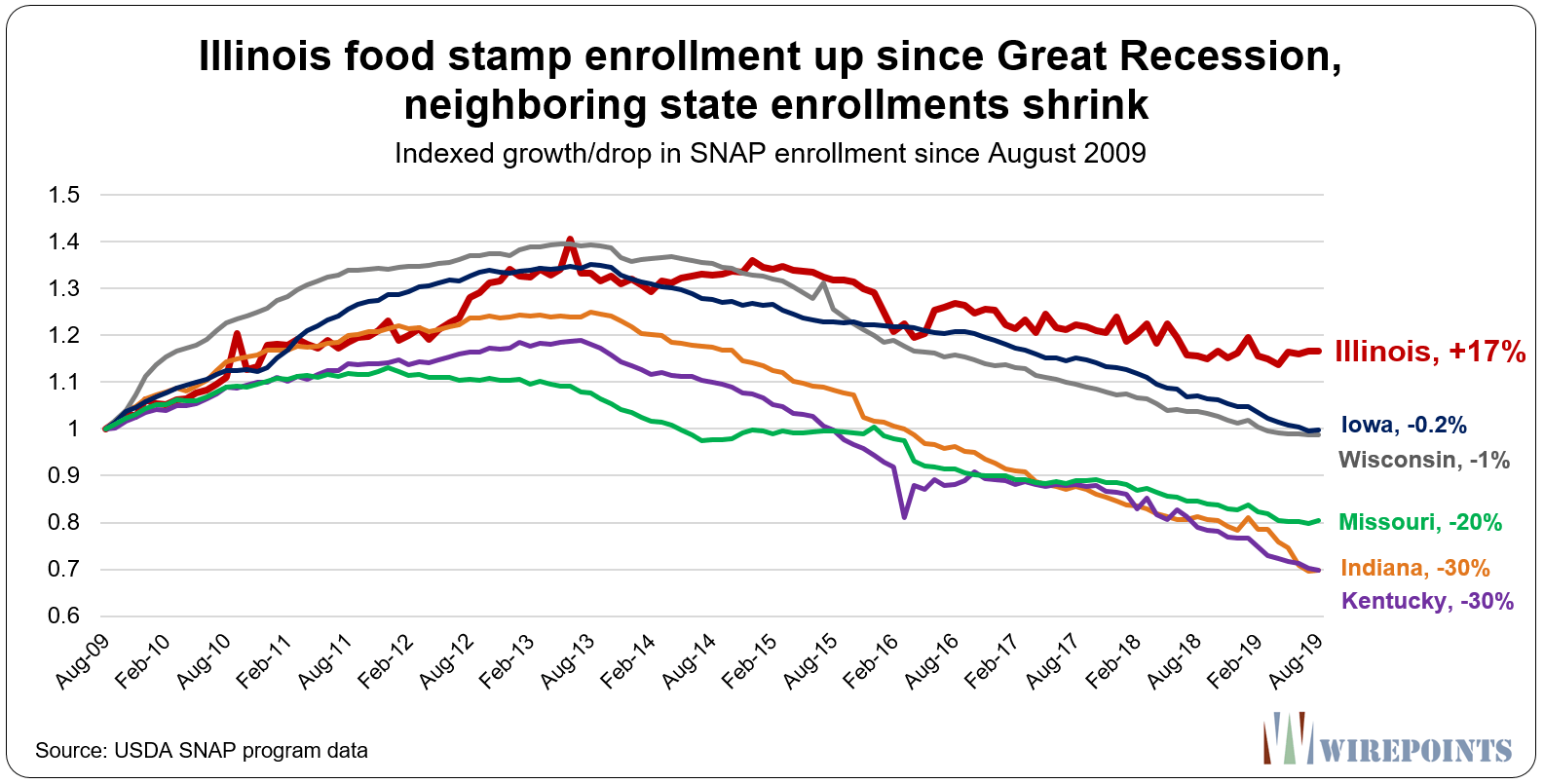 In fact, Illinoisans’ continued participation in SNAP is an outlier compared to most states. About 14 percent of all Illinois residents are enrolled in food stamps, which is the 7th-highest participation rate in the nation.

And contrary to what Pritzker and others may think, our neighbors’ reduction in SNAP enrollment hasn’t resulted in joblessness and “cruelty.” All of them except Kentucky have managed to drop their unemployment rates to levels below that of Illinois. 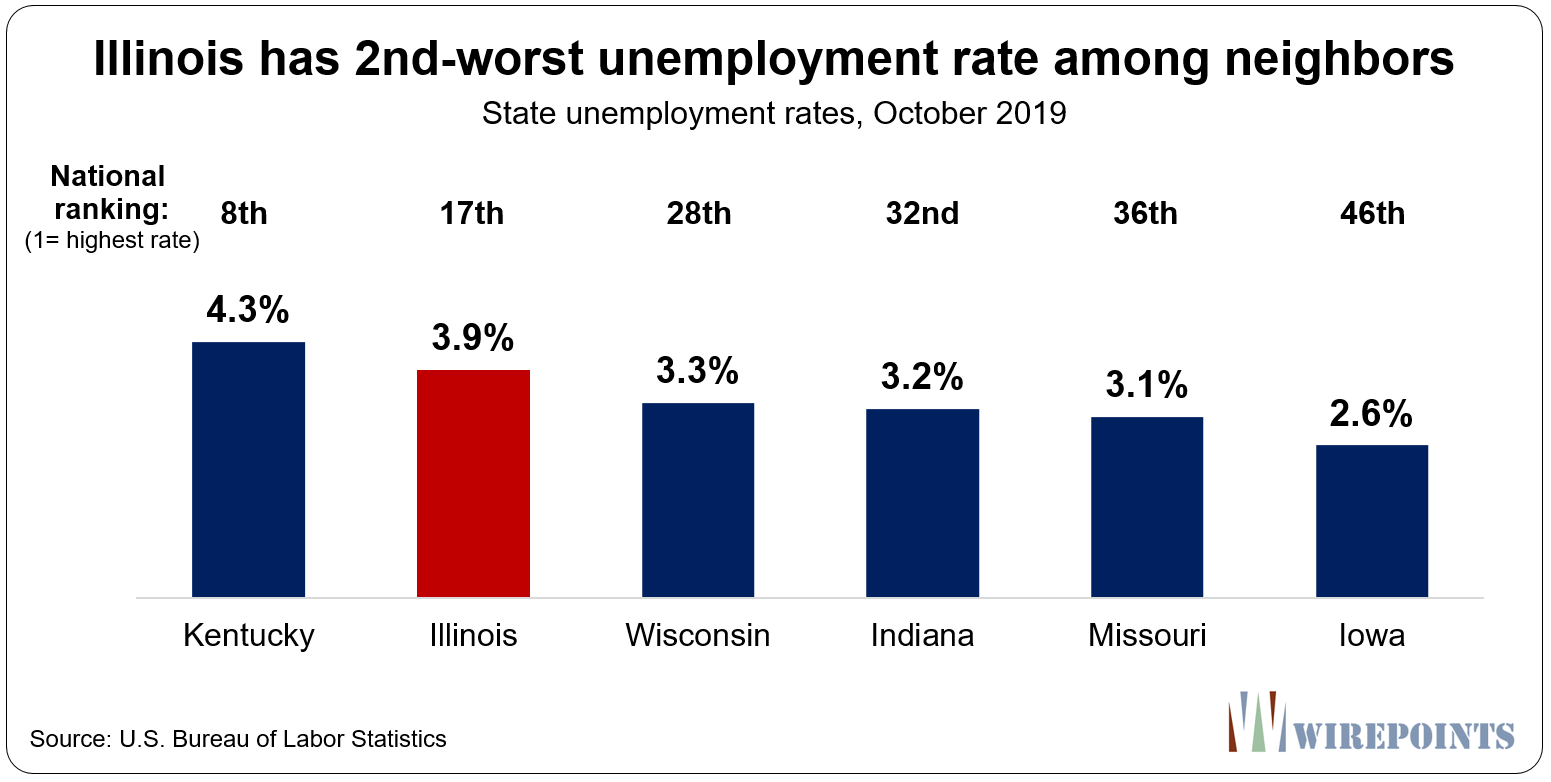 Instead of protesting, Illinois politicians should treat the Trump administration’s changes as impetus to help as many single, able-bodied Illinoisans as possible get off SNAP and into meaningful employment or training programs.

More position-matching could help, as there are jobs waiting to be filled in Illinois. The U.S. Bureau of Labor Statistics reports there are over 7 million unfilled jobs across the country. Based on share of population, Illinois would have about 300,000 of those unfilled jobs.

If Pritzker really wants to champion the residents who rely on food stamps, he would focus on passing the economic and spending reforms that would create hundreds of thousands of more jobs, helping lift those people out of government dependency.

Instead, his only plan is a slew of higher taxes on Illinoisans and job creators.

See Wirepoints discuss Illinois’ food stamp enrollment on Chicago Tonight: “This is about as good as it gets when it comes to the economy and jobs. We’re at a 50-year low in unemployment. This is the moment to get people into meaningful work and off food stamps.” – Ted Dabrowski on Chicago Tonight 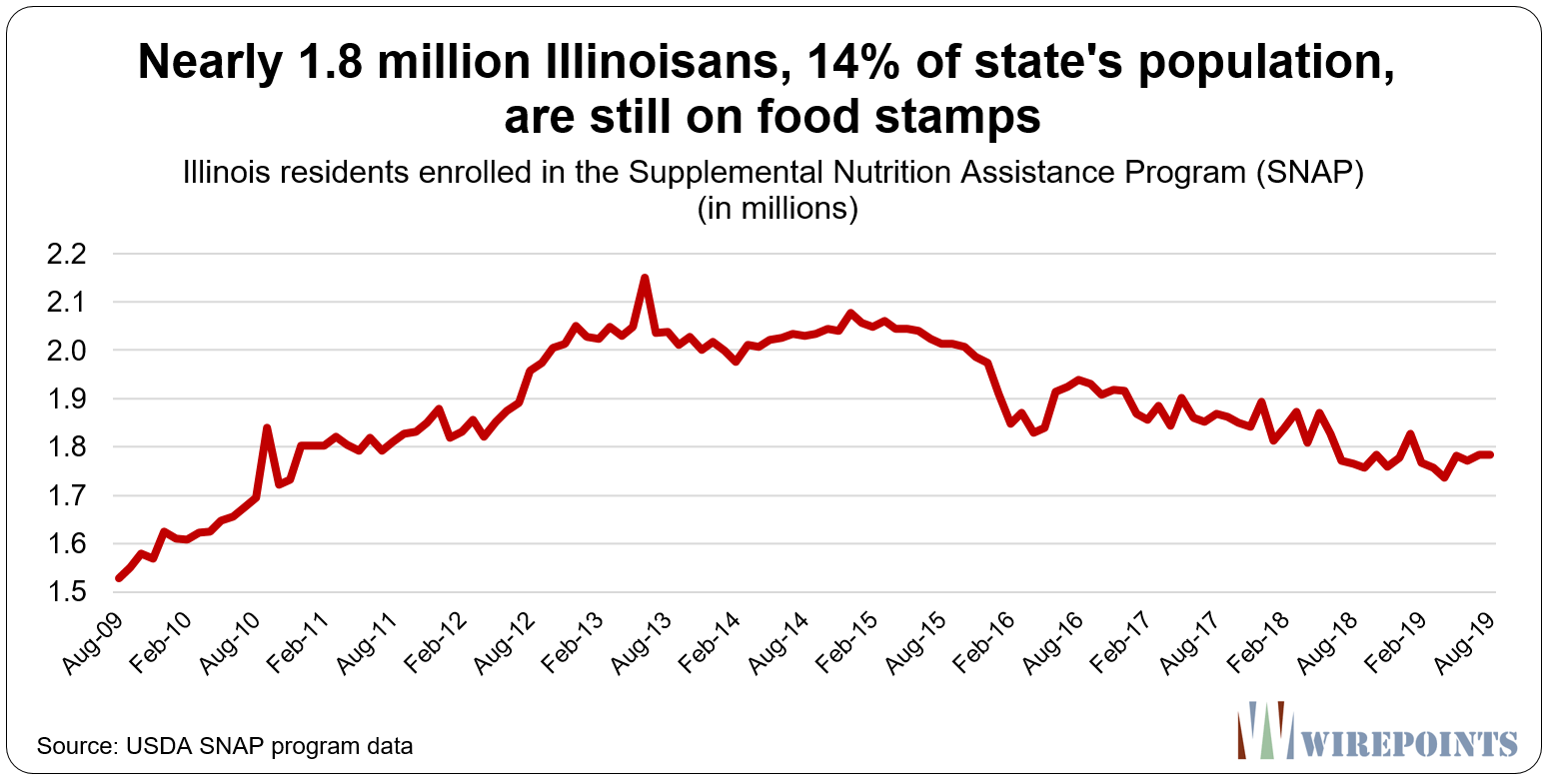 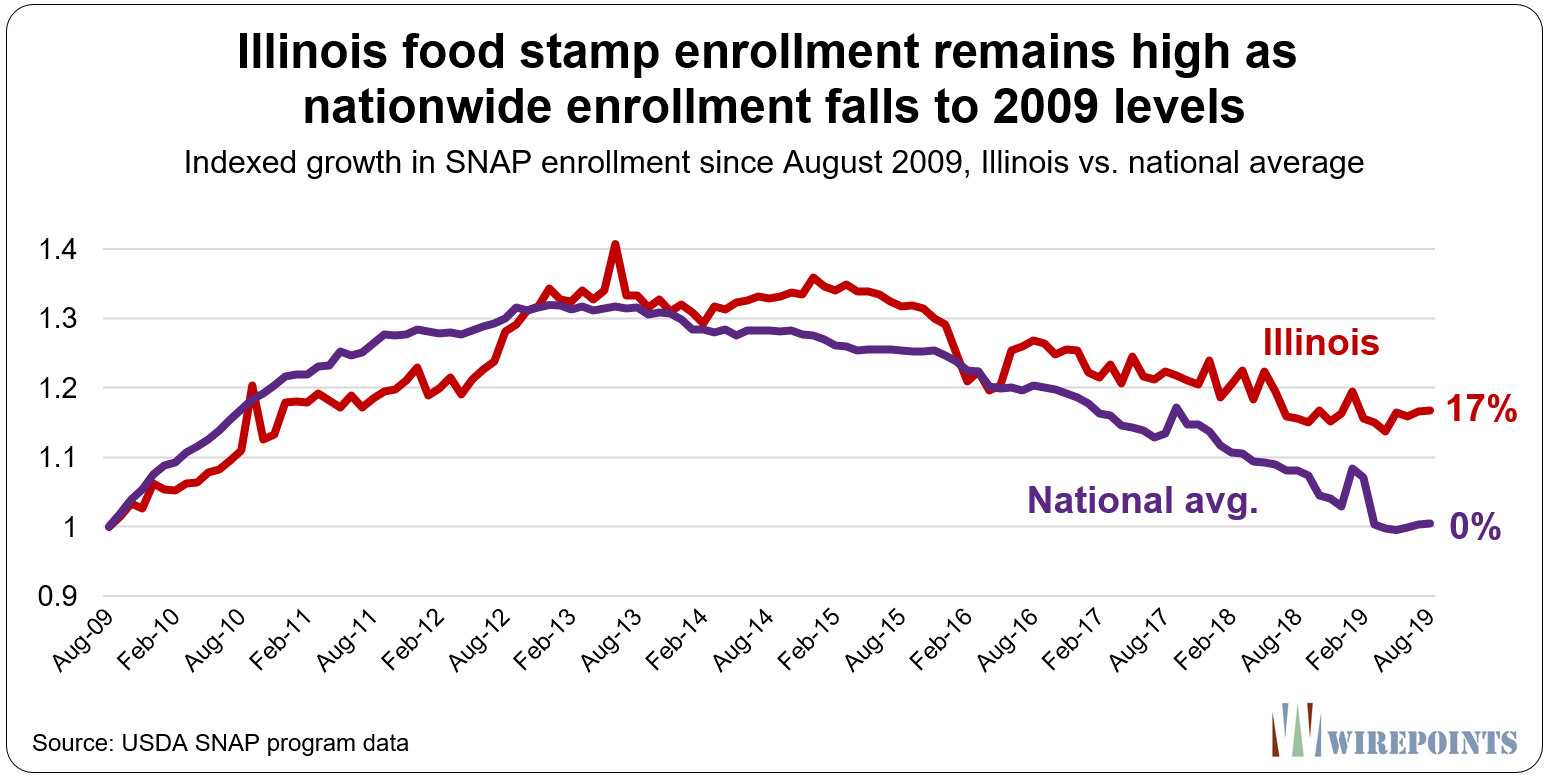 when I was growing up My Mother would say” If wishes were Horses Beggars would ride ” Pritzker new taxes will stop any business from wanting to come to Illinois and the ones already here will leave, soon Pritzker will be give money for horses to the people who refuse to work,like our 5 foot tall 5 foot wide governor would say, they should have a Pet too !” Illinois is the Titanic and Pritzker is the Iceberg” ! By Ray Milligan

Vote Up1Vote Down
Governor of Alderaan

It’s true that the stock market is at all-time highs, but people who chose not to own stocks didn’t participate in stock’s gains. That’s not fair!

Up 17 percent since 2009? Maybe that increase is to support all the illegal aliens entering the sanctuary State and residing in former middle class areas in sanctuary cities in Illinois so they can illegally vote for the democratic presidential candidate (Mr. Magoo) in 2020. Just saying…

The result of J.B.’s higher taxes will be job loss cause businesses will close and head to other low tax states. Let’s not forget the$15 wage hike people voted for that will also hurt small businesses.

80% of SNAP families had at least one working adult in the past 12 months.

Based on the Census Bureau definition, family consists of a householder and one or more other people living in the same household who are related to the householder by birth, marriage, or adoption.

So tired of our Illinois politicians not trying to help people improve their lives . The more handouts we give the more people become dependent and less productive. There has to be some incentives for people to get off their asses and be productive citizens. Letting them get help without working for it is a real disservice to our state and especially to the recipients themselves. There is no such thing as a free lunch PERIOD.

Illinois is the Titanic and Pritzker is the “Big Fat IceBerg ” ! By Ray Milligan

you are confusing them with being rational.

They fear someone who gets a job may become corrupted into a Republican.

The best day of your life is the day you move out of Illinois. A U-Haul will solve the problem. Call a mover today and start a better life for you and your family. Illinois is DOA, no hope. Even the cops, firemen and teachers with the HUGE PENSIONS are running out of Illinois.
Last man standing will be a dead man. 83 Degrees and Sunny in South Florida, NO state income taxes. Freeze you a$$ off in poverty or start a great new life.

Hay poor tax payer that is what we have done,One of the few moves in my life that was 100% no regret.You whole life is a lot better.