Not even the nation’s longest-ever bull market run has been able to save Illinois’ crumbling pension funds.

Despite a tripling in the value of the S&P 500 index since July 2009, Illinois’ pension shortfall has worsened by 75 percent during the same period.

In 2009, the shortfall in Illinois’ five state-run funds stood at “just” $78 billion. Today, the funding hole is at a record $137 billion, a $59 billion increase. That’s according to preliminary actuarial reports recently released by the state pension funds.

The warning this trend provides is stark: if pension debts in Illinois continue to grow during a period of remarkable stock market returns, imagine how those funds will fare when the next recession inevitably hits. 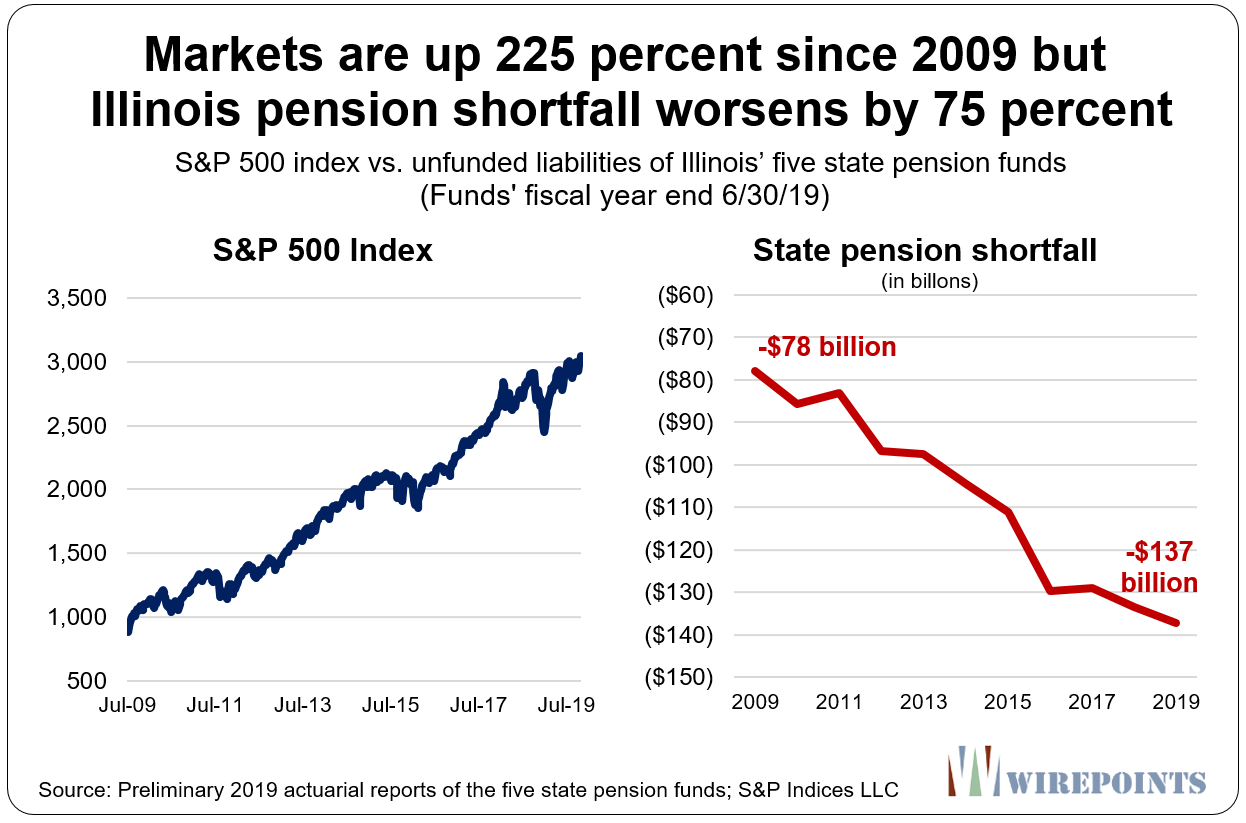 The state’s overwhelming pension costs are leaving no Illinoisans unscathed. The state’s total combined state and local taxes, adjusted for cost of living, are now the third-highest in the country, according to Wallethub. Home values, adjusted for inflation, are negative and bucking the upward trend in the rest of the nation. And core services are being cut to make room for contributions to the pension funds. Pension costs already consume more than 25 percent of the state’s general fund budget. No other state in the country spends that much on pensions.

At just 38 percent funded, only Kentucky (34 percent) and New Jersey (36 percent) have worse-funded pensions than Illinois, according to the Pew Charitable Trusts’ most recent state-by-state comparison.

Chicago has suffered the same downhill trend as the state, but it’s problems are far more acute.

The city’s pension hole – what it owes to police, firefighters, laborers, municipal workers and teachers – deepened by 150 percent over the decade even as markets gained ground. 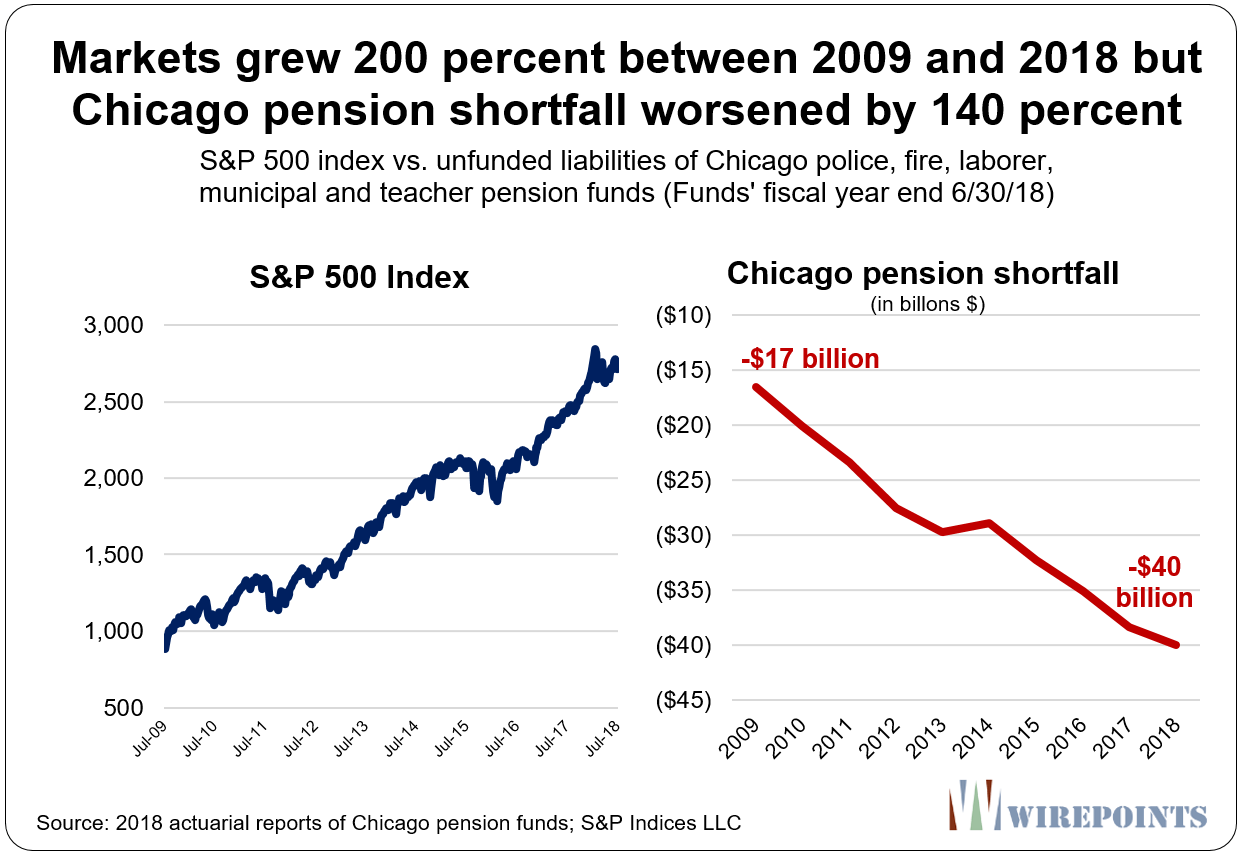 Several funds in Chicago are already in danger of running out of money entirely. The firefighter’s pension fund, for example, is just 18 percent funded. Its assets only cover a little over three years of benefit payouts.

The city’s police and municipal funds aren’t much better off, at just 25 percent funded. Without fresh contributions, both only have enough assets to cover about four years of benefits. 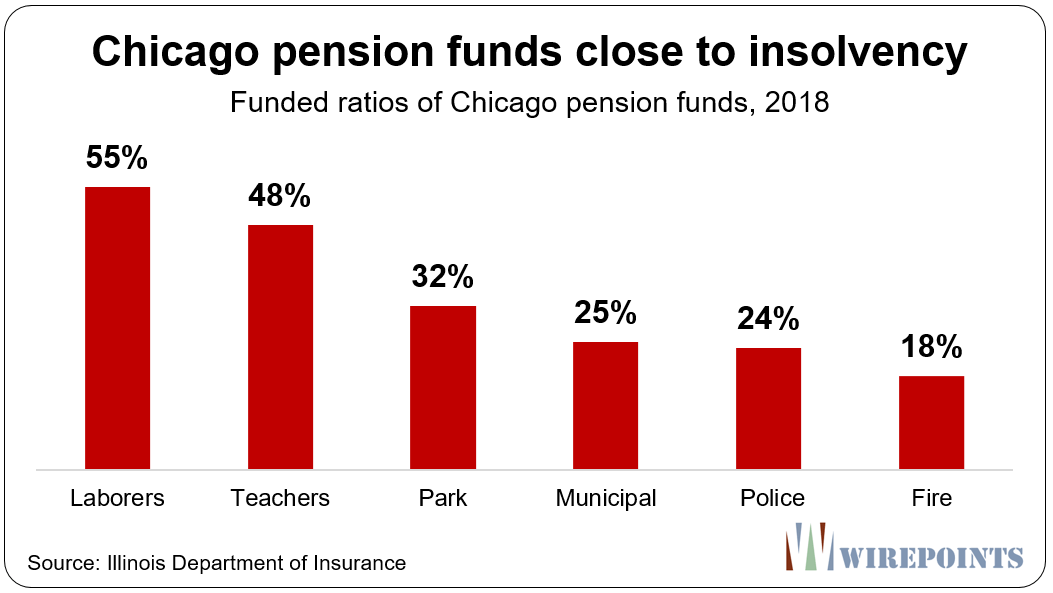 Current retirees will suffer from any collapse – their monthly pension checks could fail to arrive.

It’s important to note that the official numbers provided by state and Chicago officials above significantly understate the true pension shortfalls in Illinois.

Moody’s Investor Service recently released their 2018 calculations of state debt. Under the agency’s more realistic assumptions, Illinois owes over $241 billion in state pension debt – the most in the nation.

And Chicagoans –  when you add up all of Moody’s calculated city, state and other local debts – are on the hook for $150 billion in overlapping retirement shortfalls.

Politicians are trying to hang onto the status quo, hoping that massive tax hikes, whether its a progressive tax at the state level or higher property taxes in Chicago, will keep the plans afloat. It’s a fool’s game.

Illinois has shrunk four years in a row as record numbers of Illinoisans flee the state. Illinois has lost more people to out-migration since 2000 than any other state in the nation save New York.

Illinoisans are now on the hook for more government-worker pension debts than any other state in the country, and more than they can ever repay. But watch out. Without reforms that significantly reduce those debts, expect things to get worse. The burden will grow as more and more Illinoisans flee.

*Cover image by Mediamodifier from Pixabay

The best day of your life is the day you move out of Illinois. A U-Haul will solve the problem. Call a mover today and start a better life for you and your family. Illinois is DOA, no hope. Even the cops, firemen and teachers with the HUGE PENSIONS are running out of Illinois.
Last man standing will be a dead man. 83 Degrees and Sunny in South Florida, NO state income taxes. Freeze you a$$ of in poverty or start a great new life.

Just wait until the next recession. Armed with a new progressive income tax, Madigan and JB will take us for everything we got. Expect California or New Jersey style income tax rates with the highest property taxes in the country

Just make sure that the firefighters get theirs!

Pension “shortfalls” can be considered involuntary loans, from the pensions, to legislators who spend the money on roads, new curtains in their offices, make-work programs administered by their friends and families, etc. The funny thing is, the 300% ramp in stocks is NOTHING compared to to the nominal increase in total debt during the same period. This entire economic “system” is literally a pyramid scheme, where money (which is debt in a fiat-money environment) is conjured out of thin air, loaned into existence, and then used as collateral for MORE BORROWING!! Debt-as-collateral for more borrowing…think about that for a while….… Read more »

Question? Are the survivor benefits calculated in the pension and healthcare underfunding or is it just the pension of the recipient based on the actuarial tables? Example a 55 year old about to retire marries someone 20 or so years younger does the spouse receive lifetime benefits upon death of the recipient ? I know of people not getting married or just living together to keep getting survivor benefits from their deceased spouse. Are we the taxpayers then responsible for the 35 year old benefits for life as long as requirements are made like not remarrying? If not survivor benefits… Read more »

Why the great disparity between what Moody’s says and the city and state? Moody’s says 241 billion, while the number 130 billion for the state is always used. That’s 111 billion difference, which seems like it could be a little more than a minor accounting difference.

The discount rate used for future liabilities is quite different. The state uses 7 percent, while Moody’s is more market based, around 4 percent. Others like Joshua Rauh at Hoover are using even lower rates, so they have the unfunded liability even higher.

Moody’s has Never saved nor helped anyone from losing big on credit risk, whatever they say it is in reality much worse!

I think the biggest fallacy is using not using 2 different discount rates, one for the obligations which are known and certain (much lower rate), and one for the uncertain and risky returns on assets (much higher discount rate). The could easily project a net pension debt over $600 Billion! In a few years approaching a Trillion, just for good ole corrupt Illinois!

Tut-tut, Doug. You are supposed to ignore the boiler-plate “Past returns are not promises of future profits.” (sarcasm off) I concur with you. The debt bomb is a worldwide phenomenon, and it has already obtained BIBLICAL proportion, larger than an fictional asteroid that supposedly wiped out the dinosaurs (over an ensuing couple million years, of course.) A veritable OCEAN of debt was issued these last near-40 years, and it rests on nothing at all but collective trust. One day, perhaps soon, perhaps not for a while, Pollyanna will awaken from her stoned-to-somnolence stupor and she’ll realize that the value of… Read more »

You can do anything with accounting.

This site contends Illinois needs a constitutional amendment to fix the pension mess, Illinois biggest problem. I simply contend that Illinois can’t be fixed. Look around the country. There is a very strong correlation between the political party controlling each state and their financial health. Conservative/Republican states generally control the 10 most fiscally responsible states. Coincidence? Why then is the reverse also generally true? Only 3 of the worst 10 performing states can be classified as Conservative/Republican. It’s seems fair to say that liberal/Democratic control of Illinois is destroying the state. A majority of the Illinois voters consistently endorse liberal… Read more »

11
Bob out of here
Reply to  DantheMan

I was telling someone last week about how I would pick up pennies on ground at El station and how the city would peg me as a conservative via their cameras posted there since I would pick them up. Probably a setup to assess your ideology. I told him the difference between a conservative and a liberal is the conservative picks up pennies because we appreciate the value of money and the liberal demands some of mine because I have more pennies than he does.
Instead of resenting successful people, why not strive to be successful like they are?

8
Astonished
Reply to  Bob out of here

Sanity could be defined as the degree of agreement between what one believes and actual, underlying reality. Leftist’s (my preferred term) beliefs are an ersatz religion, and they have very little parallel to how reality actually works. Then along came the post-modernists, who waved this truth away by positing that each of us has our own reality, defined by our sex, our “gender identity,” our race (even though they also claim that’s a social construct), etc. In the end, our reality is now far too complex for most people to even comprehend a child’s over-simplification of it, so people are… Read more »

To add to your depressing scenario, I think that even if a constitutional amendment were enacted to diminish pensions and health care benefits, the pols wouldn’t diminish them by much; so, the taxpayer wouldn’t get much relief after all. That would seem to be yet another reason not to stick around waiting for some magical turnaround.

Absolutely. I would not expect taxes to go down. Best case they stay the same and the state continues to loose population.

Kentucky problems were caused by Democrats, they voted out the one guy actually trying to solve the problems.