The poor results highlight the long-term trend of rising shortfalls and increasing costs that have plagued the state for decades. Last year the state shortfall totaled $134 billion and pension costs equaled $9.4 billion.

Illinois’ official unfunded liability for the five state funds – for teachers, state workers, university employees, judges and lawmakers – has grown by $120 billion since 2000, largely the result of some of the nation’s fastest growing pension benefits. Illinois retirement costs now consume more than 25 percent of the state’s budget, the highest of any state in the nation.

The state’s 2019 pension shortfall increased even though Illinoisans poured more money into pensions than ever before. Illinoisans contributed over $10.1 billion to pay for state pensions and the debt service on pension obligation bonds. Pension costs have grown by 7 percent annually since 2011, more than four times the rate of inflation. 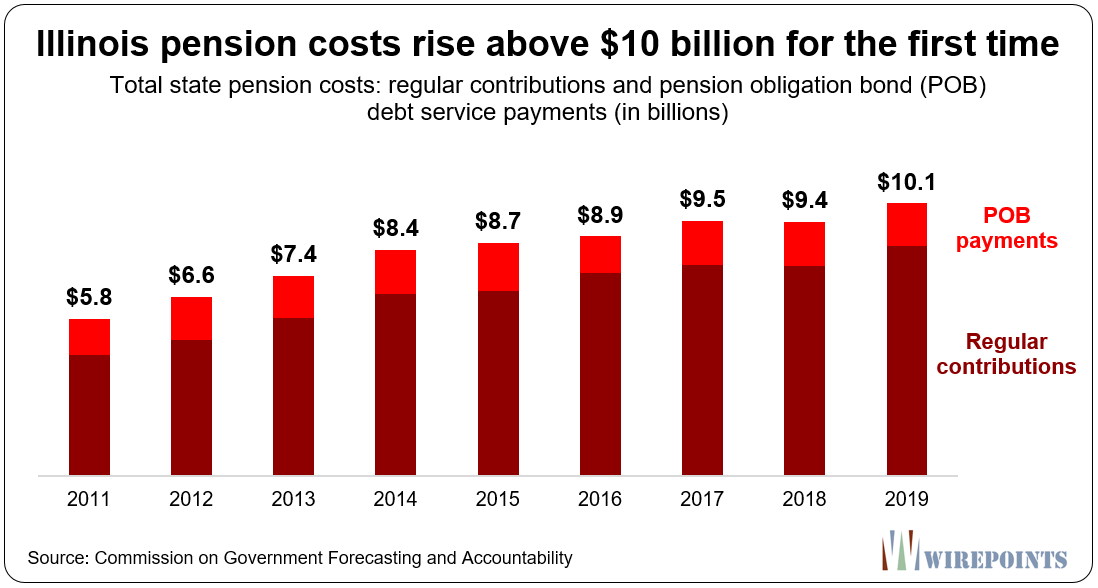 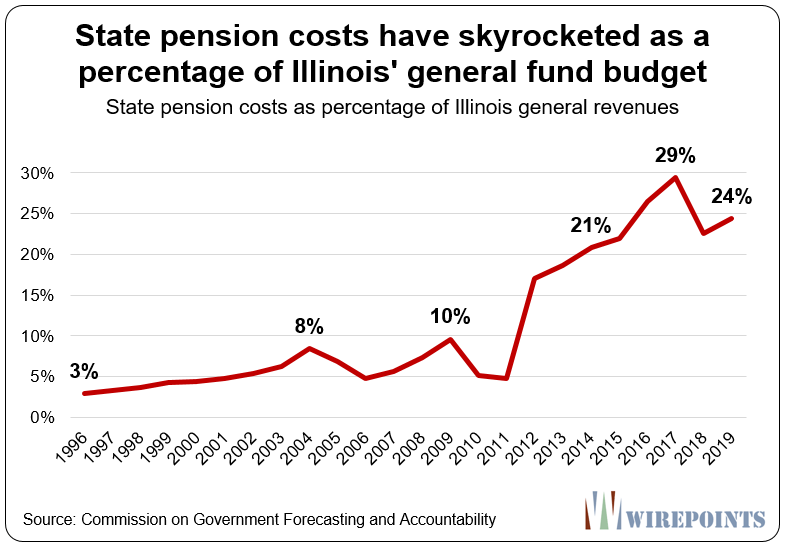 When that budget statistic is compared to other states, Illinois jumps out as the nation’s extreme outlier. JP Morgan recently analyzed pension costs across all states and found no other state has the pension burden that Illinois has. Illinois’ quarter-of-budget consumed by retirements is even worse when compared to its neighbors. Kentucky’s retirement costs consume 13 percent of its budget – half of Illinois’ level. Indiana is at 6 percent. And Iowa’s costs are just 4 percent of budget, six times smaller than in Illinois.

Lawmakers and the unions blame Illinois’ current pension crisis on the underfunding of pensions. But Wirepoints’ research finds Illinois’ state pension funds are in crisis today because of 30 years of uncontrolled benefit growth, not a lack of taxpayer contributions. Those findings are in our report, Illinois state pensions: Overpromised, not underfunded.

A national comparison of more recent data from the Pew Charitable Trusts makes the point clear. Illinois’ accrued liabilities – its total pension promises – have grown faster than almost every other state in the country since 2003. Wirepoints’ 50-state analysis of pension promises showed Illinois had the 4th-fastest growing accrued liabilities of any state between 2003 and 2016. Those findings are in our report, Overpromising has crippled public pensions: A 50-state survey.

That growth in benefits has made it impossible for Illinois to escape the pension crisis. Investment returns and growing taxpayer contributions aren’t enough to fix things so long as politicians refuse to do anything about the growth in pension benefits and the overwhelming pension debt burden that’s already been accrued.

The need for reform

The legislature’s failure to pursue an amendment to the Illinois Constitution’s pension protection clause is perpetuating Illinois’ extreme outlier status and wreaking havoc on the lives of ordinary Illinoisians.

Illinois’ combined state and local taxes are the third-highest in the country. Real home values have shrunk, making Illinois one of the worst states in the country to own property. And all that’s driving people away. Illinois has the nation’s second-worst out-migration rate.

Collectively, the five pension systems have just 40 percent of the funds they need today to be able to meet their obligations in the future, the same as the year before. The university employee fund, SURS, is the best off of the five pension funds at 42 percent funded.

Most notable is the funding ratio of the General Assembly Retirement System which serves state lawmakers. It’s just 16 percent funded. It’s broke any way you measure it. Only a yearly bailout by taxpayers keeps that plan afloat. 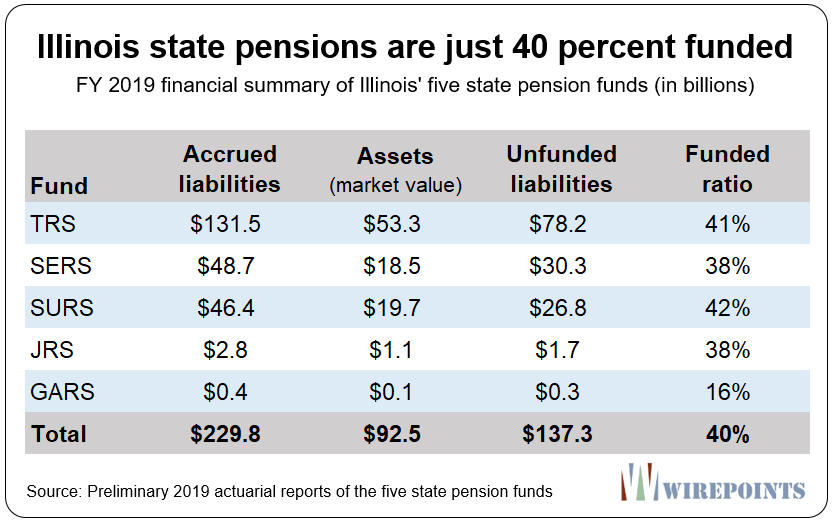 I keep reading about Moody’s estimate of our liabilities at $250 Billion. Moody’s uses a different discount rate. Does anyone know what discount rate Moody uses to measure our pension liabilities. Some experts are recommending a rate as low as 3%.

— AG joins 00004000 lawsuit against federal limits to CA’s regulatory powers: “California’s ability to regulate the pollution limits of cars and light trucks should not be limited by the federal government, Illinois’ top lawyer argued in a joint court filing Friday, because those standards positively impact the health of his constituents. Attorney General Kwame Raoul joined a group of 22 other states, the District of Columbia and two cities in suing the federal government after it moved Thursday to revoke the most populous state’s ability to set stricter emission specifications than those required by President Donald Trump’s Administration,” reports… Read more »

Kwame’s life work – bowing down to the losers in California.

Surprised he doesn’t have Orange Man Bad at the top of the AG’s website.

Just as a comparison. Does anyone know what the outstanding total mortgage debt is in Illinois? Also student loan and auto loan debt is? Reason is that we owe that debt because it was our decision to incur it. We can renegotiate our debt at anytime when appropriate to reduce our long term liabilities? Does Springfield renegotiate taxpayers debt ? NO! Now add to that total $$ amount we also owe (somewhere around $278B) for public employees pensions and lifetime healthcare. We the taxpayers never signed any contracts to agree to that. The recipients (unions and members) did by getting… Read more »

Illinois is toast, a goner. DOA, there is no hope at all.
Run for your economic life as fast as you can.
The best day of your life will be when you move out of Illinois.
Anywhere is better than Illinois.

Solve the Problem (Big Problem) with a U-HAUL.
Run for your economic life. Life is too short to be robbed by GREEDY Government employees.
Florida has ZERO INCOME TAXES AND MUCH, MUCH, MUCH BETTER WEATHER.
So stay in Illinois and pay, pay and pay and Freeze you “A$$” OFF.

Hi kids,
Just a friendly reminder:
When you cross the Illinois border in a moving van, you won’t owe one red cent on those ridiculous and obscene pensions.

Hope this helps, and good luck.

The plan to pay it back is for these mendacious fossils to be out of office when the brown stuff hits the fan.

These benefits are guaranteed by law. Where can the money come from to pay these obligations? Taxation of real property, taxation of residents’ income, or sale of State-owned assets. This simplifies the problem of available self-defense methods for Illinois taxpayers who are not members of enjoyong special protections granted by Illinois Political Industry. 1. Find novel methods of shielding real property from taxation. While methods which arguably are in violation of statute and municipal code are documented methods used by Public Figures, let us assume that Joe Public agrees to be held by a code which agrees to adhere to… Read more »

Is “TIF” Tax Increment Financing or an acronym for something else. Please provide details to your challenged admirers.

Yes tax increment financing, aka Beggar-Thy Neighborhood crony capitalism.
It is legal.
Why dont the Good Guys use it in self defense?
Bad guys dont want to reform TIF statute, it is too darn profitable so there it sits.

There is an elegant solution to ALL Illinois problems via whitehat implementation of TIF.

But you won’t tell us how it’s done?

Oh sorry I think I wrote my reply under the wrong article. It’s called,, Illinois taxtakers are an unstoppable force, what we need is immovable object: 1. Incorporate Illinois land into large Villages. ( because TIF can only be enacted in a municipality ). (Side benefit: protect groundwater vulnerable to corrupt County Boards’ control). 2. Write corporate charters to restrict corporate governance from public borrowing, and requiring any distribution of public money be made equally available to similarly situated properties. 3. Create a TIF-For-All encompassing every property in Village. 4. Draft TIF Agreement such that every property receives a rebate… Read more »

What will happen when this bubble does finally burst, and another recession hits? Just to reiterate; they are not keeping up on pension debt with a record stock market. This thing is a house of cards.

Wrong, IL will be one of the few blue states that actually goes (D) on election day. Most of the country will be red. Liz Warren is the only candidate worse than Hillary.

Keep an open mind on that. I think there may be dozens of indictments by then. Maybe voters will ignore that, but who knows.

The progressive wing of the (D) wants those corrupt Dem gone too. They just want to replace them with Democratic socialists. Heck, they want every D who isn’t pure enough gone. Rep. Rabbi Yehiel Kalish (D-Skokie) is 99.9% progressive and was backed by local progressive groups. He made the mortal mistake of voting ‘present’ rather than ‘yea’ on the Baby Killing Bill (the Reproductive Health Act). Because he’s a religious rabbi. And he voted for ever other progressive bill. This was too much for local progressive groups that supported his candidacy. They announced earlier this year that they intend to… Read more »

Latest news is that Michael Bloomberg may enter the race. Any thoughts on that.

Love to see him; third party if necessary. I think he should put a moderate Republican woman on the ticket.

Susan Collins, for example. Age about 66.

Or for geographic distribution in a big state that’s in play: Kay Granger of Texas. Age about 76.

Federal Bailout — count on it with a democratic president.

Lord, please use me as your tool to help my remaining Illinois loved ones. Give me the right words that they might leave a land of corruption to a place that still praises your name. Open my loved ones eyes as you have opened mine. Be merciful to those that stay and deserve mercy. Judge harshly those that speak lies and ignore truth. Lastly, thank you for Ted and Mark. Please guide their efforts and help them to remain humble. Amen.

January 20, 2021
Ted was on AM 560's The Morning Answer this week talking about how Illinois can save more lives by giving the elderly the COVID vaccine before any other group, the inconsistency of Illinois' destructive lockdown rules, and how Illinois' leadership doesn't appear to have any real plan to bring the COVID crisis to an end.
View Comments (5) | Add Comment