Wirepoints held a press conference on with Rep. Jeanne Ives (R-Wheaton), Rep. Tom Morrison (R-Palatine) and Allen Skillicorn (R-Crystal Lake) after testifying in front of the Cities and Villages Committee of the Illinois House of Representatives about Harvey, North Chicago, and the broader downstate pension crisis.

Wirepoints has performed an analysis of 180 Illinois cities with both a dedicated police and fire pension fund, examining their finances and their pensions. The findings, which will be released in a forthcoming paper, are alarming. Over the past 13 years – the time period for which individual pension fund data is available – finances have worsened dramatically in cities across Illinois.

Listed below are a sample of 20 cities with populations above 25,000 where pensions are wreaking havoc and putting pressure on city budgets. Overall, their funding ratios have either collapsed or remained near-insolvent. Many cities will see 20 to 25 percent of their general budgets consumed by pension costs next year. And taxpayers are putting in far more toward pensions only to watch their systems’ funding ratios fall. 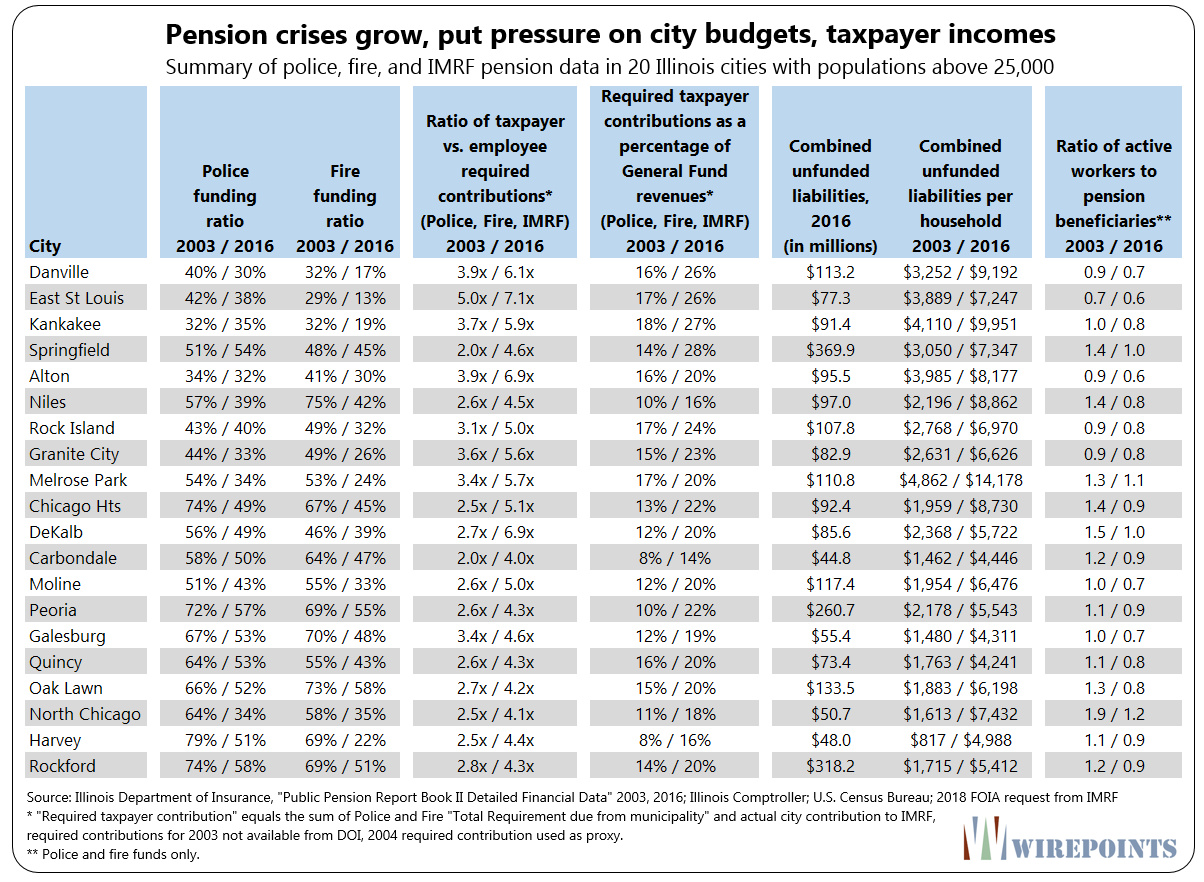 Read more about the crisis here:

Special Report – Beyond Harvey: Many Illinois municipalities running out of options

“Nobody is winning; everybody is losing” Wirepoints testifies before the House Committee on Cities and Villages

Why a bankruptcy option for municipalities is essential

Jesus what a bunch of dead beats. A better proposal every Illinois tax payer should take 20% out of their retirement fund to save the state.

I am looking forward to the full report…I think.

fantastic job-mark, ted & jeanne, thank you. where is the rauner camp on supporting your efforts?

For me the most frightening revelation in the press conference was when Jeanne described the Democrat and Republican legislators who got up and walked out prior to your testimony. They truly don’t care, and will allow the problem to fester until our economy and the equity in our homes are completely destroyed. Is it malice or stupidity that drives their heads into the sand? Please name those who refused to listen. They should be publicly shamed.

I felt the same way. That’s not unusual and sometimes there are legit reasons for doing so, but you’d think they’d understand this is important. I assure you they have no clue, just like 90% of the rest of the General Assembly.