Illinoisans will want to pay attention to how Ohio recently responded to its state retirement debt crisis. There, the Ohio Public Employees Retirement System board (OPERS) voted to cut health-care benefits for its 500,000-plus members to ensure its retirement funds don’t collapse.

In Illinois, that’s not even an option due to the Illinois Supreme Court Kanerva decision that says retiree health is protected pension benefit. All reforms are blocked in a state where workers get free retiree health insurance after just 20 years of work. Illinois has amassed $68 billion in unfunded health benefits owed to state workers, teachers and college employees. That’s on top of Illinois’ official $137 billion pension shortfall. 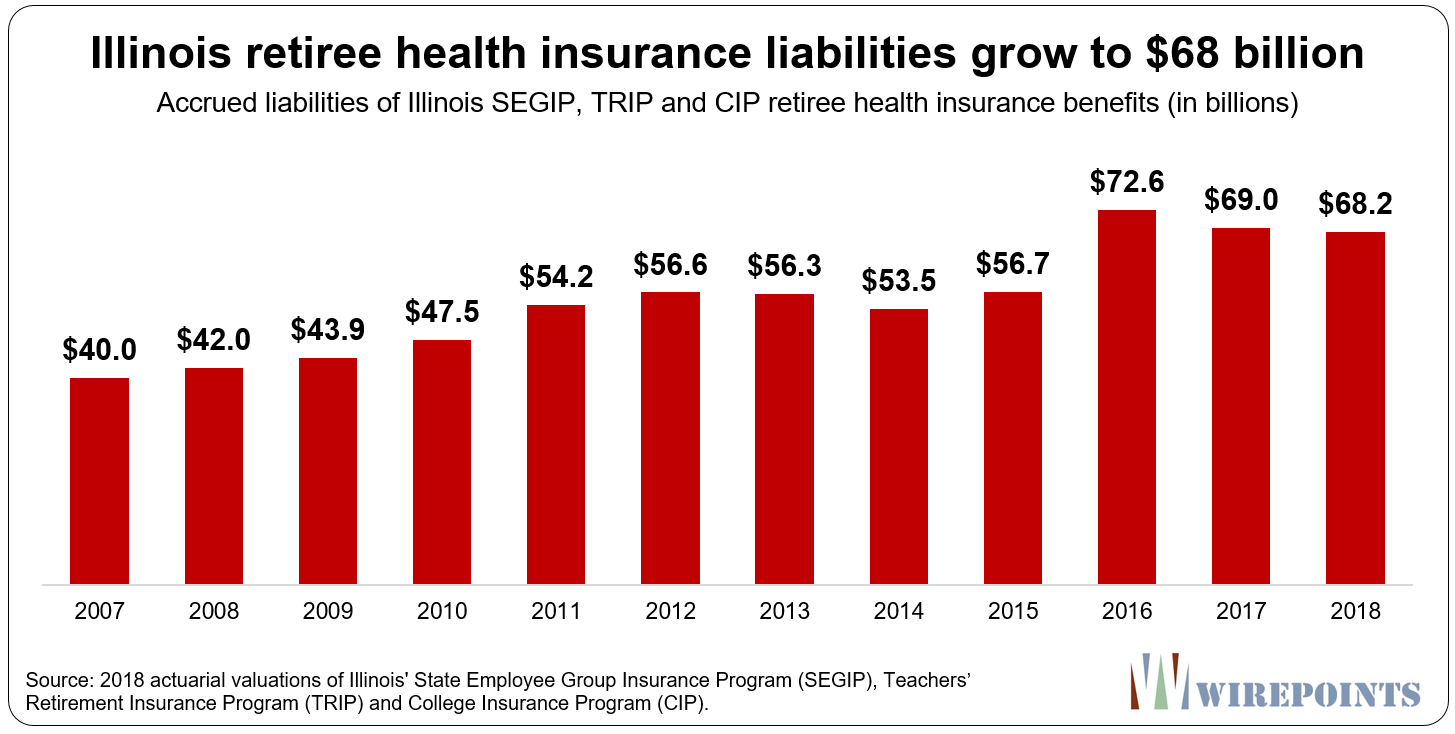 In contrast to Illinois, Ohio voted for reform to make sure the state keeps its pension system funded.

According to the executive director of the fund, there simply isn’t enough money to pay for both pension and retiree healthcare benefits. “The basic problem is we have no money to fund health care,” OPERS Executive Director Karen Carraher said.

From the Columbus Dispatch:

…The other major change was to eliminate the health care plan for retirees who aren’t Medicare eligible. Instead of paying 51% to 90% of their premiums, OPERS plans to give these retirees money to go buy insurance on the individual market.

These hits will be bigger. “Low service employees” will lose $329 per month on average, and everyone on the plan could see higher deductibles. The market average is about $1,100 more than what OPERS’ offers now.

In addition, Ohio will pour the state money that’s been going annually towards retiree healthcare into its pension fund instead. According to the state’s analysts, the health system has 11 years worth of funding stored up before it runs dry.

Illinois doesn’t have a financial buffer like that. The state pays for retiree health insurance on a pay-as-you-go basis, which means politicians haven’t set aside a single dime to pay for health benefits in the future. 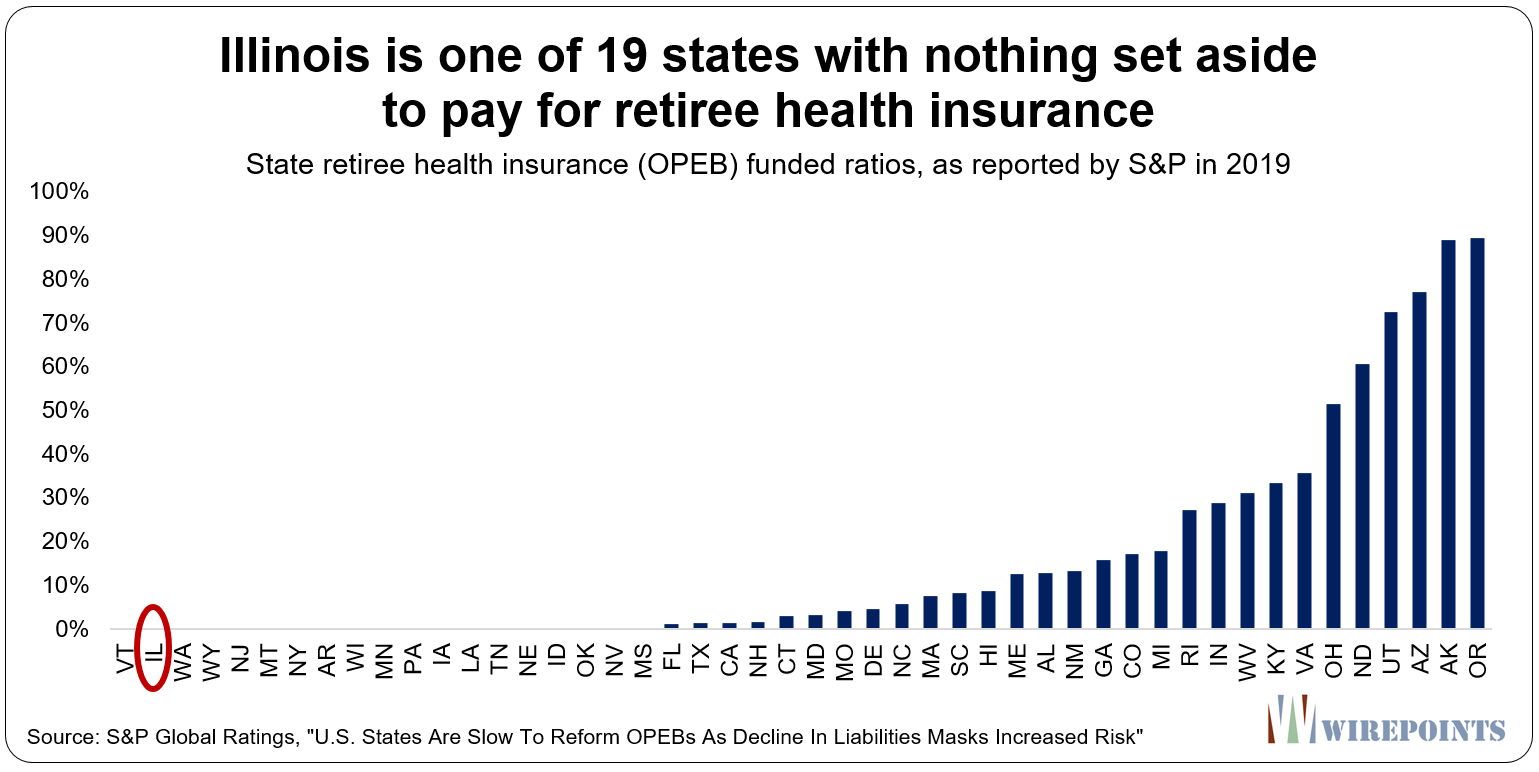 And with more than three-quarters of state workers getting free retiree health insurance, some as early as age 55, the shortfall continues to spike. Unfunded health insurance promises in Illinois, which totaled $40 billion in 2007, have jumped by 70 percent since then.

These debts will continue to play a larger role in Illinois’ overall retirement crisis as the bill comes due. Pay-go costs of more than $1 billion today are expected to jump to nearly $6 billion statewide by 2045. 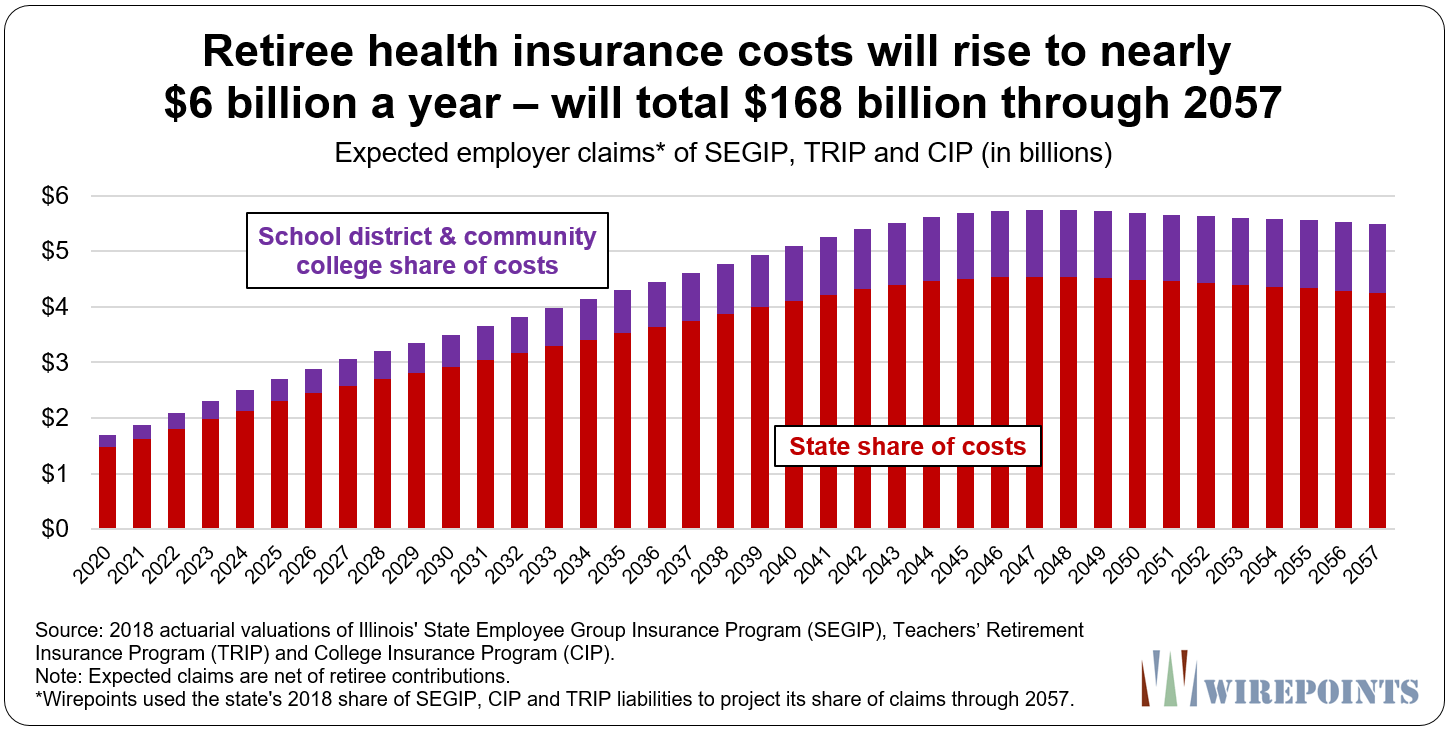 With a constitutional amendment to the pension protection clause, Illinois lawmakers could make changes like Ohio just did.

So while other states begin to dig themselves out of their crises, Illinois continues to fall deeper into its hole.

It is interesting in the chart that you show that state spending for state employees and retirees health care is projected to peak around 2047 and decline after that. Could the reason for this be that state employees hired prior to 1986 did not participate in Medicare and the state made no contributions on their behalf? I suspect that retirees like myself (hired in 1990 and eligible for Medicare) are substantially cheaper to carry than those who are not Medicare eligible due to the state’s decision not to enroll them and pay the employer share of the premiums.

Interesting, I never knew that factoid. I was a juvenile in 1986. But it makes sense.

You may or may not be following the appeal of this Kentucky intermediate appellate decision: https://www.nakedcapitalism.com/wp-content/uploads/2018/12/2018.11.30-Opinion-and-Order-re-MTDs.pdf I believe it has been argued before the KY supreme court and a decision is pending. This opinion says taxpayers as well as participants have standing to bring a case against fiduciaries who have mismanaged DB plan assets. Of course it does little good to sue public employees who are fiduciaries [unless there is liability insurance] AND taxpayer dollars would probably be used to defend such employees. However, absent Springfield consent for bankruptcy, could fiduciary principles be used to compel reduction of “excessive” benefits… Read more »

Funding the retirement benefits of tomorrow has a direct impact on the compensation of today. Want awesome retiree health care? Fine, but we’re going to fund it today using very conservative assumptions and the difference impacts your raise. There needs to be a re-education regarding the concept of public sector compensation. All these wonderful benefits have a cost. We are overpaying for today’s salaries and health benefits by underpaying tomorrow’s pensions and health care, which eventually leads to overpaying for tomorrow’s pensions and health care. We’re overpaying at every point in the compensation life cycle. There needs to be a… Read more »

Some local government boards in Illinois have approved extra retirement perks to certain employees and classes of employees which go beyond the state mandated pension and OPEB plans.

Public (un)civil servants are the new elite. They enjoy benefits which they have not contributed to.
They will continue to support higher taxes from which they are rewarded. Their divine rights to freebies such as high retirement pensions; free health and automatic annual raises is not enough.

“…OPERS plans to give these retirees money to go buy insurance on the individual market…” IANAL in healthcare, but my understanding was that under Obamacare, all health insurance provided by an employer must comply with Obamacare insurance regulations – such as including pregnancy coverage, free contraceptives, etc. If the employer didn’t provide a self-funded insurance plan, they could pay an employee’s premiums for an Obama compliant health insurance plan which covered all the Obamacare required treatment. However, they were prohibited from giving employees money to buy their own private insurance, because employers were either required to provide obamacare insurance, or… Read more »

Any type of cuts would never happen in IL. Politicians in the state receive major votes and campaign contributions from unions, so voting to cut benefits is not going to happen. Unions never should have been allowed in government employment (federal to local).

Most Americans don’t realize until it’s too late (when they get sick, or pass a certain age bracket triggering ACA health insurance premium rates higher than mortgage payments): Health insurance is not medical care!! Health insurance is an option contract, expiring monthly, which bears the right to purchase unknown medical services at nondisclosed prices. The underlying asset of the option/ financial contract known as ‘health insurance’ is a pool of non-obligated third parties who receive nothing directly from the buyer a priori. How can buyers be so naive as to demand services from a class of non-obligated providers who are… Read more »

Susan-Valid point. Check out on youtube John Stossel “The Education Blob Strikes Back” It was aired on 7-28-2013. At about the 15:45 minute mark they talk about teachers healthcare in Wisconsin and how then Gov Walker handled it.

To solve public benefit healthcare crisis,
And obviate teachers’ unconscionable prices,
They should all get requisite medical degrees,
And minister alone to their own maladies.

This may present a quandary,
For the Ed.Doc, M.D.;
Med doctors are needed as teachers’ tools,
Or who will teach teachers in medical schools?