Do a quick scan of the 255 new laws taking effect in Illinois on January 1 and it won’t take you long to realize that Illinois pols have done nothing to fix the state’s broader mess. None of those laws stop the Illinois’ deep fiscal dive and the record flight of its residents.

For sure, a few laws are easy to support, like the doubling of burial benefits for first responders killed in the line of duty. But the majority just take care of special interest groups or add mandates to Illinois’ already inefficient governments. And the stuff that affects everyone – from property tax relief to pension reform to local government consolidation – is nowhere to be seen.

I’m not recommending you take out hours of your last precious days in 2019 to read a bunch of laws. Fortunately, ABC7 compiled a short description of each law so you can give them a skim. I’ve linked them at the end of this piece.

Yeah, there’s the new cannabis law everyone already knows about. Minimum wages are going up to $9.25 from $8.25. And there’s also new licensing requirements for Chinese Herbologists and a “Healthy Pet Month” designation for the month of April.

But pensions? They are mentioned just six times in the ABC7 summary, but not as part of any reform. One law says pension five times, but it’s just a broader bill on unclaimed property within the retirement funds. The sixth time the word pension was mentioned was only as part of the longer word sus(pension).

Overall tax relief? The opposite. Expect to pay more as there are lots of new fees, mandates and regulations.

Collective bargaining reforms to lower the cost of government? Expect the public sector unions to have more power over the ordinary Illinoisan. And that means higher costs at the state and local levels.

Illinois politicians continue to categorically reject new laws that structurally change how this state works. Gov. J.B. Pritzker refuses to even consider an amendment to the pension protection clause.

That’s in sharp contrast to what’s been going in Illinois’ neighboring states where for years they’ve passed labor and budget laws to make their states more competitive with the rest of the nation.

They’ve taken on the tough issues – right-to-work-laws, collective bargaining reform and tax cuts – understanding that short-term political pain would result in longer-term gains for their residents.

How’s it working for those states?

Two graphics broadly capture the results. One measures the credit rating of each state – the equivalent of a credit score. Illinois is the fiscal deadbeat of the country, bar none.

In contrast, Iowa, Indiana and Missouri have the best rating possible, AAA. Wisconsin and Michigan have the second-best credit rating. Only Kentucky’s rating is lower, a function of their own pension debacle. 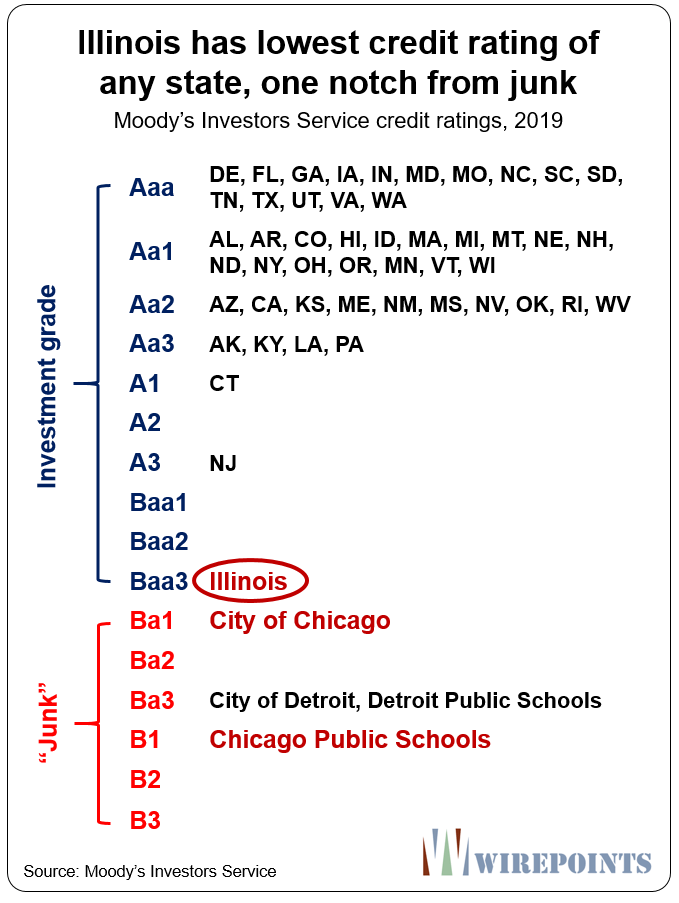 And in the measure that captures it all, Illinois is the nation’s biggest loser. Illinois can’t retain its people.

No other state has lost more people cumulatively since 2010 than Illinois. By comparison, all of the state’s neighbors have grown, including cold-weather states Michigan and Wisconsin. 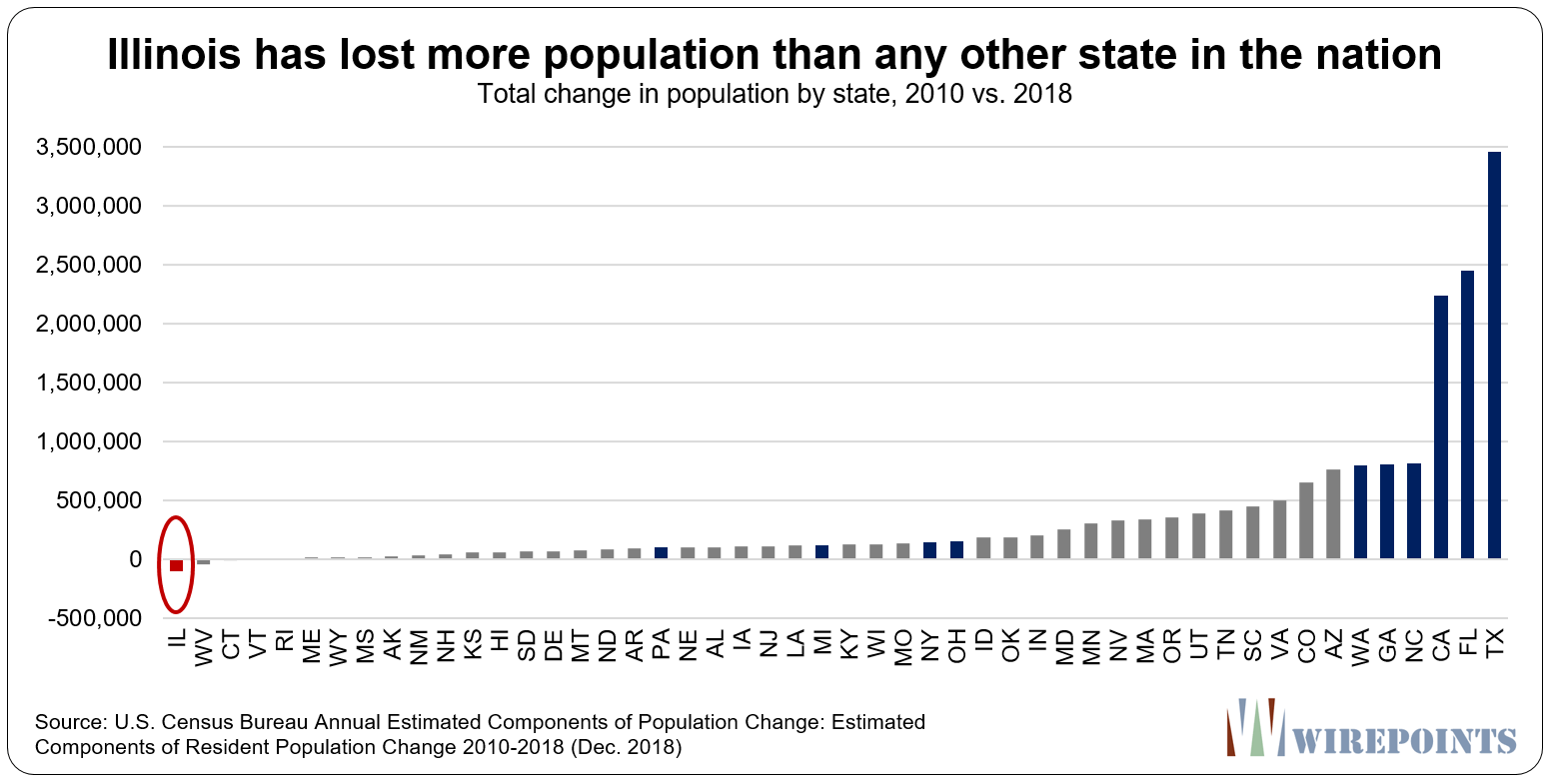 The above graphic should drive virtually every single decision made by Illinois politicians.

Does a new law attract more people, businesses and investment to Illinois? Or does it repel them?

In putting together the new laws for January 1, they’ve ignored those questions yet again.

Unfortunately, Illinois pols will be at it again in 2020. They’re pushing a multi-billion dollar progressive tax hike – and no reforms – as their panacea for all of Illinois’ woes.

Read more about Illinois and its fiscal crises:

The best day of your life is the day you move out of Illinois.
There is no hope, DOA, a goner.
Let the cops, teachers and firemen pay all the pension taxes.
Do not be the last man to move.
The race is on to get out of this hell hole.
HIGH TAXES, LOW SERVICES AND some of the worst weather in the US.
You and your family deserve much better.

Considering moving out of state also. Corruption is out of control. Democrats could care less about Illinois, on it way to becoming California. Prosecute corruption, put term limits in place. If legislators won’t listen to the people, put proposed legislation on ballots and WE will divide our own fate.

Indiana welcomes you with open arms, low taxes, better services and fiscally responsible government that works for We The People

How about this? Next law should be “Make No More Laws”

250 New Laws by the Democats that either Raise Taxes, Lower Your Standard of Living, Increase Regulation hurting business competitiveness, Infringe on personal freedom, or Force to accept Radical Liberal ideologue.

a new law created for every business day of the year… what a joke!

The people that leave Illinois are the taxpayers; this increases the population’s percentage of Government workers and the free stuff army meaning next election will assure the same people will be elected.
Merry Christmas.

As infuriating as Illinois is, I’m thankful that I can come here and vent with intelligent people who “get it.” Perhaps one day our voices will make a difference, but until then, it’s nice to commiserate with like-minded people.

Stay healthy and safe, and I wish all of you happiness during this season and beyond.

Amen. Thank you for that.

Well said. May clarity and wisdom be a 2020 blessing upon all remaining Illinois residents.

I agree. Although I dont think in my lifetime it will get any better I do hope it does for my grandchildren. Spread the word on social media about Wirepoints and maybe, just maybe it will open more eyes. Here’s to a health happy New Year to all who work to expose this state. And you know the ONE law I would love to see first is term limits followed closely by a law to stop anyone from taking lobbyist money. Pipedreams

February 21, 2020
A plain English explanation of why Pritzker is wrong about a state constitutional amendment for pension reform.
View Comments (32) | Add Comment